Kia is issuing a recall affecting about 28,000 units of the 2016 Sedona minivan and Sorento SUV models. A small percentage of the vehicles being recalled – around 1 percent, according to Kia - are equipped with a defective part within the locking system active when the vehicle’s gear shifter is placed in the Park position, which could allow the gear selector to be moved without the driver applying the brake.

If the lever is moved accidentally and the vehicle is not on flat ground, it could start to roll away.

The good news is that the company has already identified the problem, which lies with the shifter locking system and its bracket. These parts keep the transmission locked in “Park” unless the driver applies pressure on the brake pedal. The affected vehicles were built with unapproved components from a third-party supplier. As a result, it is possible to move the gearshift lever out of Park without pressing on the brake pedal, even if the ignition is not on. Kia says there have been no injuries or fatalities related to this issue.

Kia will notify owners by mail beginning October 7, 2022. They will be asked to visit their dealer to have a technician inspect the entire system. They will replace defective parts if necessary. Owners who have already paid to have the problem resolved may receive a refund.

In the meantime, if you own a 2016 Sedona or Sorento, Kia suggests using the parking brake, at all times. 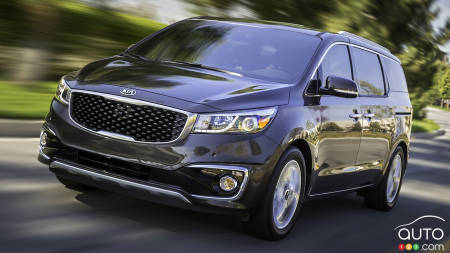 Kia is issuing a recall of older versions of older Sedona minivans and Sorento SUVs. The small risk of a short circuit that could spark a fire in the engine ...

Hyundai and Kia are advising nearly 300,000 owners of Palisade and Telluride SUVs to park their vehicle away from structures due to a fire hazard, which stem...