When Genesis introduced its new G80 recently, this after rolling out its first SUV the GV80 earlier this year, the Korean luxury automaker gave us our first good look at the design signature all of its models will follow going forward. There was little doubt that before long, the brand’s G70 compact sedan would inherit the same visual elements.

Yesterday, Hyundai's luxury brand officially unveiled the new face of the model for the 2022 model-year, and sure enough it confirms what we already knew, namely that its styling is now in line with that of the new G80.

And that's far from being a bad thing, because the brand's new signature is quite successful, with its dual headlights that will be unmistakable on the road. The latter, called Quad Lamps, are the heart of this new image, as is the huge front grille that sits between.

In profile, the G70 inherits two horizontal lines (top and bottom) that add to the muscular character of the design. However, the G80's dual LED turn signals have been replaced with side air extractors, which the company promises are more efficient. The new G70 also inherits redesigned wheels. 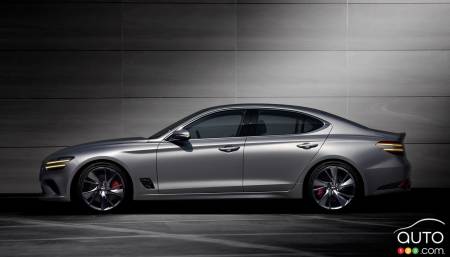 Out back, the headlights are redesigned to reflect the headlights’ signature, while the trunk is curvaceous and features a spoiler. Two oval-shaped exhaust tips and body-coloured diffusers dominate the presentation here. 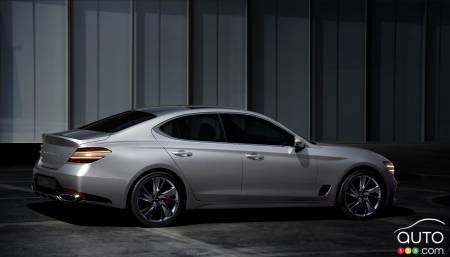 Inside, the next G70's interior refresh includes a driver-focused display, as with the new G80. Most importantly, however, it includes the latest connectivity options. A new multimedia system is accessed via the 10.25-inch screen inhabiting the centre console, and it features a spectacular interface. The wireless smartphone charging pad has also been updated to accommodate larger phones. 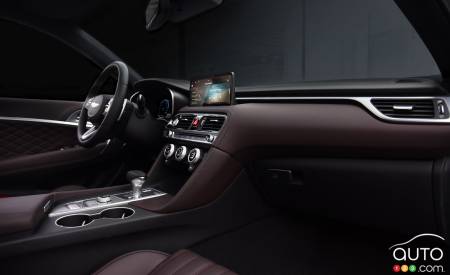 No details about the powertrain have been revealed yet, but there have been rumours the manual transmission might be on its way out. This past July, a company spokesperson reported that in the past year, the company had sold only about 100 versions equipped with a mechanical gearbox. We'll know more about that as the model's official debut in Korea next month approaches, but fans of the manual shouldn’t get their hopes up.

As far as the North American market is concerned, the 2022 Genesis G70 is expected to debut at some point in 2021. 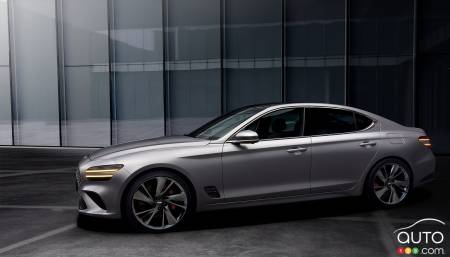 The 2021 Genesis G70 KOs the competition when it comes to bang for buck but delivers too little status for some, hence its inability thus far to garner the k...