Electric vehicles will be multiplying like rabbits on the next few years: it’s a prediction that’s almost getting stale so often is it repeated. Be that as it may, various announcements by manufacturers big and small are coming fast and furious; dozens of electrified models are confirmed, and that will soon swell into the hundreds.

This trend has made itself felt in every segment of the industry. Well, almost every sgement. We have yet to see a fully electric muscle car, for example. Nor, unfortunately, a pickup.

That looks to change in the near-future. The first move in that direction comes not from a major manufacturer from a small American firm based in Plymouth, Michigan (how aptly named a location is that…). The company is Rivian, and it has just lifted the veil on an electric pickup that it comes to bring to market in the “near-future”.

The vehicle will actually be on display in the flesh at the Los Angeles Auto Show this week, so we’ll have the chance to check it out up close. 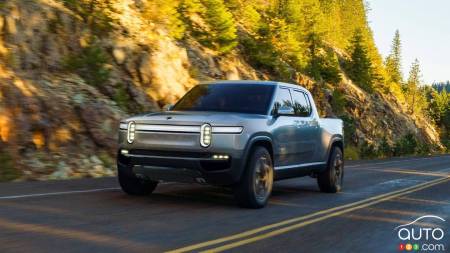 The fully electric truck will come with three different battery configurations. A 105 kWh unit will provide 370 km of range, and another 135 kWh pack will increase that to 480 km. At the top of the range, and this is the news that got tongues wagging at the unveiling, is a 180 kWh battery unit that allows for a range of 640 km on a full charge.

This, to be sure, is what consumers have been waiting for. What’s more, because of this top-end battery’s capacity, it gives the R1T truly jaw-dropping 0-100 km/h acceleration, according to the manufacturer. This isn’t a stat normally brought up when discussing a pickup. So how long will it take a suitably equipped R1T to hit that milestone? A measly 3 seconds of so.

Also worthy of note is the placement of the batteries; they will sit within a skateboard-shaped  structure that runs along the length of the vehicle. The advantages of this are clear: the bed keeps all of its space, and since there’s no combustion engine under the hood, there’s an additional 330 litres of cargo space there. 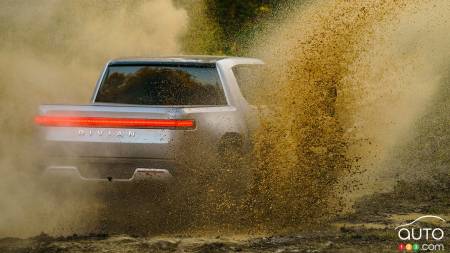 Yet more cargo space is designated under the vehicle, along most of its length. This space totals 350 litres and is designed to allow for transporting very long objects.

Within the cabin things are less sharply defined, the vehicle still being in the concept phase. We can say that the presentation is futuristic, but who knows how much of that will survive the progression to a production model.

The Rivian R1T is being given a starting price of $61,500 USD. Rivian expects to begin delivering the pickup in 2020, and those first models will get the biggest battery pack… and heftiest price tag. Seems the company has taken a page from the Tesla marketing strategy.

The manufacturer has started taking $1,000 deposits from buyers wishing to reserve their R1T. If you’re wondering where the Canadian market fits into all this, there’s no mention of any distribution on our side of the border just yet.

We’ll be snooping for more info at the Los Angeles show this week. 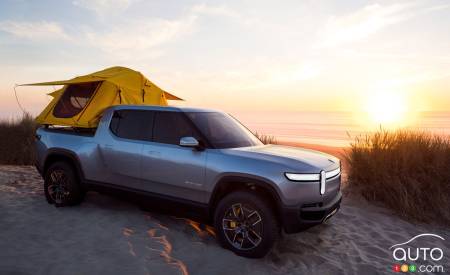 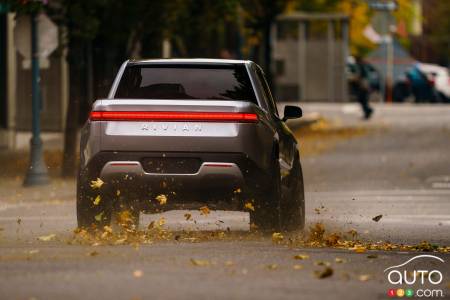 Rivian confirmed this week that the new all-electric R1T pickup truck currently in testing will get a tank turn feature, which will allow drivers to turn the...

Articles By
Daniel Rufiange
2021 Volvo S60 T5 Review: The Last of Us
Review
End of the Line for the Toyota Avalon
Article
Volkswagen Previews All-Electric ID.5 Coupe-S...
Article
More from this author