After a few delays and after the assembly of pre-production models, the first Rivian to go into actual production rolled off the assembly line yesterday morning at the company's plant in Normal, Illinois, driven by company CEO RJ Scaringe.

So Rivian has won its bet. The fledgling electric vehicle company becomes the first manufacturer to bring a non-combustion engine pickup truck to market, beating out Tesla, General Motors (GM) and Ford, among others, in a segment that promises to see many models in the coming years.

Rivian’s founder and CEO, RJ Scaringe, had this to say yesterday when announcing the production of the model on his Twitter account:

“After months of building pre-production vehicles, this morning our first customer vehicle drove off our production line in Normal!  Our team's collective efforts have made this moment possible. Can't wait to get these into the hands of our customers!” 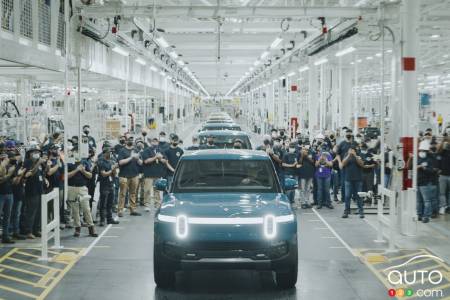 Photos shared by the executive show workers celebrating the moment, surrounded by several other units nearly ready to roll off the line.

A company spokesperson confirmed that the vehicles being produced are for sale. She declined to elaborate on the company's plans for ramping up production, including how many trucks were produced Tuesday or who will be the first customers to receive them.

The start of production comes weeks after Rivian, backed by Amazon and Ford, filed for an initial public offering.

The R1T won’t be alone in its segment for long, of course. Rivian’s EV will be followed in short order by several other pickups running on electric power. GM is expected to launch its GMC Hummer EV this fall, potentially followed next year by Lordstown Motors, Ford and finally Tesla, which recently pushed back the commercial launch of its Cybertruck from this year to late 2022.

Within a few years, the transformation of the segment will be well underway.

The latest video showing the Rivian R1T in action takes us to the water. The EV maker was testing the truck’s immersion and waterproofing capabilities, and f...

The Debuts of the Rivian R1T and R1S Are Delayed Again

Rivian has announced to its customers that its first two vehicles will see their debuts slightly delayed, once again. This time, the fledgling automaker is t...