Rivian's first vehicle, the R1T pickup, is scheduled to arrive in late September. After a few delays, the company says it is now on track to stick to that launch schedule. The wait for the EV is almost over, it appears.

To whet our appetites further, Rivian CEO RJ. Scaringe has released another short video showing the R1T in testing. Previously we’d seen the truck performing tricks on the track and out in the desert, but this time it took to the water. The latest video is designed to show how adventurous future owners to take on deep water with their ride.

The idea of the latest test was to demonstrate the vehicle's immersion capacity and also its waterproofing. And, obviously, because it doesn't have a combustion engine that needs to breathe, the R1T can venture deeper than other trucks.

Rivian says the test saw the truck roll through water deep by over three feet, or around one meter. Whatever the exact depth, it's impressive to see the truck driving through so much water. 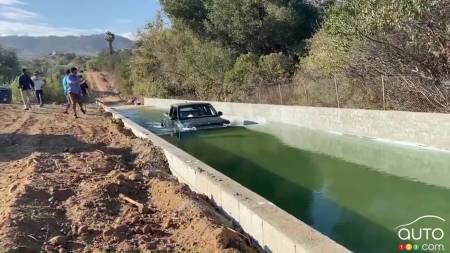 As mentioned, the feat is best measured with an understanding of the EV’s design. But for those who want an off-roader to have fun with, this is another sales pitch for the R1T.

Initially, the R1T will come in a version offering 483 km of range will be offered. Next January, a version with an even longer range of 644 km will be launched. Later, a more affordable model will be introduced with a 402 km range.

The vehicle will also have a towing capacity of 11,000 lb; it remains to be seen how towing a large load will affect the range.

That's one of the many elements we look forward to testing out on all the electric pickups expected in the next few years. Interesting times… 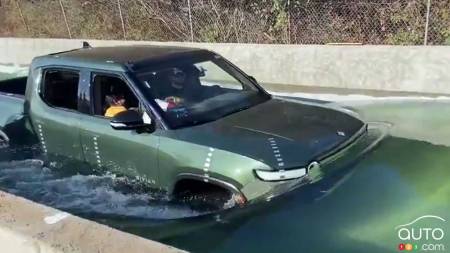