2019 Santa Fe
The heavily redesigned new Santa Fe SUV will again be offered in two configurations – five-seat or seven-seat – though the nomenclature has been simplified with the XL and Sport designations no longer in use. The first of those configurations will come with a 2.4L 4-cylinder GDI engine (185 hp) or a 2.0L turbo (232 hp), the second with a 2.2L turbo-diesel. At the same time, Hyundai revealed that it plans to introduce hybrid and plug-in hybrid versions of its popular utility model in the near-future. At the moment we don’t know what ‘near-future’ means exactly, nor is it clear that the Canadian market will see those electrified powertrains.

Now larger and longer than before, the new Santa Fe still sports the signature Hyundai cascading grille, along with LED daytime running lights placed atop the duel LED headlights. The interior has been upgraded with premium materials and a new horizontally based layout, highlighted by a new touchscreen featuring Android Auto and Apple CarPlay compatibility. We’ve got more details here on the next-generation Santa Fe, which was first revealed in a pre-premiere two weeks back in Seoul. 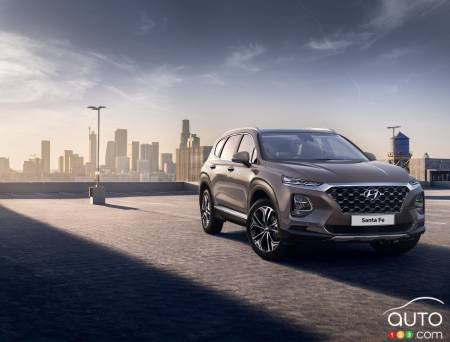 Kona Electric
Also making its first public appearance in Geneva is the new all-electric version of the new 2018 Hyundai Kona subcompact SUV. Built on an entirely new platform that enables incorporating a battery system without compromising on passenger space – a valuable quality in a subcompact – the Kona Electric can be charged to 80% in under an hour when using a DC fast charger. Stylistically, the Electric distinguishes itself from its Kona brethren mainly with its distinctive closed grille, which not only looks cleaner and sleeker but improves aerodynamics. We’ve got more on the Kona Electric here.

Le Fil Rouge!
The Santa Fe and Kona Electric are all fine and good, but the car grabbing some serious attention at the Hyundai stand in Geneva is the company’s radical new Le Fil Rouge concept car. This bullet-shaped design study (thematically called “Sensuous Sportiness” by the company) is intended to showcase the future design direction the automaker will be taking in the years to come. The idea is to amalgamate past, present and future design elements into a seamless whole, one that integrates the latest developments in aerodynamics, technologies and automotive architecture. It makes for an incredibly sleek, pleasing shape, and we can only hope that as much of Le Fil Rouge’s exterior and interior design elements as possible make it into an eventual production-ready vehicle. 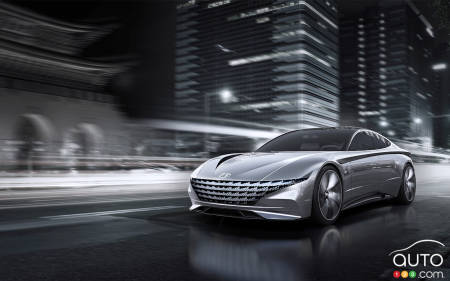 Montreal’s renowned International Jazz Festival was the setting last week for the presentation of two highly popular new models from Hyundai, including the a...