On the menu, (a little) more electrification and lots of SUVs and crossovers to choose from Automotive columnist: Vincent Aubé , Updated: 2023-01-04 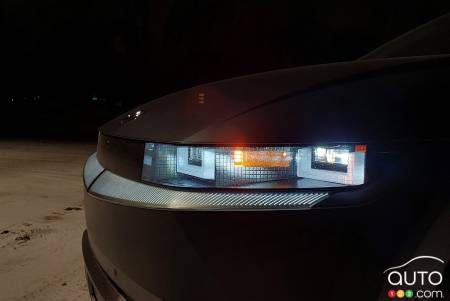 Hyundai, we find ourselves repeating, has been on a roll in recent years. And what's in store from the Korean automotive giant in 2023? Unsurprisingly, here like elsewhere, the car is still in decline, especially when it comes to the group's midsize entry, the Sonata sedan.

For its part, the Elantra is tasked with attracting customers on more of a budget. And there’s a new player in the game this year, with Hyundai introducing a second Ioniq-branded model, the all-electric Ioniq 6 sedan, to give company to the Ioniq 5 crossover that launched a little over a year ago.

As for the SUV offering, it remains essentially the same, despite a few noteworthy changes here and there.

Here's what's in store for Canadian consumers this year from the Hyundai brand. 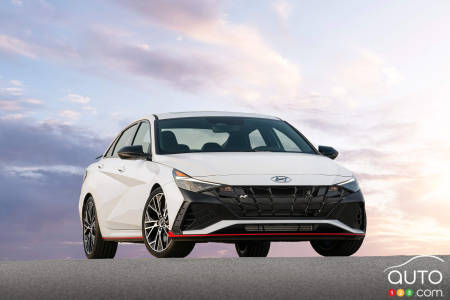 The Elantra compact sedan is now the gateway to the brand. With the removal of the manual transmission from the offering for Venue urban crossover, the Elantra is now the most affordable vehicle in the lineup in 2023. Of course, that is a base model Elantra, with a combustion engine and no electrification or power gains.

The Elantra is available in four trim levels: Essential, Preferred and Luxury, which can also be equipped with the optional hybrid powertrain, as well as the N Line Ultimate, which swaps the base engine for the 1.6L turbocharged unit. Its equipment is more complete and the drive it offers is sportier.

That said, no Elantra comes close to the Elantra N, the high-performance sedan that replaced the former Veloster N as the brand's performance champ. With its 2.0L turbocharged 4-cylinder engine and two transmission options - yes, there's a 6-speed manual unit - the sportiest Elantra is here to paste smiles on drivers’ faces. 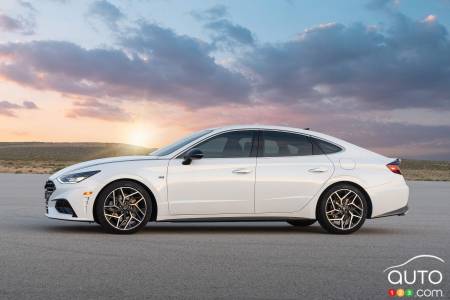 Even as the brand's midsize sedan improves year after year, it can't escape the SUV wave that has been drowning car segments for a decade now. Even a household name like the Sonata is threatened with extinction. We'll see if the rumours of its pending retirement prove to be true.

For 2023, though, it’s all good. The Sonata is offered in four trim levels, and with four distinct engine options. The Preferred trim comes from the factory with a naturally aspirated 2.5L 4-cylinder, and the Sonata Sport switches to a 1.6L turbo 4-cylinder. Next, the Sonata N Line is sportier with its 2.5L turbocharged 4-cylinder, while the Ultimate Hybrid closes out the lineup with its 2.0L gasoline engine and hybrid system that reduces emissions and fuel consumption.

While overall, Hyundai's SUVs continue to lead the way for the brand in Canada, the big news for 2023 comes in the form of a car, one with a rather unique profile. The Ioniq 6 is the second model to come from the all-electric Ioniq sub-brand after the Ioniq 5.

Hyundai's new BEV has a very different style than the small electric SUV, even though the to models ares based on the same architecture and deliver similar efficiency and performance figures.

As well, an Ioniq 6 N is also expected in the next few months, hot on the heels of the Ioniq 5 N also set to enter the high-performance electric SUV arena. 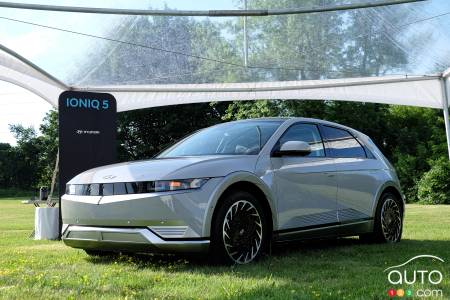 Hyundai's most angular SUV (you could reasonably call it a car if you want to) offers no gas-engine options under its hood. This is conceived and designed as a purely electric vehicle from the ground up.

The entry-level Preferred model comes with a single engine on the rear axle and a range of 354 km according to RnC (Natural Resources Canada) estimates.

The vehicle is also available in Preferred Long Range, which comes with a larger 77.4 kWh battery (compared to 58 for the base version) and a possible range of 488 km.

Then there's the Preferred AWD Long Range model, which grafts a second engine on the front axle for all-wheel drive. Note that you can always check the Ultimate option to add a touch of luxury to the electric SUV.

See also: 2022 Hyundai Ioniq 5 Preferred Standard Range Review: Are the Savings Worth It? The 2023 model-year will be the last for the first-generation Kona. Hyundai recently lifted the veil on the outline of the second-generation Kona, which, unlike the outgoing model, will be available with a hybrid powertrain under the hood.

But for 2023, the Kona is back with no major changes. It's still available in three trim levels and with two engine options in its combustion engine version, either a naturally aspirated 2.0L 4-cylinder or a 1.6L turbo for the N Line AWD model.

The explosive Kona N performance variant leaves the factory with the same engine as the Elantra N, a turbocharged 4-cylinder good for 276 hp and 289 lb-ft of torque connected to an 8-speed dual-clutch unit and all-wheel drive. This utility vehicle is only available in one version.

Finally, the Kona Electric is available in either Preferred or Ultimate trim levels, both of which are front-wheel drive models, remember.

Chances are you'll never see this car on the road. The Hyundai NEXO is as rare a bird as the only other car from a major brand that uses hydrogen to run its pure electric powertrain, the Toyota Mirai.

But it’s in the lineup just the same. Hyundai offers Preferred and Ultimate trim levels, the latter of which is better equipped. Launched in 2019 (as a 2020 model), the big Hyundai Palisade gets its first major redesign, and the least we can say is that the facelift given the Kia Telluride's close cousin is... pretty good. The front end of the vehicle looks particularly improved when compared to the outgoing SUV.

Pending the arrival of the all-electric Ioniq 7, the Palisade is the only true three-row family option in the automaker's lineup. Available in three trim levels - Preferred, Urban (with a darkened touch) and Ultimate Calligraphy, the 2023 Hyundai Palisade is also more comprehensively equipped than ever. It’s a strategy Hyundai has followed since it arrived on the Canadian market in the 1980s. 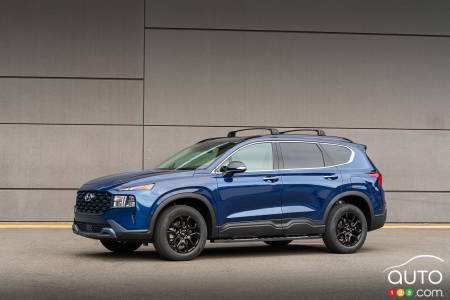 The very first SUV to wear the Hyundai badge is still in service, even as it’s been joined by a full range of both larger and smaller models. The Santa Fe is, like its little brother the Tucson, an SUV that can be ordered with a gas, hybrid or plug-in hybrid powertrain.

The hybrid option hasn’t been as popular with consumers, and that’s reflected in the offering. The automaker offers only the one Luxury Hybrid trim level, with a 1.6L turbocharged 4-cylinder engine and a 6-speed automatic transmission to make it go. All-wheel drive is also standard.

Finally, the plug-in hybrid option is also only available in one level, Luxury Hybrid, but you have to pay an extra $4,600 to get the plug-in hybrid powertrain. On the other hand, it gives you access to government EV discounts and a longer range in electric mode! 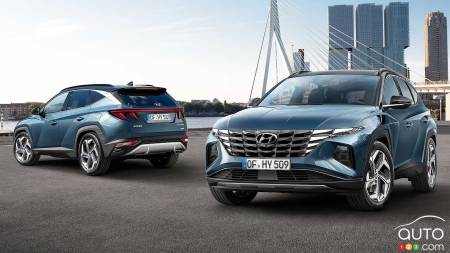 The two electrified options (hybrid and plug-in hybrid) are both available in Luxury Hybrid or Ultimate Hybrid. Both versions of the Tucson use the same 1.6L turbocharged powertrain as in the Santa Fe. The 2023 model-year is when the entry-level Venue drops the manual transmission for good. That's right, the IVT (for Intelligent Variable Transmission) is the only option, and it manages the small 1.6L 4-cylinder engine’s power only via the front wheels.

The Trend variant has also been retired, leaving the consumer with three choices: Essential, Preferred and Ultimate.

THE (ONLY) PICKUP TRUCK

The Korean automaker is finally represented in the fairly niche leisure-pickup segment. Hyundai Canada's offering is even more so than Ford's Maverick, available in several different liveries. Note however that in Canada, Hyundai chose to leave off its roster more basic trims of the pickup, unlike in the American market where a naturally aspirated engine is available.

Here, only the 2.5L turbocharged 4-cylinder engine is offered, and it comes with an 8-speed automatic transmission and all-wheel drive as standard. Note that the Santa Cruz is richly equipped, whether in Preferred or Ultimate trim.

See also: The 2022 Hyundai Santa Cruz, or The Truck for Those Who Don’t Like Trucks That Much 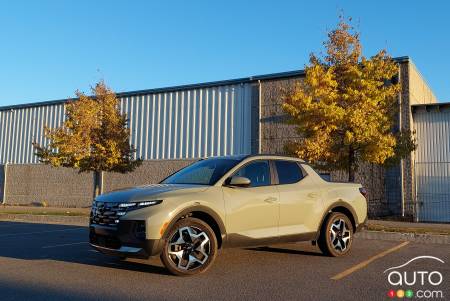 Consult as well our our other 2023 model-lineup overviews:

Effective now, Hyundai Canada’s new rebate program for Canadian military includes up to $1,500 off the purchase or lease of a new Hyundai vehicle after taxes.

Fans showed up in numbers at the 2023 Montreal Auto Show, but organizers will have to offer them better in 2024. Many came away disappointed from their visit...