As reported by LUXGEN

LUXGEN, the first automobile brand from Taiwan, has successfully finished its international debut in 2009 Dubai Motor Show, and further illustrates Taiwan’s R&D strength to the world through its subtle combination of information technology and the auto industry. Mr. K.C. Hu, CEO of LUXGEN pointed out, “Taiwan’s IT industry has been highly acknowledged around the world, and we aspire to capitalize on that strength as an automaker and promote a Taiwanese auto brand on the global stage.”

The LUXGEN brand was established by the Yulon Group to merge Taiwan’s highly advanced auto and information technology industries to create a new generation of forward thinking, environmentally sustainable ‘intelligent’ vehicles. “IT+AUTO+ET”, its core branding message, is what differentiates LUXGEN and best illustrates Taiwan’s R&D strength in the global market.

LUXGEN is targeting emerging markets around the world including the Middle East, Central America, Russia, China and South East Asia. Among them, LUXGEN has chosen to focus on the GCC states as its initial launch platform and has already signed letters of intent with a number of dealers in the region.

Two technicians from Canadian Honda/Acura dealerships are among the finalists competing in a global-scale contest to determine who is best at their professio... 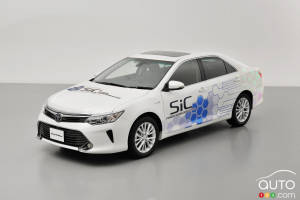 Toyota will bring a brand new technology to the streets of Japan for testing this year using a Camry hybrid prototype and a fuel cell bus.