On a day dubbed Battery Day at Tesla, the company's big boss, Elon Musk, presented a video of the new version of the Model S sedan, the Plaid. The video shows the Plaid recording a time of 1 minute 30 seconds at the Laguna Seca racetrack in California. Let's just say that it appears to be rather fast.

Musk gave the variant’s 0-100 km/h acceleration at under two seconds. For the quarter mile, we're talking about a time under 9 seconds, which is completely staggering.

The Plaid version comes with three motors and all-wheel drive. According to Elon Musk, it will also deliver a range of 837 km and a power output of 1,100 hp. That's more than the 832-km range forecast announced by the U.S. Environment Protection Agency (EPA) for the Lucid Air unveiled last month. You want more crazy numbers? The Tesla Model S Plaid will also be able to reach a top speed of 322 km/h. 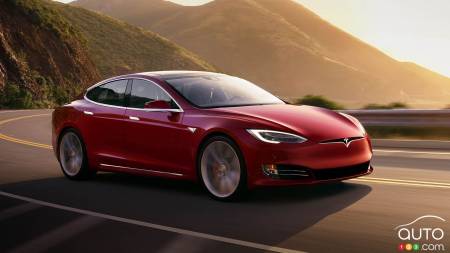 Speaking of crazy numbers, the car is priced at $139,990 USD, which limits its access to those with outsized budgets of course. On the manufacturer's Canadian page, the Plaid appears for $189,990 CAD.

Fortunately for most of us, the company's founder also announced his desire to offer a more basic version of the Model S for $25,000 USD, though that won’t happen for another three years.

Tesla is working hard to produce new batteries that will be more efficient and cheaper to produce. In the world of the electric car, that's the heart of the matter, plain and simple. Once costs are minimized, electric vehicles will be available at the same price as their gasoline-powered counterparts. Along the way recharging times are bound to melt away, and with increased range capacities, the electric car will then have all the tools it needs to finally make its mark.

We’ve said it before: over the next decade there will be some revolutionary changes in the electric-mobility domain.

Tesla is making several changes to its Model S. For one, the interior gets an even more futuristic interior and for two, a variant offering 837 km of range i...

Tesla Model X: The Sound of Silence at 250 km/h

What does a 250 km/h drive in a Tesla Model X look like? Very little. Check out this video of a Model X P100D hitting its allowed top speed, shared by TopSpe...