Toyota is cutting production targets again, with 50,000 fewer units set to be assembled in October.

History is repeating itself at Toyota this year. The company's monthly production forecasts have had to be lowered more than once, mainly because of the shortage of electronic microchips.

The worst of the crisis seems to have passed, but it will take a while before things get fully back to normal. Toyota has revised its production targets to 750,000 units for October, as opposed to the 800,000 that had been planned - and announced just last week. That represents a reduction of about 6.3 percent. Analysts believe the situation will be similar in November and December.

Toyota's decision worries some, as it means the chip shortage could continue through the end of 2022, or even extend into the early months of 2023. 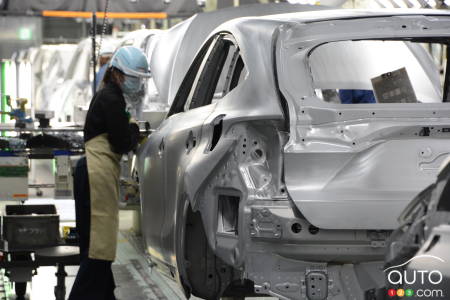 Toyota said this week that its production target of 9.7 million vehicles for the current fiscal year (April 1, 2022 to March 31, 2023) has not changed. The company also said it will suspend production at 10 assembly lines inside seven plants in Japan during October, affecting models such as the RAV4, Camry, Prado and GR Yaris, as well as the Lexus NX, LS, ES, RX and UX.

Ironically, the company also this week confirmed production increases compared to the same period last year and also to last month, which does means that production is picking up pace. Toyota increased its global vehicle production by 44.3 percent in August compared to last year. It was also the first month-to-month increase since March, when the industry was recovering from the pandemic and production capacity was increasing.

The main uncertainty remains two-fold: the uncertain outlook related to the global chip shortage, and the continuing COVID-19 outbreaks that still have the potential to slow production in some plants around the world.

Toyota reduced its production once again in July

Afflicted from every angle, Toyota had to reduce its monthly production last July. Despite this, the company is maintaining its annual plans... provided that...

Toyota has announced a reduction in vehicle production in June, once again due to what is happening in China in response to Covid-19. Containment measures re...