A new promo video released by Australia’s Qantas Airlines shows one of its new Boeing 787-9 Dreamliners being pulled across the tarmac at Melbourne Airport by a Tesla Model X.

According to the airline, it’s the first time a passenger airplane has been towed by an electric-powered passenger vehicle.

The Tesla Model X tasked with the job of hauling the massive plane was a P100D edition, the most powerful Model X available; it can generate 503 hp and an astounding 487 lb-ft of torque. 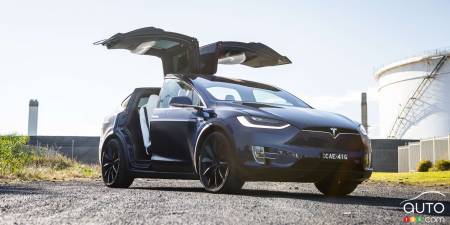 Of course, the principle of pulling such a weight is similar to that of a train: it’s all about momentum. Once a plane, even as heavy as the Dreamliner, can be put into motion, pulling it is a relatively simple affair, as long as the tires are inflated and the tarmac is smooth.

Previously, an Airbus A380 double-deck widebody airliner had been towed successfully by a Porsche Cayenne S Diesel, which has less torque at its disposal than the Model X.

Tesla Model X: The Sound of Silence at 250 km/h

What does a 250 km/h drive in a Tesla Model X look like? Very little. Check out this video of a Model X P100D hitting its allowed top speed, shared by TopSpe...