The technological advances found in modern vehicles would have been unthinkable 25 years ago. Seeing how fast things are progressing, one can only imagine what tomorrow will look like.

The folks at Volvo are looking at a technology that could revolutionize... the windshield. The Swedish automaker is financing start-up company Spectralics, which is working on the development of a process that could transform car windshields into huge screens.

The amount of the investment, made by Volvo through its Volvo Cars Tech Fund branch, was not disclosed.

Spectralics, based in Israel, has developed what it calls a Multi-Layer Thin Combiner (MLTC). This is a film that can be applied to transparent surfaces, such as windshields.

The MLTC film allows images to be projected onto surfaces, which could create a large head-up display for the driver where virtual objects would be superimposed on the real view that the windshield provides, according to Volvo. This could create a more immersive version of the augmented reality head-up display that Mercedes-Benz launched with its S-Class sedan for 2021. 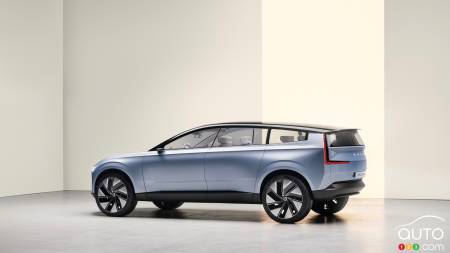 Other potential uses include filters for different applications, detecting activity in the cabin, projecting images from forward-facing cameras to reduce blind spots and holographic projections, again according to Volvo.

The automaker did not specify when this technology might be commercialized. There's no indication either if there are concrete plans to use it with production models. However, the investment could be the start of a longer-term partnership, which would eventually result in Volvo vehicles equipped with MLTC technology.

One can be for or against this idea, as seeing elements in one's field of vision at all times can be intrusive and also a source of distraction. However, if the whole thing is configurable and you can use it only when you feel the need, then it could be interesting.

Volvo has just given another glimpse of its future EX90, the electric replacement for the XC90. What we see this time is a cabin that has been designed witho...

Volvo and Google have begun testing their autonomous cars on city streets, a major step toward bringing the futuristic technology to the masses.

Volvo is never kidding when it comes to safety. After introducing airbags for pedestrians, the company now unveils a lightweight and inflatable rearward-faci...