In 2019, Volvo announced that it wanted to introduce a single system to limit the speed its vehicles can reach. Today, Volvo is delivering on this promise by announcing that, starting in 2021, all its products will be equipped with such a system.

We should be clear, most of the new vehicles sold on the market already have an electronic speed limit. Where Volvo is going further is by standardizing the practice, but also by lowering the ceiling to 180 km/h.

You might think that that’s still too much, but it's a step in the right direction here in Canada, where it becomes risky (legally speaking) to exceed 120 km/h.

In Germany, this will have a more-substantial impact on high-speed enthusiasts. Volvo’s move could well make its vehicles less popular in that country with its autobahns. Although, it should be noted that Polestar models from the company's electrical division are not affected by this measure.

Volvo stated that this initiative is intended to improve road safety and demonstrate how manufacturers can help promote safer driving, beyond legislation. Volvo is not the first company to do so, mind you. For years, Japanese manufacturers have limited the maximum speed of their vehicles to 180 km/h as part of a good faith agreement between competitors. Most German automakers also limit the speed of their vehicles to 250 km/h, with the exception of performance-oriented models.

Volvo also announced on Wednesday that it intends to introduce a driver-adjustable speed limiter. Similar to the technology offered by others, such as Ford's MyKey system, Volvo will offer a new smart key that allows owners to set their own limits below 180 km/h, for example when lending their car to another driver. 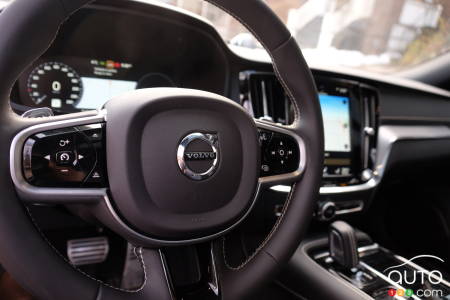 Volvo Will Debut a Second All-Electric SUV in 2021

Volvo has confirmed it will introduce a second all-electric SUV model in March, and begin production before the end of 2021.

Volvo To Introduce a Second All-Electric Model in Spring ...

Volvo set a very specific target date for the presentation of its second all-electric vehicle. On March 2, 2021, the new EV will join the XC40 Recharge in th...