Auto123 put several Lexus models to the test this past weekend at the Canadian Tire Circuit in Bowmanville, Ontario.

See also: Lexus Outlines Changes Coming to its Models for 2021

There are several all-wheel drive systems out there, and not all of them are created equal. This weekend, Lexus invited us to a place we usually visit in the summer, but on this occasion, the Mosport track was the setting of a winter test drive, with the star attractions a range of Lexus products.

The purpose of the exercise was simple enough: to understand the difference between a mechanical and electric all-wheel drive system. Lexus has a total of nine hybrid vehicles in its fleet that offer four-wheel drive.

To be honest, under normal circumstances, on dry pavement at low cruising speeds, it's pretty hard to notice any noticeable difference in behavior between the two systems. But in more extreme conditions, it's a different story. 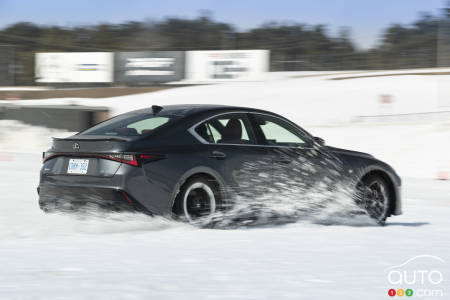 The mechanical system
In a mechanical system, there’s a driveshaft that sends power from the engine to all four wheels all the time. There’s no lag, meaning response is immediate and all the wheels always turn at the same pace, regardless of the speed of the vehicle. The flip side of this configuration is, that it’s less efficient in terms of fuel economy.

The electric system
In hybrid models like the RX 450h, the electric motor plays a dual role of increasing power and reducing fuel consumption by backing up the gas engine. The electric motor is coupled to each axle and there’s no drive shaft. In other words, there’s no physical link between the drive wheels and the motor.

The system thus becomes the equivalent of a part-time AWD system. The electric motor driving the rear wheels is only activated during a hard start from a standstill, during hard accelerations for more passing ability or during tight turns for more grip, and even if the front wheels slip to provide more traction. There's a slight delay in the application of grip in hybrid models, but you'll find that's not always a disadvantage. Ideal test conditions
Lexus set up slalom courses and some tight curves on hard-packed snow with patches of ice. We took turns testing the RX, NX and UX SUV models in gas and hybrid versions with and without electronic driving aids and in Regular, Eco and Sport modes. This was one of the first occasions we had to test-drive a regular and then an electric 4WD system.

And what it told us is quite simple. For those who like pure driving, the mechanical system is more predictable. You can play with the throttle to get the vehicle in the right angle. With the V6 under the hood of the RX, it's even more interesting. With hybrid models, there's a delay, a half-second pause before the system reacts.

There is, however, an advantage to the hybrid electric system. These electric motors operate independently of each other and can provide both positive and negative torque to improve handling and stability. While you don't get the more playful nature of mechanical all-wheel drive, electric all-wheel drive is more stable and predictable. Even if it does take a little fun out of the equation. Going fast in the snow
Next, we drove two all-wheel-drive cars. The Lexus RC's system is basically rear-wheel drive, but can send more grip to the front wheels if needed. The ES does exactly the opposite.

Because of its longer wheelbase and wider tracks, it was possible to play with the ES in surprising ways for a car that is basically a front-wheel-drive model with a fairly large heft. This showed that the power transfer from the front wheels is very fast, even if you remove all the electronic driving aids.

This proved more difficult with the RC with its lighter rear axle. In its case, you need more-advanced driving skills if you’re going to push the envelope. 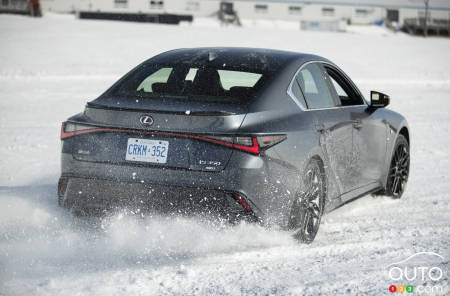 Photo: Lexus
Controlled slide in a Lexus IS

Three short laps and we’re done
For several of us on hand for the event, the most entertaining workshop was the one hosted by our colleague Russ Bond. He owns a driving school (Driveteq) and specializes in ice racing; he also owns 15 first-generation (2001-2005) Lexus IS models, some of which have over 300,000 km under their belts. They are still street legal, although some of the interior has been sacrificed.

Russ Bond had dressed up for us two models with studded tires, one with unstudded winter tires and a brand-new 2021 IS AWD, so we could compare what a 4WD model can do versus a rear-wheel drive. The goal was to find the magic moment that allows a controlled skid with a rear-wheel drive - something that’s impossible to do with studless tires.

Verdict
With the electrification of transportation proceeding apace, all-wheel drive and hybrid systems will become the norm in the automotive industry. Is this something to celebrate? If you're thinking safety and fuel economy, probably. Let's just hope that manufacturers can find ways to make this all-wheel drive system a pleasure to drive. 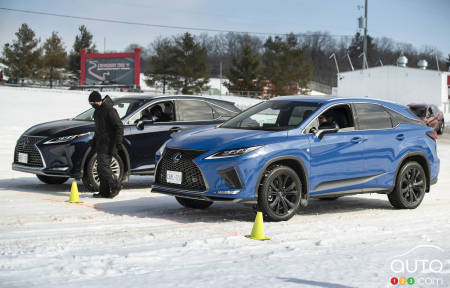 Photo: Lexus
The SUVs on their way 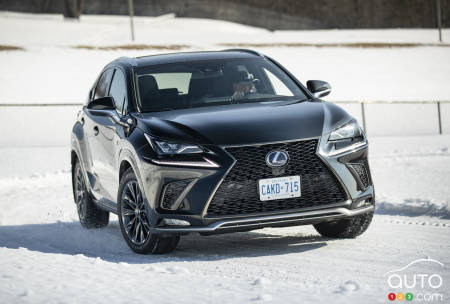 Photo: Lexus
The Lexus NX on the snow

Lexus High-Performance SUVs on the Way?

Lexus is looking into the possibility of giving some of its SUV models the F performance treatment. Confirmation came via Cooper Ericksen, vice president of ...

The Lexus ES has long been seen as a boring car. The kind your uncle might drive. Is this still the case though, especially since its latest redesign? Auto12...