New winter tires already? Summer hasn't arrived yet! And yet, tire manufacturers are already now getting ready to deliver their brand-new winter products, some in limited numbers, to various distributors.

The fact is, some motorists order their next new car months in advance and want new winter tires at the same time. It's not uncommon that these buyers take delivery of their vehicle in August or September. For folks like that, it’s important to know what will be available at that time to ensure getting winter tires developed with the latest technology.

And of course, there’s no better time than February or March for journalists specializing in the field to evaluate the new winter tires. This was the case for the upcoming new winter tires from Toyo, Continental and Michelin that were unveiled for all of North America at special presentations held in snowy Quebec.

See our Guide to the Best Winter Tires for SUVs, Pickups in Canada for 2019-2020

See our Guide to the Best All-Season and Summer Tires for SUVs, Pickups in Canada for 2019-2020

The GSi-6 HP was designed mainly for sports and performance vehicles, which explains the arrival of the Observe GSi-6 and GSi-6 LS, which are geared more for regular passenger cars, SUVs and crossovers as well as regular pickup trucks.

If you’re familiar with Toyo products, you might already know that this manufacturer has developed a special technique to replace studs, called Microbit, a kind of powder made from pulverized nut shells that is included in the tread rubber.

We were able to test drive the new Toyo Observe GSi-6 with various cars including a Mercedes-Benz and Chevrolet Blazer all-wheel-drive SUV and a Chevrolet Cruze front-wheel drive SUV.

We were able to test these new tires on both ice and dry pavement, as well as on snow-covered roads and snow-covered country trails at the wheel of regular cars with FWD or AWD and full-size pickup trucks.

The improvements made to this line of tires were evident, with the new Observe featuring a similar tread pattern with four circumferential grooves to evacuate as much water or slush as possible, offset side blocks with notches that act like claws in the snow, and high-density 3D sipes that the manufacturer calls Multi Wave.

The Observe GSi-6 and GSi-LS will be available next fall in wheel sizes from 14 to 22 inches.

A new winter tire from Continental specifically for Canada

A few days after the Toyo presentation, it was the turn of German manufacturer Continental to present a new winter tire, the IceContact XTRM, designed specifically for our Canadian winters. The event took place in full-blown winter conditions (snow and strong wind gusts) at the ICAR circuit in Mirabel.

Incidentally, this new product was developed with the input of Groupe Touchette (the largest tire distributor in Canada, operating under various banners). This can only help ensure the tire meets the requirements dictated by our specific road conditions.

The Continental IceContact XTRM will be available in two versions, the rubber-on-ice variant and the studded version. If your choice is the latter, this Continental product will offer amazing features including TriStud aluminum studs with 11 mm spikes, whose retention (by means of a special glue) in the tread is now four times higher than with traditional studded tires.

In addition, these factory-mounted studs are located between two small reservoirs in the tread to prevent ice build-up around them.

We were able to test these tires in both versions for acceleration, cornering and braking in a variety of front-wheel-drive cars and large all-wheel-drive SUVs. The most telling test was on a small track where we could drive Passat sedans with IceContact XTRMs with and without studs; it helped confirm that the studless models provided grip close to that of the studded versions on icy and snowy roads.

One of the most conclusive tests was done with the IceContact with and without studs on a specific circuit at ICAR, mid-storm.

Initially, the Continental XTRM will be available in 46 sizes for 15- to 22-inch wheels starting next fall, with a second version arriving later in the winter of 2021 with 45 additional sizes. It will come with a 72-month limited warranty and roadside assistance including towing service up to 250 kilometres.

Photo: É.Descarries
We were even given the chance to drive this Subaru specially prepared for rallies but equipped with IceContact tires!

In the case of Michelin, the French tire giant is relaunching its legendary X-Ice tire, which dates back some nine years. While the current generation of this tire is known as the X-Ice 3, the one that will now be offered to Canadian motorists will be the X-Ice...Snow.

Michelin has completely redesigned its product (made in Canada at its Nova Scotia plants), especially the tread. It’s now recognizable by its design that includes wider V-grooves than in the past in a more flexible rubber that includes silica. This rubber hides millions of micro-bubbles that open up as the tire wears to suck up water from the ice surface and grip snow.

This tire also has sipes deep enough for it to bite into the snow when worn down to 4/32nd of an inch - close to the legal limit of 2/32nd of an inch!

Photo: É.Descarries
Michelin briefly showed us the studded version of the X-Ice Snow, the X-Ice North.

At its presentation at the Mécaglisse test centre in Quebec, Michelin even unveiled a studded version, the X-Ice North with some 250 studs installed at strategic points in the tread.

At this event, a small group of journalists were able to judge the X-Ice Snow's capabilities... in the middle of a perfectly-timed snowstorm!

Photo: É.Descarries
The few FWD cars that were used for the comparative tests of the new X-Ice Snow at Mécaglisse.

Michelin asked local instructors to guide journalists driving regular cars with "worn" X-Ice Snow tires up to 4/32nd of an inch of groove depth (they had been reduced mechanically). To provide a comparison, a few cars were equipped with very high-quality competitive tires that had also had their treads reduced.

You won’t be surprised if I tell you how much better the new Michelin performs on ice and snow.

Photo: É.Descarries
Ford Escape SUVs were also used for the presentation of the X-Ice Snow.

We were also able to test drive the all-new X-Ice Snows on forest trails covered with a thick layer of fresh snow, again with some vehicles equipped with high-quality competitive winter tires for comparison.

Unfortunately, the North studded versions were not yet available for our test drives.

Photo: É.Descarries
The final test was a trek on a trail covered with heavy snow, in the middle of a snowstorm.

The X-Ice Snow will initially be available this fall in 82 sizes for 14 to 22 inch rims with T and H speed ratings, with 41 additional sizes to be added in the winter of 2021. The X-Ice North will also be offered for 14 to 22 inch wheels but only in 30 sizes, at least at the start.

Goodyear has its newest addition too

American giant Goodyear announced its own set of new products fo the 2020-2021 cold season, notably launching its all-new WinterCommand Ultra in 23 sizes for 15- to 18-inch rims. About 30 additional sizes will be announced later for 18 to 20-inch wheels. 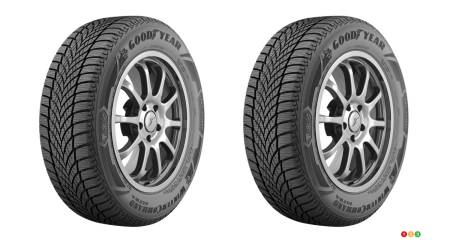 Photo: Goodyear
Goodyear will offer us a new winter tire for the next cold season, the WinterCommand Ultra.

Goodyear took pains of course to praise its own new technologies and improved features such as the V-Tred tread pattern and the more-flexible Cryo-Adaptive rubber.

Several other tires should be unveiled in the coming weeks. We will have a special report on all these new features at the beginning of next fall as part of our annual comprehensive guide.