Two cars collide on a public road. They’re both Lamborghini Aventadors. And they’re both yellow.

Ever come across a Lamborghini Aventador on the road? You might have, but just as likely you haven’t. How about two at the same time on a public road? Given the price of the model, odds of that happening are pretty slim. Now, think of the chances of two of them colliding on a street. Oh and they’re the same colour. Probably you’re approaching getting-hit-by-lightning odds.

And yet that’s precisely what happened recently on a street in Singapore. Imagine being a passerby and coming across the surreal scene of one yellow Lamborghini Aventador slammed into another.

It’s so farfetched you might assume it’s some kind of ad or someone being punk’d. But it appears this was actually a genuine road accident. Keep in mind that with current confinement measures roads are much emptier than usual, which means we’ve seen speed-hungry motorists around the world take advantage. Including, it seems, in Singapore.

From the image it looks clearly like one of the two yellow supercars rammed into the other that was stopped. Could it be a road race between friends that ended badly? Very possibly, especially since one of the Lambos involved was filmed a little earlier racing through streets in the same neighborhood.

We say it’s a safe bet the two drivers know each other. Immediately after the accident, they were seen removing the licence plates from the vehicles, likely in hopes of avoiding massive fines. Certainly laws in Singapore are notoriously severe. But the city-state is also known to have surveillance cameras installed everywhere. Which makes the attempt to evade penalties by the two hapless drivers seem like a panic move, done in the knowledge they’d probably been filmed speeding through the streets.

While repairs will surely be costly, it looks like both vehicles are likely to survive the collision. Let’s hope the drivers will think twice before pulling the same stunt again. 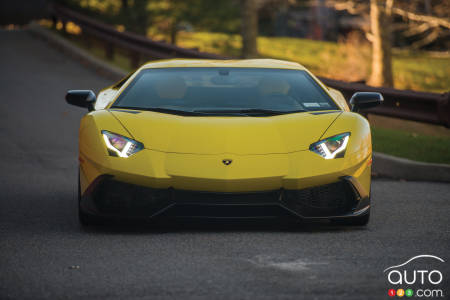 Koala Gets Behind the Wheel of an SUV in Australia

Images have ping-ponged around the Internet of a koala bear gripping the steering wheel of an SUV in Australia. The surreal scene took place following an acc...

A video has surfaced of a train losing the rooftops of many of its cars as it passes under a bridge. Auto123 thinks you should see this incredible footage, b...