Fifteen years of Sienna
The Sienna has been a successful nameplate for Toyota this past decade and a half. The first generation (1998-2003) worked especially well as it was deemed the Toyota Camry of minivans. At the time, and even today, that’s a winning tagline.

By the time the 2nd gen hit the road, the end of the minivan was looming nearby. As players from other manufacturers began falling, Toyota decided to reaffirm its standing as a manufacturer dedicated to a dying breed. By 2011, the current Sienna was introduced, and this time Toyota put it all into design.

The 2013 Toyota Sienna is the looker of the segment, especially in its tested SE trim. Far more interesting to drive than one would imagine, the Sienna hurts where ergonomics and finish are concerned. Loaded with space, the less-than-user-friendly HMI mars what could otherwise be the best alternative to the equally heavy-hitting yet discounted Dodge Grand Caravan.

What is a Toyota Sienna?
The 2013 Toyota Sienna is a minivan -- one of four left on the North American market. Presented as the “swagger wagon,” the Sienna prides itself as the minivan with a little attitude, unusual for a Toyota product.

It is the minivan that offers the largest range of possibilities through powertrains and trim levels. It has the broadest price range and can be outfitted to near luxury car levels. It could be considered the best adapted minivan for our market thanks to its available AWD system. It was the second best-selling minivan last year.

Technicalities
The 2013 Toyota Sienna is the only “full-size” minivan to make a 4-cylinder engine available. This 2.7L lump generates 187 hp and is only offered on the base 7-passenger LE.

All others gain the 3.5L V6 which significantly raises the power bar. Horsepower is rated at 266 and torque, 245 lb-ft. It is with this engine only that the Active Torque Control 4WD system can be had.

All Siennas are equipped with a 6-speed automatic transmission and electric power steering.

Driving the Toyota Sienna
The 2013 Toyota Sienna SE’s sporty stance is equal parts show and go. The most noticeable aspect of the Sienna’s drive is the weight of its electric power steering. Sporty and well dosed, the feel and response is better than that of the Odyssey -- another surprise. As well, its turning radius is very tight, especially useful in parking lots.

The ride is also eye opening. Controlled yet giving, it does not punish but firmly limits roll through on- or off-ramps. I would have preferred more brake-pedal feel, as well as quicker reactions, and more braking power.

The V6 is plenty powerful and generates a pleasing sound. The autobox plays nice with the engine and promotes spirited driving. In day-to-day driving, as a Toyota Sienna should be driven, it excels at “working.”

Inside and out of the Toyota Sienna
The 2013 Toyota Sienna, like its Japanese competitors, attempts to make itself look less like a minivan without affecting the fact that it is a minivan.

The Sienna’s styling is fine, if not cool in the tested SE trim. Its wide squat bumpers give the Toyota a more seizing road presence that makes it most appealing to younger families. The SE gains 19” wheels, sport fascias and grille, and smoked headlights that make it the “hottest” of all minivans.

The cabin is roomy, as it should be, and all three rows are comfortable. The 3rd folds neatly and quickly into the rear load floor, and the 2nd features a stowable middle seats which is useless, save for a child under the age of 5.

The dashboard and its ergonomics are terrible. From the driver’s seat, I had a hard time reaching a number of HVAC and audio controls. A shorter person will have an even tougher time making some adjustments. This is not something that mom or dad will get used to. As well, although fit is fine, the materials are deplorable. The textured hard plastics look cheaper than they probably are and tarnish the passenger experience.

Comparing the Toyota Sienna
We did compare the 2013 Toyota Sienna with two of its three closest rivals and it fared OK. Its biggest downfall is its price/value quotient. It’s no surprise here that the Dodge Grand Caravan is unbeatable.

The 2013 Toyota Sienna remains a positively good product, and the availability of AWD makes it a great alternative for families on less of a budget. 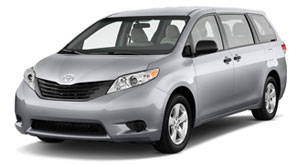 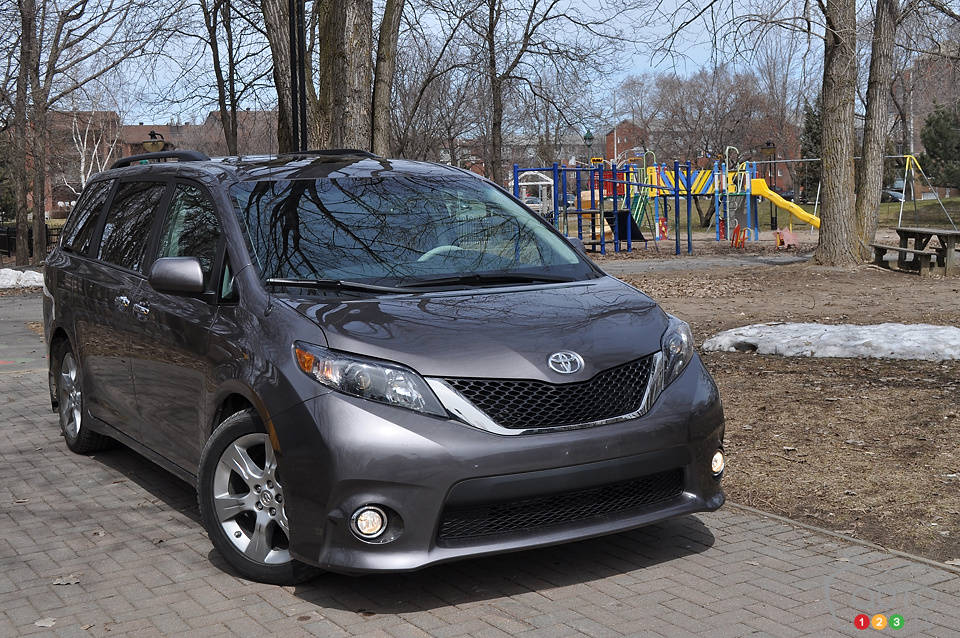 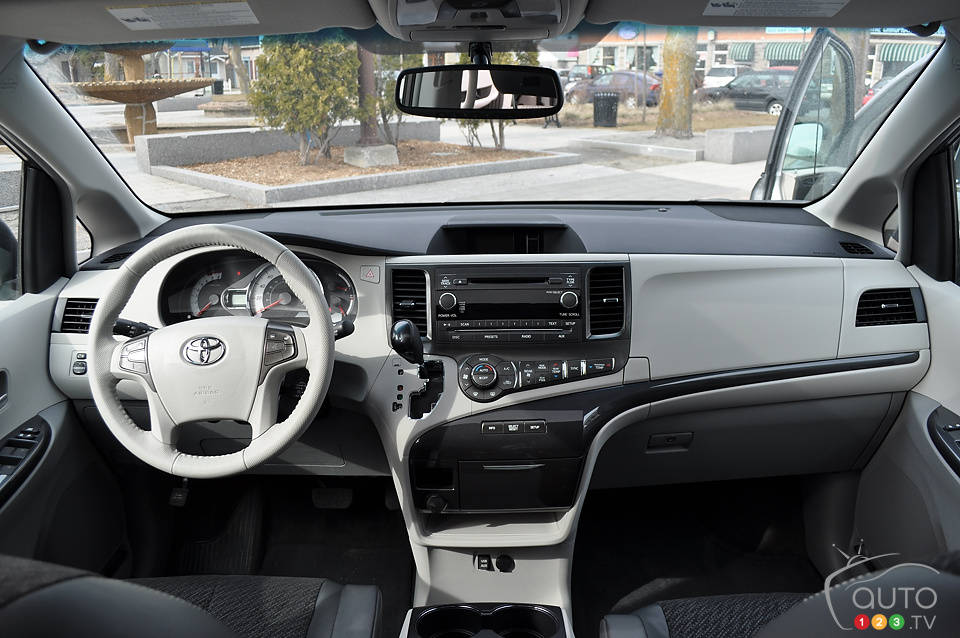 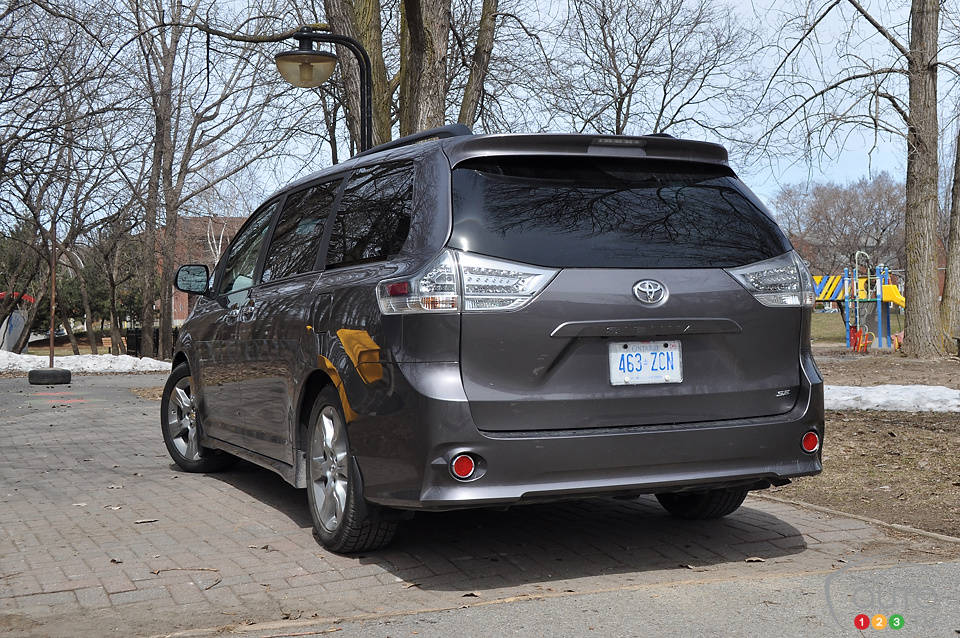 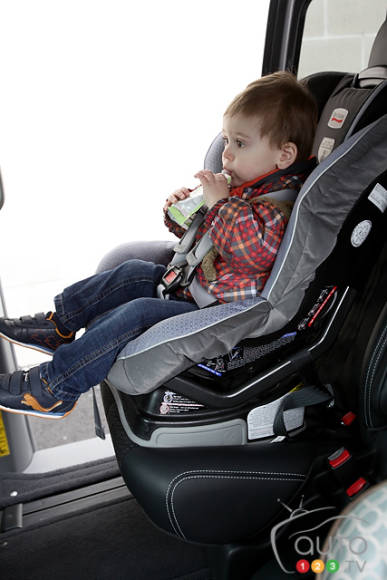 Succumbing to the need for a minivan doesn't have to mean relinquishing your manhood and everything that makes you an interesting human being. Seriously. "Mi...

This upscale version of the Dodge Grand Caravan has a total of four doors of which two are of the sliding variety. The chrome grille proudly displays the ico...

The Caravan is a Chrysler nameplate that's been around for three decades and they truly have held the market for the minivan. From the beginning, the Dodge C...