The Acura TL has been retired — though for years, your writer sought to drive it regularly, having held this discreetly potent and level-headed luxury sedan as a benchmark in its segment and price range. A new model that incorporates the names of both the TL and the smaller TSX has replaced them: the TLX.

Instantly recognizable as an Acura, the TLX is well suited to a shopper prioritizing under-the-radar styling. Signature design cues, including Jewel Eye LED headlights and a lack of visible exhaust pipes, give away the brand identity of a model that’s understatedly handsome but not flashy, and athletic without looking over the top. It’s a gentlemanly-looking ride, without overdoing it or making fellow motorists wonder how large a collection of man scarves you own.

It’s a pleasing ride, too. Even the rougher roads in my locale did little to coax excessive roughness and noise from the Acura TLX’s suspension, which is on the firm and sporty side, but with a thick slab of softness around the edges to support long-haul cruising comfort. Drivers after a comfortable highway cruiser that’s completely unbothered when tossed at speed around successive bends will welcome this setup. And though the steering isn’t huge on communication, it does feel nice, weighty, and locked-on at highway velocities.

Rear-seat and trunk space should prove adequate for most shoppers, with a cargo hold that’s relatively deep and wide, and rear seats that are spacious enough for most occupants, although headroom diminishes quickly for taller ones. Complaints can be easily drowned out by the mighty ELS audio system, as required.

Up front, the cabin is formal, upscale, and sophisticated, as well as slightly high-tech with two display screens, a multi-function steering wheel, and an electronic gearshift console that looks like something from the future. Leather, wood, and aluminum are all flaunted, and overall the TLX is a laid-back and relaxing place to be. That said, some shoppers will opt away from the wood and brown leather for more youthful-looking trimmings.

The 2016 Acura TLX can be specified as a 4-cylinder, front-wheel drive model with a high-revving, 205-horsepower 2.4L VTEC engine and four-wheel steering or with a 3.5L V6 offering 290 horsepower and two-wheel steering, but adding the brand’s Super-Handling All-Wheel Drive (SH-AWD) system.

The two TLX models have distinctive personalities that will appeal to different drivers.

The big V6 engine is quiet, buttery smooth, and delivers thick and effortless acceleration with minimal pedal input when driven gently. Or, click the Integrated Dynamic System (IDS) button into Sport mode and drop the hammer, and it’s an Acura V6 through and through: ready to strike eagerly at its redline, emitting a meaty howl, and activating a notable ramp-up of power output and sound effects as the VTEC system kicks in to enhance engine breathing. No matter how you drive it, the TLX with V6 and AWD feels abundantly solid, locked on, and discreetly potent.

The 4-cylinder model is more energetic and fun to drive, even if less powerful. Gear shifts occur faster thanks to the dual-clutch transmission (the V6 comes with a lazier 9-speed automatic), while the lighter front end enables friskier turn-in. Also, the base engine sounds delightfully old-school and mechanical when you drive the stink out of it, which it seems to adore.

The gist? Get the 4-cylinder TLX if you’re after a more involved performance feel, and the V6 if you’re looking for maximum subtle performance and confidence.

In either model, though, the 2016 Acura TLX’s rigid, next-generation frame structure enables a quieter ride, reduced weight, and more precise handling, which you’ll experience on every drive, as well as better crash impact performance, which hopefully you won’t.

Safety is handled by an assortment of the very latest outward-looking radar hazard detection systems available, with features that keep you in your lane, keep you from rear-ending or side-swiping anyone, or even from backing into a laneway while traffic approaches. Winter driving safety was covered nicely in the tester, too, thanks partly to the potent LED headlights and their excellent washer system, and partly to the set of quality winter tires mounted.

These tires help the ABS and AWD systems extract more traction from any surface. Stopping? Good pedal feel, strong bite, and fast stops that are a little squirmier than expected on split traction surfaces, but largely drama-free overall. And accelerating, even with heavy throttle over mixed traction, you feel the leading AWD system instantly and precisely redistributing engine power between and across the axles to keep you moving.

Notably, the SH-AWD system, when pushed in the snow, acts very fast, almost never wastefully spins a wheel, and can even overdrive a single rear wheel in some situations to help turn the car on its axis more effectively. As such, the SH-AWD system offers a handling improvement as much as a traction improvement. If you’re already an owner and/or a fan of an Acura equipped with SH-AWD, you’ll feel right at home. The system even features revisions allowing it to respond more consistently in more conditions, including in extreme cold.

Speaking of extreme cold, the tester included a 2-way remote start system that’s far reaching and tells you when the engine fires up via the keyfob. On numerous mornings at 32 below, my TLX started quickly, and without being plugged in. Mileage on my watch landed at a thirstier-than-expected 12L/100km. Partly to blame are the extreme cold and the excessive remote starting.

Gripes? In most drive modes the throttle and transmission feel lazy, and a hearty throttle smash is needed to get the Acura TLX charging ahead at full steam. A bigger complaint relates to the navigation interface: While the TLX is a rolling showcase of the most modern technologies on the road, the graphical output of the navigation system calls to mind the main map in Super Mario 3 from my early-nineties video game years.

Ultimately, though, where discreetly potent performance, great overall comfort, slick AWD technology, and a generous list of must-have features are a priority, the 2016 Acura TLX should be considered for a test drive. Pricing with 4-cylinder power and front-wheel drive starts at $35,290, while a fully loaded model like the SH-AWD Elite tester comes in at $47,790. 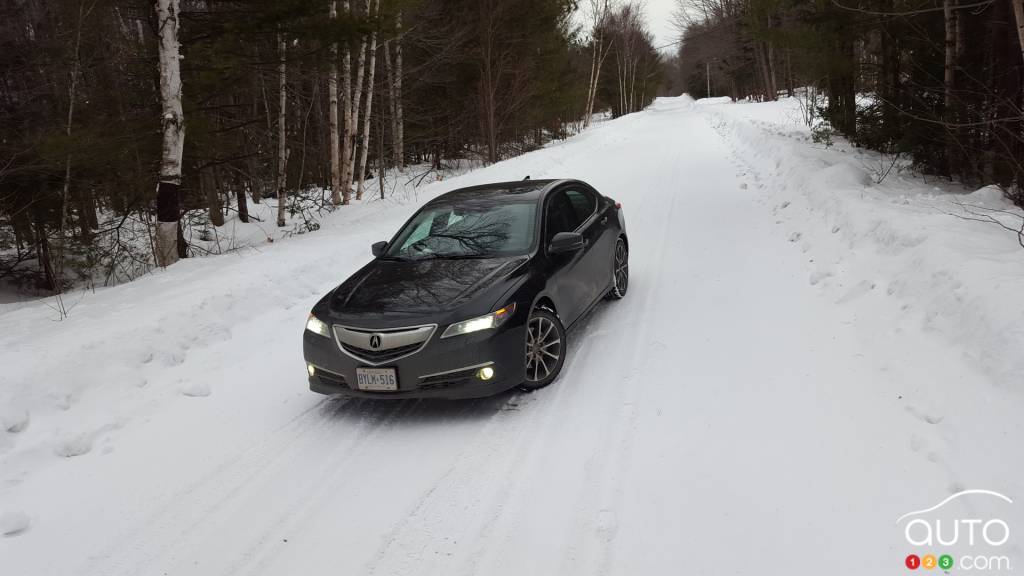 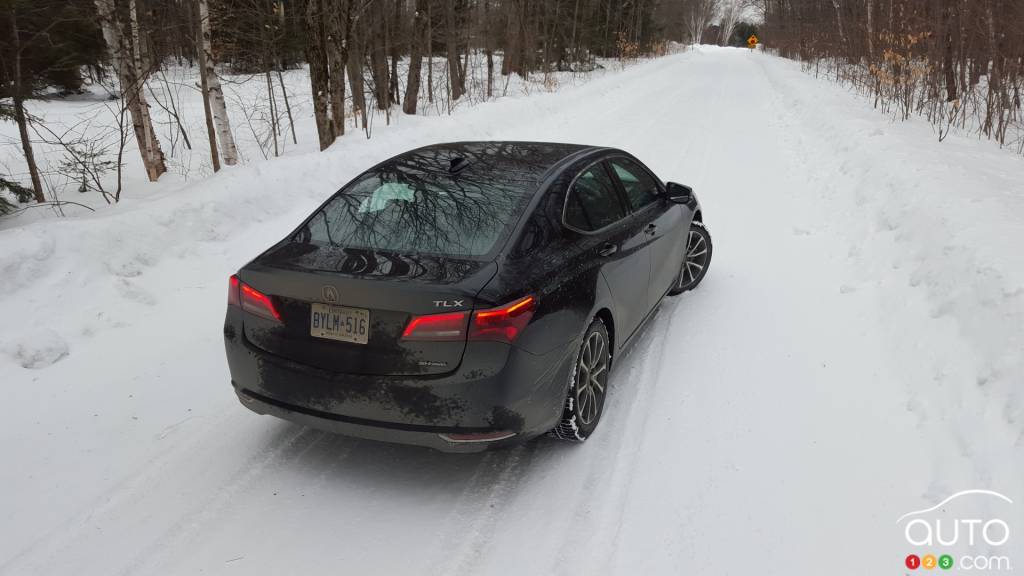 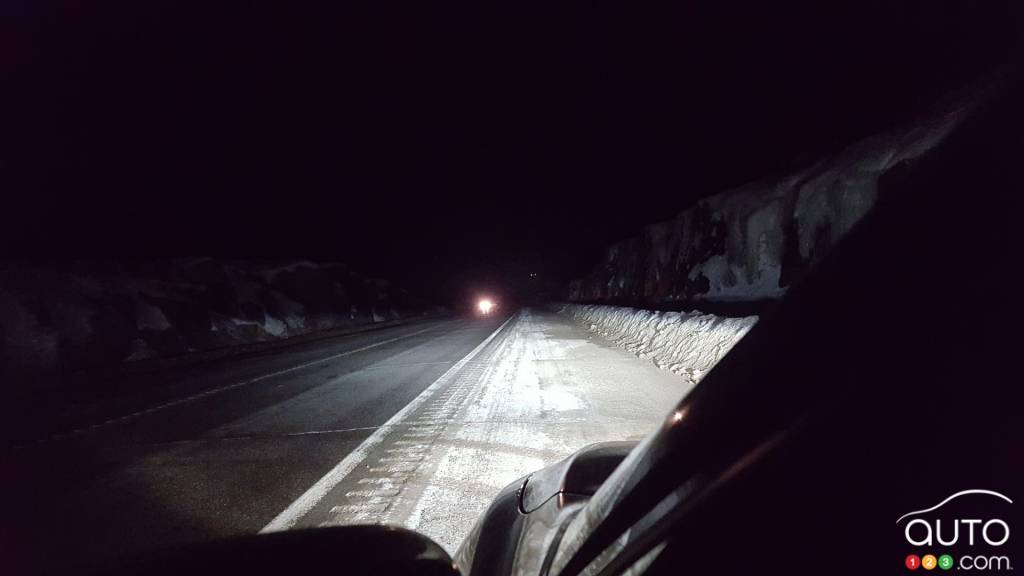 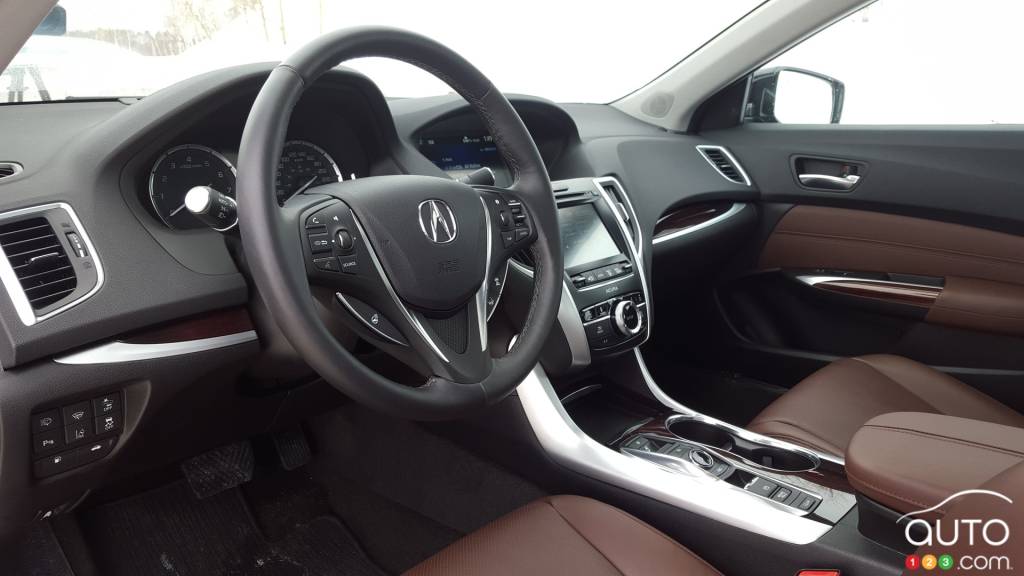