Hyundai is recalling 94,646 sedans because a problem in the anti-lock brake control module (ABS) could cause a short circuit, which creates a fire risk.

Yes, that’s right: another recall for a fire hazard to with vehicles produced by the Hyundai-Kia group. Let's just say these are starting to pile up. The cause is very different n this case, however.

The recall actually involves just one and the same model, but produced under different banners. For the 2015 and 2016 model-years, it was known as the Hyundai Genesis; then, from 2017 onwards, the vehicle was sold under the separate Genesis luxury brand and took the name Genesis G80.

According to documents filed with the NHTSA (National Highway Traffic Safety Administration), the fire can be triggered by an electrical short in the ABS module; the fire can occur both when the car is parked and when it is being driven. Hyundai is currently investigating the cause of the short circuit in the ABS module. 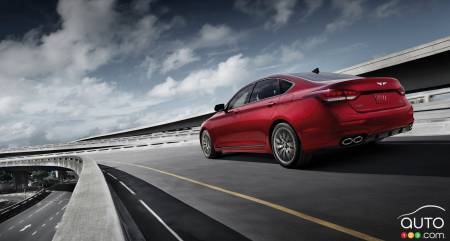 The company told NHTSA that no accidents or injuries have been reported and that as of March 10, two vehicle fires have been confirmed in the United States (and none in other countries).

In Canada, 4756 models are being recalled.

According to the NHTSA, owners may see or smell smoke or have the check engine light or battery light come on before the fire starts. Owners will be contacted to have the ABS module fuse replaced beginning in May.

On Transport Canada's website, a notice explains that “Hyundai will notify owners by mail and advise you to take your vehicle to a dealer to replace fuse for the ABS module. Hyundai recommends that you should park your vehicle outdoors and away from other vehicles or structures until the recall repairs have been completed.”