You’ve got to hand it to Buick. They certainly know how to make the most of a good thing. The Enclave has been the brand’s flagship SUV for nine years ― with only a mild update for 2013 ― and it’s still going strong. What’s more, they’re about to wring one more year out of the old carcass before launching the redesigned 2018 model, which will end an amazing, decade-long first generation.

Despite its age, a total of 3,361 Enclave customers thought it was the best choice in the segment last year, and to Buick’s credit it’s already sent 2,116 down Canadian roads over the first six months of 2016. Why is it gaining traction? I can point to a number of key attributes that work for me, starting with styling that looks rich and upmarket in a traditionally luxurious way.

Well-designed from the onset
The original Lambda platform architecture was also very well-designed, not to mention extremely large, the Buick Enclave’s overall footprint being greater than that of most midsize SUV/CUV class members. The result is superb interior roominess in all three rows, and cargo capacity galore.

Whereas competitors only offer seating for seven, you can opt for an 8-passenger Enclave, and the easy-access rearmost seats even fit real adults. The cargo area, which isn’t finished quite as nicely as its premium peers, nevertheless measures 682 litres behind the 60/40-split third row, 1,985 litres aft of the two second-row buckets (which conveniently provide a large opening down the middle for stowing longer items like skis), and finally 3,286 litres when both rear rows are flattened. There’s also a handy storage compartment below the load floor.

The 2016 Buick Enclave’s seating system doesn’t include power-folding seatbacks or even cargo-wall handles like many of its rivals, so folding the second row requires a walk around to the side doors. Dropping the seat flips the headrests down automatically, however.

Not very sporty, but wonderfully comfortable
The driver’s seat is large, spacious, fairly adjustable, and therefore quite comfortable, but there’s almost no lateral support. With one hand firmly gripping whatever it can in order to keep the body in place, performance is limited despite a reasonably agile suspension.

Of course, the Buick Enclave is more about comfort than speed, offering a sublime ride even over rougher pavement, along with an incredibly quiet cabin that makes highway cruising hard to beat. On that note, the vehicle takes to high-speed straights and nice long curves effortlessly, making it an ideal conveyance for the yearly summer road trip or weekend jaunts to the ski hill in winter. Fuel economy is also fairly good at a claimed 14.2L/100km city and 9.9L/100km highway with FWD or 14.6L/100km city and 10.2L/100km highway with AWD (regular gas will suffice, too).

The standard 3.6L V6 creates wonderful sound effects at full throttle and proves amply energetic with 288 horsepower and 270 lb-ft of torque, although the smooth-shifting, 6-speed automatic transmission it’s mated to is two gears shy of the average competitor and also misses auto start/stop, regenerative braking, and other fuel-saving technologies that are now commonplace in the luxury segment.

Seriously lacking luxury features
Speaking of missing features, the 2016 Buick Enclave only has an auto up/down power window for the driver and auto down power window for the front passenger. Other items that should either be standard or at least made available include LED headlamps, a colour TFT multi-information display, adaptive cruise control, an electromechanical parking brake, lane keeping assist, collision mitigation braking with pedestrian detection, and the list goes on.

On the positive, a big, beautiful rear glass sunroof in my Premium tester duplicated the daylight-emitting efforts of the one up front, which is a good thing as the Enclave’s interior is a true delight from a visual perspective. I suppose you’ll first need to appreciate traditional American luxury, since there’s plenty of dark chrome trim and what looks like an entire rainforest leveled to fit out its decorative inlays ― don’t worry, it’s easily recognizable faux wood trim everywhere but the top third of the steering wheel. It’s an attractive albeit old-school look, especially the dated trip computer, but the infotainment system on the centre stack should meet most buyers’ expectations.

The latter is a bit small at 6.5”, yet the resolution is very clear, colours are rich, and graphics are good. I found the various touch-sensitive buttons around the screen to be tiny even for my smallish hands, but everything worked well including my phone that synchronized quickly and stayed connected all week. The Bose audio system delivered superb sound. Additionally, the 2016 Buick Enclave now includes OnStar 4G LTE, turning it into a rolling Wi-Fi hotspot.

The good, the bad, and the ugly
I really liked the leather-like, stitched dash top, which is better executed than some others in the segment, and the soft-touch door uppers were nice albeit expected in the class. On the other hand, Buick needs to do a much better job of finishing the rest of its interior plastics that don’t even come close to measuring up.

On the positive, at least six of the Buick Enclave’s eight roof pillars are fabric-wrapped, the same high-grade roofliner material also surrounding the sun visors. What’s more, along with the HVAC interface mentioned a moment ago, the majority of cabin switchgear is made from good-quality materials, tightly fitted, and nicely damped. The cheap roll-top centre bin cover shouldn’t be in a $50,000 SUV, though. There’s worse: The industry’s cheapest key fob dangling from an even cheaper five-and-dime plastic key will make even Chevy Spark owners feel like they’re living large. Where’s the push-button ignition system, Buick? Or keyless entry? Don’t get me started again.

Unfortunately, those last active safety features and others were not enough to earn an IIHS Top Safety Pick rating, although all 2016 Buick Enclave models get five stars from the NHTSA.

Pricey for entry-level luxury
Starting at $56,435, my Premium tester was equipped with an optional cargo cover and cargo net, a dual-pane sunroof, a navigation system with NavTraffic, all-weather floor mats, metallic paint, and a towing package that increased the Enclave’s capacity from 907-2,041 kilograms (2,000-4,500 lbs). All of that pushed the price into Audi Q7 and BMW X5 territory with a final tally of $63,715.

It still could have added more, mind you. A fully equipped model with 20” alloys, rear-seat entertainment, and more climbs above $66,000, which makes it pricier than a loaded Infiniti QX60 or Acura MDX Elite ― both much better equipped and delivering arguably a more premium experience in daily use and at the dealership level.

Expected reliability a Buick strong card
Then again, your local GM dealer might offer a bigger discount, while even more critical, Buick has a better reliability record than those Japanese luxury upstarts with a fifth-place ranking among premium brands in Consumer Reports' 2016 report card on reliability, and a third place in J.D. Power’s 2016 Initial Quality Study and 2016 Vehicle Dependability Study.

I suppose there’s a price to pay for getting where you want to go without any problem, and the 2016 Buick Enclave Premium will certainly keep you comfortable along the way. It’s far from perfect, but the big American SUV does some things very well, and for that it deserves its reasonable Canadian success. However, in order for the Enclave to grow its market share, the all-new 2018 model should come sooner rather than later. 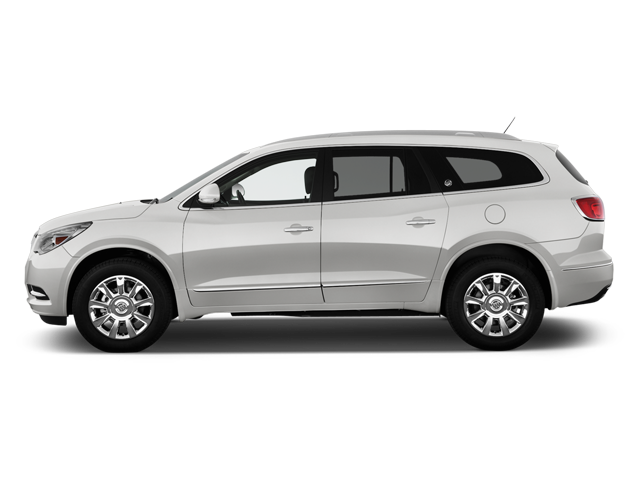 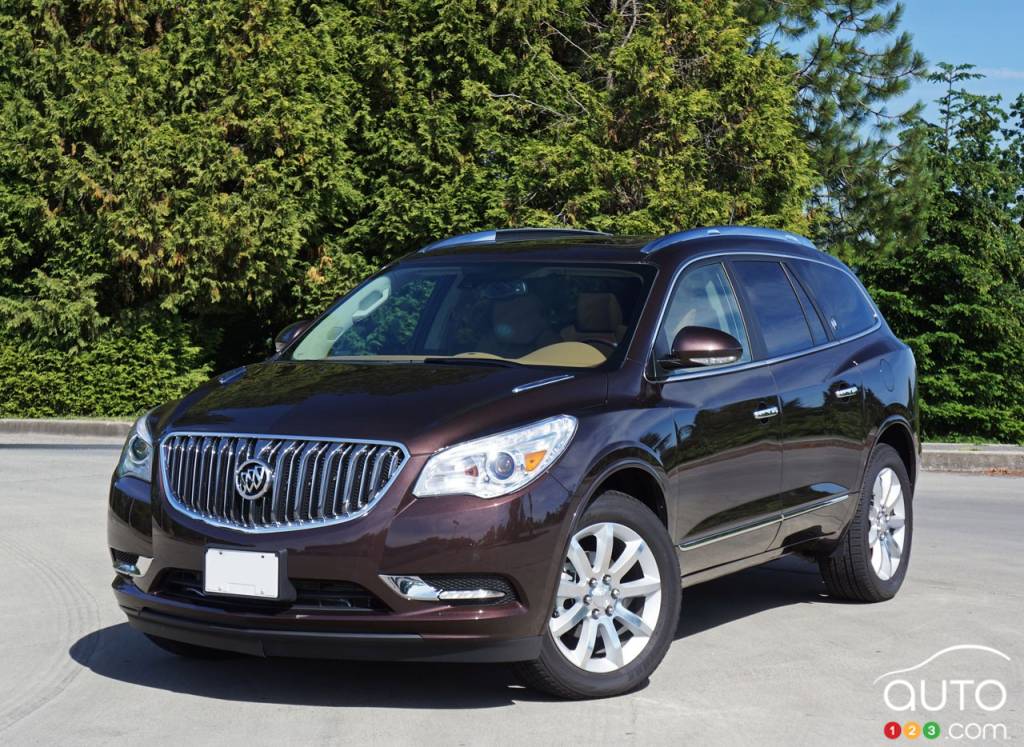 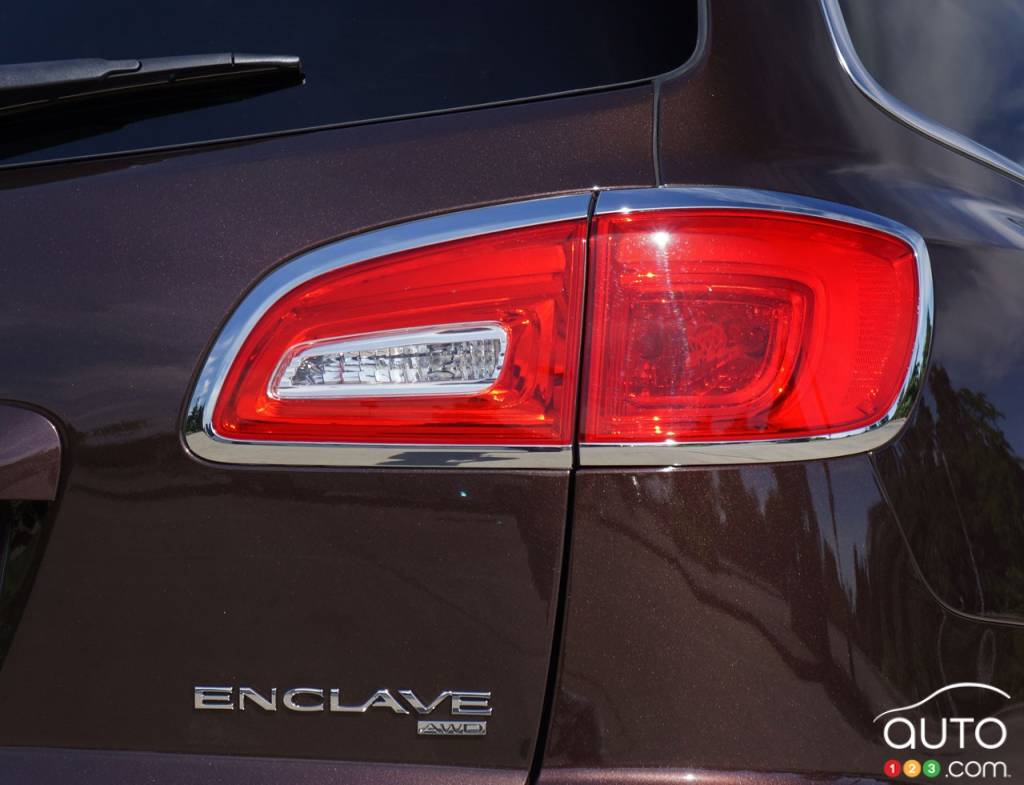 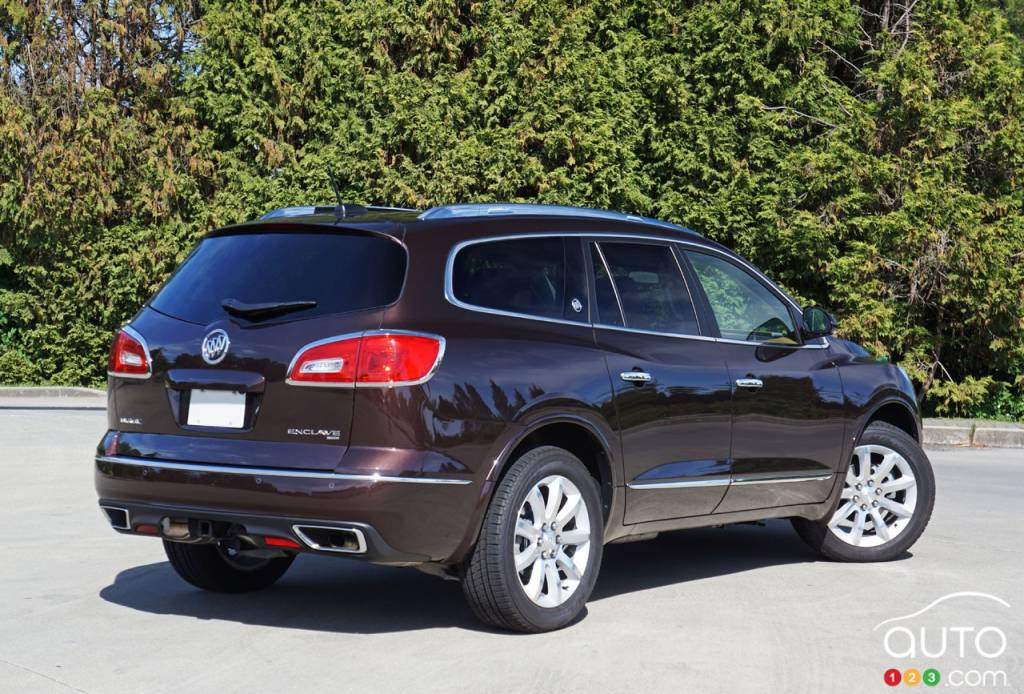 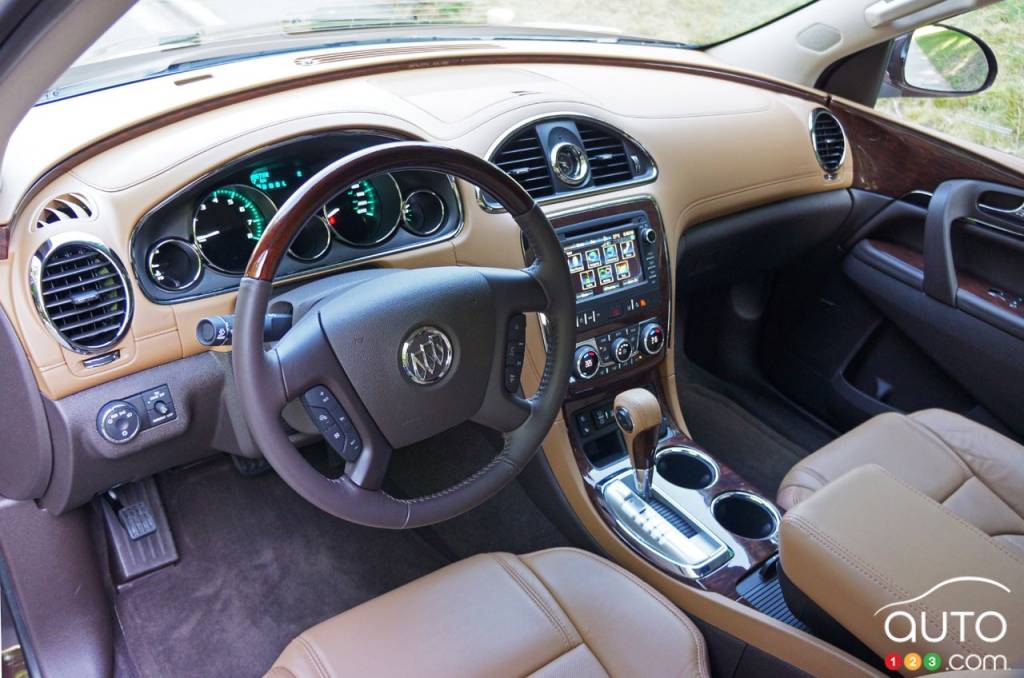 Auto123 gets behind the wheel of an SUV that's starting to get older relative to others on the market, the 2020 Buick Enclave. While it's packed with feature...

2020 Buick Enclave Gets a New Version and Massaging Seats

Buick is giving its Enclave SUV a few tweaks for 2020. The next iteration of Buick’s largest utility model marks the debut of a new Sport Touring package, an...