The X3, hitherto BMW’s world-beating compact luxury crossover (they call it a “Sport Activity Vehicle”, or “SAV” but let’s just call it what it is), has been re-designed for 2018. It’s been given new styling, a host of new interior features and chassis tweaks to make the X3 better on the road as well as off it. Of course, being such a big seller, they wouldn’t want to change it all that much for fear of alienating loyalists. Thing is, the X3’s competition has really ramped itself over the last three years with the likes of Land Rover, Mercedes-Benz and soon, Acura and Infiniti all releasing all-new versions of their competing products. So, BMW has a little work to do to keep up with the Joneses. With all that in mind, we set out to see what this updated ‘ute from BMW is all about.

Tougher, but not too tough
Of course, one of the big attractions for buyers of vehicles like this is the perception that they can handle themselves off the beaten track without feeling like a truck on the everyday grind, where they’re put to use the most.

To that end, the X3 doesn’t get butchy plastic fender cladding or exposed under-body protective panels; instead, a new underbody diffuser improves airflow beneath the X3. There is, however, more space between the axels and shorter front and rear overhangs, features that BMW says add to its ruggedness. That may be true, but the bottom line is that there’s very little being done to hide that this is going to mostly be an urban trekker.

Which, if I’m honest, is fine by me because the X3 has evolved into a much less awkward-looking thing, and into something that’s much more elegant and refined than previous; if I need something that looks like it spends most of its time off road, sloshing through mud puddles and flinging gravel all over the place, I would buy a Toyota 4Runner TRD Pro. The X3 isn’t about that, so it gets some nice, low-profile and streamlined headlamp lenses, 3D effect taillight lenses, a few subtle body panel creases here and there and a glorious set of optional 20” two-tone wheels that do well to mimic the futuristic items seen on the all-new X2 crossover. There’s also dual exhaust outlets and subtle roof spoiler, which do add a flavour of performance to the X3’s exterior styling.

Interior upgrades
For the first time in the X3’s existence, it now has tri-zone climate control, so rear occupants can set their digital climate control independently of what’s going on up-front. Front passengers also get their own upgrades in the form of ventilated seats, while a 250 mm longer panoramic moonroof benefits all  those riding inside, as does the expanded cargo space.

As is often the case with BMW, the driver’s seating position is right on the money, with the various cockpit surfaces subtly angled towards you. What’s interesting is that while it’s hard to really see this, you can absolutely feel it as soon as you step inside. Everything is just so easy to reach and legible, that it’s no surprise when you find out that it’s been designed as such.

The rear seats are a little bit of a different story; they are snug, and taller riders may want a little more legroom. They are a 40/20/40 split and for 2018, all three of those segments can be individually adjusted. That’s fine, but know that if you plan on installing a rear-facing child’s seat back there, as I did, you’d best do it behind the front passenger because you have to move the front seat forward to the point where it’s not all that feasible for longer-legged drivers.

I’ll never grow tired of that driver’s seat, though. Perfectly padded, angled and supportive – I’d have it no other way and the new ventilation feature is the cherry on top, if only it were just a touch more powerful.

Don’t forget the tech
The iDrive controller comes as standard on all X3 models, but you can specify a Professional Navigation system that provides a 10-inch touchscreen display; previously, you could only use the iDrive controller to navigate the menus. I guess it’s nice to have the touch ability, but I hardly used it, relying mostly on the iDrive wheel. The way the screen is mounted atop the centre stack means it’s a little hard to reach, so the control wheel was the more natural choice. Those who sit closer than me to the dash may see things differently, however. Oh, and if you want yet another way to interact with your car, there’s always gesture control (new to the X3 for ’18), if you don’t mind people looking at you as if you were pretending to direct the rendition of Beethoven’s 9th coming through your Harmon/Kardon sound system. I’m a self-conscious guy, so I rarely used this feature. But that’s me.

I was perfectly happy to just let that great sound system play me my tunes through Apple CarPlay. Which, as is the case with all BMWs, only functions over Bluetooth; plugging in your phone will charge it, but it will not activate CarPlay. You have to pair your phone in addition, so you don’t have to plug-in every time you set off; just make sure Bluetooth’s on. It also means there’s less need to have bright, unsightly and smash-and-grabbable power cords sneaking through your cockpit. That’s all well and good, though I had trouble accessing Google Play Music almost every time I stepped in; I wonder if that has something to do with that app not communicating with the system all that well over the airwaves.

Handling it
All manner of nips and tucks have been applied to the chassis, including modified steering and the use of aluminum swivel bearings and lighter anti-roll bars. To take things up yet another notch, you can now spec adaptive dampers, as our car had. Adjustable either by selecting one of three drive-modes or individually setting them yourself, they help increase stability at high speeds, as well as handling as the road gets twistier. I found the difference to be not quite as marked as other vehicles I’ve tried with similar tech, but there’s enough felt through the seat of your pants that you can tell something has changed underneath you. The $1,500 M Sport Plus Package that adds the dampers, meanwhile, also adds better brakes (with blue-painted M-logo’d calipers!) and even more aggressive steering.

Even without all that, though, the X3 is a strong-handling car in the first place. If ever there was a crossover that handled like a car, this is it. Body roll is pleasingly reduced even with a somewhat tall roof and thanks to that seating position, it feels like you’re in a much smaller vehicle. The adaptive dampers probably help, here, but even leaving those in comfort mode kept things surprisingly agile. Add the heavy steering (that remains too low on feel, which seems to be the BMW way these days) and its zippy turn-in, and you have quite the sporty CUV on your hands, even without speccing the all-new M40i model.

That model gets an inline-6 cylinder motor, and while our 3.0i trim loses a pair of cylinders, it still makes almost 250 hp and torque (248 of each, to be precise), all fed through an 8-speed auto with shift paddles. It’s a well-mannered transmission that is actually fun to shift on your own from time to time, another nod to the X3’s performance creds. As a result, I was surprised by how zippy my forward progress was, but if the M40i feels anything like other BMW models equipped with the same engine, it’s the way you’ll want to go if your really want a performance CUV to face off against the likes of the Porsche Macan or Mercedes-AMG GLC 45.

Well-rounded
If you want more of a mix of all worlds, however, the 3.0i is a very good choice. The TwinPower turbo-4 remains an excellent motor that does well in almost every application in which it’s used, the interior is down a little on space but well-equipped and the new styling has turned the X3 into an even classier cruiser. The X3 has more competition than ever before, but from where I’m sitting, it has what it takes to take on all comers. 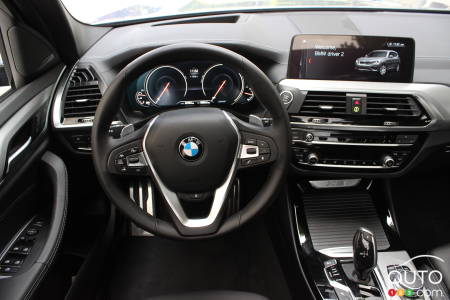 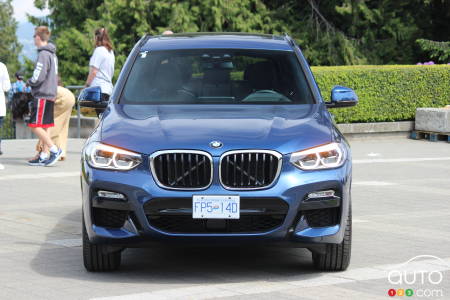 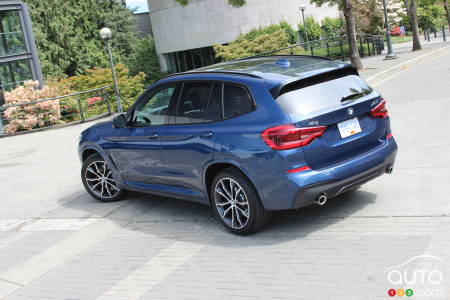 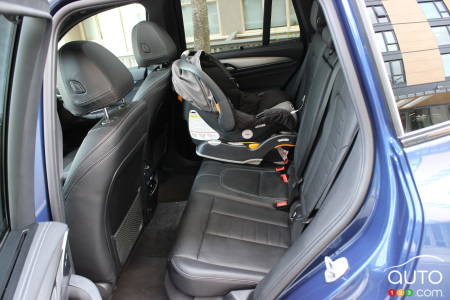 We review the 2018 BMW X1, runt of the company’s growing SUV/crossover litter. Small(ish) it may be, but its strong driving dynamics, user-friendly interior ...