The best luxury compact sport sedans of this world are those that fit daily comfort and simplicity right alongside high-level performance and driving dynamics, available when the mood hits.

To the surprise of no one, this market segment remains dominated largely by Teutonic models like the Audi S4, BMW 340i and Mercedes-AMG C 43. Among these German giants lurk a few interlopers, such as the American Cadillac ATS V6, the British Jaguar XE 35t and the Japanese INFINITI Q50 3.0T, that have managed to impress their share of consumers. For the rest, it’s better luck next time.

Styling and design, inside and out
I won’t dwell on the looks of the car, since so much of what consumers appreciate or not about a vehicle is subjective. I will say though that the current design of the IS 350 dates from 2014, and it is starting to show some signs of aging. Those inveterate fans of Japanese design will be just fine with that, and I must admit that the imposing hourglass grille with wire motif, the hook-shaped LED daytime running lights and the Ultrasonic Blue colour did give my F SPORT tester a striking look. In addition to that new grille, the 2018 edition also welcomes LED headlights, new aerodynamic elements and truly outstanding alloy wheels.

Once aboard, I discovered a quiet cockpit environment decked with refined materials – all soft-touch materials, including on the pillars covered in cloth and leather material, the pleasant scent of which lingers on the hands and clothes long after you’ve left the vehicle! Thumbs up as well to the padded leather on the doors and on each side of the console where you can rest your knees.
The available F SPORT seats in this IS 350 provide a nice, enveloping comfort zone thanks to the lateral support and to their being heated/ventilated, not to mention the several-position power-adjust capability and 3-driver memory. There’s even a type of bulge on the left side of the console that allows you to rest your calf when playing with the accelerator. The F SPORT steering wheel is for its part great to the touch; it’s thicker around and covered in perforated leather at the hand-grip positions.

I totally enjoyed the excellent 15-speaker Mark Levinson audio system that comes with the package, as well as the unique instrumentation inspired by Lexus’ defunct LFA supercar.

All was not sunny in the cabin of the 2018 IS 350 AWD F SPORT, mind you. For one thing I found the seats distinctly less comfortable after a few hours on the road. And when you turn off the engine, the driver’s seat automatically slides back in order to make exiting the car easier; that’s great except it forced me to make sure to then advance it a bit, because otherwise anyone accessing the back seats would have a lot more difficult time of it. As well, back row space is an issue, as much above the head as in front of the knees. I don’t recommend making anyone sit in the middle of the back row; it’s just too tight. What’s more, by cramped passengers back there complained about the lack of heated seats (which they enjoy in my own Santa Fe).

I should point out as well that overall presentation in front falls short of what it could be. The large 10.3-inch screen is fine in and of itself, but its location, too embedded and hard to reach, makes the touchscreen not very touchable. So it was that I often fell back on the physical buttons on the steering wheel (well-designed but limited in their scope), or on the problematic Remote Touch command on the console, which is a sort of mouse that is terribly imprecise and thus frustrating to use. I stayed away from it as much as possible, to be honest.

On the roads, two sides of the coin
The 3.5L V6 so omnipresent in Toyota/Lexus models here produces 311 hp and 277 lb-ft of torque. This is less than just about any V6 in any of the IS 350’s rivals. The sound is pleasant, for sure, but the sound insulation of the cabin, well, insulates you from it. I was also disappointed by the lack of bite demonstrated when accelerating from a stop. I had to use Sport S/S+ mode (added with the F SPORT package) to produce any really good results. To that end, I don’t know why the IS 350 is still operating with a 6-speed automatic transmission (albeit with paddle shifters on the wheel) when the new IS 300 is fitted with an 8-speed version.

Once set in motion, however, the car behaves admirably. It’s worth understanding, by the way, that the different drive modes mainly affect the parameters of the powertrain, and don’t really touch on the steering or the suspension. Ride is as gentle as ever, and the IS handles corners well thanks to its rigid frame. I also give it high marks for its effective all-wheel drive, its Snow mode and its powerful brakes, as well as for the presence of 10 airbags and a large collection of functions included in the Lexus+ safety system. They work well… until, that is, extreme winter weather renders them inactive. By the way, if these systems tend to get on your nerves, good news: they can be deactivated or even just made less sensitive.

Who is it aimed at?
If you’re a fan of luxury compact sport sedans, and if you value reliability, quality of conception and a smooth daily ride, even if it costs you more at the pump, the 2018 Lexus IS 350 AWD is looking at you. Of course, you don’t need to fork over $55,000 to get that; an IS 300 (starting price $43,590) will do you just fine. On the other hand, if you’re itching for strong performance and driving sensations, you’ll be smart to look at any of those inescapable German models mentioned at the start. 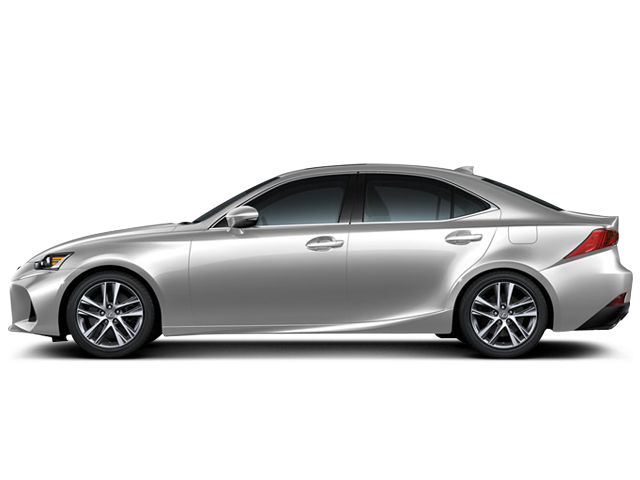 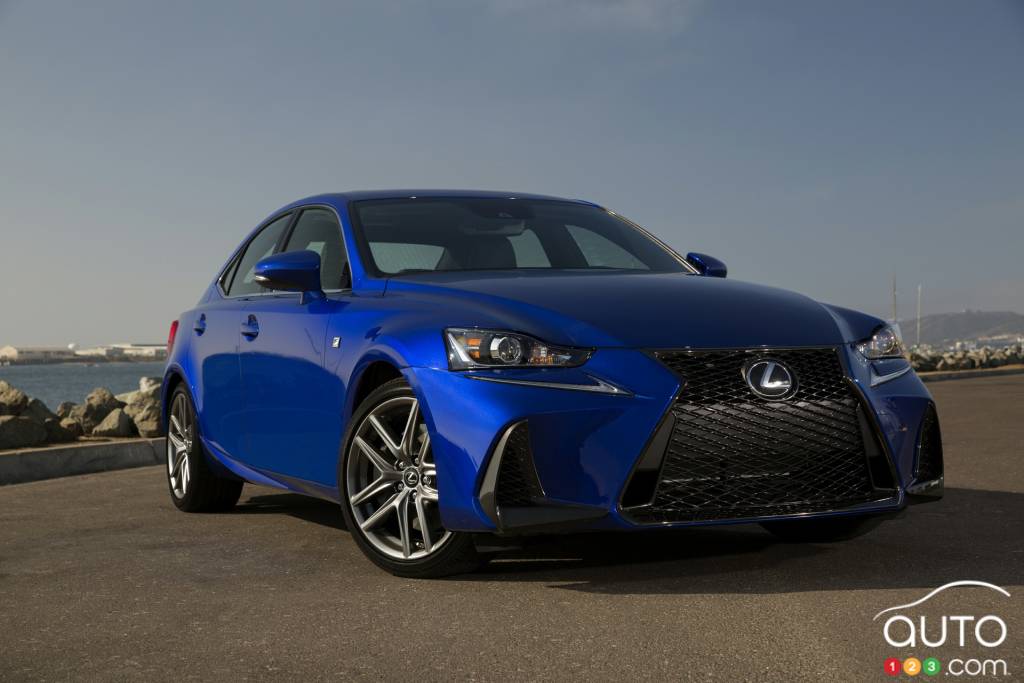 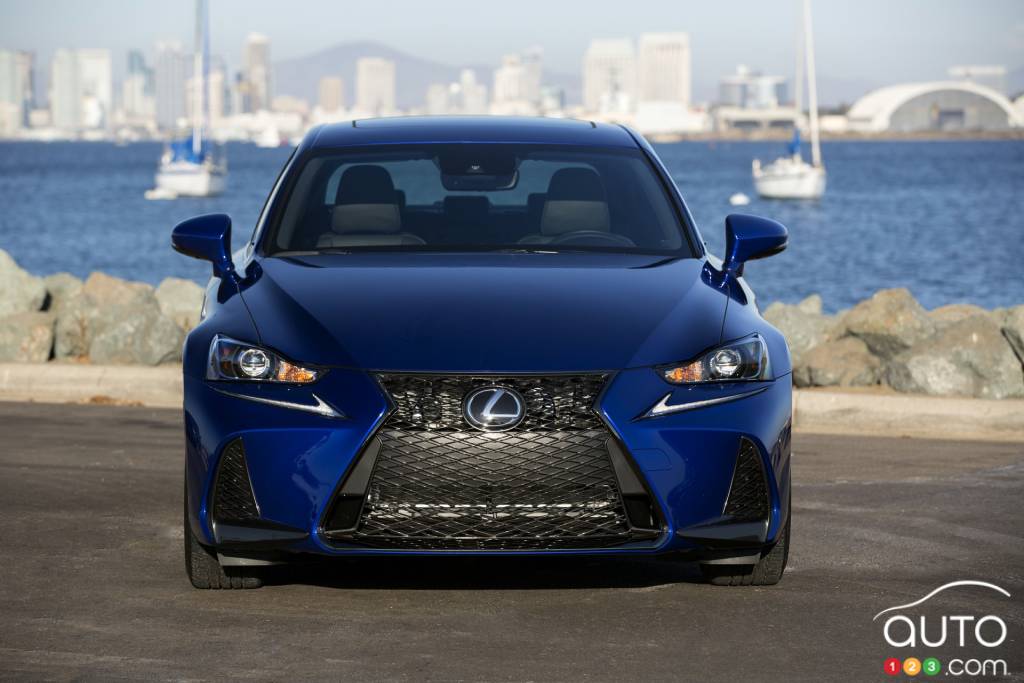 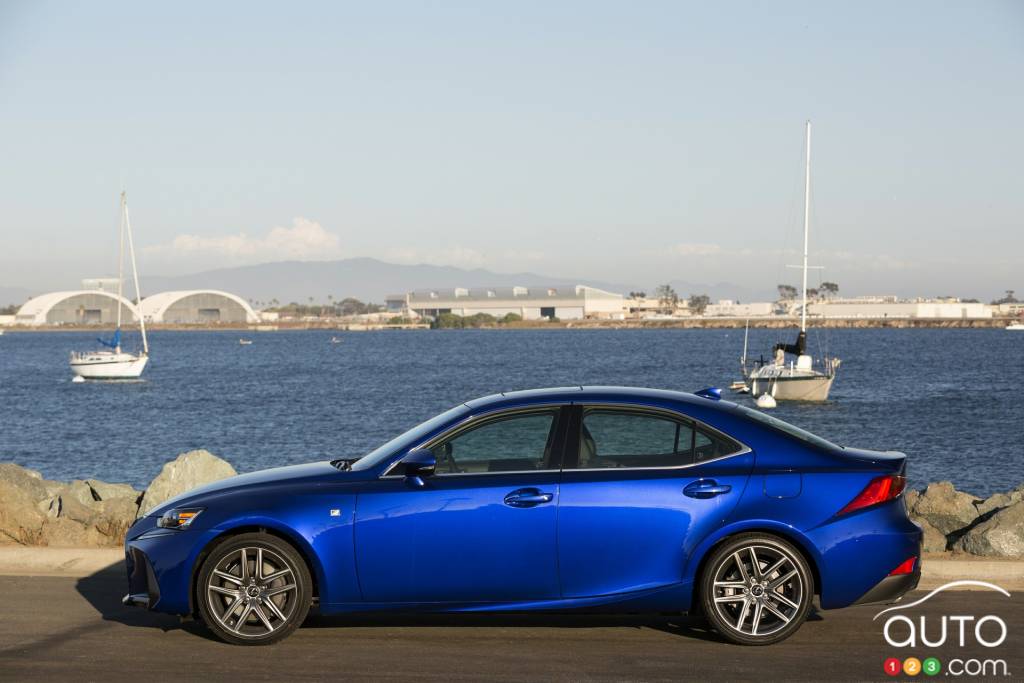 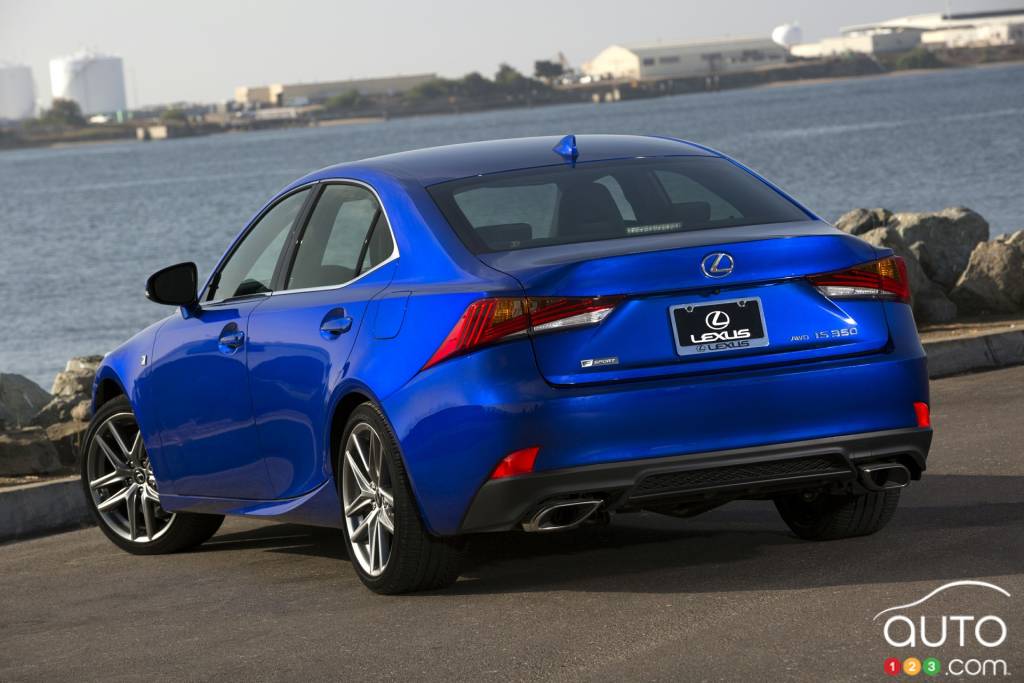 Having unveiled its flagship sedan at the beginning of the year, Lexus puts an exclamation mark on the revamped iconic model with the addition of an F SPORT ...

Longer and lower than the sedan it replaces, the all-new LS debuts a strikingly bold design with a coupe-like silhouette punctuated by the new Lexus design l...