After recently renewing its A7 and A8 models, Audi has given a total makeover to its A6 sedan, a midsize car tasked with taking on top guns like the BMW 5 Series and Mercedes-Benz E Class, not to mention the Lexus GS, Cadillac CTS and Jaguar XF. I could go on.

In order for it to compete, Audi gave its new A6 the same platform used on its A7 and A8; the architecture has become a reference in the domain.

Discretion, always
In the parking lot where the A6 awaited me, it actually gave me a bit of a wink upon activation of the remote. The stylish headlights buttress the traditional Audi front grille, which I should add gains in attractiveness when it doesn’t need to sport the front licence plate, as is the case here in Quebec.

The watchword for most of the German automaker’s models is discretion in terms of their shape, and this new A6 is no exception – although, some elements do provide an added amount of relief  to the whole, like that character line found at the back. The sophistication comes from the front grille, headlights and rear lights. What’s more, all of this elegance still adds up to a drag coefficient of just 0.24, a remarkable figure for such a large car. 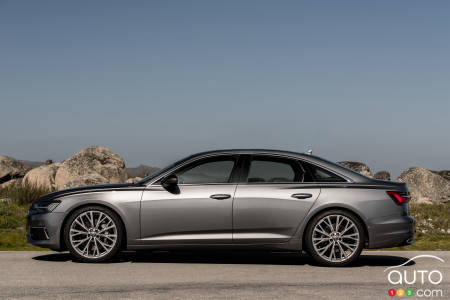 This reserved approach was somewhat loosened up when it came to the interior, which delivers the same levels of sophistication and refinement as the other of the manufacturer’s models. As soon as you settle into the cabin, the quality of the materials, the comfort of the seats and the overall presentation have quite an intoxicating effect. One element of note is the near-total absence of buttons for the various commands.

That’s made possible by the presence of two screens stacked one on top of the other at the top of the central console. The higher one is 10.1 inches and manages the infotainment systems, while the lower one is 8.6 inches and allows for setting the climate control and other systems, for example the seats. In fact, the only button to survive the wholesale house-cleaning of the button clutter found on the outgoing model is the radio’s volume button.

The driver gets to enjoy an excellent seating position, and the steering wheel is a joy to hold thanks to its user-friendly thickness. For the first time in the history of the A6, the dials have been replaced by a virtual cockpit, which displays not only the speed and the RPM, but projects, in its middle section, a variety of different data, particularly to do with the navigation system.

The black lacquer surfaces work well in conjunction with the ersatz carbon-fibre applications and brushed-aluminum elements. It’s clear from experiencing the A6 that Audi hasn’t lost its touch when it comes to designing a car’s interior. 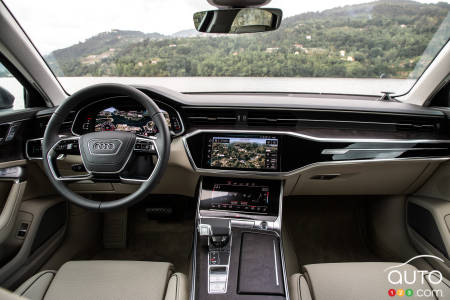 New platform
The new platform is the conduit to the exceptional on-road behaviour of the car thanks to its sophisticated design and greater stiffness. But the most interesting development has to do with what’s under the hood. The first models being offered to consumers are higher-end trims equipped with a V6, with a 4-cylinder set to join the product offering later on.

The initial 3.0L V6 replaces the old engine that featured a compressor. In accordance with current trends, the turbo is placed between the V of the cylinders. The engine has an output of 335 hp and 267 lb-ft of torque, and is wedded to a 7-speed dual-clutch automatic transmission. This being an Audi, it has all-wheel drive, more specifically the Quattro Ultra system that disengages the rear wheels in certain conditions. The sedan also features an energy recovery system that feeds a battery that in turn supplies the needed energy to an robust starter for easier stop-starts.

Drivers can choose between five drive modes to accentuate different performance elements and adjust the suspension. The modes are Efficiency, Comfort, Auto, Dynamic and Individual. That last one allows for better managing road comportment, but it does require a bit of research on the part of the driver to ensure they’re choosing the right settings. 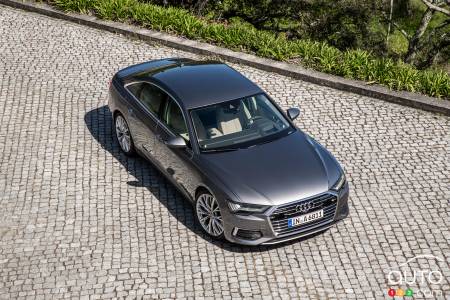 No shortage of character
The traditional knock against the A6 is that, as refined and comfortable as it was, its driving dynamics lacked punch. This time around, it’s best not to get lulled into complacency by its placid appearance (which remains mild in spite of some attempts to jazz up its look). The engine responds instantaneously, gear shifts are lightning-quick and it takes only a shade over 5 seconds to accelerate from 0-100 km/h.

My test drive of the 2019 A6 took place in the suburbs of Detroit, where the roads don’t necessarily put the suspension to much of a rigours test.  As luck would have it, however, on finding my way back to the hotel, I came across a winding road that allowed me to properly put to the test the road handling of the car and its suspension system.

In this situation the car behaved impeccably, even as I took the tight corners at speed. The suspension easily absorbed the roads that were as pockmarked as any you’d find in Canada. 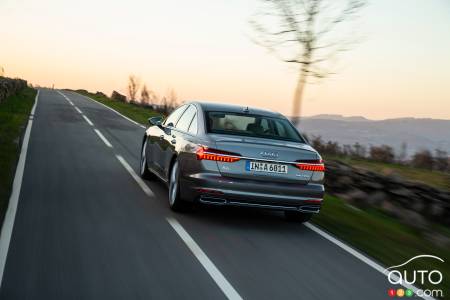 In fact, he only issue I found was with the slightly imprecise steering, which would have given me a better feel for the road. But that’s virtually a trademark of the brand, no matter what settings you put on the car. In any case it’s not worth making a big fuss about, given that the car is so exceptional in terms of its execution, finishing, mechanics and road handling. Plus I’m sure that many will find the steering just perfectly to their liking. A matter of taste, you might say…

This fifth generation of the A6 really has all the elements needed to compete seriously with the other big guns of the category. 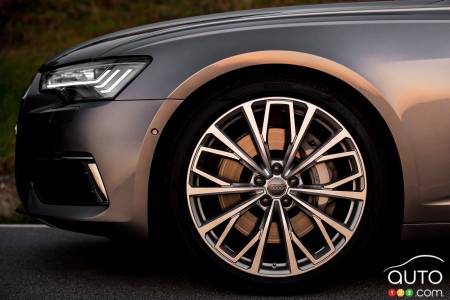 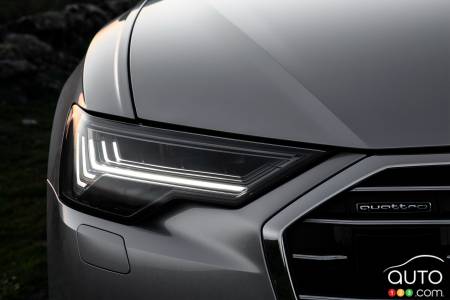 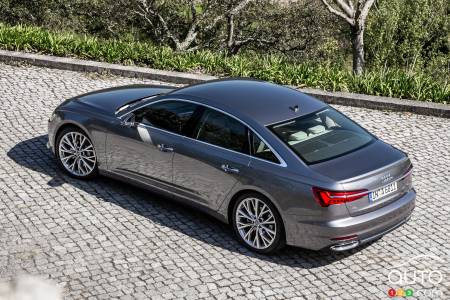 2019 Audi A6 is Super-Sophisticated, Powerful… and Mildly...

With the new A6, Audi is presenting the eighth generation of its successful midsize sedan and brings numerous innovations to the segment, whether in terms of...

On November 21 we will be naming the winners of the 2019 Auto123.com Awards for best vehicles of the year. Here are the finalists for Luxury Mid-Size Car of ...