The Dodge Durango made its debut in 2011, and while generally the big SUV has aged quite well, it has, well, aged. While we await the big revision to come, the 2019 Durango is back tweaked and with five distinct versions, some of which offer the possibility of adding a big fat V8 under the massive hood. The 7-seat midsize SUV segment being as competitive as it is, Dodge decided to set its product apart through this V8 offering for 2019.

The Durango, lapping up the looks
High-stanced and aggressive on its legs, the Durango is a vehicle that’s not easily missed on the road. This SUV that in reality sits somewhere between the midsize and full-size categories is a vehicle that naturally imposes itself in traffic. And that suits the type of buyers who go for this type of vehicle just fine.

The GT version we drove rides on 20-inch carbon-coloured aluminum alloy wheels as well as performance grille and front fascia to boost the aggression factor.

From the back, the notable features are racing-inspired LED lights that span the entire width and constitute an element unique to Dodge products, as well as a power rear liftgate.

A welcoming, well-designed interior
The Durango’s interior is vast and well-designed. Our tester had an all-black colour scheme with highly comfortable leather seating and power-adjustable seats. These are also heated in both the front and second rows.

Once installed in those seats, we quickly noted how well-thought out the placement of all the main commands is. Everything’s within easy reach, and the volume and climate control buttons are big, so much so you can’t miss them if you tried. On the other hand I harbour doubts about their durability over the long term.

The gear shifter is pleasant to the grip and it design is nicely ergonomic. The steering wheel meanwhile is leather-wrapped and heated – a bit too much even, in my view. Those with chronically cold hands will be happy…

The Uconnect is also included as standard equipment. This system is intuitive, easy to use and to doesn’t take long at all to figure it all out, which is a blessing. It’s reached via a 7-inch touchscreen; Apple CarPlay and Android Auto integration are also part of the package. If you want even more tech, you can opt for the Uconnect 4C NAV system, which brings with it an 8.4-inch screen. In our view this is one of the best systems on the market. 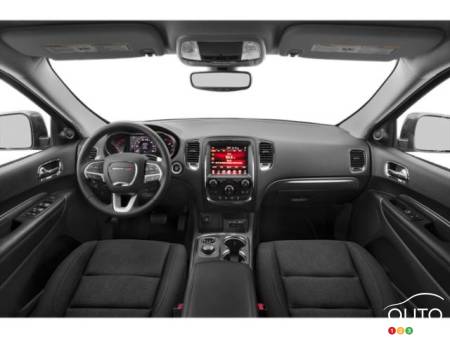 The Durango comes by default with a 6-speaker audio system and two USB ports, but new as an option for 2019 is a sublime 19-speaker harmon/kardon audio system that just might knock your socks off!

You want room?
The Durango’s interior is, as we mentioned, a vast space. That said, even though it can accommodate seven occupants, the third row’s practicality is limited, in terms of access and space. Dodge also gives the option of going with captain’s chairs for the second row, which makes for a great six-occupant option and makes access to that third row easier.

Still though, as is often the case with three-row people movers, the last row is strictly for juniors, no more. Any trip where you’re jamming adults in that space, the trip better be a short one…

The mechanics
Our tester, the GT, runs on a 3.6L V6 that develops 293 hp (295 hp for the dual-exhaust models) and 260 lb-ft of torque. Power runs through and 8-speed automatic transmission and delivers a maximum towing capacity of 3,946 kg. Ideal for families wanting to take the skidoos out on a weekend excursion!

The engine is solid and very responsive, and it never seems short of punch even hauling this hefty vehicle. Less rosy is the fuel-consumption picture, though that’s no surprise. Our observed fuel consumption for the week was 14.8L/100 km. Ouch…

If that doesn’t meet your power needs (and are willing to take an even bigger hit at the pump!), you can opt for one of two V8 engines. The 5.7L unit makes 360 hp and 390 lb-ft of torque under the hood of the R/T, while the performance-minded SRT gets a 6.4L engine with output of 475 hp and 470 lb-ft of torque. Take your pick!

On the road
The Durango GT, for all its size, delivers a driving experience well-suited to daily commuting, thanks to the comfort level and smooth ride when at cruising speed. It’s very much in its element in that context. On the other hand you’ll find it a more unwieldy creature when taking tight corners and when parking in tight spots.

Straight-line acceleration is impressive and the road handling is pretty agile for such a big guy. As we mentioned, comfort is not an issue even if the ride is a bit on the stiff side.

Speaking of acceleration, the GT’s performance, as impressive as it is, likely pales in comparison with what the V8-equipped SRT is capable of, but we’ll have occasion to test that out further down the road! 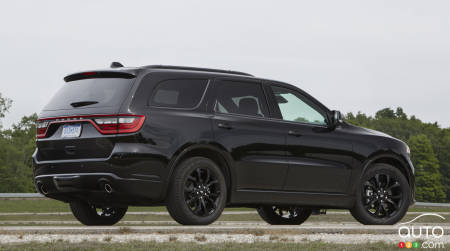 In our view the pricing spread between bottom and top of the range is massive, and the prices asked across the board are pretty steep, especially given the relative outdatedness of the Durango.

Still, the Durango manages to remain relevant in the segment against rivals like the Mazda CX-9, Ford Explorer and Chevrolet Traverse. For now. The overhaul that’s coming in the next few years will help it stay in the game.

The Durango is a genuine utility model, for all its comfort focus. Unlike most others, like the CX-9, that really sit somewhere between the SUV and minivan formats, this Dodge model is more of a cross between an SUV and a pickup. The solidity of the vehicle is a front-and-centre feature; it feels like it can take a punch and come back for more, and that it will stay the course over hundreds of thousands of kilometres if you hang on to it that long.

Things aren’t perfect inside. The need for an update is pretty apparent, and that it hasn’t happened yet in such a competitive category as this is hard to understand. Dodge has gotten away with it because it has continued to modernize the Durango in bits and pieces over the years, plus the driving experience is still positive.

But then there’s the pricing, a little painful especially if you want a V8 under the hood. Of course, the price tag attached to those versions is a reflection of the fact that the Durango is the only vehicle in its category to offer a performance V8 engine! 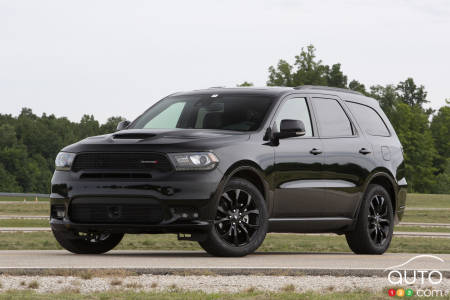 The interior is spacious and ergonomically laid out
Strong, easy-to-use multimedia system
Handles well despite its size
Power across the range, but especially with the V8 engines

Its thirst for gasoline, especially with a V8
Too many drive assist systems are optional and not standard
Pricing overall is too high for an aging model

The Dodge Durango will be getting improvements for 2019, the automaker has announced. These were overdue to say the least, the model having remained largely ...

The 2021 Dodge Durango R/T is an increasingly rare creature in the industry: an old-school SUV. And for many folks, that's just fine! Here's our review of a ...