In case you didn’t know, there are still a lot of people out there in Canada that go for full-size SUVs. And guess what? General Motors is the manufacturer that builds most of them, starting with 3,578 Chevrolet Tahoes and 3,061 GMC Yukons sold here last year. What’s more, GM also sold 2,789 Chevrolet Suburbans (extended version of the Tahoe) and 2,266 Yukon XLs (the stretched version of the Yukon).

These unique station-wagon-like trucks have very little competition: only 2,798 Ford Expeditions, 1,435 Nissan Armadas and 684 Toyota Sequoias were sold in our country last year! Total Canadian sales of that specific segment amounted to 16,609 units in 2018. And that’s without counting the luxury segment that includes the Cadillac Escalade (based on Tahoe and Yukon), Lincoln Navigator (based on the Expedition) and the Japanese-made INFINITI QX80 and Lexus LX570, not to mention the Brits (Land and Range Rover) and Germans (Mercedes-Benz).

In the US, meanwhile, the numbers are staggering. Almost 338,000 of these types of vehicles were sold in 2018 (and that doesn’t include the luxury versions), among them some 75,000 Yukons. And here we get to the subject of this review. More specifically the Yukon SLT Graphite Edition.

Actually, the Graphite Edition could very well be the last special edition to be produced of this generation of the Yukon (and Tahoe), because an all-new generation of the two maxi-wagons is due very soon. Indeed, the current Tahoe and Yukon are mostly based on the Chevrolet Silverado and GMC Sierra, and those models were recently redesigned in their base 1500 and HD configurations. Logically, the Tahoe and Yukon are next.

For the moment, though, here’s the 2019 Graphite Edition of the Yukon SLT, an 8-passenger “station wagon” based on a truck chassis. While very little has changed as far as styling is concerned in the last few years, some revisions were made to the grille and headlamps last year; in the case of the Graphite Edition, most of the chrome has been painted black, including the massive 22-inch wheels and the roof rails.

But, we’re not done yet! This particular Yukon has the Performance Graphite option, meaning that under the hood lurks a 6.2L L86 EcoTech3 V8 engine that develops 420 hp and 460 lb-ft of torque, hooked up to a new 10-speed automatic transmission and a two-speed electrically controlled transfer case leading to a differential with a 3.23:1 final axle ratio. Oh, and it’s an all-wheel drive truck.

Add to that the Magnetic Ride that helps make this big rig as comfortable as a luxury SUV.  Our tester was equipped with Bridgestone Blizzak winter tires.

A fully loaded interior
With the Graphite Edition, we’re talking some pretty serious luxury here, in fact it brings the model within reach of the Cadillac Escalade. While the dashboard is carried over from last year and has styling that could use updating, it still offers a very comprehensive (and easy to read) instrument panel featuring an impressive screen used for the radio, GPS and backup camera. Add to that the possibility of Wi-Fi connectivity.

Unfortunately, one thing I wished for but didn’t find was a front camera, something Ford offers on its Expedition/Navigator that makes a massive truck like this easier to park.

There are knobs all over the dashboard and the (heated) steering wheel, right down to a rotary knob for the transfer case to switch to 4WD or to automatic AWD. The heated/ventilated seats are plenty comfortable and the view up front is great, which becomes all the more appreciated on long trips, certainly one of the reasons many people choose this type of truck.

This being an 8-person vehicle, the middle seat is designed for three passengers. The outer places are heated. The back folds 60/40 to helps transform the wagon into a van for all intents and purposes. To get that configuration the third-row seats can be folded flat using power commands in the cargo area.

Incidentally – and unsurprisingly - those last-row seats aren’t really comfortable for long stretches of road, unless the passengers are children. Legroom is a main concern. On the other hand, reaching the third-row bench is not too complicated, even if it does still requires a little bit of acrobatics.

With seats all in place, there is a decent amount of room for cargo or luggage. But in case more room is needed, there’s plenty of space to be found by folding down the last row. If you’re five or fewer, you’re all set for a comfortable long road trip.

For cargo loading, just fold the second row of seats as well and you get a flat floor that can accommodate a 4x8 sheet of plywood thanks to the large power rear hatch – although I found that the floor sill is a little high.

At the wheel
Climbing aboard the big GMC SUV requires a little effort, hence the running boards. Once at the wheel, the view is, as I said, breathtaking. The only problem for the driver is getting used to the dimensions of the truck, but the large amount of glass all around helps. To fire the engine, the Yukon Graphite has a button on the dash and by pressing it the big V8 comes alive. The exhaust noise is audible and distinctive, and far from annoying!

This big utility vehicle can accelerate from 0 to 100 km/h in some 6 seconds, and its passing power impresses thanks to the 10-speed transmission. By the way, this unit works wonderfully and it’s as smooth as can be. Frankly, if you start playing with the paddle shifters mounted on the steering wheel to change speeds manually, you’ll be wasting your time. The unit works just fine all on its own!

The truck has great handling for a vehicle its size, but its solid rear axle causes issues for the rear stability. Note that many competitors like the Ford Expedition have already adopted independent rear suspensions that not only smooth out the ride but also provide added legroom for third-row passengers.

Steering is relatively sharp for a truck of this type. Braking, though, is a bit thornier especially since the Yukon weighs more than 5,800 lbs. In the case of our tester, the truck was equipped with Bridgestone Blizzak winter tires that assured its mobility in snow and on ice. The tires we drove are definitely not too noisy and in return they provided great traction on the snow.

Incidentally, though the Yukon is a four-wheel drive SUV with good ground clearance, we did not take it off-road. I can say that older versions of the same truck have proved very agile in moderate situations in that environment. But I don’t want to mislead, this definitely is not an all-out off-roader. That said, it was of great help in deep snow!

Fuel consumption
Fuel economy is always a concern for vehicles of this category. In our case, as we drove it during a week of cold (with gusts to frigid) temperatures, the big Yukon used up an average 18.6L/100 km, even though the onboard computer calculated 15.6L/100 km (such a discrepancy is not uncommon in winter). By the way, the big fuel tank takes in 98 litres of gasoline (regular, thank goodness!)

Also by the way, did you know the Yukon is prized for its towing capability? The GMC SUV can pull trailers weighing up to 8,500 lb. 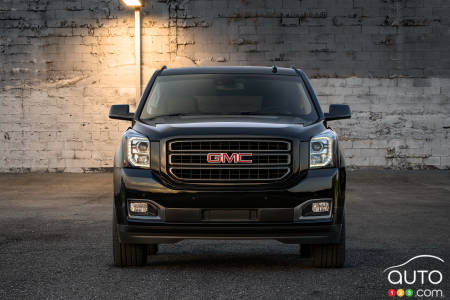 Not giving it away
The base price of a GMC Tahoe SLT is $70,400 in Canada. Our Yukon SLT tester, meanwhile, came with impressive options including the Graphite Performance Option that by itself is worth $7,495. Add a few more options and the invoice climbs up to $81,645 plus $100 for the A/C tax and $1,895 transport and preparation. Final number? $83,640.

We expect the next generation of the Yukon will bear a lot of resemblance to the new GMC Sierra 1500 pickup truck, including the dashboard and interior trim. But will it have independent rear suspension like many of its competitors? It would be such an improvement… 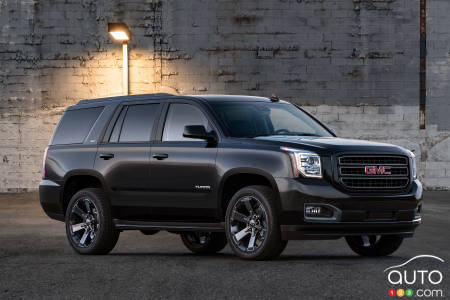 GMC Presents the Graphite Editions of its 2019 Yukon

GMC has announced Graphite Editions of its upcoming 2019 Yukon SUV, set to hit the market this summer. They will benefit from esthetic and mechanical modific...

The GMC Sierra is thoroughly new for 2019, but it disappoints, especially in its shortcomings in terms of the luxury it offers in comparison with competitors...