Ladies and gentlemen, I have driven the future.

No, it’s not a flying car. It’s not (fully) autonomous. It’s not even really that futuristic of a body style. It is, however, an EV – just not in the traditional sense.

This special car? Well, for starters, it’s not a car but a compact SUV, roughly the size of a Kia Niro or Honda CR-V. It’s the Hyundai Nexo and while the EV aspects of its powertrain do have it ahead of the competition, it’s the way those EV motors are powered that’s unique, and it boils down to one word and one element: hydrogen.

Here is the first mass-produced hydrogen-powered vehicle available to regular Joes like you and me – sort of. “Sort of” because its starting price -- $73,000 in Canada – is more Mercedes or Porsche money than it is Honda or Mazda. Such is the cost of innovation, however, and the Nexo is certainly innovative. 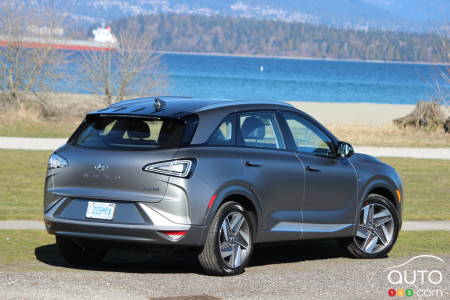 How it works
Basically, hydrogen is stored in three tanks – two below the back seats, one behind the rear axle – then used to power a 95 kW fuel-cell stack and 40 kW lithium-ion battery. All that serves to power an EV motor to the tune of 291 lb-ft of torque, which helps the Nexo reach 100 km/h from a stop in under 10 seconds, on to a 180 km/h top speed. Those aren’t huge numbers on paper, but as we’ll soon see, the Nexo is so much more than what the spec sheet says.

How it looks
First of all, there’s the styling. Its slim headlight lenses connected by a jewel-like bar that matches the taillight surrounds, triangular egg-crate grille, two-tone 19-inch alloys, matte grey paint makes for a kind of work of art, one that does a masterful job of mixing the future with the now.

Believe it or not, folks that buy cars and CUVs like this often don’t want to advertise to the world that there’s a futuristic powertrain lurking beneath the bodywork, so the Nexo is not garish. It does have retracting exterior door pulls, though, which is very chic. 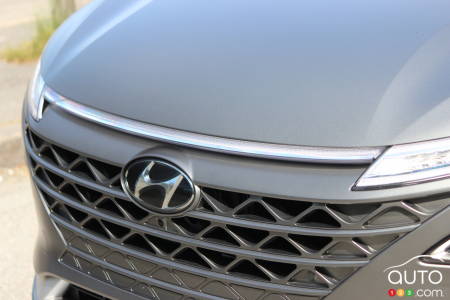 Inside
The Nexo is a little less bashful here; the cockpit is pretty much dominated by two elements: the button-loaded centre console and twin digital displays that serve as your gauge cluster and infotainment screen.

On that console you’ll find buttons for your transmission, climate controls, media controls and also a scroll wheel used to navigate the main display. There’s also a cupholder and storage unit for your mobile device; every inch is put to use.

I don’t mind all the buttons, but I do wish that they’d have found a way to fit another cupholder into the centre stack; instead, they’ve mounted a retractable over by the front passenger’s right leg, where it really does get in the way.

While the infotainment display houses all the expected stuff – navigation, media (with Apple CarPlay and Android Auto) and various power flow and charge meters – of which there are quite a few. There’s the futuristic menu that shows the three tanks at work, which often had me feeling like I was on some kind of a space ship. There’s the menu that shows you how much fuel you have left overall, and the display that shows just how and where your power’s flowing. It’s a lot to take in, and I suspect that most will do what I did: keep it on CarPlay, with cursory glances at the rest from time to time, especially on longer drives.

Size-wise, not only is there more room in the Nexo than there is in the Kona or Kona EV, but the model also beats the Tucson, both for storage and passenger space. One of the pitfalls of hydrogen remains how it’s stored. It’s not a problem on a bus, where tanks are often mounted the length of the roof – but more so in a compact CUV like this. The way they’ve broken a single tank down into three, then, is truly a masterclass in interior packaging. 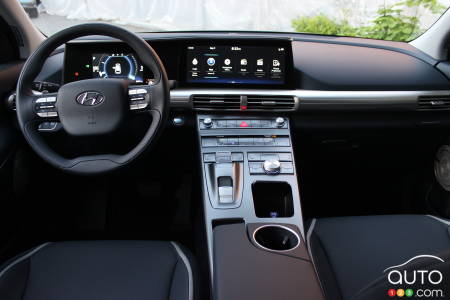 What’s more, both the back and front seats are comfortable for adults. I’m not 100 per cent on whether or not I like the bluey interior, however; it’s a little odd in that you can’t quite tell what colour it is. But it is a futuristic take, so I’m sure plenty will find favour.

While the infotainment display works as expected, the gauge cluster display is a whole lot of new. Chief among the additions is the existence, here, of twin blind-spot cameras; signal left, and the left side of the gauge cluster becomes a camera. Signal right, and the opposite happens. We’ve seen similar tech on Hondas, but their system only covers the one side. This once covers both, and the fact that it’s mounted within the gauge cluster just makes sense. It also isn’t blocked by the wheel spokes when you turn the wheel (as a backup cam would be), simply because you don’t turn the wheel all that much when you’re changing lanes. This is some tech I can really get behind, as it somehow feels more natural to look to the gauge cluster for it.

The drive
Basically, thanks to its direct-drive transmission, the Nexo zips forward with just a dab of the throttle; there’s no delay waiting for a turbo to spool or a lower gear to engage, just instant response from the powertrain. It doesn’t feel quite so instantaneous as speeds increase, but I can honestly say that I never found myself really wanting for more power. There was always enough juice to pass semis on the highway and so forth (especially if you’ve selected Normal mode, as opposed to the more restricting Eco and Eco Plus modes), and that’s all you really need from a vehicle like this.

Take note that you shouldn’t go flipping either of the wheel-mounted paddles thinking you’re going to be shifting gears. What they actually do is increase or decrease the amount of regeneration you experience while coasting.

Perhaps most critical in the Nexo is the ride and NVH levels for sound. EV vehicles don’t make much noise from their powertrain, so it’s on manufacturers to work extra hard to reduce wind and road noise. A look at that round, slick front end suggests that wind noise shouldn’t be much of an issue, and it isn’t, the Nexo slicing through the air ahead with little more than a whisper here and there. 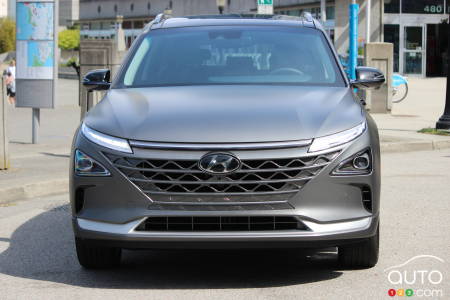 Road noise is similarly reduced thanks to those wheels which not only look the business, but have been developed to reduce drag. When you’re trying to build efficiency – as you do in an EV, whether hydrogen-powered or not – drag reduction is key.

Handling-wise, while you won’t feel like you’re driving a Porsche Macan, there are times where the Nexo does a good job of trying to shed its EV stigma. That was clear on a particular stretch of road that I travel often; it’s along the Sea-to-Sky highway just outside of Vancouver, on the way to Whistler.

Basically, a long downhill left-hander sweeps up into a righty, and it can unsettle vehicles thanks to the weight transfer. Not so much in the Nexo; it just tracked mostly true and while it’s not like you’re going to feel no body roll at all, it’s far from egregious. This is a well-planted CUV, make no mistake. 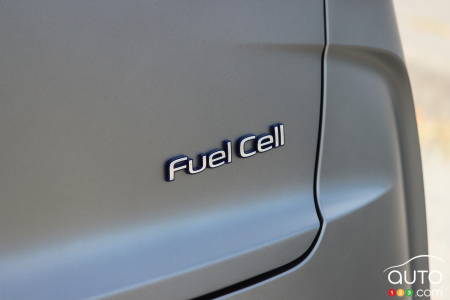 Right. The whole hydrogen-as-fuel-source thing
One of the main reasons Hyundai sent a Nexo for us to test in Vancouver is because it is one of the only areas in Canada that has a hydrogen fill-up station that can be used by anyone. It’s pretty much in the heart of the city at a Shell station, but pulling up there, you may not know it.

I was expecting some fanfare to the effect of “Hydrogen here! Only spot in Western Canada!” (Quebec City, by the way, is the only other spot in all of Canada), but no dice; I pulled up to the large, fenced-in area at one corner of the lot thinking that’s where the hydrogen happened, but I was only partly right. It’s in there that the hydrogen is stored, but it’s not where you access it. I had to ask inside how to do that, only to be greeted with pretty dumbfounded looks because the hydrogen fill tank is right there in plain view, between the regular pumps.

Once there, you input your PIN (every Nexo owner gets one), make sure you’ve properly sealed the pup to the tank by inserting and locking it in place as you would a traditional gas pump in the old days, and you’re off.

Filling up a quarter of a tank took me about five minutes; hydrogen is measured in kilograms, and I used about 1.8 kg of hydrogen over 115 km; the cost at the time was $12.75 per kg, so that I spent $23.27 on a fill up. Compare that to what you get on most fuel fill-ups, and it’s not exactly sterling, but it’s not terrible either.

And, of course, there’s always the fact that with traditional petrol, you’re emitting CO2; with the Nexo, you’re actually cleaning the air of CO2 – it’s part of the process – and the car even tells you how many kg of fresh air you produced after a given drive. No waiting half an hour for a charge, no range anxiety. Just fill up and go. 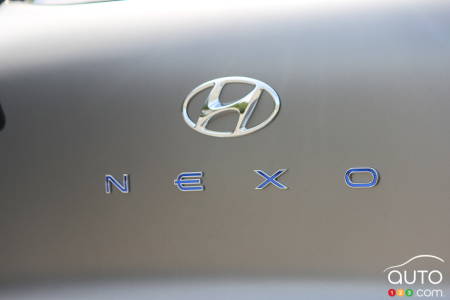 Of course, the question remains as to how well the hydrogen infrastructure can support this tech. As of right now, you only have the two spots as we said, but keep in mind that the Nexo is the only hydrogen-powered car you can get in Canada, although it’s soon to be joined by the previously limited Toyota Mirai as well as the Honda Clarity FCEV that’s been available in the US since last year.

As more and more hydrogen cars become available, you have to think that the infrastructure will evolve because chances are the manufacturers wouldn’t be releasing these if they knew there was never going to be an infrastructure to support them.

For now, know that the Nexo – space-agey as it may seem on the powertrain front – is an everyday-usable CUV with a little extra peace-of-mind that comes with knowing that all that you’re producing as you cover the clicks… is water. 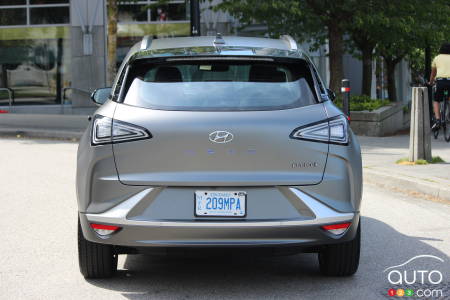 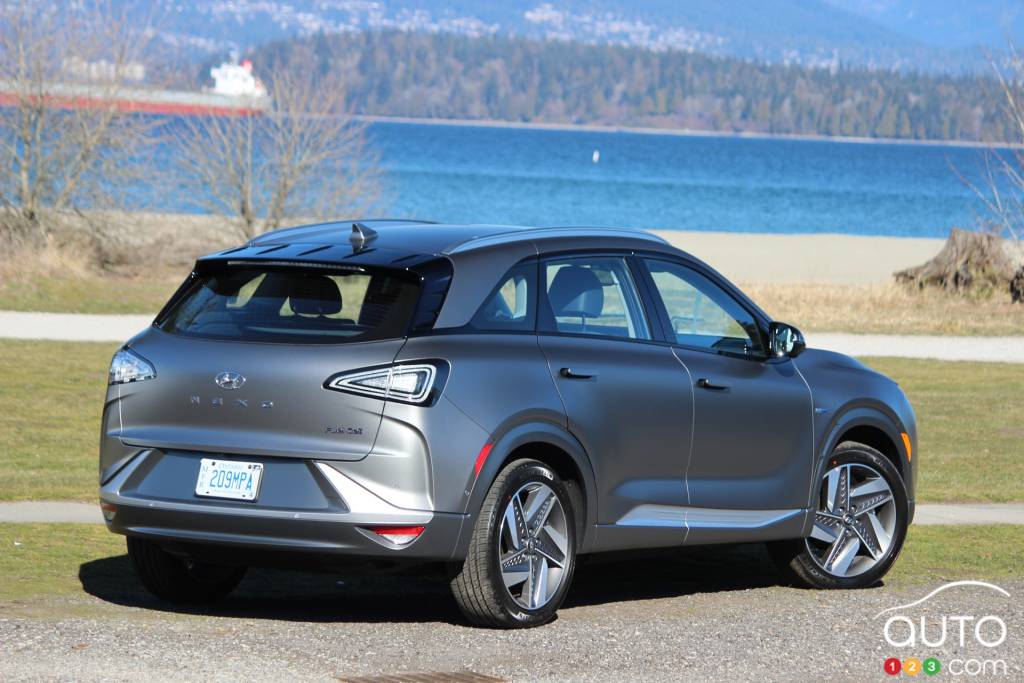 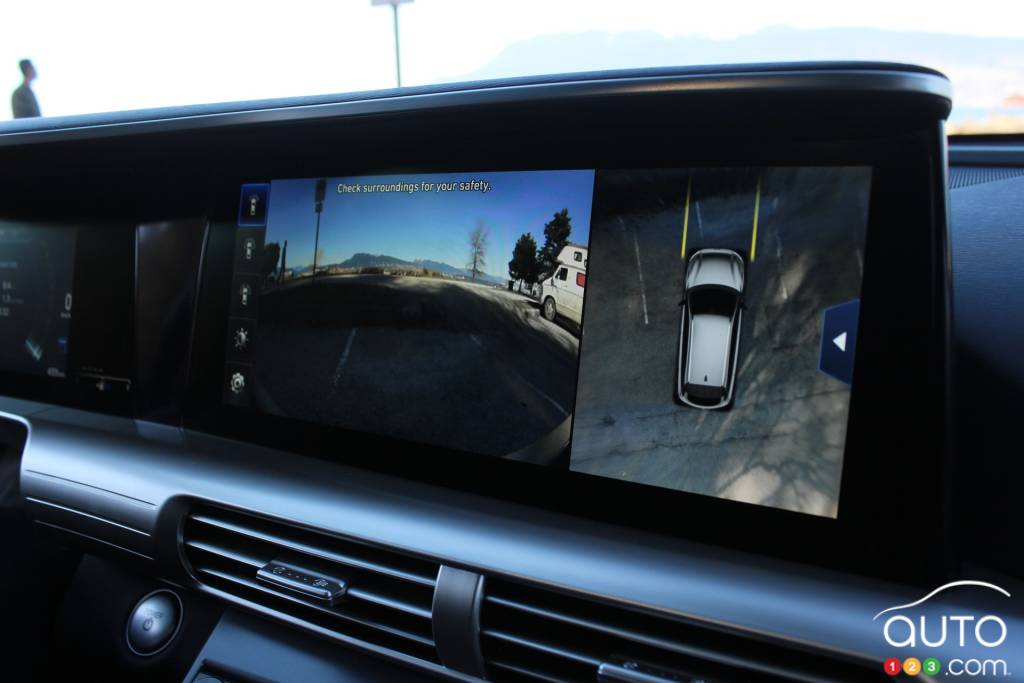 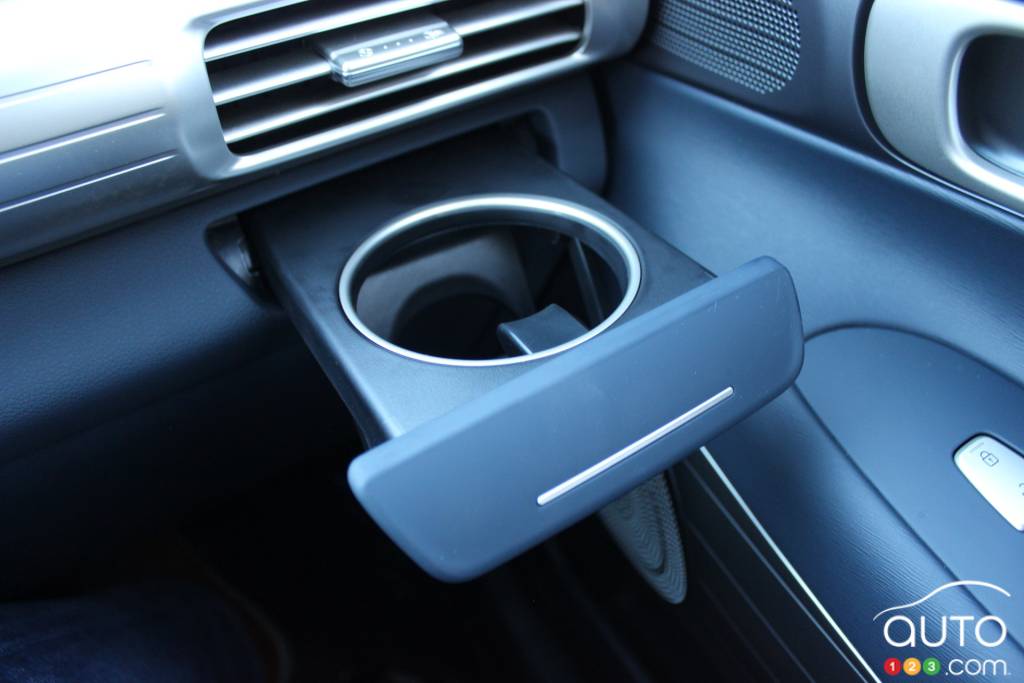 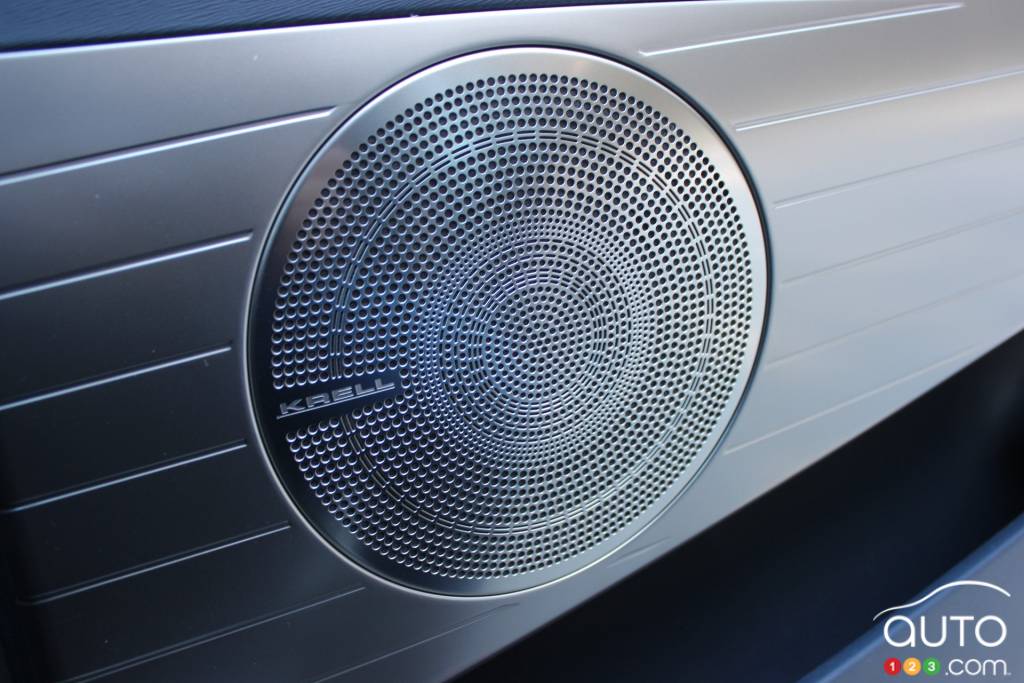