Hybrid technology is invading the automotive sector, and no segment seems immune. For now though, the Mitsubishi Outlander PHEV sits virtually alone in the category of plug-in SUVs. Which makes it less surprising than it might seem for a smaller manufacturer like Mitsubishi to own the best-selling hybrid vehicle in Europe, and a particular favourite of Canadian consumers who want some serious fuel economy to go with the advantages a utility model provides.

Clearly, the principal selling point of the Outlander PHEV is that it’s an SUV you can plug in for and run on electric power. It’s also true that the model has other things going for it; its interior layout and size makes it versatile, and you’ll like how much less you pay in gas per month. But we can’t help but feel like this new edition of the Outlander PHEV could still take it to another level.

Specifications of the 2019 Mitsubishi Outlander PHEV Few changes, despite the need for some
We’d like to tell you that the Outlander has been deeply renewed for 2019, but that would be largely untrue. Yes, there are new LED headlights and new alloy wheels, but apart from such details, it’s pretty much exactly the same as the outgoing model.

Inside is largely the same story of the same… story. No big changes are discernable, which means that you get the good elements of the old Outlander PHEV but also the bad. Anyways, according to Mitsubishi the model’s owners love it, and it’s true that demand continues to grow for the model – possibly boosted further by the new rebate program instituted by the federal government. So why change something that no one feels is broken?

Space galore… in front and in the trunk
The 2019 Outlander PHEV is a spacious enough vehicle, and the impression is heightened by the presence of large door openings. The front seats are plenty comfortable and power adjustable, not just for the seat and back but for the knee cushions as well. This is not an environment that feels confining – in some respects it feels almost, dare I say it, minivan-like. The front passenger seat is equally spacious and welcoming. It’s in back that things are a little pricklier, however. You could actually fit three adult back there, but they wouldn’t be thrilled about it. The seats are fairly narrow and they’re placed quite high up in relation to the floor of the vehicle.

Wherever you sit, you can’t shake the feeling that some corner-cutting was required to pay for the nifty hybrid powertrain. Some of the materials used feel a little low end, and there are buttons and knobs that are harder to reach and manipulate than they should be, almost as if they were placed in willy-nilly fashion. In terms of ergonomics, there’s work to be done.

On the plus side, the menus for setting the vehicle’s parameters allow for extensive personalization of the displays for the driver, which is not a given in vehicles of this type.

Lots of standard equipment
The Outlander PHEV comes with those power-adjustable heated front seats, a keyless locking system, push-button start, dual-zone climate control and Apple CarPlay and Android Auto. That these systems come installed without having to turn over another pound of flesh is to be saluted. 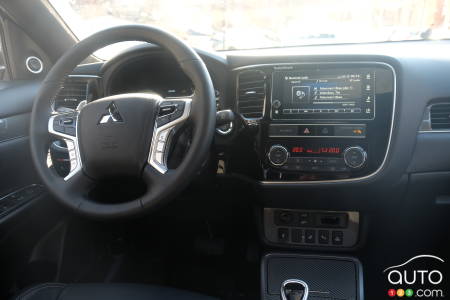 The base version gets a 6-speaker audio system, which can be switched out for a 9-speaker Rockford Fosgate system in the GT trim.

That GT edition also gets a standard power sunroof, heated steering wheel, multiple angle backup camera and two electrical outlets. All welcome features, which help make the GT the most compelling model in the lineup in our book.

The two Outlander PHEV versions get a standard 7-inch screen, on which the menu structure is not particularly intuitive I should add. The response time of the screen also leaves something to be desired – which is a shame given the presence of the well-functioning Apple CarPlay and Android apps.

Two rows
The Outlander PHEV doesn’t get the three rows of seats that the gas-only model does, mainly because space had to be found somewhere for the battery pack and electric motor. I also found that the interior could have done with a few more practical storage spaces. In the back, however, the available cargo space is ample - no complaints there. Safety and drive-assist systems
Each of the 2019 Outlander PHEV models gets systems like blind spot monitor with lane change assist and rear transversal traffic alert. The GT version is equipped with forward collision alert with pedestrian detection, automatic emergency braking and adaptive cruise control, plus a few more.

Now, it’s true that the GT requires a bigger outlay of cash, but even factoring that in it is a superior product for the money compared to the base version. There’s just a lot more standard equipment and safety features in it.

The powertrain
For 2019, the Mitsubishi Outlander PHEV comes in two plug-in editions, the SE and the GT. Both are powered by a 2.0L 4-cylinder engine working in conjunction with two 60 kW electric motors, one working on the front wheels and the other on the back two. Charge the battery up fully and the system gives you 22 km of all-electric driving, although of course that can vary wildly depending on the weather, the road conditions and whether you’re driving city or highway. The Outlander PHEV can be charged on any regular outlet or at a designated charging station.

22 km is almost derisively little, if what you intend is a lot of all-electric driving. But that’s not the intent of this system, of course. Rather, it’s designed to minimize your fuel use while using electric power in the most appropriate situations. The system will do it all automatically for you, and you get to benefit from far fewer visits to the pump than you would in any other SUV out there.

To wit, Mitsubishi’s official figures put fuel consumption for the Outlander PHEV at just 3.2L/100 km (combined). Real-life driving almost surely will never get you to that, but it’s pretty impressive nonetheless. 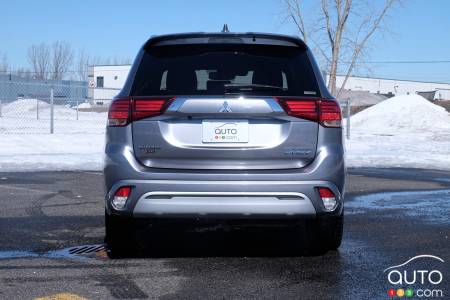 On the road
The Outlander PHEV is, by its nature as an SUV, the plug-in hybrid vehicle best suited to handle off-roading duties. In any environment, the hybrid powertrain handles switching between the different power sources in full discretion. That said, that powertrain has it hands full managing such a heavy vehicle. That weight slows down the vehicle and you can hear and feel the combustion engine working extra hard to lug the Outlander around, simply because it lacks the needed raw power.

On the other hand, the electric motors deliver decent acceleration at low speed. And of course, the Outlander becomes stealthily quiet in the city when it’s running on electric power.

EV driving mode, as mentioned, allows for doing just so and avoiding using even a drop of gas. Until the charge runs down, which it does quickly (22 km, remember?). The competition
What competition? Really, though it has its faults, the Outlander PHEV is just unlike other options out there. For example it is still the only plug-in hybrid SUV that works with all-wheel drive in all-electric mode. So, for now, there are really no valid comparisons to be made with other utility models on the market.

That, though, is certain to change. Already, folks can opt for the hybrid version of the immensely popular new Toyota RAV4, or, if they’re willing to scale down in size, take a look at the Kia Niro plug-in hybrid crossover. Conclusion
The few changes made to the 2019 Outlander PHEV don’t cover the several aspects of the model that could use an update/upgrade. Those elements will have to be addressed if Mitsubishi wants to maintain the model’s popularity as new rivals start to pop up on the market. The version of choice for us is clearly the GT, which offers quite a bit more bang for a little bit more buck.

•    Generous offering of standard features and equipment in the GT version
•    Driver can control when to drive in all-electric mode (though 22 km won’t get you far)
•    The competent all-wheel-drive system that gives the vehicle great stability
•    Ample cargo space, good versatility inside 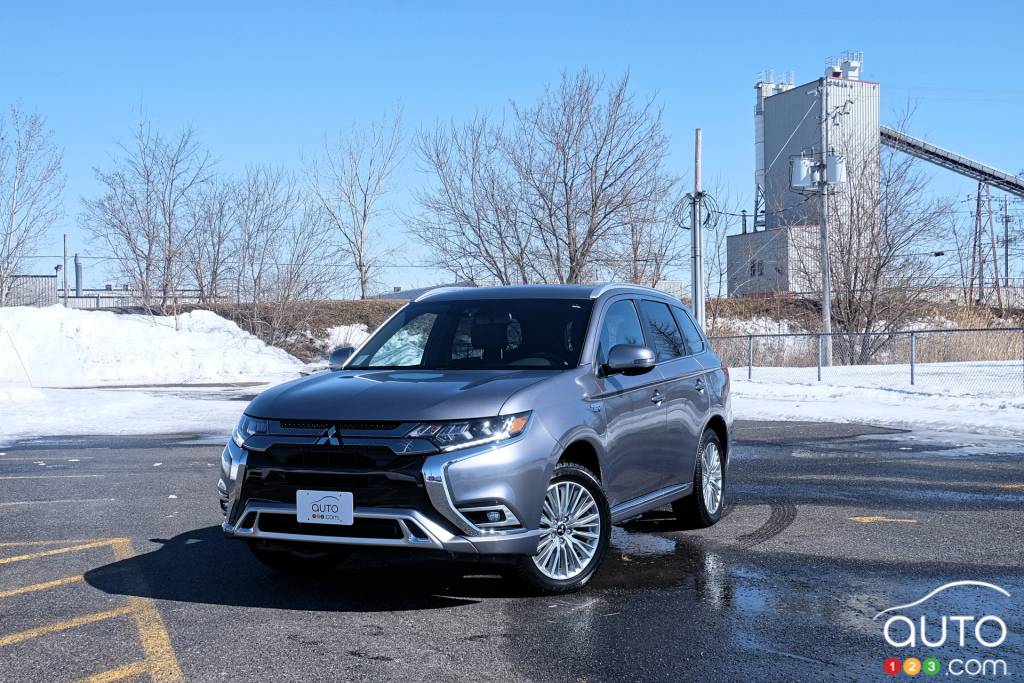 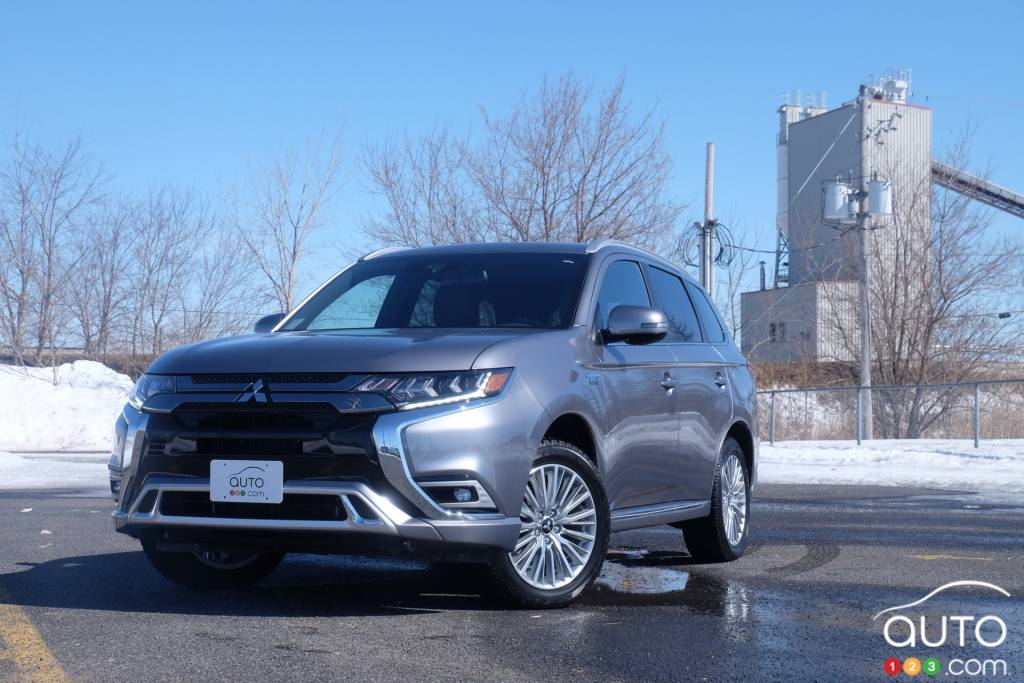 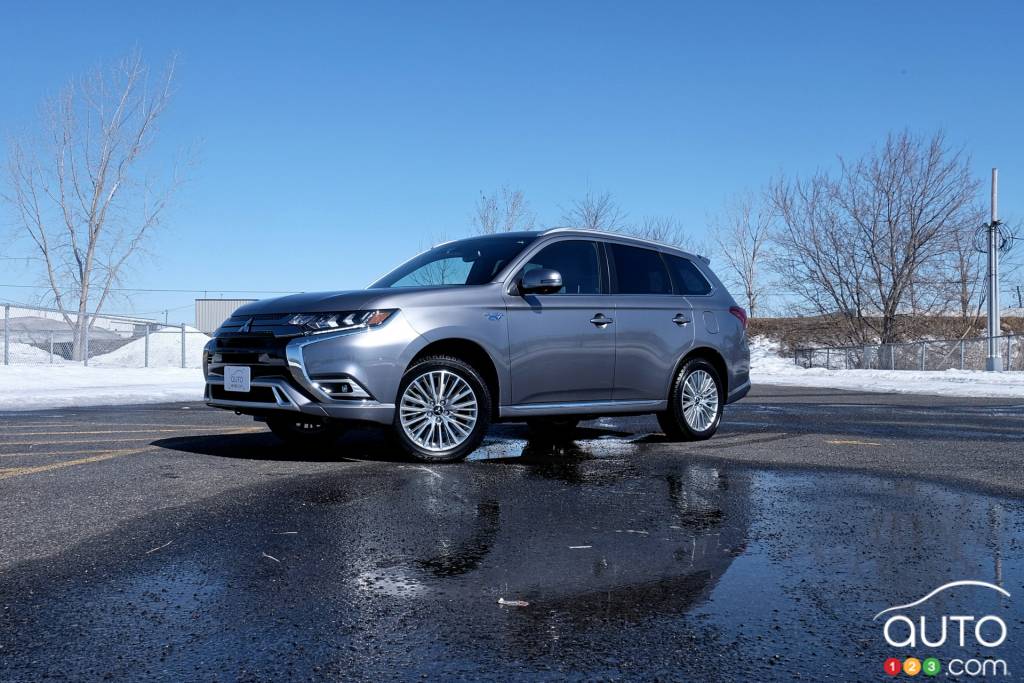 Mitsubishi has teased a first image of the Engelberg Tourer SUV concept that it will debut at the 2019 Geneva Motor Show in early March. The design study wil...