I can’t say that I’ve always had a positive impression of Kia. My experience with the South Korean brand got off to a rocky start when I bought my very first car, a 2002 Kia Rio. I was just 17 at the time, and Dad figured the Rio was the best choice for me… for the price, naturally. I couldn’t stand the car. Maybe it was having to climb in by the passenger side just two weeks after buying it, after the driver’s side door handle came off in my hand, that did it…

Just a door handle, you might say. If only it ended there! No sooner did I get the handle repaired that the passenger-side handle came off! Within a few months, the engine had died. I had the engine changed, an expense that took me months to pay off. And then six months later the same thing happened. I was getting the oil changed regularly, I was a good (if not perfect) driver. I was majorly discouraged, so much so that I gave my Rio away. I couldn’t even be bothered to sell it for parts, all I could think of was getting rid of the damn thing! I understand rationally that I had likely just had the misfortune of getting stuck with a lemon. But the episode left a bad taste in my mouth RE all things Kia.

Today, as the automaker’s place in experts’ rankings continues to climb, Kia seems to be returning to my good book! This axiological phenomenon was set off in my brain last week as I spent two days trying out the new 2019 Kia Sorento in Ontario’s Muskoka region. It was 16 years after my youthful misadventure with that old Rio – 16 years of progress and catching up vis-à-vis its competitors for Kia. When I see how far the automaker has come, I can’t help but appreciate the interesting options its models today provide for consumers. Our two-day trak in Muskoka was the first occasion to try out the model on Canadian soil - check out our early first drive of the model earlier this spring in the U.S.!

Old emotions aside, I decided to focus solely on the rational arguments Kia’s models make in their favour, notably by providing quality at a reasonable price.

Here then is my humble impression of Kia’s new Sorento! First off, the new edition is not significantly different than last year’s model, but the minor changes are justified. Remember that this able SUV is the best-selling utility model in the Kia lineup, and has been for several years, so why change anything drastically? It’s certain that, with the few improvements that have been made for 2019, the Sorento will continue to meet the needs of Canadian families.

In terms of esthetics, the 2019 edition features new alloy wheels and a new fascia, with two different front grilles. In back LED lights are new, as is a remodeled bumper, though you’d be hard-pressed to notice the difference with the 2018 model.

This year buyers can choose from four different versions of the Sorento. The top-end SX and SXL variants get chrome trim and redesigned anti-fog lights. What hasn’t changed is the model’s pleasant-looking profile.

Inside, Kia has upgraded the Harman Kardon audio system in the SX and SXL trims, which also get an 8-inch multimedia screen (instead of the standard 7-inch screen. All models now get Apple CarPlay and Android Auto, as well as heated front seats, access to multiple drive modes and a backup camera (the range-topping model also gets a 360-degree camera system. Al ltold, the roster of included equipment is impressive. This is a highly evolved and well-equipped SUV technology, without the price skyrocketing out of the realm of the reasonable.

Kia has, for 2019, added a third row of seating for some versions of its Sorento. Actually, I read somewhere on another well-known automotive site that it was possible to buy a three-row 2019 Kia Sorento for as little as $32,495, with all-wheel drive. I’m afraid that is not the case! The third row is only available starting with the LX version equipped with the big V6 engine, which comes in at $36,695 (MSRP). Good to know. In any event, the question is, is there sufficient space to accommodate all occupants adequately? Let’s be clear, that third row is appropriate especially for small people, as in kids!

The finishing of the interior, meanwhile, is surprisingly good. The Sorento is nice-looking, its central console is ergonomically arrayed and its commands, buttons and systems are easy to find and use. Considering that its starting price sits at under $30,000, this is one model that will make even someone like me reconsider the Kia brand!

The EX Premium version features a hatch that will open automatically upon simply approaching it, fob in hand (or pocket). Get close to the Sorento for three seconds, and the system detects your presence and opens up the hatch. The idea is great; unfortunately it didn’t work on every occasion, which can be frustrating when one of those occasions is when you’ve got your hands full of bags or heavy objects!

This compact SUV provides an impressive volume of space; I found myself assuming it belonged to a bigger category. In fact, the 2019 edition of the Sorento has gained 40 mm of cabin space, and i’s not that far from fitting into the mid-size SUV segment. That the model sits practically on the fence between two categories makes it kind of unique, and allows it to respond to the needs of families in search of a compact SUV’s versatility and practicality, all while meeting the requirements of consumers who need that third row for larger group outings.

There are two choices available. Replacing the 2.0L engine that powers the current Sorento, Kia is offering for 2019 a 2.4L 4-cylinder generating 185 hp and 178 lb-ft of torque, as well as a 3.3L V6 (290 hp, 252 lb-ft). The smaller engine comes with an 8-speed Sportmatic automatic transmission, while the V6 gets a new 8-speed version. For our first encounter with the model, Kia – no surprise – gave us a V6-equipped model with all-wheel drive (only the LX base model with front-wheel drive doesn’t have all-wheel as an option).

I appreciated the capabilities of the engine, which proved fuel-efficient; it averaged 9.6L/100 km on small country roads. At low speeds the 8-speed transmission had its share of struggles, but once the pace increased it did just fine. Now, the Sorento doesn’t bowl over with its performance, but it was more than competent. Driving is pleasant in Sport mode, but when in Eco, Comfort and Intelligent modes, the Sorento was sluggish from a stop, to the point of irritation. Overall, though, I found its handling pretty reasonable, it just requires some adapting to its gear-shifting habits at low speed.

Can’t tell you much about the 2.4L – I didn’t try it. But based on my experience with the V6, it’s hard to imagine how the 4-cylinder could improve on the driving experience the Sorento delivers! Another bit of information you might want to know, and was surprisingly hard to dig up: it has a towing capacity of 5,000 lbs (my guess is, it’ll take the V6 to accomplish that). I would be curious to see how the transmission handles things when it has a heavy extra load to pull.

Overall, for the price point, the 2019 Sorento is a spacious compact SUV that definitely offers more than do the others in its class. Given the generous list of standard equipment it comes with, and even though it’s not the most luxurious or sporty model in its category, it merits a spot on buyers’ short lists. In terms of value, the Sorento makes a convincing case for itself. I haven’t even mentioned that it earned the IIHS’ Top Safety Pick+ - perfect for maximizing peace of mind!

Kia has been offering increasingly attractive products to consumers in recent years, not only by providing economical options across the range of vehicle categories, but also by constantly improving its models, year after year. In the case of the Sorento, it’s to understand why Kia didn’t want to mess too much with the winning formula that current model represents. For my part, I’m happy to bury the hatchet and make my internal peace with the brand! I encourage Canadian families to check out the LX and EX versions of the Sorento, which feature a host of elements at a great price. I mention these specifically because, in my view, the upper-range SX and SXL trims may just be too pricy for what they offer over the base models. 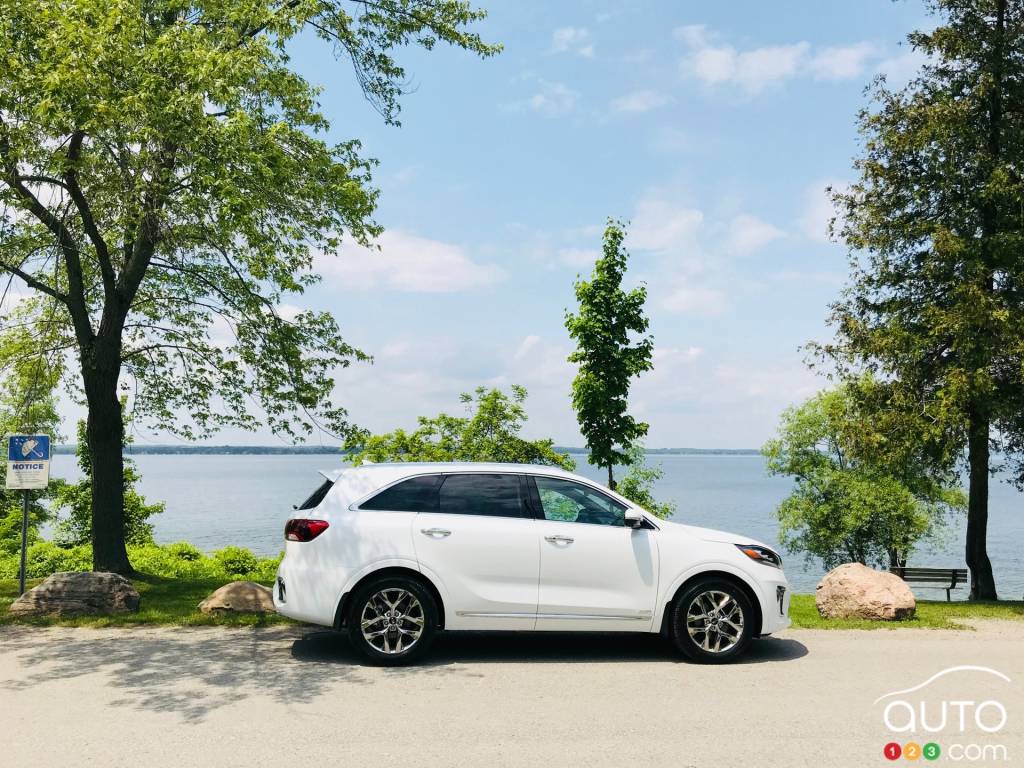 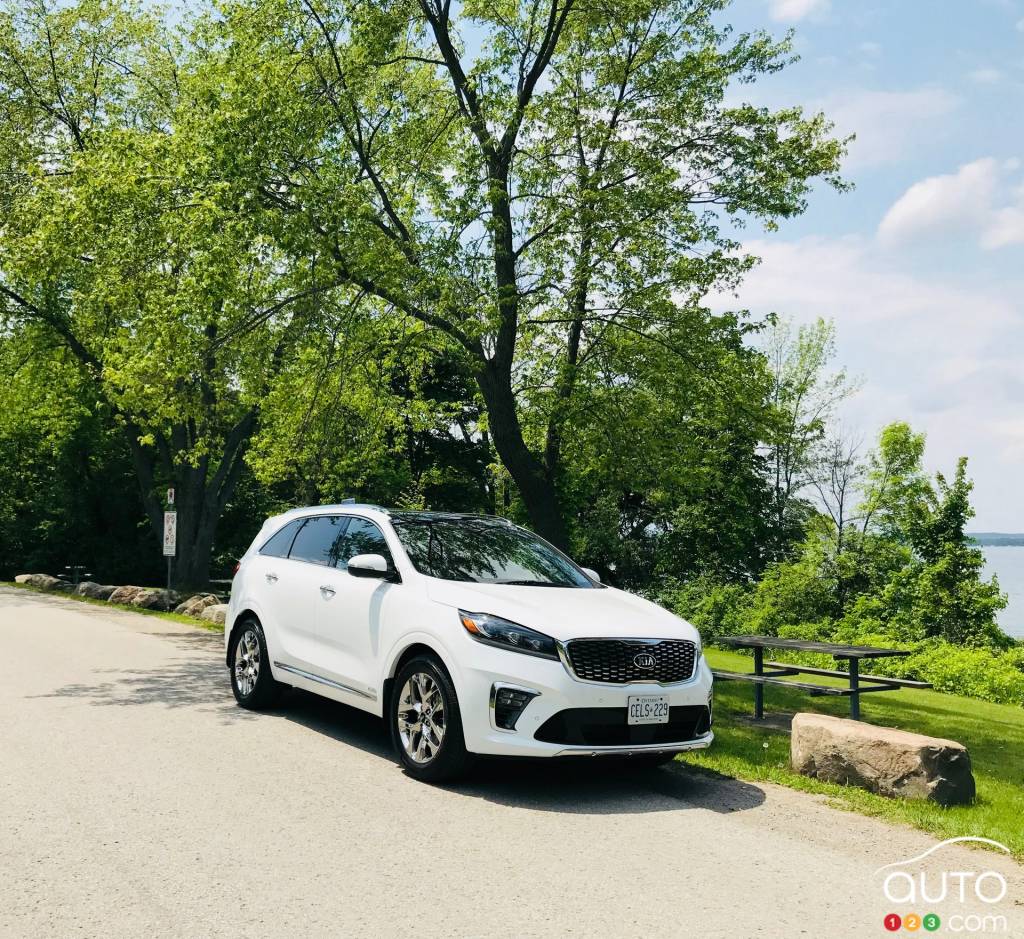 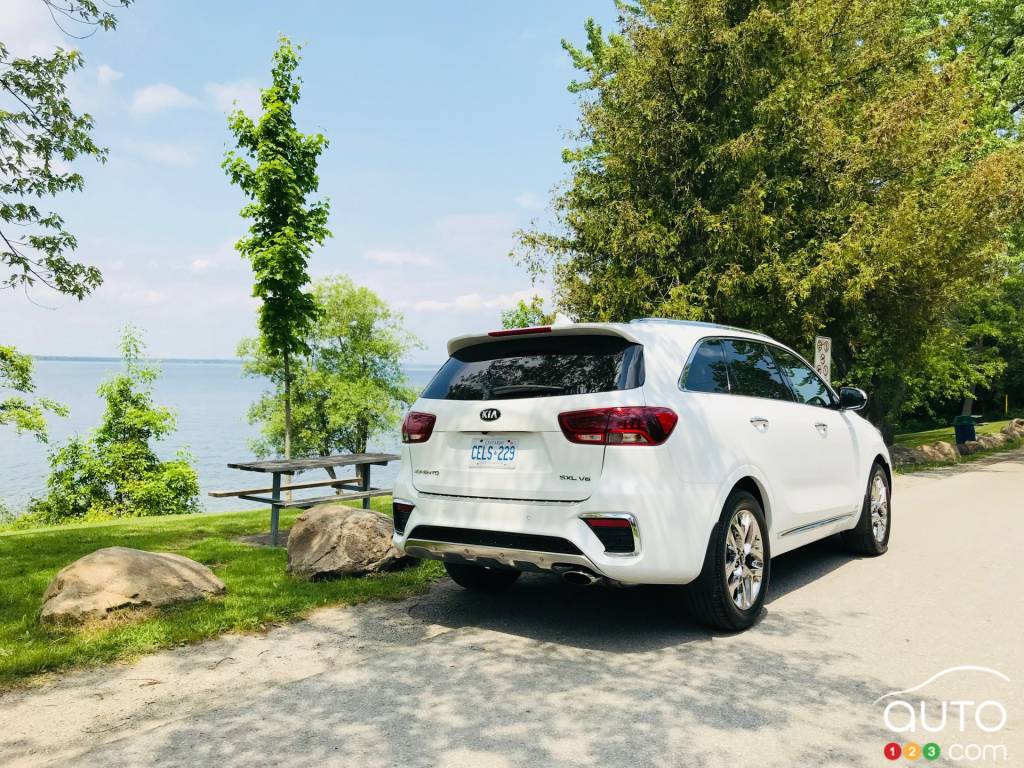 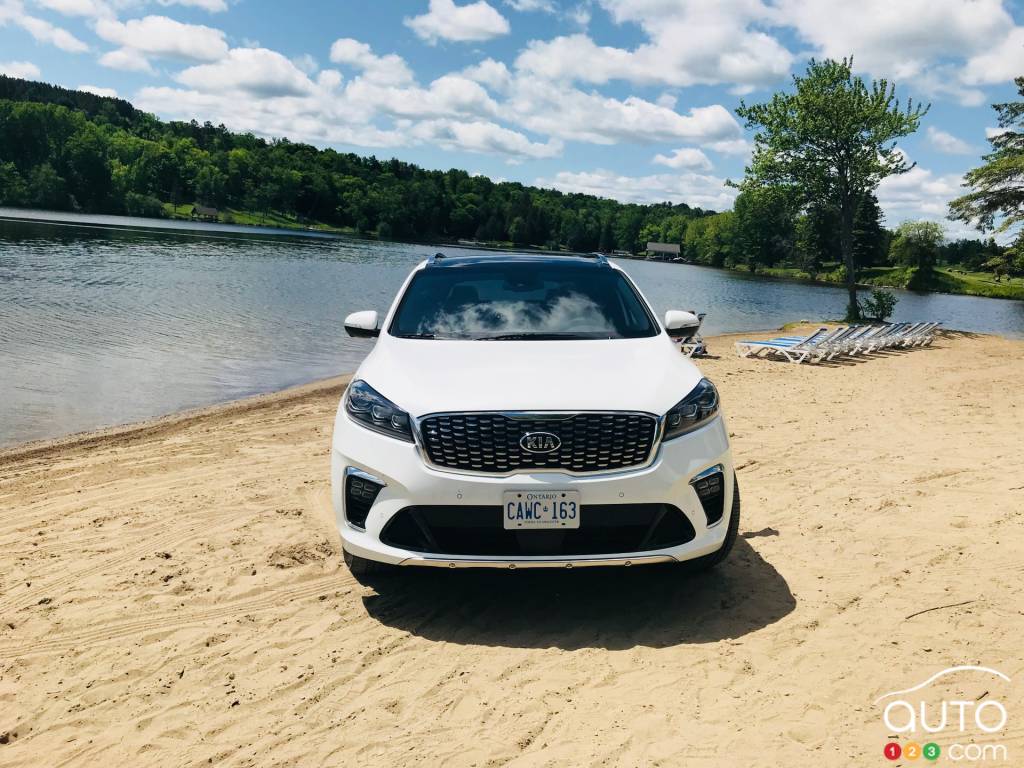 Photos:K.Lajoie
Photos of the 2019 Kia Sorento
See the complete Gallery

Our first drive of the new 2019 Kia Sorento reveals a refreshed but largely intact new edition of a highly popular three-row people mover that provides one o...