The Porsche Cayenne was the cause of some controversy when it first hit the market in 2002. To purists and lovers of the brand, known above all for its sports cars, proposing a luxury SUV was an iconoclastic if not heretical gesture on the part of the automaker. Fans of high-end utility vehicles, meanwhile, were skeptical.

And yet, the model was a complete success. The first generation sold over 270,000 units between 2002 and 2010; the second generation has been even more popular, attracting 500,000 buyers up to now. The commercial success of the Cayenne has brought in a new clientele to the brand and compelled competitors to take an interest in SUVs, as well as helping Porsche’s bottom line and allowing it to develop new models and new technologies.

These new technologies are now integrated in the third-generation 2019 Porsche Cayenne, which will hit the market in summer 2018. The mission of the new Cayenne is to deliver the driving dynamics of a sports car, the comfort of a sedan and the off-road capabilities off an all-terrain, all-conditions utility vehicle.

To learn more, Auto123.com was invited to attend a presentation of the technical specifications and features of the all-new Cayenne.

Firmer and more aerodynamic frame
While the vehicle’s shape remains the same, more or less, its front end has been modified, notably as concerns the grille, now sporting longitudinal bars. Behind these are moveable flaps that open or close to optimize the car’s aerodynamics depending on speed. Another detail: at each extremity of the front end, other flaps are lodged in independent modules.

To further improve aerodynamic efficiency, a movable spoiler on the upper part of the hatchback is deployed at a degree that varies according to the speed being driven. It even serves to help in emergency braking situations, reducing stopping distance by a few metres.

The frame of the 2019 Porsche Cayenne is practically all of aluminum, with the presence of steel parts and extrusion components ensuring greater resistance to impacts. In addition, the various methods of fixing components in place – laser soldering, the use of rivets as well as more-conventional methods – are designed to increase the rigidity of the body. The end result is 65 kg less weight, which is all the more impressive given the number of technological add-ons.

Innovative kinetic group
The newest Cayenne is available in three engine configurations, all derived from the new Panamera: a 3.0L V6 turbo producing 340 hp, a 2.9L V6 twin-turbo delivering 440 hp and a 4.0L V8 twin-turbo whose 500 hp help produce a 0-100 km/h acceleration time of just 3.9 seconds and a top speed of 286 km/h.

All of this cavalry is harnessed by a new 8-speed Tiptronic S automatic transmission. Entirely electronic, it delivers quicker changes, which are adapted to the drive mode selected. Top speed is attained with the sixth gear, the other two being overdrive gears.

Other elements worth noting are the active anti-roll bars, directional rear wheels, larger tires (different in front and back) and the active three-chamber air suspension.

Drive assist systems
All vehicles these days come equipped with multiple drive assist technologies. And given that Porsche’s aim was to be able to lay claim to the most sophisticated SUV on the market, it’s hardly surprising that the 2019 Cayenne is stuffed practically to overflowing with highly advanced systems.

I don’t have enough space here to even list them all exhaustively, but in my book one of the most important is the off-road driving management system, which includes the Normal, Gravel, Mud and Rocks drive modes. These options are further expanded when taking the Off Road package, which tunes the suspension more finely while displaying the direction of the wheels.

The adaptive cruise control maintains a pre-set distance between the Cayenne and the vehicle in front of it, and stays active even during stops and starts. Is functioning range, in fact, is between 30 and 210 km/h! The presence of this system furthermore allowed Porsche engineers to devise an even more sophisticated system: InnoDrive. Partnering with the adaptive cruise control and the GPS system, InnoDrive manages speed, gear changes and braking for the upcoming three kilometres of road. Developed internally by the automaker, this module inches ever closer to a true self-driving system.

When driving outside urban areas, the Cayenne uses a night vision system to detect pedestrians and animals ahead of the vehicle. The system does not function in the city in order to avoid sending false alerts.

A test… in the passenger’s seat
Attendees at the presentation, which took place at the training centre of the ADAC (Germany’s equivalent of the CAA) in a suburb of Düsseldorf, were not given the opportunity to actually pilot the new 2019 Porsche Cayenne. Our consolation prize was a “taxi test” on the centre’s track and trails. Meaning we got to sit as passengers in a Cayenne driven by a test driver, whose aim was to demonstrate to us the dynamic capabilities of the next generation of the SUV.

When accelerating, sliding on the wet track, climbing a bumpy, rocky hill or at speed on the asphalt, the large all-purpose SUV from Porsche performed with the same phlegmatic ease.
Somehow, this two-ton colossus behaves like a sports car, and it doesn’t hesitate to take on off-road challenges. Not only that, it can tow up to 3,500 kg aided by precision brakes, and accommodate up to 1,710 litres of cargo. As for the premium interior, decked out with sport seating and steering wheel as well as a 12.3-inch screen display, comfort level in there is, to say the least, high. We also noted an improvement in the ergonomics of the cabin overall. 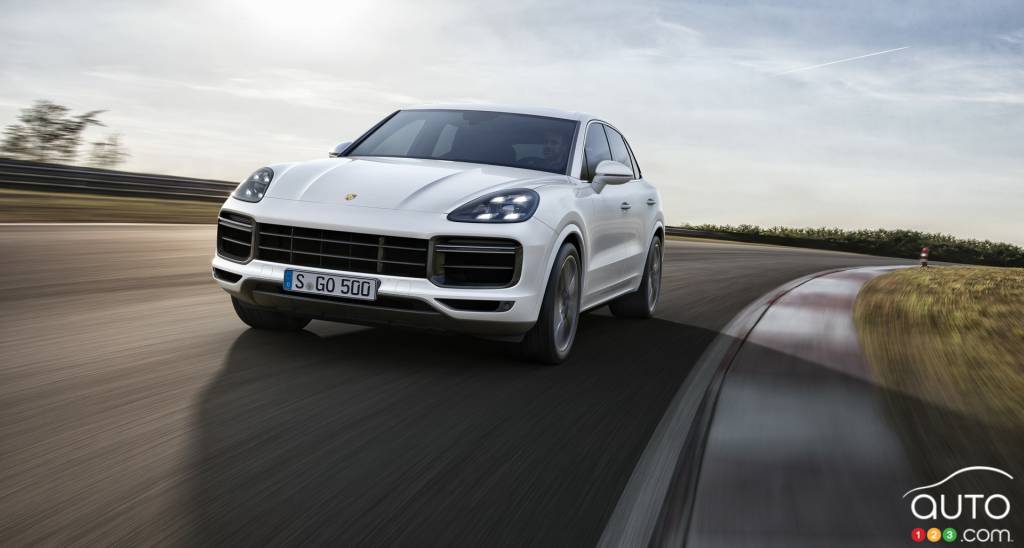 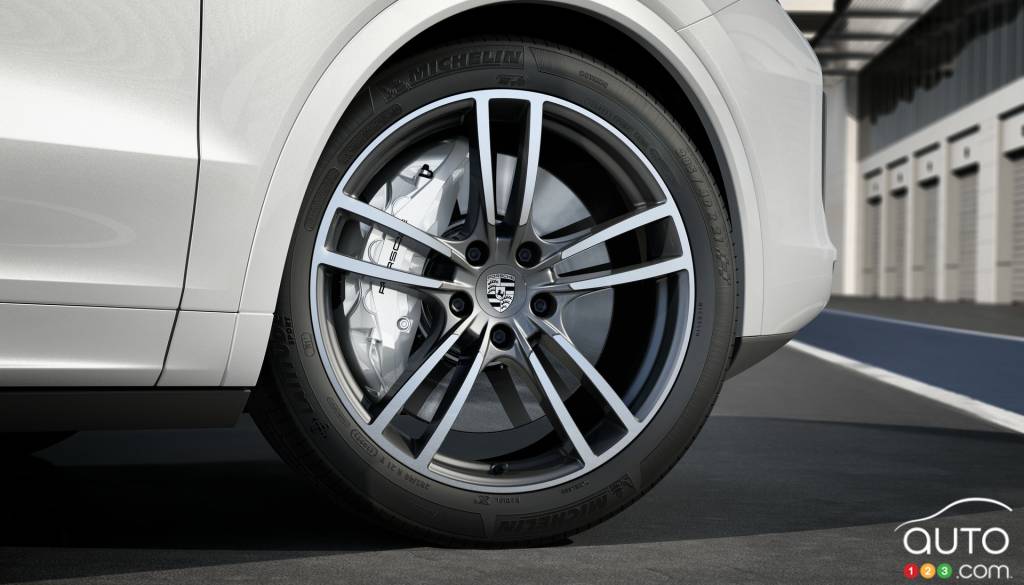 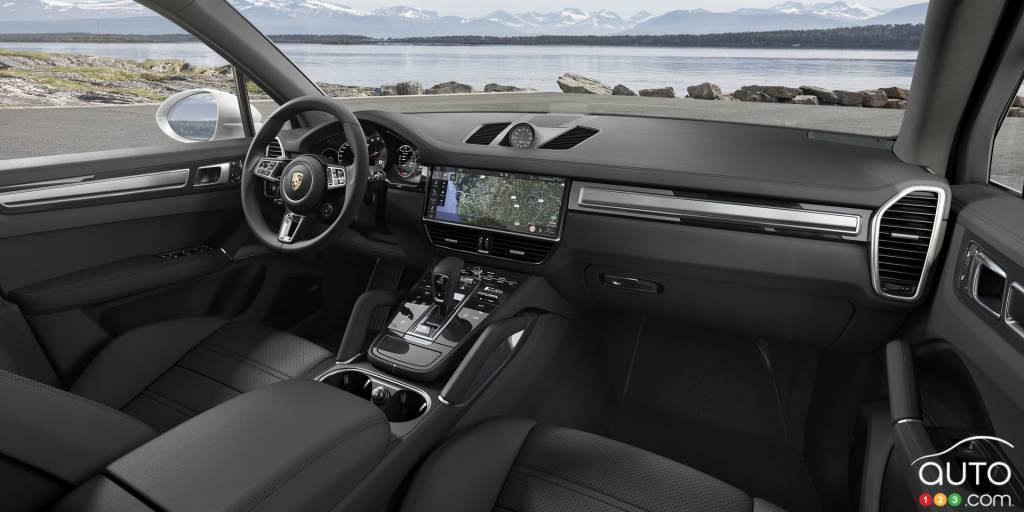