However, when it comes to the toughest pick-up trucks in the Class 2 category (the F-250 and HD 2500 pick-up each have a total authorized weight with load of 10,000 lb or 4535 kg), there are the three Americans players - Ford, GM and FCA – and no one else. And the battle between them is pretty fierce; we’ve seen a veritable arms race with the main weapons being not only cargo and towing capacities but also finish and design. 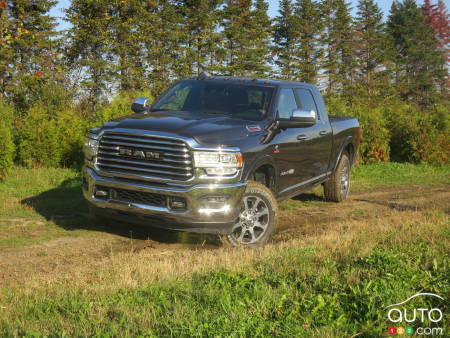 Raised expectations
Indeed, some twenty years ago, a truck of this calibre was a pure work tool that didn't differ much from other pick-up trucks, for instance with its rather modest finish. Over time, however, consumers began to demand more luxury and comfort in the cab, with their large pickup trucks now playing two roles, that of a work tool and that of a personal vehicle.

The competition between the three big manufacturers is even more evident this year as each offers us large Class 2 and Class 3 pickup trucks (the latter having an even greater load capacity, often with dual wheels in the back) that have been redesigned or reworked and, in almost all cases, equipped with revised mechanics.

One of the first to attack the market this year was Fiat Chrysler Automobiles (FCA) with its fully redesigned Ram HD 2500 model, which doesn't share any cabin parts with the Ram 1500 and features an even more elaborate interior than before as well as revised mechanical components. The most prominent feature of the big Ram at first glance is the huge grille, in keeping with the trend in the segment. The overall design is tasteful and eye-catching. The Ram HD 2500 test vehicle we drove was a 4-door Mega Cab configuration, the most notable feature of which (and unique to the brand) is the rear-seat extension.

Longhorn
The Ram 2500 Mega Cabs come with a regular 6ft-4in body. However, this Ram boasts a very high-end Longhorn finish that, in addition to some chrome exterior trim, includes a luxurious interior worthy of the finest limousines on the market. 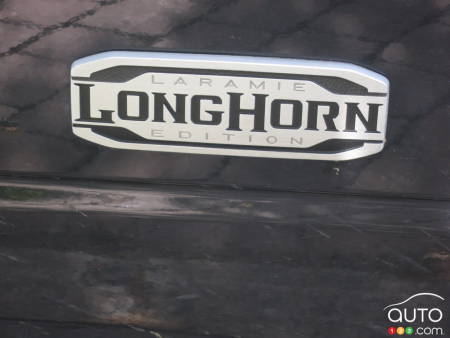 The interior is distinguished by a sophisticated design derived from that of the most recent Ram 1500s with a choice of premium materials. And since it's a 4-door Mega Cab, the cabin is almost apartment-sized.

The dashboard has a visually pleasing design and is also well-equipped with data instruments and accessories that should make long trips even more enjoyable. It's dominated by the (optional) 12-inch screen that serves several functions including rearview camera image projection and navigation system map. Of course, there’s Apple CarPlay and Android Auto compatibility. 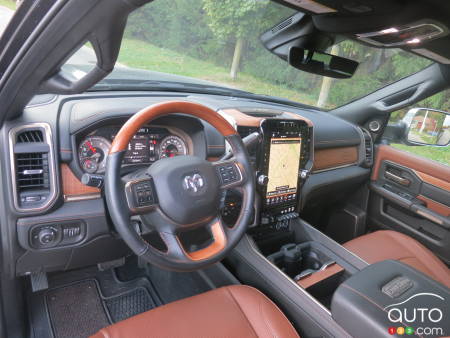 CLIMB aboard
But to see it all up close, you have to get in – and that means climbing up. The threshold of a Ram 2500 four-wheel drive is very high. It's a good thing that the options list includes retractable running boards that make it easier to actually enter your vehicle without climbing ropes.

Once behind the wheel, the first thing you notice is the comfort of the leather-trimmed front seats, and all around are useful accessories for work, including five USB and three 115-volt outlets that can provide up to 400 watts of power for using and recharging certain tools. The steering wheel is adjustable, but not telescopic. However, the foot pedal is adjustable, as are the seats. 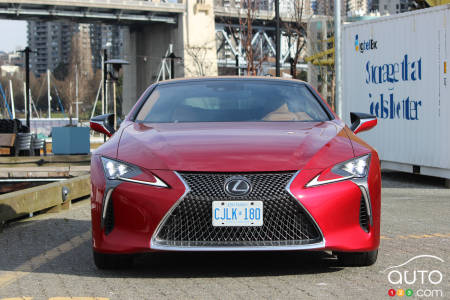 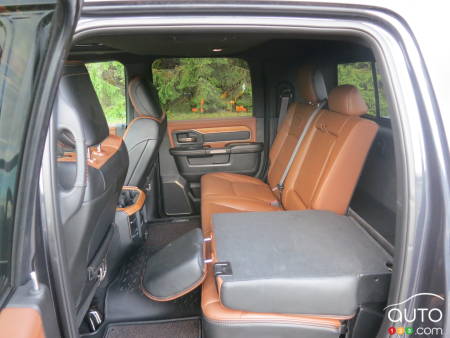 As for the rear seats, they're very generous for three passengers. Of course, visibility is exceptional as you would expect from this configuration. And, those rear seats can be folded down if you want to lug around big objects more securely than in the bed out back.

As for that bed, it has a load capacity of 4,050 lb, but access is not easy. If there's quibble I have with this FCA product, it's that there's no help provided for climbing up to get in the bed: no steps, retractable or otherwise. It would have been so easy to fashion a step in each corner of the bumper…

Solid mechanics
While the base engine of the 2500 Heavy Duty is a 6.4L gas-powered V8, no doubt the 6.7L Cummins 6-cylinder turbo diesel will be the big draw for potential buyers. And that was the engine sitting under the hood of our test vehicle. 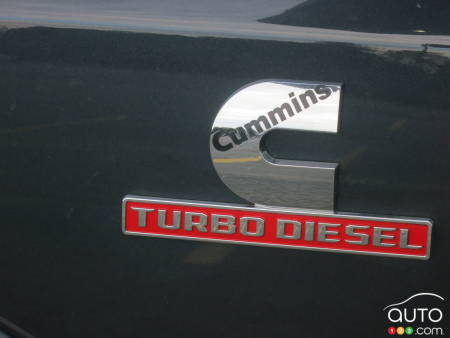 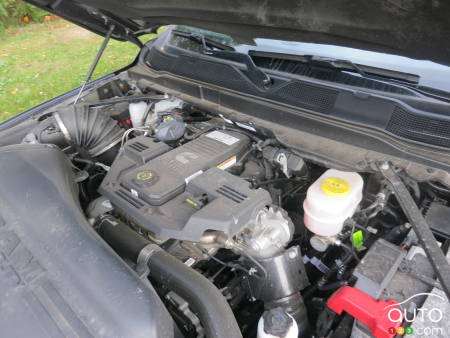 The Cummins unit, completely revised for the new 2019 Ram model, produces 370 hp and 810 lb-ft of torque (in the 3500 version, you'll find the same engine, but with more than 1,000 lb-ft of torque!). It's combined with a rugged 6-speed automatic transmission (with steering column-mounted shifter) and a dashboard-mounted power transfer case.

The Ram 2500 Heavy Duty's suspension has also been redesigned with coil springs in the rear (pneumatic elements are also available), all with the goal of making the large pickup more comfortable. Braking has been adjusted to the truck's capabilities, but with the diesel engine, the Ram is equipped with an engine brake (Jacob) that supports the driver heading down a slope with a heavy load and helps prevent overheating of the brakes.

The large tires on our test vehicle were Firestone Transforce ATs. On the road
The Ram 2500 Heavy Duty Longhorn is not for everyone. It is, first and foremost, a working tool. In the case of the Longhorn, you get added comfort and luxury, quite a bit of it on fact. But it's not a car or even a big SUV. Its diesel engine is noisy at launch (you have to wait about ten seconds before the starter activates, leaving the glow plugs to do their job). It's also noisy at low RPM (which will please fans of Cummins engines, a legend in the field) but once it's at cruising speed, it's more discreet even if it remains audible.

The Ram 2500 Heavy Duty is heavy - very heavy - and you can feel it on the road. Nevertheless, its accelerations are respectable and highway passing is stress-free. Incidentally, our test Ram was equipped with the Safety Package, which includes adaptive cruise control, frontal collision warning and braking assistance as well as blind spot detectors. Highway driving is enjoyable thanks to the great visibility all around. The steering is a little soft, but respectable for such a big pickup truck. Braking is also reassuringly powerful. But despite FCA's best efforts, despite promises of a smoother ride, this Ram 2500 is still a rugged pickup truck with a relatively dry and firm suspension, and it doesn't offer the comfort of a large SUV.

Meanwhile, in urban situations, its bulk can become a handicap, especially when it comes time to park it - although the large mirrors and camera systems do help. On a quick off-road trip, we found that the big Ram to be very agile in muddy terrain thanks to those big Firestone tires and its high ground clearance. However, you’d be wrong if you consider the big Ram an all-terrain vehicle (if that's what you're looking for, Ram now offers a Power Wagon version of the 2500 HD but only with the gasoline-powered V8). Incidentally, my week behind the wheel of this friendly giant resulted in average diesel fuel consumption of 15.84L/100 km (while the onboard computer indicated 14.0L).

Add transportation and preparation costs of $1,695 and a few other small charges, and the final bill comes to… $98,660 (before taxes, of course).

As we said, this Ram isn't for everyone. It is for a specific clientele of workers and outdoor enthusiasts with the means to acquire it. But when you see its beauty (and especially when you hear the sound of the Cummins engine), you can't help but dream about it. Who knows, maybe one day... Sam Elliott says it's so it must be true: the Ram Longhorn 2500 Heavy Duty is tough, and it's an impressive creature, for a variety of reasons. Here are 22 o...

FCA has announced details of the Laramie Longhorn editions of its 2019 RAM 2500 HD and 3500 HD trucks – by no coincidence at all, right as GMC was unveiling ...

FCA starts off the coming automotive season with two editions of the RAM: the one that carries on from last year’s model, now re-baptised the Classic, and th...