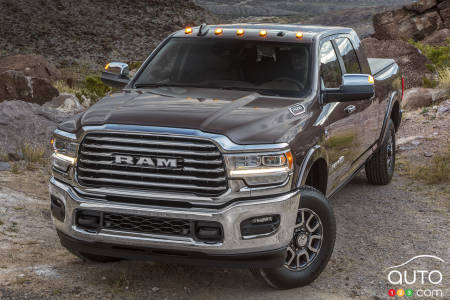 1.    The enormous hood confirms just how aptly the Ram name fits the favourite truck brand of Sam Elliott. This big beast sweats confidence and swagger. No existential self-questioning allowed. The Longhorn version might be decked in velvet, you’re still at the wheel of a tank. Now go find a wall to smash through.

2.    The Longhorn’s Mega Cab is so spacious that the entire Von Trapp family could have used it to record their mountain ditties in.

3.    Once the on-board computer has memorized the power-adjustable height of the pedal, you won’t tire of caressing the magnificent steering wheel decked in leather and genuine wood. Eventually you tell yourself maybe you should start the thing up…

4.    The growls and roars of the 6.7L inline-6 Cummins Turbo Diesel engine are life-affirming, nothing less. Its chants are distinct from those of a Ferrari, of course, but they’re equally seductive in their own way. One can imagine Hades, CEO of the Underworld, letting loose these kinds of menacing screams from the depths of hell to voice his displeasure at the grand finale of Game of Thrones.

5.    You can plan the next Easter Egg hunt for your little cowboys and cowgirls in the cabin of the Longhorn for all the nooks, crannies and storage spaces there are throughout, like the double glovebox, secret compartments under the rear bench and of course the central console, the bottom section of which is so abyssal that you might need Cousteau’s bathyscaphe to explore it all.

6.    As the surface area of this central console/elbow rest is roughly the size of a Prairies wheat field, there’s apparently talk that the next summit of the two Koreas could take place there.

7.    So much cowhide was used in the making of the decorative elements spread around the cabin that no vegetarian could take place inside without feeling a deep sense of shame. Carnivores, meanwhile, might find themselves irresistibly craving a visit to the nearest steakhouse for an early-bird special.

8.    The backs of the front-row seats (which are heated and ventilated, of course) feature storage pockets. So what, you might say, lots of models have that. Except that in those lots you usually get a narrow pocket into which you can slip anything as long as it's flat, plus maybe a bottle of wine you’re bringing to the friend who’s going to feed you (you hope), but definitely not the grain-fed chicken you’re bringing along to cook in case said friend hasn’t planned anything. Now, the Longhorn’s two pockets aren’t really that much bigger than others, but they distinguish themselves by the belt on the flap, so nice you’d be happy to slip that on before going down to the Stampede with Sam Elliott.

9.    A friendly suggestion to the watch designers in the employ of Breguet, Jaeger-LeCoultre, Blancpain and all the other anti-Timex outfits of this world who devote themselves to finding ever-more-seductive looks for their wares: check out the analog dials on the configurable screen located behing the steering wheel of the Longhorn. The ones framed by a finely detailed crown. The small dial displaying the fuel-tank level is fitted within the bigger dial that displays speed, and the elegant whole is bathed in oh-so-chic bronze tints. I’d be willing to bet a wristwatch that steals/is inspired by this design would sell like hotcakes at Ram accessories boutiques.

10.    These days, no self-respecting vehicle would dream of going without a big central screen on which it’s possible to do 1,001 things with your fingers. With its optional 12-inch screen, the Longhorn is almost as generous in this regard as a tech-y, hipsterish Tesla – in other words, the screen is humongous. But the Ram has the edge in that the icons of the Uconnect system on its screen are as easy to grasp as the lyrics of a country song.

11.    It’s true, the Mega Cab with its 76-inch bed is 18 short of matching the 8-ft (2.4 metre) bed that fits with the Single and crew cab versions, but 1.9 metres (6ft 4 in) is largely sufficient for loading all sorts of things you want to lug down to your local recycling centre. What’s more, its Line-X coat means you can do the caber toss with your spent 2x4s without risking damage to your Longhorn.

12.    The multi-link suspension does its valiant best to give you a comfortable ride, and in that it actually outdoes the Ford and GM offerings. You do have to wonder though about the wisdom of checking the option for the Auto-Level load-leveling rear air suspension; some users with the feature have already reported that the system struggles when the cloak of winter descends on Canada.

13.    Given the width of the truck (up to 1,925 mm in the back), you’ll need points of reference when it comes to threading the needle through tight spots. Enter the two gigantic optional trailer tow mirrors. Re those mirrors, the convex parts of those massive Dumbo’s ears can be adjusted independently from the rest, for an optimal view of what you don’t want to hit. As long as they fit through the local toll booth, you’re all set!

14.    To help with parking manoeuvres, the 360-degree panoramic camera and the ParkView backup camera are more than useful, they’re essential! But even with those features, you might want to whisper a few Hail Marys before trying to park the Longhorn in downtown Montreal, Toronto or Vancouver.

15.    No need to fear the ditches that border country roads with the Firestone LT285/60R20 all-terrain tires, which on their own stand higher than just about any ditch.

16.    On the heavy doors and on the imposing dashboard are stretched a leather the texture and clear hue of which would be worthy of Billy the Kid’s saddle.

17.    The available harmon/kardon audio system comes with no fewer than 17 speakers, including an 8-inch subwoofer. Wait ‘til you hear Sam Elliott’s voice resonate on that!

18.    Rolls Royces are famed for, among other things, the Lady of Ecstasy statue that adorns their mythic Greek-temple-themed front grilles. I propose an online petition to compel Ram to give the 2500 Longhorn its own distinctive figurine. Suggestions: A cowboy swinging a lasso rope, a cowboy on horseback, a cowboy in discussion with his banker on how to obtain financing for a Longhorn…

19.    I can’t stress it enough, the retractable footboards are absolutely essential to climb aboard, unless you come equipped with crampons, safety rope and a climbing pick.

20.    A day at a Six Flags park is so expensive. But no need to spend your hard-earned cash on that! Simply get in your Longhorn (using the footboard or crampons and pick, as preferred), after making sure the bed is empty. Then look for a railway crossing. Then ask your other half to grab something from the back, something that will make them have to undo their seatbelt. Your timing has to be just right. As he or she stretches out their arm, gun it over the rails! And watch as your passenger hits the ceiling. Guaranteed fun for the whole family!

21.    $100 to fill up at the gas station? Absolutely! Get used to it. On the other hand, an average fuel consumption of around 12L/100 km and a range-on-a-tank of over 900 km are not bad at all for a leather-clad brontosaurus on wheels.

22.    We all know that the diesel engine has seen brighter days. But the ignominy of its fall from grace when Volkswagen dumped the format largely in the trash dissipates when you realize this engine and its 370 hp and 850 lb-ft of torque (as compared to the 107 hp of the Nissan Micra). Can tow up to 8,972 kg (19,780 lb). Which means it can pull an African elephant, the adult male of which species can weigh 7 tons. Bring along your hard-drinking brother-in-law with the bulbous red nose and you’re all set to become the Barnum & Bailey circus 2.0.

FCA has announced details of the Laramie Longhorn editions of its 2019 RAM 2500 HD and 3500 HD trucks – by no coincidence at all, right as GMC was unveiling ...