At the turn of the current decade, the range of models carrying the Range Rover named consisted of three models: the LR2, the LR4 and the simply named Range Rover.

In 2012, the company announced it had hatched an ambitious expansion plan, one that would see the lineup grow to 16 models offered globally by 2020. This would consist of three families of models: Range Rover, Defender and Freelander.

The point here is not to harp on how far along the automaker is with that ambitious growth strategy. It’s simply to point out that the company said it was going to expand the lineup, and that’s what it’s done.

As of 2019, the North American contingent of models from Land Rover counts six members, including the Velar, a member in good standing of the Range Rover clan. The Velar was introduced last year, and it’s primary task remains to make room for itself in a segment many see as already saturated. 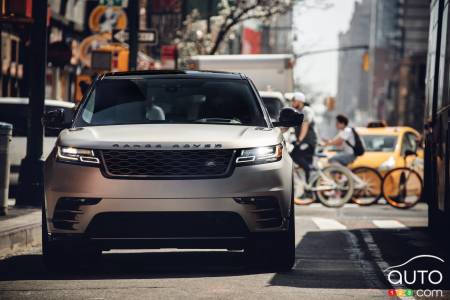 Is it properly equipped to succeed? Let’s say that it’s part of the way there, but that too many irritants remain for it to seriously challenge the category big shots.

It’s worth noting that two versions are available of the Velar: the base model, and the R-Dynamic variant, which is the one we drove.

Take a stroll around the Range Rover Velar, either literally or by perusing the specs sheet for it, and you find a number of positive elements you can hang your hopes on if you want to love this Land Rover.

The styling
The design is, by generally common accord, an eye-pleasing one – like the majority of Range Rover products for that matter. You have to be open to the idea of an SUV, of course, but if you are this one is pretty appealing visually. 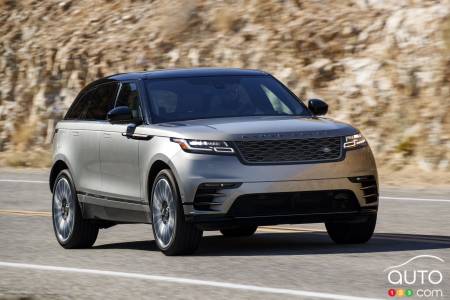 Give the devil his/her due, after all: Land Rover has been making SUVs since before they were even a twinkle in the eyes of other manufacturers.

Esthetically, then, the Velar is a solid entry, though to be honest it doesn’t really introduce anything radically new. Essentially it reproduces elements seen on other of the brand’s utility models. It’s pretty but not ground-breaking.

The interior
The presentation of the cabin is all a matter of good taste. The interior space is dominated by the Touch Pro Duo multimedia system, which features two-count-‘em-two 10-inch touchscreens. No need to be intimidated though, as the system is relatively intuitive and pleasant to use, once you take a little time to climb the learning curve. There is one hitch to it, however, and I’ll get to that.

For the rest, all is of high quality in terms of the materials, the construction and the finishing. Some of the surfaces, for instance the top parts of the doors and the dashboard, leave some doubt as to their long-term durability. We’ll know more about that in a few years. Also noteworthy are the panoply of options buyers can check off on their lists to upgrade the interior of the Velar even further.

As for tech and safety equipment, the Velar can be had fully loaded. But note I write ‘can be’. Again, I’ll get to that. 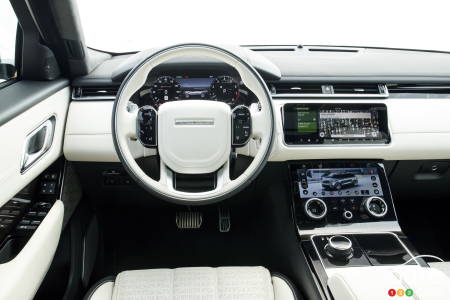 Mechanics and the drive
The Velar can be configured two ways. In essence, the R-Dynamic variant comes by default with a 2.0L 4-cylinder turbo engine, able to deliver 180 hp and 318 lb-ft of torque.

The version we drove, the R-Dynamic HSE, has the 3.0L V6 with displacement compressor. In its P380 configuration this unit generates up to 380 hp; it’s wedded to an 8-speed automatic transmission.

With this second powertrain, power is never lacking, to be sure. The HSE variant also comes with an air suspension that allows the driver to lift or lower the vehicle according to the surface being driven on. To that end, it’s also possible to toggle between drive modes that adjust parameters of the suspension elements and the responsiveness of the engine and transmission.

Overall, the experience at the wheel of the Velar is positive, though the comfort level is not as luxurious as you might hope. Nor is road grip anything to write home about. These are two elements to keep in mind, especially given what else is out there in the segment. 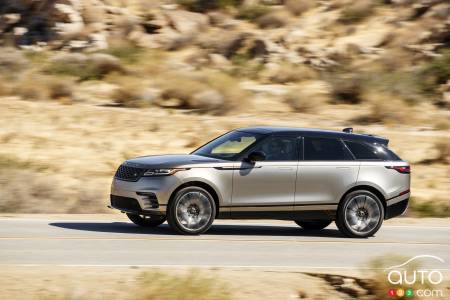 For potential buyers in this category, that “what else” includes the Porsche Cayenne, BMW X5 and Volvo XC90. These are pretty daunting adversaries, so you can see that for the Velar to be a “good” vehicle is not necessarily good enough.

The conclusion we come to is clear and inevitable: the Velar is not the best choice in its class.

Yes, the vehicle is several strong qualities, but they’re negated by the irritants, to the point where many shoppers will, with reason, cross the model off their shopping list. Let’s delve a bit on those irritants, shall we?

Options on a luxury vehicle
If you’re going to fork over $80,000 for a vehicle, you rightly expect to get a wide swath of features to come with it. What a turn off for a company to withhold a number of functionalities unless you pony up a few hundred here and there for things like heated seats and blind spot warning. For me, that’s a no-go.

Land Rover wants to exact an extra pound of flesh for a unique colour scheme or metallic accents on the exterior? Fine. But withholding elements that are commonly included standard in vehicles that go for $20,000? Nope, not for me. 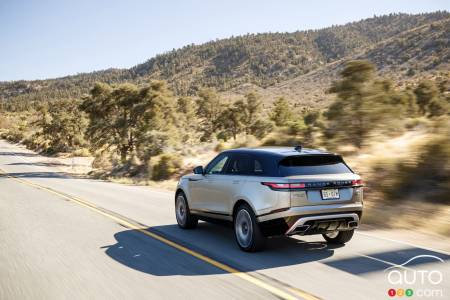 There’s another burr under my saddle here, one that allows me to take a swipe at Volvo at the same time (bonus points!).The screens of the central console contain the commands for things like the heated seats, the audio system and the climate control. You’ll look in vain for any physical buttons or knobs on the console to adjust any of these functions. Aside than the inconvenience (and possible danger from removing your eyes from the road), what happens when the inevitable breakdown of the system occurs at some point down the road? Forget then about accessing these functions. Fancy a drive in frigid weather without heat? Not me.

I’m not techno-phobe, understand. But there are valid safety and convenience issues here that I’m not alone in pointing out, and it behooves the manufacturers to resolve them.

Another doubt that installed itself in my mind during my week with the Velar, has to do with the long-term durability of the door handles. The Velar, clearly not designed primarily with our harsh winters in mind, has handles that retract electrically. When the cold weather, freezing rain and ice hit, these start to have problems opening out when they’re supposed to. You can guess how that particular story might end.

Lastly, I amused myself with a little bit of configuring of the R-Dynamic version of the Velar. From a starting price of $67,200, I ended up at a total cost, all options included, of $97,592. Some of those options, as I mentioned earlier, are understandable, but Land Rover asking me to pay an extra $300 to get Apple CarPlay and Android Auto compatibility is like a blind date that shows up with food stuck between their teeth. Uh, no. 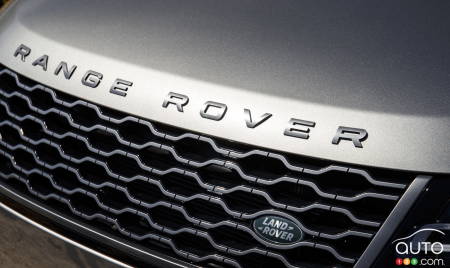 Conclusion
Land Rover is adding width to its product range in a bid to expand its market reach, and that’s perfectly understandable. But it opens itself up to criticism when it asks premium dollars (at base and in options) for a luxury product that falls short of exceptional. And while the Velar is a good product, it is not exceptional.

Especially when there are alternatives like the Porsche Cayenne and the Acura MDX out there. Those models, which sit at opposite ends of the price spectrum in the segment, are my first choices. 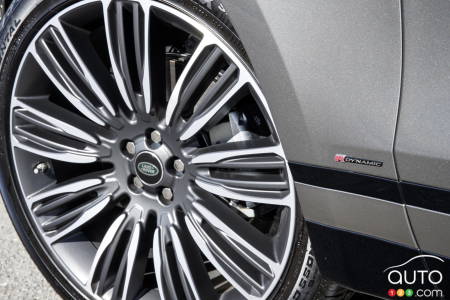 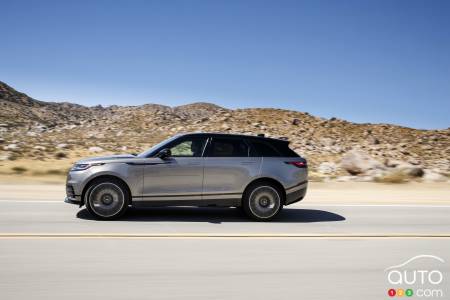 The Land Rover brand as well as the Jaguar I-PACE concept each took home major design awards at 2017 Car Design Awards in Turin. Here’s your chance to admire...