The war that is raging across the various niches of the industry is a little like the battle teams of the National Hockey League are in to make the playoffs. It takes a balanced alignment to be successful.

The lack of a good goaltender or dominant center player can be very costly to a team. The same goes for an automaker that’s missing a player in a particular segment; it’s gifting an advantage to its competitors.

Which brings us to Subaru. Its position as a small player in the industry means they don’t compete in all categories and the goal, of course, is to fill the gaps. This is where the Ascent comes in. The SUV was released last year and will allow the Japanese automaker to offer a product to Subaru loyalists who have owned an Outback or a Forester, but now need more space.

In years prior, these people had to go to Honda (Pilot), Toyota (Highlander) or Mazda (CX-9), for example. Today, they can stay in the Subaru family.

Specifications of the 2019 Subaru Ascent 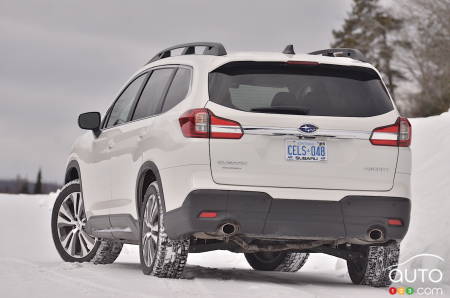 A Tribeca 2.0?
The Japanese company actually tried to break into the larger SUV segment once before. Does the name Tribeca ring any bells? That SUV was marketed between 2005 and 2013, but never took hold and was withdrawn in January 2014. The unconventional front fascia of the first two generations of that SUV was not a hit and the product never recovered form that design misstep.

What’s more, the cost of the Tribeca was just too hefty for what buyers got in return. Even Subaru has admitted its errors with this product.

With the Ascent, the company avoids its past mistakes. First of all, the product has a much more traditional look. Though it certainly isn’t ugly, it doesn’t offer anything exceptional either. The goal is clear: please the masses.

Where the SUV is most appealing for the buyer is in terms of price. Now let’s be clear, Subaru ain’t giving its Ascent away, but nor did it skimp on the standard equipment included. 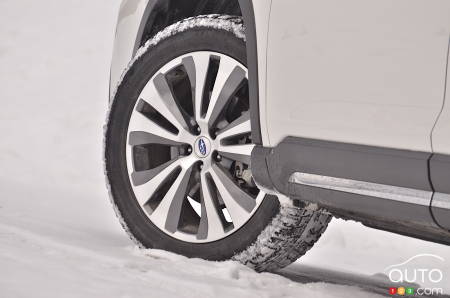 The product offering
The entry into the model is the base Convenience version, offered at $35,995. Then come the Touring and Limited models, priced respectively at $40,995 and $46,495. In both cases, add $500 and you'll enjoy second-row captain seats. The Premier model tops the line at $49,995.

Starting from the base model, the buyer gets heated seats, Apple CarPlay and Android Auto applications, EyeSight safety technology and the X-mode all-wheel drive function which is the ultimate go-anywhere pass.

The Touring version adds a panoramic sunroof, power liftgate, 8-inch screen (6.5-inch for entry-level multimedia system) and some additional safety features such as automatic reverse braking when an obstacle is detected.

With the Limited variant, you get a heated steering wheel, a richer interior with improved dials, navigation and leather upholstery among other upgrades.

In short, you get the idea. The details are many and the best way to get the full picture is to visit the manufacturer’s website. 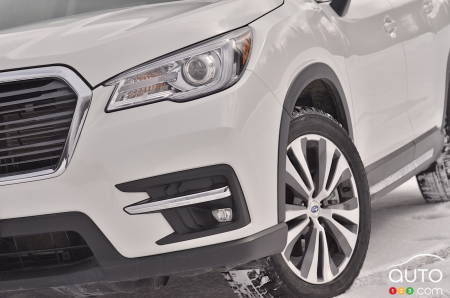 Comfort above all
Our tester for the week was a Limited version. Like the other trims, its goal is simple: provide maximum comfort and peace of mind. I appreciated the driving position and the numerous possible adjustments to the seat. The ergonomics are good overall, but some controls located to the left of the dashboard are difficult to access and could easily be overlooked.

In the second row, space is fantastic. Even better, the seats are mounted on rails which allows you to slide them forward for easy access to the third row. While comfortable, the third row lacks head room and is best suited for young children. It’s worth noting that the size of the third-row windows gives the driver excellent visibility.

In terms of cargo space, the Ascent is very generous at 2,094 litres. 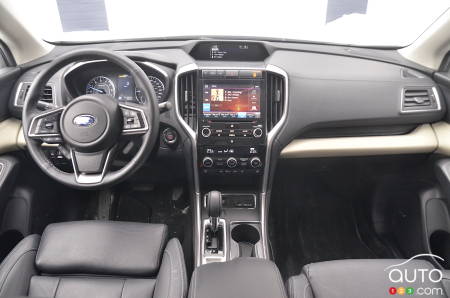 A single engine option
Only one engine is available in the Ascent: a turbocharged 2.4L 4-cylinder making 260 hp and 277 lb-ft of torque. The only transmission offered is a continuously variable (CVT) automatic unit.

To be honest, this isn’t a powertrain that will raise your pulse rate or even lift a few hairs on your arm. The engine does an honest job and it manages to propel the Ascent with poise. It’s a little more laborious in acceleration and we won’t try to guess what it’s like when hauling something substantial. An optional V6 engine would have been an interesting option here. Still, it’s possible with this configuration to tow up to 5,000 pounds.

It’s all find and good that the turbo can do the job, but I maintain that there’s no substitute for natural power - especially in terms of long-term reliability. This is something to look out for with this new product. The announced fuel consumption is about 11.6L/100 km in the city, 9.0L/100 km on the highway; our average worked out to 9.8L. 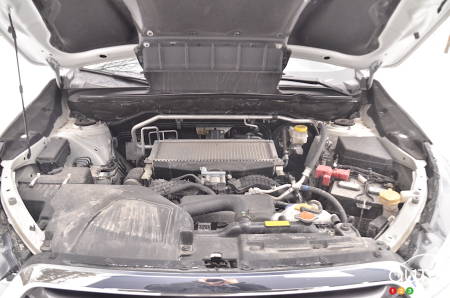 Behind the wheel
Subaru was rational in designing the Ascent, and the result is that the SUV does everything competently. But if emotion is what you seek, you’ll be disappointed. If effectiveness matters more to you, you’ll like it.

As for the drive itself, the Ascent is very neutral and very unengaging. I did particularly appreciate the lightness of the steering, which made it feel like you’re piloting anything but a three-row behemoth.

In curves, the laws of physics are evident. The Ascent is heavy and the chassis could do a better job of handling body roll. In typical daily driving situations the ride is perfectly fine.

All in all, we have here an SUV that does what it has to do, no more no less.

As a bonus, of course, you get the Subaru all-wheel drive system, and you could consider this a prime asset of the Ascent. 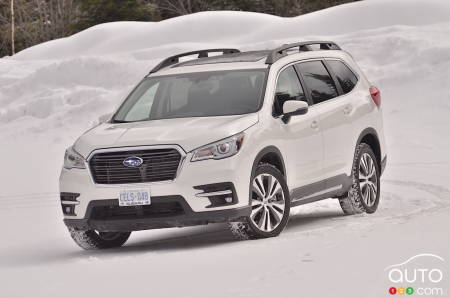 Conclusion
With this new entry, Subaru hopes to claim its share of the pie in the three-row SUV segment. While the product has all the necessary tools to do the job, it lacks that little “je ne sais quoi” that could make it a rising star in the segment.

It’ll be up to Subaru to get the word out to Outback and Forester owners that the Ascent is here and is a viable option, otherwise it might be a long road ahead.

Photo gallery of the 2019 Subaru Ascent

How to choose between the 2019 Mitsubishi Eclipse Cross and the 2019 Subaru Crosstrek? Auto123 compares two small SUVs that stand apart from the rest in thei...