A few months back German auto giant Volkswagen rolled out the seventh generation of its Jetta compact sedan, and promised there would be a new GLI version to come. After some impatient waiting on the part of VW lovers, that promise has now been kept. But is it the sporty Jetta we’d hoped for?

The new Jetta, before we get into the GLI iteration, is built around the company’s new MQB platform that has generally been given thumbs up by automotive journalists. Which led many to expect big things from a spiffed-up GLI version.

What identity?
And yet, there’s something missing with this new Jetta GLI. And that something is a distinctive identity. The GTI, that sporty iteration of the Golf, is a head-turning kind of car when spotted on the road, but it’s difficult to say that about this GLI. The new edition, by the way, can be had with the optional 35 letter designation, since this year marks the 35th anniversary of production. 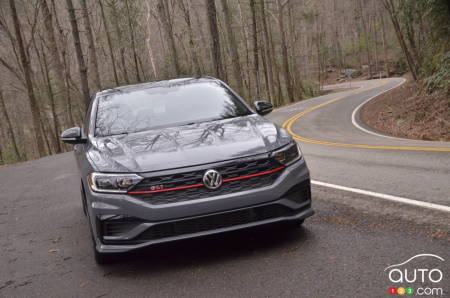 I’m not sure how this nondescript appearance came about, exactly, because Volkswagen did put some effort in reworking the exterior finishing of the model to distinguish it from the regular Jetta… to the point where that nameplate doesn’t even appear on the outer shell of the car! Anyways, the front grill is black with red accents. In fact the GLI gets a host of exclusive red elements. And of course, the GLI 35 gets its own unique alloy wheels. But still, meh. And that might be due in part to our tester being an all-grey affair, making it a tad anonymous.

Inside
Even the interior of the new GLI is less spectacular than we might have hoped. Or more accurately, it’s just not wow-inducing, even though it is well-designed and laid-out. Case in point is the dashboard, which hints not at all of the GLI’s supposed sportiness, but manages to be an esthetic and functional success and wonderfully simple to use - as you would expect from a VW.

The instrument cluster, comprehensive and yet easy to read, is well-placed in front of the driver. Most commands are well within reach, and a few of them are on the steering wheel itself. The latter is taken from the GTI and comes leather-wrapped with contrasting red stitching, and it features a flat bottom. Very nice. A big screen dominates the central dashboard, on which you access the audio system, nav, backup camera, etc. Note that the volume button is really close to the touchscreen, so that occasionally when turning it you accidentally change the infotainment mode. 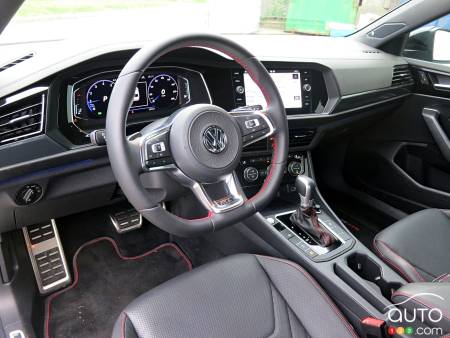 Under the big screen are the climate control buttons; below that, the console with its set of commences, including the drive mode (which affects, among other things, the firmness of the suspension). Note that after testing out each mode in different settings, including Sport, we spent the majority of our time in Normal mode as it was easily the most comfortable to ride in.

As the car we were driving was equipped with VW’s dual-clutch 7-speed automatic transmission, the centre console also featured the gear shifter (there are also paddle shifters on the steering wheel). Also on the console is the push button for starting/stopping the engine.

One thing that might rub fans of nice German cars the wrong way is the finishing, much of which is of hard plastic that’s not particularly seductive to the touch. The seats are better, and though they’re a bit firm they prove comfortable on longer drives, plus they also get contrasting red stitching. What they don’t get is the pronounced lateral support you find on the GTI, which is bad in the sense that you get less support in sharp curves, but good because it’s easier to slide into and get out of the GLI! 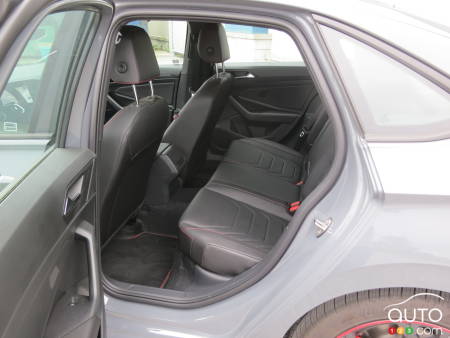 The rear passenger space appears roomier than what you find in the Golf GTI, and as long as the front occupants don’t push their seats back too far legroom is pretty good. As well, when the back seats are folded down you have substantially more cargo space in back than the GTI.

The powertrain
The familiar 2.0L 4-cylinder turbo engine of the GTI is here, delivering 228 hp and 258 lb-ft of torque. While it can be combined with a 6-speed manual gearbox, our tester had the aforementioned 7-speed dual-clutch transmission. This unit works like a true automatic, and as part of the GLI’s powertrain it works flawlessly, exhibiting no hitches and transitioning as smoothly as any automatic out there. When solicited manually, it also responded instantly and precisely.

The GLI comes with front-wheel drive and it appears Volkswagen is in no hurry to give it its 4Motion AWD system. The car we drove rode on Hankook Kinergy GT 225/45R18 tires mounted on wheels with large discs (13,4 inches in front) and red-coloured calipers. Steering is assisted by a variable-gear electric motor, while the adjustable electronic suspension is multi-link in the rear in lieu of the current Jetta’s more-common torsion bars. 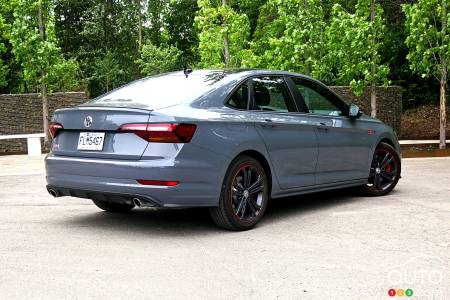 On the road
So then, why the unfavourable comparisons with the GTI? Simply because, esthetic touches aside, this sedan doesn’t drive like a sports car. It has all the elements needed to get there but its configuration forces us to file it in the sporty-looking sedan category than in the true performance class.

The GLI  is able to sprint from 0-100 km/h in under seven seconds, if you manipulate the paddle shifters judiciously. Road grip is notably better than that of the regular Jetta’s, but if you’re going to compare it to the GTI you need to take into account its weight and dimensions.

For the most part, I think owners will settle on Normal mode as the default one, maybe switching to Eco I purely city driving and to Sport on a winding country road, say. In Sport you also get more of a racket out of the exhaust, so that might please performance fans – in Eco and Normal modes, generally the engine and its effluent are quiet as mice or almost. 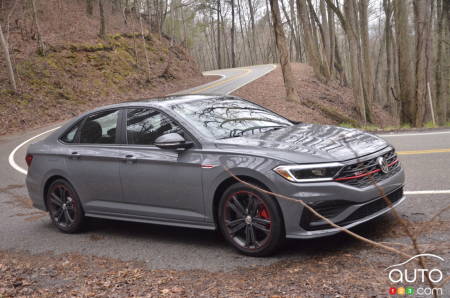 Consumption
Our week-long drive in the GLI was split between urban and open-highways environments. The VW GLI gave us a combined figure of 7.78L/100 km, while the on-board computer registered 7.5L. Incidentally, Volkswagen recommends the use of regular-octane gasoline.

While the sporty-looking GLI disappointed by not being more sporty-acting, and has little if anything to do with Volkswagen’s sprightly GTI, it more than impressed by its quiet and smooth ride; in fact you’d almost want to re-classify it as a grand touring sedan. 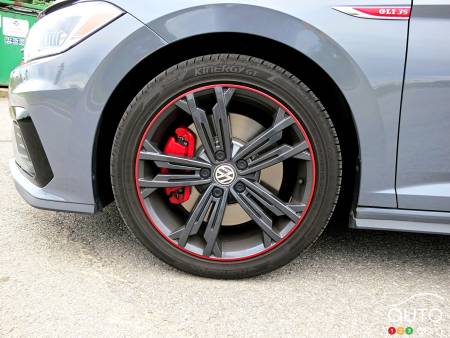 Auto123 went to Tennessee to discover in the flesh the 2019 GLI version of Volkswagen’s Jetta. While the model clearly offers more in terms of power and perf...

The 2020 Volkswagen Jetta GLI is either a fuel-efficient car (in terms of price and fuel consumption) with a sporty side, or a sports car that's practical an...