Auto123 puts the BMW M2 CS to the test, and it's the beginning of a beautiful love story.

Bowmanville, ON - In my line of work, I drive a lot of cars every year, and while a handful of them are very attractive because of their high performance - I'm talking about sports cars - very few of these sporty vehicles make me say “I want one”. But that's what happened with the BMW M2 CS.

On a day when we pitted the M3 and the M4 Competition in a little friendly head-to-head contest, a track test of this ultimate M2 was very appropriate. And because life sometimes does work out well, fate had it that the last car I’d be driving on this day would be the best. The supercharged little 2 Series was some tasty icing on the cake! 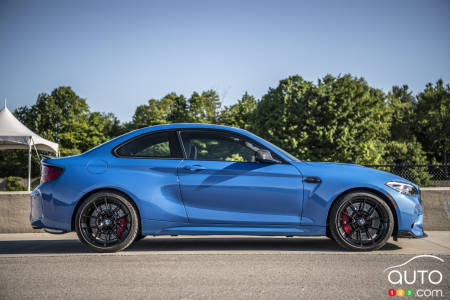 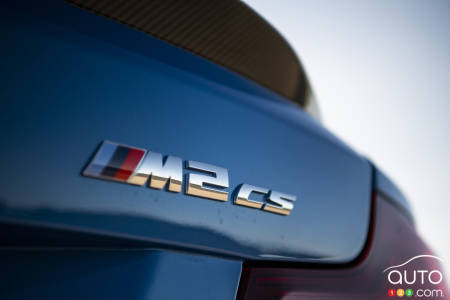 M2 Competition or M2 CS?
I have to specify that the model in question is an M2 CS (for Competition Sport), a more energetic variant than the M2 Competition. Because yes, the "regular" M2 is no longer offered in Canada, as if BMW Canada wanted to tell us how good the M240i is and that the gap between it and the old M2 was too small.

For a gearbox, our tester had a good old 6-speed manual, although take note the dual-clutch option remains in the brand's catalog for those who prefer their race car with one less pedal. Note also that this is the last M car that can be ordered with a dual-clutch transmission -  all others come with an 8-speed automatic. 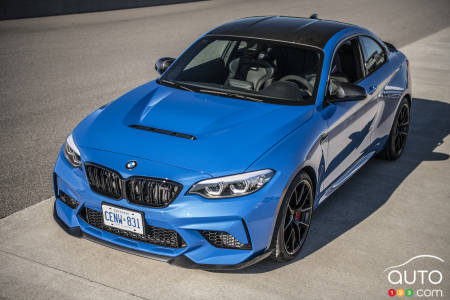 Another important feature is the adaptive M suspension, which allows for three levels of firmness (Comfort, Sport and Sport+) and can turn the driver into a superhero!

The disc brakes are also exclusive to this special variant. The front and rear discs are larger in diameter, while the calipers have six pistons in the front and four in the rear. And while this option was conspicuous by its absence on the test vehicle, know that it’s possible to switch to carbon-ceramic brakes, perfect for those days at the track.

Finally, there's the exterior that sets the M2 CS apart from its peers. The carbon-fibre hood also features an air vent to release heat from the engine compartment, but also to improve the car's aerodynamics. The roof, also carbon-fibre, helps stiffen the body, reduce weight and improve the soundproofing of the car.

At the edge of the trunk, a small “Gurney flap” spoiler improves aerodynamic support at high speeds, while the rear diffuser has a hard time hiding the four exhaust pipes. The colour of the M2 CS, a Misano Blue, is exclusive to this model produced in very limited quantities. 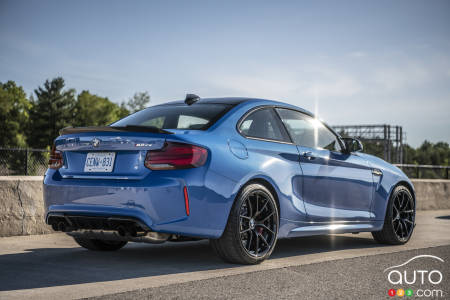 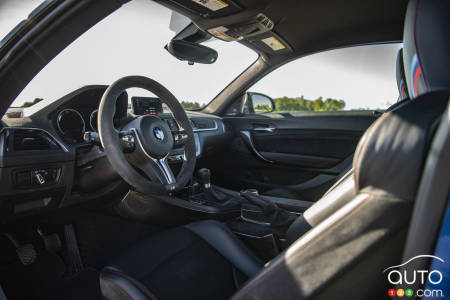 As for the interior, it's full of Alcantara suede, on the dashboard, the specific steering wheel and even the seats. In fact, these are the same as those used in the old M3/M4 CS, with a lot of support and even a natural ventilation at the back. A pure delight for the eyes... and the back!

On the track
The BMW M2 CS offers - as you may have guessed - an ideal driving position! With the numerous manual adjustments of the sport seat, the position of the pedals, the centre console with a good old gearshift knob and the superb steering wheel with a particularly fat curl, the driving pleasure starts even before you set off.

Of course, it's on the track where this engineering marvel is at its best. With all the adjustments placed in their sharpest modes, the coupe suddenly becomes much more surgical. The adaptive suspension is firm, but not unpleasant - really not - which suggests that on the road, the M2 CS will be as comfortable - or nearly so - as a regular 2 Series. The automaker has mastered this facet for a long time, and the brand's purest sports car is no exception.

You feel the additional power right away, as the DDT (Driver Development Track) allows for acceleration worthy of a car with close to 450 hp. The braking is magical, even though at the beginning, I braked too early when approaching the corners. The steering is also uncommonly precise, the M2 CS skidding a bit on corner exits, without putting the driver in trouble though. 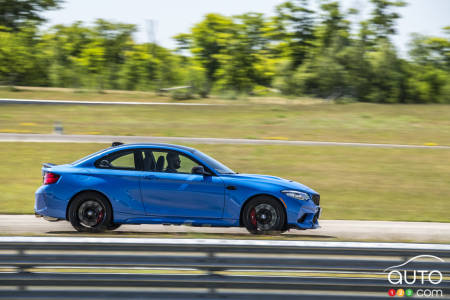 Photo: BMW
The BMW M2 CS, on the track

This M2 CS is, in my humble opinion, the car that comes closest to the original M3, the generation known as the E30, still considered the gold standard of sublime performance from a coupe. The heel-toe shifting is very easy, the gears are also easy to shift, and the lever is a pleasure to handle, so much so that I downshifted a few times just to relive that brief adrenaline-filled moment!

The last word
The BMW M2 CS I tested belongs to the 2020 model year, but that’s of no importance - the 2021 model is identical to this one from last year.

No denying it, the asking price is very high. Spending $99,595 before fees and taxes on a car whose only real function is gluing a big smile on the driver's face is not for everyone. But for those who can afford such a toy, the BMW M2 CS is not only a great track car, it is, in my humble opinion, an excellent investment. If the prices of M cars available on the used car market are any indication, buying one of the rarer versions produced by BMW’s performance division is a very good idea. 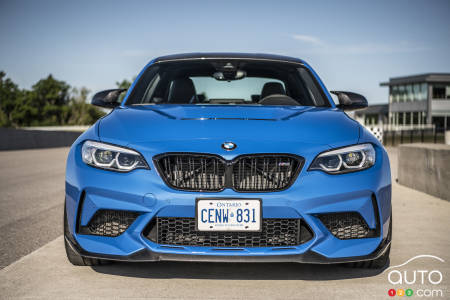 Future collector's car
An ace on the track
Fun to drive 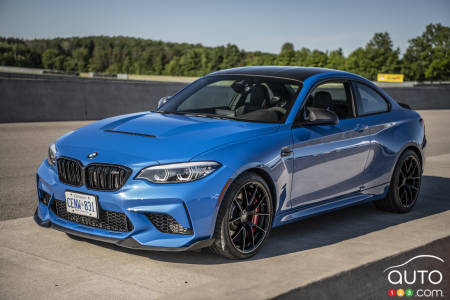