For 2020, the line separating the BMW M550i and M5 super sedans – and yes, they are both super sedans, make no mistake – has gotten blurrier still, thanks to the M550i being given a dollop of added power, to the tune of 68 extra hp and 73 more lb-ft of torque. Since the M5 hasn’t received any power boost for 2020, the M550i thus draws even closer to its “true M” sibling.

In reality, though, those power figures are only part of the story, as the M5 still has all the craziness in its corner, like the ability for drivers to lock it in RWD, map a number of drive settings to two memory buttons and actually have it feel like it could very well belong on the race track.

The M550i remains a little softer (though my tester did still run an adaptive suspension set-up that you could also tune yourself) and a little less in-yer-face-looking than the M5, although the M Sport brakes with their blue M-logo’d calipers do draw the eye. 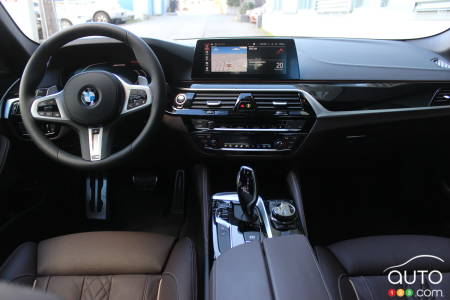 Inside, meanwhile, the ceramic controls included in my tester’s Premium Package draw the eye even more than do those brakes, as does the sumptuous brown interior with cream-coloured piping on the seats. For their part, the seats are supportive but less highly bolstered than the M5’s, and more comfortable as a result. The glassy look, meanwhile, appears on the shift lever, iDrive control wheel and on the temperature and volume dials, making the whole shebang sit that much closer to what you might see from BMW’s upmarket Rolls-Royce brand.

While I’m a fan of modern-looking interiors with carbon fibre inserts and brushed aluminum bits as much as the next person, the little touch of class from the glass elements is welcome here. Plus, it serves to further differentiate the M550i from the M5.

Beyond that, the M550i’s interior is all modern BMW, and that’s a good thing. 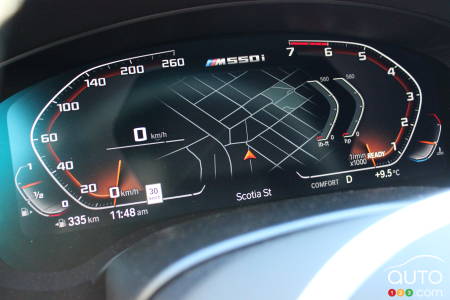 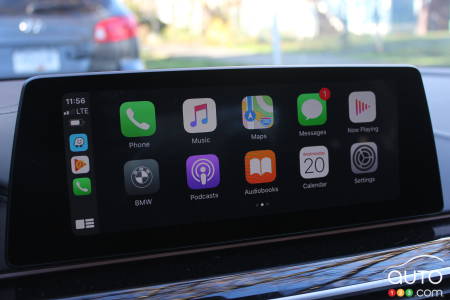 It starts with the dual screens: your iDrive infotainment display on the right, and your gauge cluster on the left. The gauge cluster is modifiable to any number of alignments, from your typical dual-gauge display to having your navi map span across the whole length. Personally, I prefer to keep the navi map small, as the way BMW’s system tracks your progress – by having the roads displayed on the map progressively light up then fade as you pass through them – is clear enough. More means more distracting.

My tester had the latest-generation iDrive 7.0, so the main display is a tiled affair that lets you move the alignment of the tiles around and change what’s displayed on it. Available widgets run the gamut from news apps to vehicle information and your audio display. Unless, of course, you’re making use of Apple CarPlay (Android Auto is not supported), in which case that menu takes up the entire main display. A quick note: It feels a little strange to operate CarPlay via the iDrive wheel to be sure but never fear; unlike Mercedes’, you can operate this system via touch.

Though it works via Bluetooth, a wireless charging pad spares you unsightly cables sprouting from you dash no matter what. There are USB ports too, though they’re mostly of the USB-C variety so keep that in mind. However; while connecting wirelessly is nice, CarPlay – in my experience in a number of cars – is not an exact science and can require a re-boot from time to time, which usually involves unplugging and re-plugging your cable.

Obviously, that’s not something that can be done here so a reboot does take more time as you have to actually ask the car to forget your device, and your device to forget the car. Of course, while most every car has CarPlay these days, the tech is still in its relative infancy so I expect most of the apps to have ironed out all these foibles sometime soon at which point all this rebooting will become moot.

Enough about that, though. After all, if all you were really concerned with when it comes to your mid-size luxury sedan was its interior tech, then a 540i would be just fine. Chances are, you’re buying the M550i because you want to be able to let your hair down (along with your right foot) from time to time. So let’s do that. 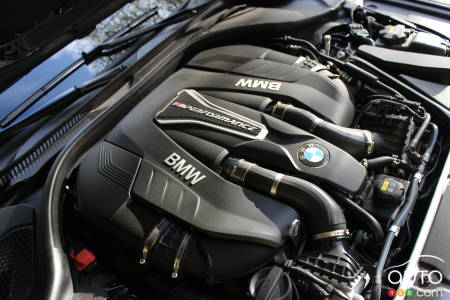 When it comes to the M550i’s engine the power figures are important to consider for sure, but that’s only part of the story. The way that power is deployed is another.

The M550i’s twin-turbo V8 gets what’s called the “hot vee” treatment, meaning the turbos are nestled between the two cylinder banks. That means the exhaust required to fire those turbos doesn’t have to travel so far, meaning they spool up quicker and deploy their power more readily and smoothly.

On the road
So, with turbo lag all but banished from the proceedings, the M550i positively explodes off the line on throttle tip-in, helped along by its clever xDrive AWD system that can shuffle power around to give you the best grip on launch, then the best balance as you start to delve deeper into your drive. Really, it’s hard to believe that there’s actually a more powerful 5 (well, two more powerful 5s if you include the M5 Competition) than this as there’s more power here than any luxury sedan should ever need. Of course, I’m not saying that I don’t want manufacturers to stop developing fast sedans, but you know…

The car does it all with such panache, too. The engine note is present but by no means overbearing, as is the exhaust note through the quad exhaust. It’s authoritative but not exactly shouty, more barrel-chested than soprano. Indeed, the most discomfort I felt was during activation of the auto start/stop system, which is a little harsh and causes lots of shuddering upon start-up. This is especially notable in the Eco Pro mode, as the engine is that much keener to enter this state of ignition purgatory when in Eco Pro. 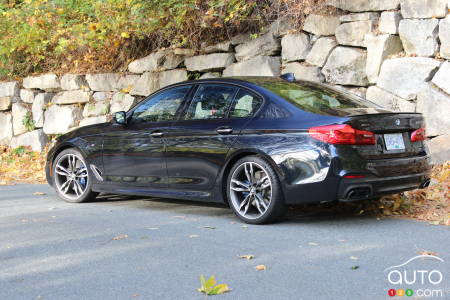 Which kind of makes sense, when you think about it. This is a darn fast car, this M550i, and so it should be impatient to get going again. Indeed, on the power front, it’s one of the best applications of the BMW M Performance moniker to date. And when in Sport or Sport Plus modes, that slog you feel in Eco Pro is replaced by positively bananas acceleration (with a little more noise, of course) that really made me want to enter into a drag race with an M5. Someday. Maybe.

The handling front is where you start to see a little bit of “standard” 5 Series trickle through; it’s not as if the M550i doesn’t feel better through the turns than the 540i, it’s just that a few BMW schisms – the feeling that there’s an air bubble between the wheel and front axle, for example, that robs the steering of some feel – do remain. You have to look pretty hard to find them, though. Indeed, if I were to put the knowledge I’ve gleaned from driving as many performance sedans as I have aside, there’s no denying that the M550i is, above all, a very good handler.

It's a handling package that’s punctuated by quick turn-in (again highlighted in any of the two Sport modes) and suitably predictable chassis that does a good job of helping you rotate through turns thanks to the clever power dispersal by the AWD system. It gets a little squishier as you edge closer and closer to 10/10ths, but even the most hardened car critic wouldn’t call the M550i “floaty” or “lazy” in the handling department.

The M550i is “comfortable” in the ride department, meanwhile. The seats look plush and they are, and backed up by great damper and bushing tuning that means if you want to forget all the performance associated with the “M” badge for a moment and just waft your way home after a long day at the office, you should have no problem doing so. 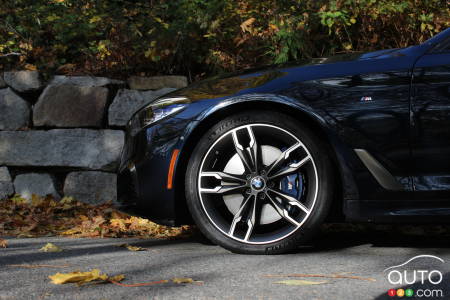 Performance-oriented it may be, but the M550i is a luxury sedan above all else and it nails that aspect of the experience, from the way the cupholders can (quite effectively) cool or warm your drink, to the way the seats can massage your lower back.

The best part is, you can get all this power and prestige for about 30 grand less than it takes to score the keys to a blue-blooded M5, and that’s a real boon for those seeking a little more performance from their luxury family sedan. Indeed, no M550i owner is likely to pull up beside an M5 and think “man, I should have gotten that one”.

Steering a little down on feel
No Android Auto support 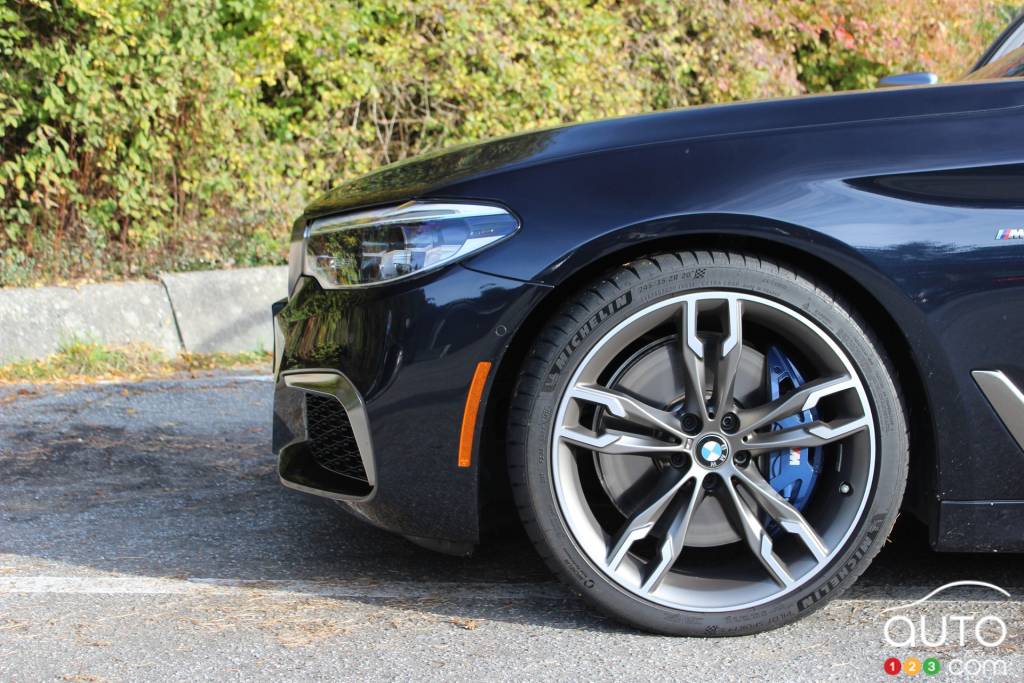 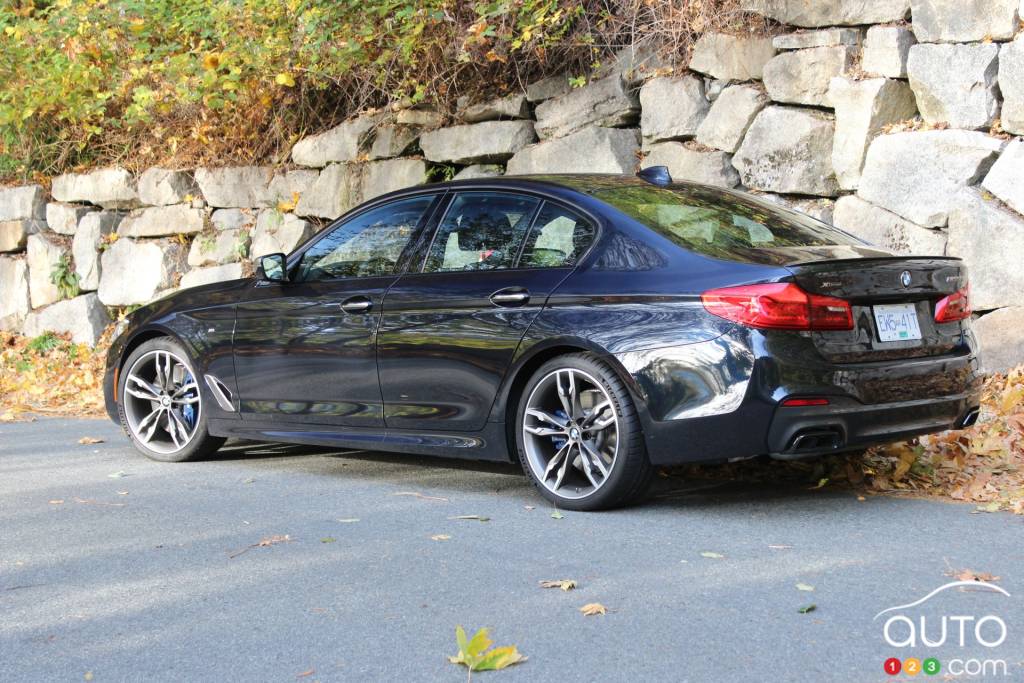 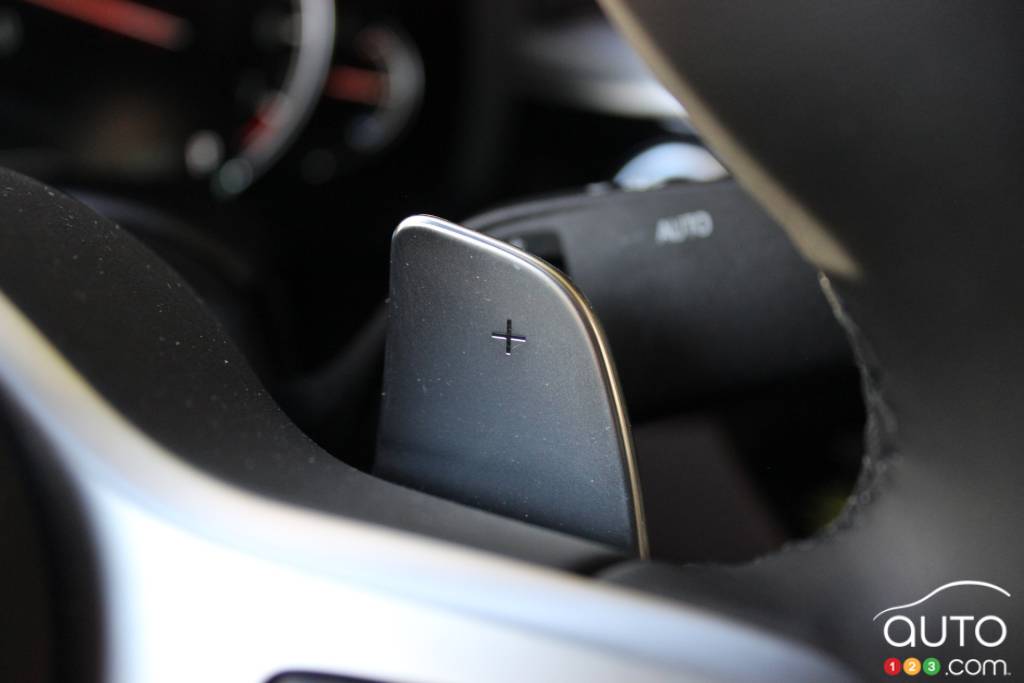 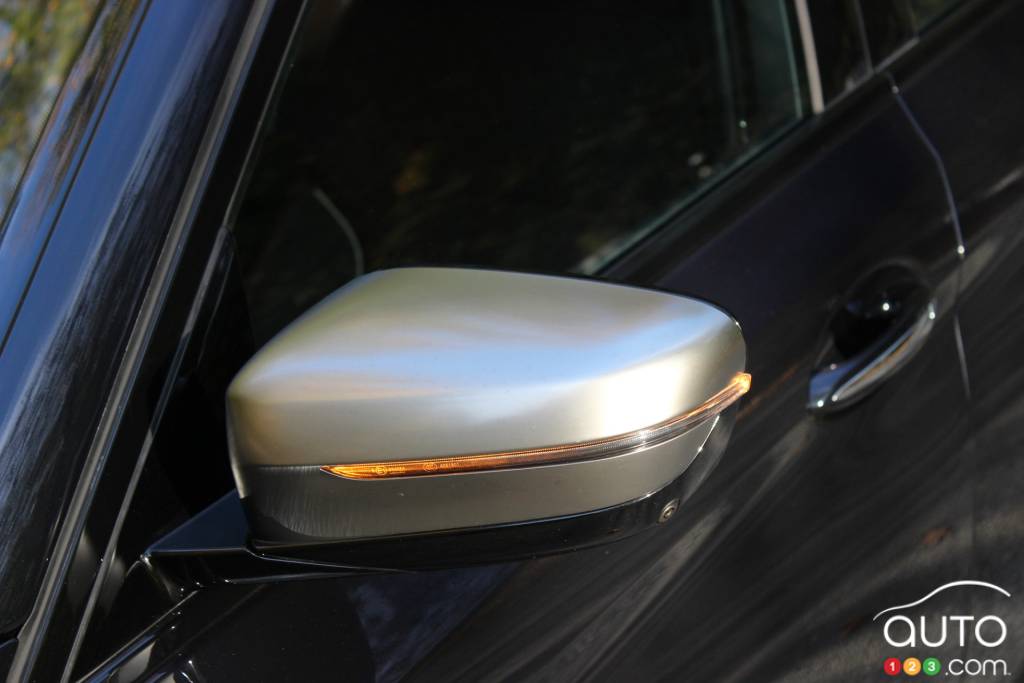