The Ford F-150 is certifiably legendary.

Of course, in the car and light-truck world, “legendary” status can be achieved in a number of ways. Maybe a car is famous in Hollywood – like another Ford, the Mustang. Maybe the car in question ushered in some revolutionary new tech, like some would say Tesla did with the Model S. Maybe it’s the most expensive car ever sold at auction – say, a 1962 Ferrari 250 GTO. Maybe it was the least expensive car ever sold in the showroom. That would be the Tata Nano.

In the case of the F-150 – or, indeed, the Ford F100 trucks that preceded it – legendary status has been achieved through volume first and foremost. The F-150 has been the bestselling passenger vehicle in Canada for over 52 years, and while Ram trucks have been taking a bite out of those sales lately, the F-150 soldiers on as the best-selling of the best-selling pickups.

It's also due to enter its 14th generation in 2021, so we’re testing the Platinum version seen here as a bit of a last hurrah for this generation of the F-150. 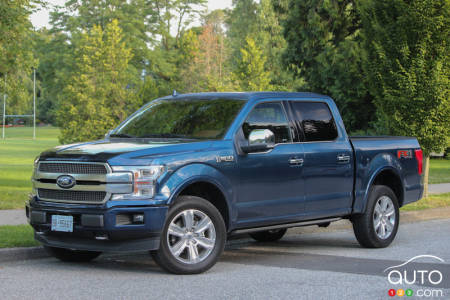 The Platinum version sits on the third rung of the F-150’s Canadian lineup, behind the Limited and Raptor trucks. Thing is, my tester was so optioned out that the only real difference between it and the Limited are the latter’s 22-inch wheels; many of the other features that version brings – twin-panel moonroof, B&O audio, 360-degree camera – were on my truck.

Speaking of on-board electronics: not much has changed for the F-150 for the 2020 model year, but they have added the Ford Co-Pilot360 safety suite as standard on the Platinum. That provides auto high beams, blind-spot system with trailer monitoring, pre-collision assist with auto emergency braking and lane keep assist and alert (I turned the “assist” portion off as I found it too sensitive; you can’t adjust its sensitivity like you can the alert system).

Also found not on but in my truck was gorgeous brown leather seating – actually, it’s not really brown but more brick red; brown is reserved for the King Ranch truck that sits just below the Platinum in the lineup. It does well to compliment the Blue Jeans Metallic – yes, “Blue Jeans Metallic” – paint job. And why not? More and more often these days, pickups are all-around vehicles and if owners are looking for the interior quality of an SUV, then they can get it. 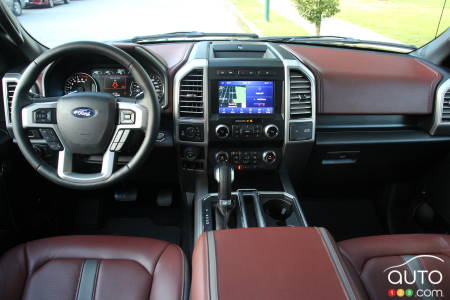 They can get roominess, too. The Crew Cab on my tester provides 1,107 mm of rear legroom and 1,115 mm in the front row. I’ll save you the trouble of checking: that’s about as much room as you get in the first two rows of the Expedition SUV, model with which the F-150 shares a platform. The flat floor, meanwhile, serves the dual purpose of making loading your gear that much easier and providing more passenger comfort as they don’t have to deal with footwells narrowed to accommodate a transmission tunnel and driveshaft.

While my tester had the shorter 5.5-foot bed, the Crew Cab is also available with the larger 6.5-footer. Ford thus deftly offers the best of both worlds in terms of the F-150’s abilities as either work truck or family hauler. Ford’s tailgate access system, meanwhile, may look a little ungainly what with its two-step deployment process, but once done, it works well enough. I just wish there was a little more creativity when it comes to the box itself. Yes, you have the requisite bed lights, accessories rails and tie downs, but nothing in the way of any storage bins mounted to the bed walls, like you might see with a Rambox-equipped Ram 1500 or even the smaller Toyota Tacoma.

Speaking of hauling families, I did fit a child’s seat inside the F-150. I’ve tried this before in trucks, and every one I’ve tried it on has a typical seatback-mounted anchor. On the F-150, though, you have to make use of a somewhat more complicated strapping system that makes installing the seat a little easier, but taking it out was a whole other story. Worth keeping in mind if you plan on regularly shuffling a child seat – or seats -- in and out of the F-150. 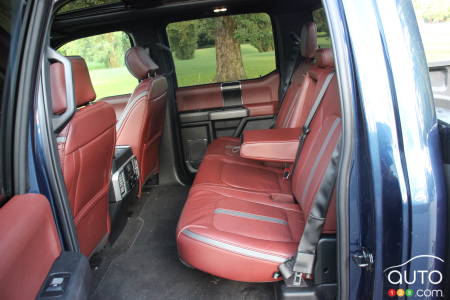 The truck is well-equipped in the second row, fitted as it is with heated seats, USB ports, cupholders – everything a back seat needs, really, plus the extra light invited in by my tester’s optional panoramic roof.

Up front, meanwhile, the footwell isn’t snug at all, the armrests are mounted at the perfect level and the gauge cluster gets a massive TFT display nestled within that shows your trip computer, navi instructions, trailering information and off-road information. My tester also had the FX4 off-road package that provides underbody skid plates, hill-descent control, specially-tuned shock absorbers and 3.31 electronic-locking rear axle.

That’s all great, but the fact you can’t even get a hill-descent control system as standard on such a high-level truck is surprising. I also had a bit of an issue with the infotainment display, which seems small thanks to its thick frame; the display here is dwarfed by examples from Ram and Ford’s own Explorer. Of course, the 2021 model will get a larger screen, but right now, Ford seems to have fallen behind here. 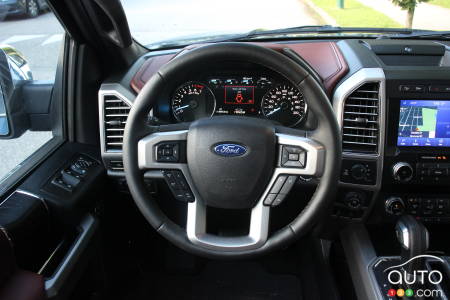 I have no complaints about the infotainment system itself, though. Ford’s SYNC3 interface is a good one, with smooth graphics, a responsive touchscreen and well-aligned menus. Of course Android Auto and Apple CarPlay are on hand, but a string of buttons at the base of the display allow you to easily switch between those apps and SYNC3’s native interface.

Speaking of small, that’s probably the best way to define the buttons used to control the climate control system. Their size makes them tough to operate with gloves on, which can be an issue as one often wants to operate these with gloves on as one waits for the vehicle to warm up.

The mechanics
The F-150’s powertrains are varied – there’s a V8 and a diesel as well as a pair of turbo’d sixes and a naturally-aspirated V6. My tester had one of the most popular of the bunch, a 3.5L twin-turbo V6 good for 375 hp and 470 lb-ft of torque. Why popular? Because it’s in the sweet spot of the lineup, offering more torque than everything but the diesel and more power than everything but the V8. 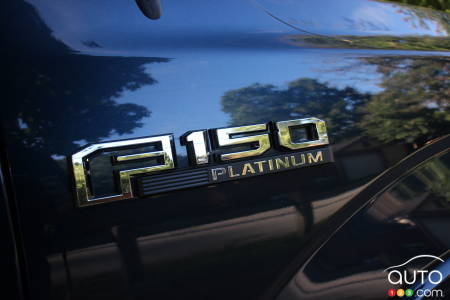 My tester also had a 10-speed auto and max trailer tow package, which adds a 3.73 rear axle, class IV receiver, engine oils cooler, Pro Trailer Backup Assist 4/7-pin harness and trail brake controller. Add an upgraded rear bumper and front stabilizer bar, and you have the ability to tow almost 6,000 kg, which puts the F-150 near the top of the segment when it comes to towing.

While I like the power and deep-throated growl of a V8 as much as the next guy, the 3.5L EcoBoost here is a gem of an engine. It’s got excellent pulling power, very little turbo lag and the way it interacts with the 10-speed automatic is right on. There’s even a bit of a growl here; it’s somewhat artificially augmented but that’s OK as it’s hard to get much of an engine note out of turbo’d motors at the best of times.

Couple the powertrain performance with a ride that feels almost as luxurious as that of the Expedition King Ranch I recently tested, and you’ve got a pretty good 1-2 punch in terms of the F-150 experience. Its capabilities, meanwhile, make for an excellent 1-2-3 punch and it’s not hard to see why these trucks are so darn popular. Ford knows how to build them, they know what their buyers want and they seem to be able to hit the mark every time. I suspect the case will be no different when the new truck arrives next year. 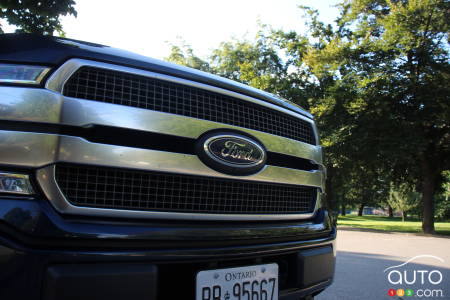 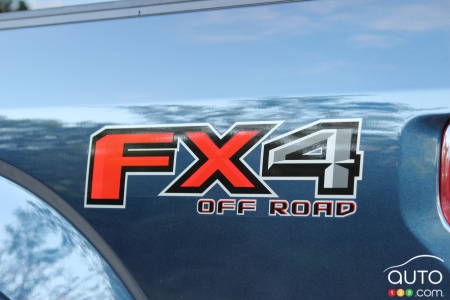 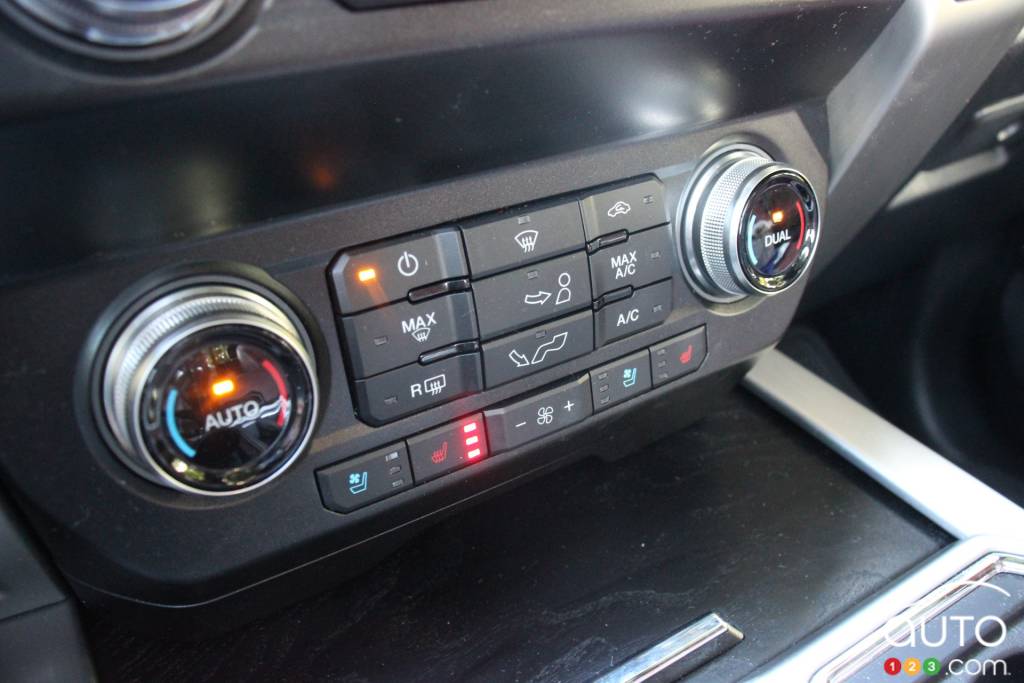 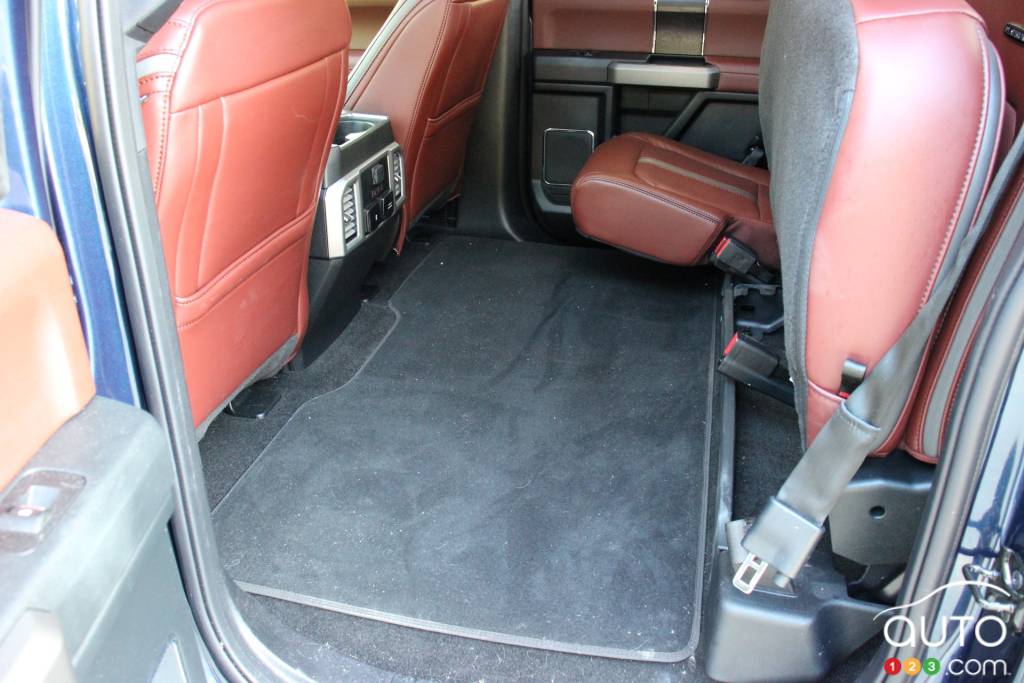 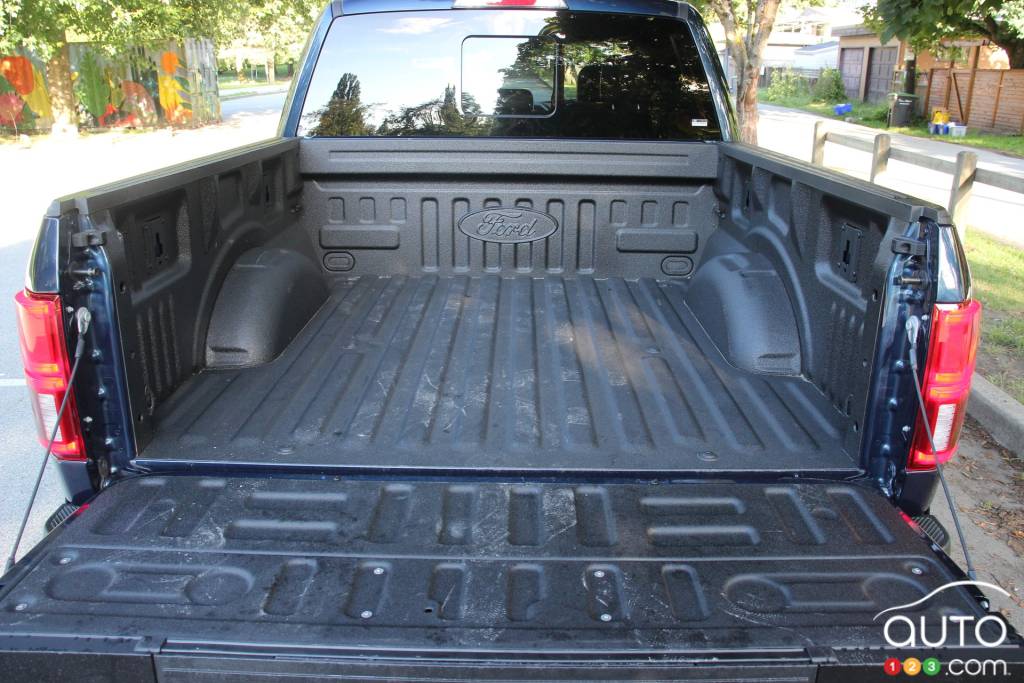 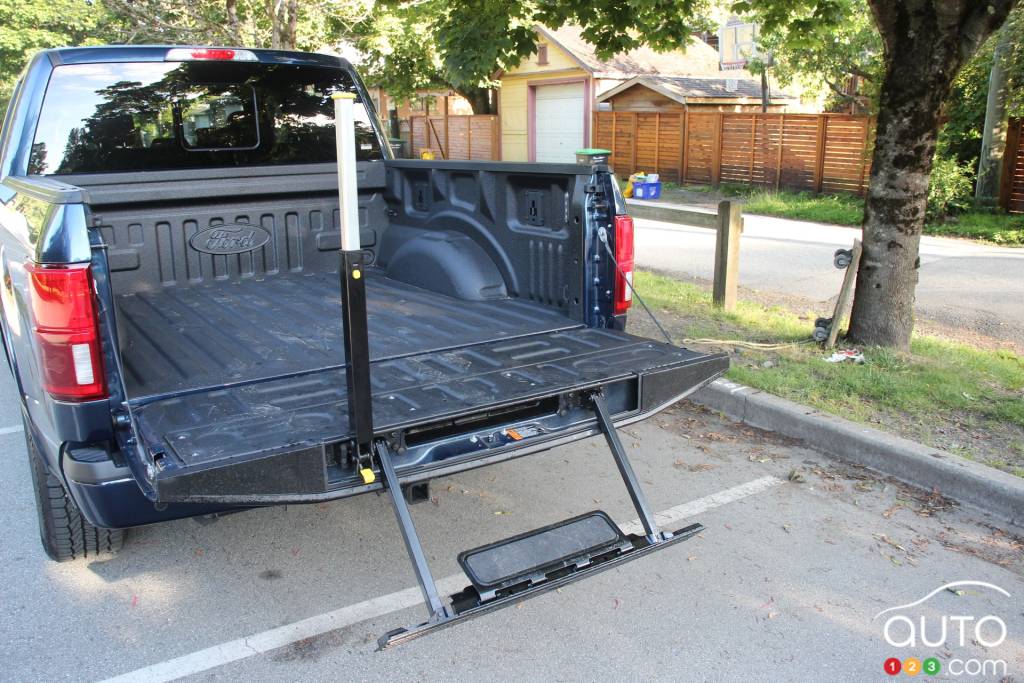