This refined and elegant sedan will look to gain a bigger share of a segment being abandoned by American automakers Automotive columnist: Denis Duquet , Updated: 2019-10-09

Montgomery, AL - While the American automakers queue up to head the door of the car segments, Hyundai – along with several other Asian manufacturers - is staying put. The reason for this is quite simple: on the American market, consumers bought up some three million sedans over the course of 2018. What’s more, recent surveys indicate a renewed interest in cars as opposed to SUVs in the coming years.

For the Hyundais of the world, it’s a no-brainer to stick it out and continue to develop four-doors and hatchbacks.

So it is that we’ll be seeing a new-generation Sonata in dealerships before the end of 2019. Not only that, but the car will be assembled in an ultra-modern plant located in a suburb of Montgomery, Alabama.

That new generation is the Sonata’s eighth, and you have to admire the incredible progress Hyundai has made with this model over the years. The car we went to meet up close is a mature, homogeneous product, though given how refined and sophisticated the outgoing edition of the Sonata is, the new 2020 is more of an effective and reassuring evolution than a technical or visual transformation.

Play of lights
In recent years, the model’s stylists have continually refined a silhouette already appreciated for its elegance. This time, the chassis gets lowered and the wheel base stretched, which results in a cabin longer by 64 mm and a front section that supplements its already-plunging hood with the lower position to great effect.

Like just about all new-car models of recent vintage, the paint finish is of high quality, the construction beyond reproach. Which means that to add notable new touches, the designers turn to things like the LED headlights. These, by the way, have a virtually limitless lifespan, and their format lends itself to a wide range of possible designs. On the new Sonata, there’s a lit-up ring that starts beneath the main beams and climbs up along the wing to link up with a chrome strip that runs to the doors. By day it’s elegant, and by night it’s fascinating to look at.

The back end gets a long strip that lights up in red, and the extremities of which wrap partially around the rear lights.

The interior
Inside, the dashboard is fully modern and quite elegant, and you can sense there’s been some inspiration taken from Mercedes-Benz vehicles, for instance in the horizontal infotainment screen that seems to stretch right to the driver’s data displays.

While it’s getting into the back row requires a little more bending and grunting than some other sedans, once inside headroom is virtually the same as what you’d get in any car of this size. The environment is welcoming and the seats are plenty comfortable, at least in the range-topping version we were given to test-drive on this occasion.

Similarly evolved mechanics
As the style and design of the new Sonata are the result of constant evolution, so the mechanics of the model have been notably improved. The 2.5L 4-cylinder engine gets multiple improvements for 2020. For example, piston travel has been increased to help reduce vibrations, while the exhaust manifold is linked directly to the cylinder head. This naturally aspirated Atkinson Cycle engine produces 191 hp, or six more than the previous 2.4L unit. 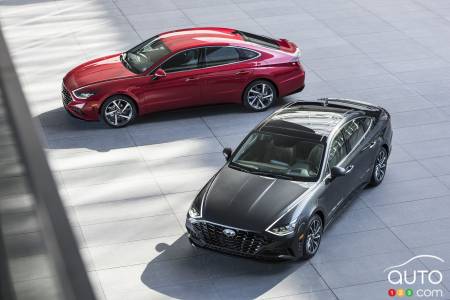 It might have a smaller cylinder capacity, but the new version of the 1.6L engine also in the product offering is a more-sophisticated machine. The completely revised unit produces 185 hp, but more importantly its  maximal 195 lb-ft of torque is available as of 1,500 RPM. In addition, not is the opening of the valves variable, but their duration of opening is as well! Hyundai has certainly traveled many miles since its rustic early powertrains.

The only possible transmission is the 8-speed Shiftronic automatic transmission. The driver can choose between four available drive modes: Smart  Normal, Sport and Custom.

The key’s in your smartphone
Let’s be honest, these days most cars in this segment are technically identical, more or less, with 4-cylinder engines with outputs varying between 180 and 205 hp, an 8- to 10-speed automatic transmission and on-road behaviour that rests on the effectiveness of the front and rear suspensions.

So how does a manufacturer distinguish its products from others? One obvious way is to focus on accessories and safety features. In terms of the latter, the new 2020 Hyundai Sonata comes with a dozen elements more or less the same as you’ll find in competing models, for instance rear-seat passenger detection (though that’s relatively recent), blind spot monitor and intelligent or adaptive cruise control.

That’s all fine and good, but one of the more impressive features here is what the automaker calls BVM, or Blind Spot View Monitor. It displays a side view showing 50% of the side of the car when the driver activates the turn signal. The image is circular and it replaces the RPM gauge on the right and the speed indicator on the left for as long as the turn signal, either left or right, is turned on. It’s ingenious, and I found it highly practical.

But that’s not even what the Hyundai engineers seem most proud of. That would be the digital key integrated into users’ smartphones via an Android app, which allows for unlocking the car and for setting the seats and the side-view mirrors to the desired setting, among other tricks. The app can be used to control any number of settings and functions, either near or in the car, or remotely. Even cooler, you can unlock the doors of your Sonata just by placing your phone in the vicinity of the door handles.

Want more? When the car is parked in a tight space and you want to get it, the app allows you to, by the push of a button, have the car move on its own to where you’re standing and stop so you can just climb in.

Hyundai’s engineers took pains to explain that it will be virtually impossible for hackers to get into the smartphone app or steal data from it.

Poised and quiet
In terms of technological sophistication, refinement and safety, the 2020 Sonata is in most essential ways similar to the models it competes with, the most notable of which are the Honda Accord, Toyota Camry, Nissan Altima and Mazda 6. The Sonata sets itself apart at least a little via its solid construction, modern powertrains, elegant shape and a few interesting tech add-ons.

As for its behaviour on the road, we found from our etst drive little to quibble about, The sound insulation is excellent, the on-board buttons and commands are well laid-out and easy to use, and the transmission buttons on the central console are easy to reach and use as well.

In general, this is a vehicle with no evident hiccups, that takes care of business with a minimum of fuss and will cause owners little or no worry. We would have liked a little more bite from the drive itself; in Sport mode, the steering is a little more incisive, the gaps between speeds on the transmission a little bigger to allow for improved accelerations, and the suspension gets a little firmer, but that’s about it.

It’s worth noting that our test drive took in place in Alabama on an unusually hot day, with temperatures maxing out at 102 Fahrenheit (or 38 Celsius). We did take that into account when appraising the 1.6L turbo engine, which inevitably suffers as the air get hotter.

I drove around 250 km on the day, and found the performance of the engine to be competent; it would probably have risen a little above that yardstick if the mercury had sat lower. Accelerations were good enough and passing was uneventful, but the engine can do better in colder weather, I’m sure of it. As for the transmission, nothing to report really; like a good stay-at-home defenceman, if you don’t notice it, it means it’s doing its job.

The 2020 Sonata is refined and elegant, and it comes with either of two sophisticated engines that will deliver fuel consumption under 10L/100 km combined.

For Hyundai, at play with this model in a segment that’s being largely abandoned by the Americans, it’s an opportunity to do big things with the new-and-improved Sonata’s market share.

The eighth-generation 2020 Hyundai Sonata sedan is a thoroughly modern affair, and like the company that builds it has certainly come a long way in not that ...