Arjeplog, Sweden - Here’s the thing: No matter how many new cars, crossovers and trucks I drive, or how many advanced technologies I get exposed to, I can’t help but marvel at just how advanced some of the systems that run these vehicles have become. Having said that, the argument that crops up regularly is whether or not these systems remove too much responsibility from the driver. The risk is that they may forget that the laws of physics still play, and that cars and SUVs are heavy and we need to make sure we’re prepared for any eventuality.

I recently spent a few days driving the 2020 Jaguar F-Pace S SUV at the Jaguar Ice Academy on ice- and snow-covered tracks, and I was left once again to marvel at where we’re at technologically. But I was brought back to reality as well. The Jaguar Ice Academy, for those unfamiliar with it, has as one of its stated goals to help make drivers more comfortable behind the wheel in adverse conditions.

“Some people, they’ve never driven in these conditions before,” said Karl Jones, one of the chief instructors at the academy. “And (the academy) is just about understanding what the car’s doing underneath them and getting to understand what oversteer and understeer is and learning to correct the slide.”

While we may think of terms like “understeer” and “oversteer” mainly in a racing context, it’s those very same things that can cause issues on the road every day. When you’re accelerating, the weight comes off the front tires, their contact patches shrink and you don’t have as much traction, which forces the nose wide. Braking – or even lifting off the throttle – will force the weight back forward and onto the front tires, enlarging their contact patches. At that point, you then accelerate to have the rear end follow through the turn. If you’re on a snow-covered, slippery road and you feel your car washing wide, a quick brake and dab of the throttle can get you right on-line again.

The 2020 F-Pace S has an advanced AWD system that allows torque to be distributed to either axle, then distributed once again to individual wheels if the system feels that’s what’s required. The SUV also has all traction control (TCS), stability control and ABS systems you would expect to find. 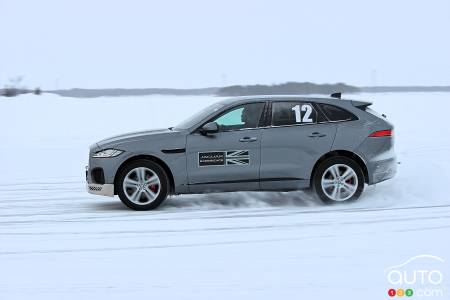 On this track, though, even on studded tires it doesn’t take a whole lot to get it squirming. One of the exercises we did at the track was a low-speed handling course where we’re meant to try and get it out of shape, and work on how to get back on track. Even with all the systems engaged, in these conditions, it took little more than a dab of the throttle to get that back end going.

With TCS activated, it would come back online but do so in an abrupt fashion by reducing throttle response. Once that happens, the driver is no longer in total control and that can be a little off-putting. It pays, then, to learn what a car’s doing regardless of what electronic help it may have.

So what did we do in the F-Pace? We turned off TCS out there on the ice and were told to induce a slide whenever possible, and to get ourselves out of it. The goal was to able to slide the F-Pace around the entirety of one of the course’s hairpins.

The F-Pace nicely and quickly became a willing and able partner through the various modules we were undertaking. In fact, while we also had the pleasure of driving the RWD F-Type sports car on similar circuits throughout the weekend, it was the F-Pace that kept coming to mind when I considered my best work of the day. A well-sorted AWD system will do that - give you the confidence to hang it out there, and do well to communicate when it’s ready to pull itself back online on throttle, with little steering input required. 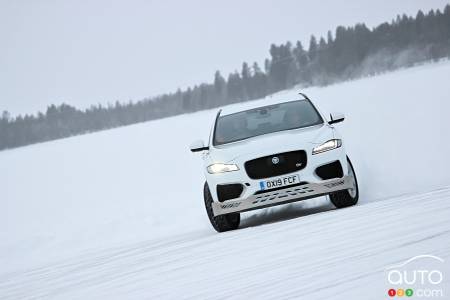 You have to thank the supercharged V6 engine found under the hood (380 hp, 332 lb-ft of torque) for much of this, as well. Being supercharged, it’s nicely progressive and linear, allowing you to meter out the throttle even with the thick-soled winter boots I was wearing in the 15 below freezing (plus wind chill) temperature.

Power is transferred via an 8-speed automatic transmission with paddle shifters, and it makes for a good pairing in these conditions. The gears are held on to for varying lengths depending on which transmission mode you’re in – D or S for Sport. We were told to keep it locked in S, because it allows for quicker throttle response and more-eager drift scenarios. Plus, when we did eventually get to the straights it would pile the speed on quicker which, again, challenged us to have a quicker response time as we entered turns.

Speaking of faster turn entry: from the low-speed technical work we were doing on the first module, we turned to the high-speed sweepers of one of the open circuits. Throttle input and balance were important here as well, but steering inputs were now required to be a little more precise in order to balance the F-Pace all the way through the sweeper. Once you turn in at these speeds and the tail starts to come around (again: no TCS), too much counter-steer – steering towards the outside of the turn as the tail begins to slide – and you’re going to come around as the weight shifts (if oversteering), or you may push too far wide (if understeering). It’s a bit of a knife’s edge but when you hit it, it’s a mighty fine feeling.

It's here that the F-Pace did start to show its girth, though. Those laws of physics? They dictate that a vehicle gets heavier as it begins to move faster (FYI, the F-PAce starts out weighing in at 1,857 kg), and the effects all that momentum has on the drive are more easily felt.

I felt the steering would possibly benefit from being a bit lighter, believe it or not, and with a little more feel. On bumpy surfaces like this, lack of feel shouldn’t be too much of an issue, but still, it stands as a bit of a strike against the F-Pace’s dynamics. Probably not a huge issue, but worth a mention.

The chassis and suspension tuning, however, is on point here. Sure, you’ll feel some body roll when compared to the F-Type, for example, but that’s not really a fair comparison for the F-Pace. For a tall-riding SUV, this Jaguar keeps its body nicely in check, which, once again, matters when it comes to weight transfer. On the open road in the real world, meanwhile, the reduced roll makes for a more comfortable experience overall. 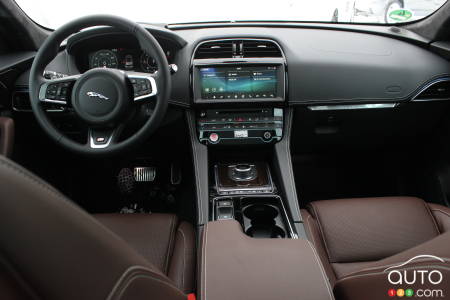 The F-Pace has quite the responsibility on its shoulders. These days, crossovers and SUVs play a key role for luxury manufacturers. To wit, Porsche, BMW and Mercedes-Benz all have a number of CUVs/SUVs in their portfolios. So the F-Pace needs to impress a very tough crowd. What’s more, as F-Pace sales go, so, likely, will Jaguar’s sales as a whole.

In these conditions, the F-Pace did well to prove its meddle. Its AWD system is capable and confidence-inspiring, and aside from those small steering issues, it was a willing partner as the goings got less run of the mill and more challenging.

Meanwhile, even with the front splitter guards our tester had, the S looks the business. It’s lithe and aggressive enough, yet it includes the classy touches always associated with the Jaguar brand, like the black mesh grille, body-coloured mirrors and hockey stick-shaped LEDs.

The taillight lenses, meanwhile, echo the ultra-slim examples found on the F-Type sports car, just enlarged. The chocolate-brown interior is also the tops – I’ve found this colour scheme can go either way towards richness or towards an overly plastic-y feel, and Jag has the former nailed here. It’s probably the colour I’d have for the inside of my F-Pace; for the exterior I might go for something a little brighter than the silvers, whites and greys seen here, though.

Either way, with the 2020 Jaguar F-Pace, you get an SUV that can be counted on both when the going gets rough and when its gets a little quicker, too. Add the everyday comfort provided by the well-shaped and adjustable seats and fast-acting climate control system, and you’ve got the complete package. 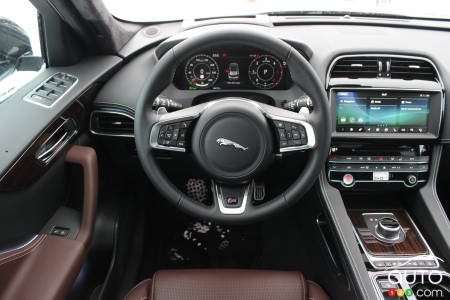 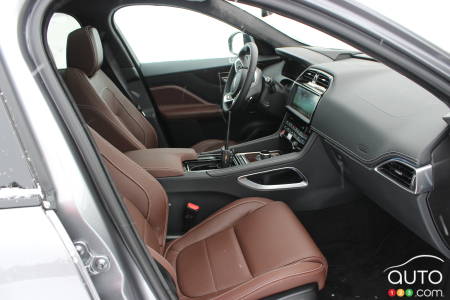 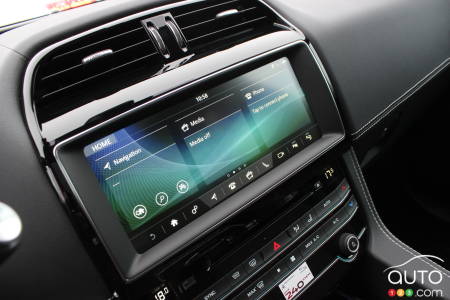 The new F-Pace we test-drove in the south of France marks the third time a Jaguar-Land Rover vehicle gets the SVR treatment from Jaguar’s five-year-old Speci...