Salt Lake City, UT - In hockey, the fourth star is unofficially awarded to the player who had a solid game but not enough to take a bow on the ice. In the Olympics, fourth place gets an athlete pats on the back but not a place on the podium, and not a medal.

The Nissan Titan is that guy. Despite its several athletic qualities, it never quite makes it into the spotlight.

And what can that guy do to change things? He can go home and give up, or double down and come back harder. Nissan has taken the latter route with its Titan. Though there’s no guarantee of success, you can’t say Nissan isn’t trying its best to hoist the pickup up alongside the category leaders.

Thus for 2020, the company has made a number of changes, and while Nissan has hopes for its Titan, next to it on the starting line are the Usain Bolt, Carl Lewis and Jesse Owen of pickups. Intimidating, you say? 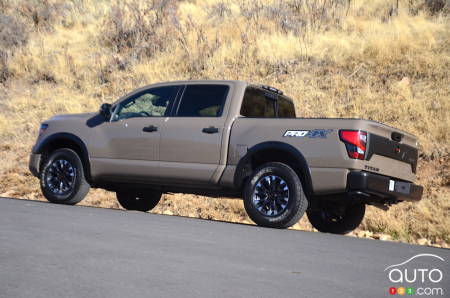 For the moment, the realistic objective – though you won’t hear anyone at Nissan admit this – is… fourth place. We went to Utah to see if it has what it takes to get there.

The styling
The new Titan has gotten numerous styling adjustments; not only that, that each variant gets its own traits. The top-end Platinum Reserve sports a luxury look, while the Pro-4X, designed to go play in the mud, looks more rough-and-tumble, for example.

There are also new LED headlights, LED lights for the bed, a branded Nissan logo for the Pro-4X and other bits to give the model and its variants character. Most striking is the very visible warrior’s mask, the model’s signature badge. You’ll find it in the headlights, in the rear lights and in the plastic strip on the Pro-4X versions. 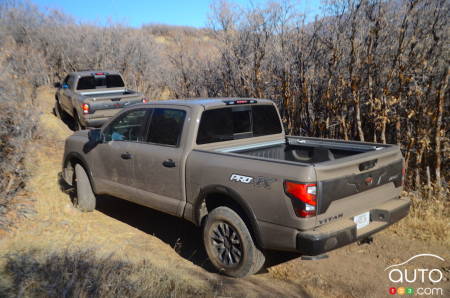 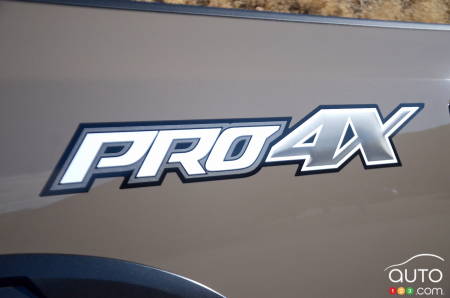 In the case of the Pro-4X, Nissan has really gone all out – not surprising given that it’s the best-selling version of the Titan. Its share of sales varies from market to market, but in general it accounts for between 35% and 45% of the model’s sales, according to the folks from Nissan.

The configurations
This is actually pretty simple: there’s exactly one choice of cabin, a Crew Cab. Nissan has simplified the product offering to focus on the most popular variants. Some may question Nissan’s refusal to match competitors in offering a myriad of configurations, but we suspect the company is being careful with its limited resources at this point.

Did we say limited? Nissan poured $230 million USD into this mid-cycle revision. The automaker could have used some of that to come up with different combinations of beds and cabins, but it preferred to focus on what it considered essential, i.e. the model image, the equipment included and the capacities of the vehicle.

Is Nissan on the right track? That’s the $230-million question. More on that below. 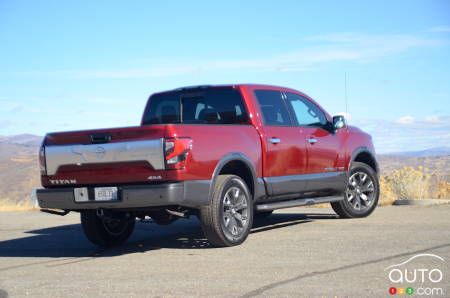 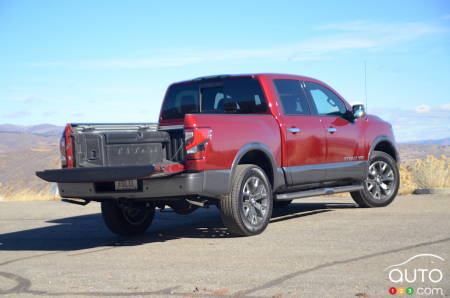 As for the trims, there are four in all: S, SV, Pro-4X and Platinum Reserve. Add to those the different available options packages.

Capabilities
In terms of what the Titan can do, Nissan chose not to simply copy what the competition if offering, wisely figuring that’s a battle that’s lost in advance, and that well be ruinous to the company. In any event, the towing capacity of the truck is 9,210 lb, which is said to meet the needs of 90% of buyers in this category.

Nissan focused on making the act of towing easier and more accessible, for example by the addition of a package available on the SV version’s base model. Careful, however, because if you add the Convenience package to this version, you lose the Towing package. You gain it back if you opt instead for the Premium package. The product offering can be a little complex. Which is why the automaker’s website is there; go play on there for a while and you’ll be able to sort out what it is you want and can mix and match.

The mechanics, including that transmission
Capabilities also means what kind of powertrain is available to buyers. Unsurprisingly, for 2020 we get the same engine under the hood, a 5.6L V8 that is a proven commodity. This year its output has been boosted to 400 hp and 413 lb-ft of torque. Users won’t really notice much difference, especially over time, but rest assured you won’t feel underwhelmed when you’re aggressive on the accelerator. 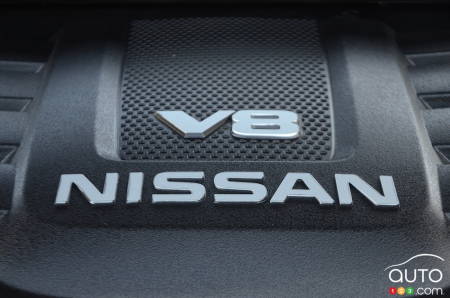 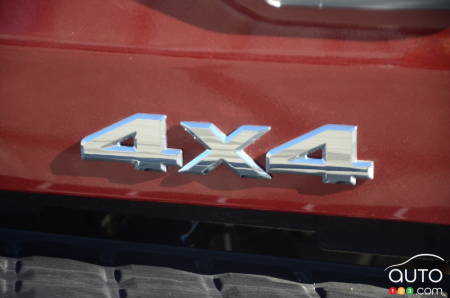 The big difference is with the transmission. Nissan has jettisoned the 7-speed unit for a new 9-speed transmission. The move had two objectives, according to the manufacturer: improved fuel economy, as well as superior performance when the truck is loaded down. Nissan wanted to integrate a transmission that is less hesitant, that reacts more promptly when required when there’s a load piled in the back.

For our test drive we had the opportunity to pull between 4,000 and 6,000 lbs, which happens to be the average weight pickup users generally tow. In both this situation and in regular driving in and around Salt Lake City, we found no real faults with the new transmission. The same applies to the drive itself, for that matter: it was solid, if nothing to write home about particularly.

One thing remains constant, however, and that’s the appetite of the 5.6L V8. Nissan didn’ yet have official figures to give us, but the expected average for this engine is still in the neighborhood of 15-16L/100 km. That’s a lot, in fact it’s too much.

Nissan has some expertise in the field of electrification, and frankly it might want to consider using it to come up with a more efficient powertrain for this model.

The interior and the tech 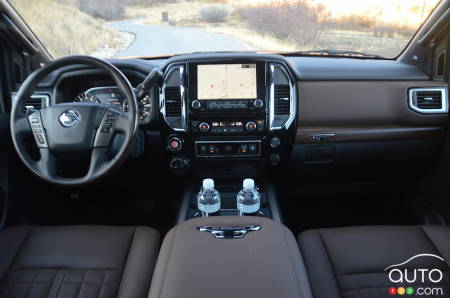 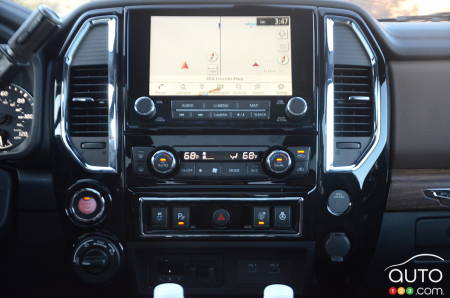 A quick rundown of Nissan’s changes to the interior and the technologies included in it starts with the quality of the materials, visibly improved this year. The visual design has been lightly revised just to keep its look up to date.

More substantially, the multimedia screen (8-inch or 9-inch, depending on the version) now display the latest generation of the NissanConnect system. From the get-go it’s clear the system is now more convivial and benefits from higher-quality graphics – much higher-quality, in fact. Apple CarPlay and Android Auto are included standard, as are a range of connected services.

Access to a Wi-Fi network is also possible, as is an immense panoramic sunroof that bathes the interior in light, but that also messes with the visibility of the data on the screens and dials due to glare.

Notable among the standard features are a high-quality Fender audio system as well as Nissan’s highly regarded Zero Gravity seats that ensure a high level of comfort. 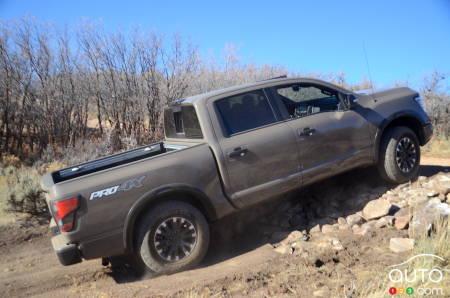 A few words are in order regarding the Pro-4X version, which really puts the Titan in its best possible light. It comes with black-finish 18-inch all-terrain wheels, Bilstein shocks, locking rear differential, additional skid plates and LED daytime running lights. Black accents are found everywhere, adding to the rebellious character of this variant.

Inside, this version gets its own unique presentation, with Pro-4X logos everywhere to remind you what you’re sitting in. This variant gets a pretty comprehensive list of included equipment, to which you can add an options packages for extra bling.

Conclusion
The 2020 Nissan Titan truck delivers everything needed to meet the needs of the vast majority of buyers. On the other hand, it doesn’t really offer anything not also found on its rivals from the American Big Three.

Nissan’s bet is on the uniqueness of its model. The company wants this truck to attract the buyer who likes difference, who doesn’t want to acquire one of those trucks that everyone else is driving, which is to say a Chevy/GMC, a Ford or a Ram.

From our vantage point, the Titan has consolidated its gains and staked out a legitimate claim to fourth place on the charts. That’s not carved in stone, of course, because it still needs to overtake Toyota, which continues to outpace the Nissan product in terms of sales even with an aging vehicle.

The road ahead is a challenging one, no doubt.

Pricing for the 2020 Titan, along with the fuel consumption figures, will be released as the model approaches its go-to-market date, set for early in the new year. 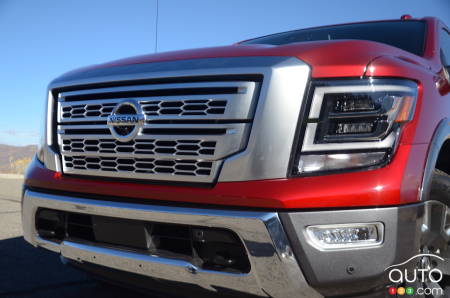 The uniqueness of the model
The Pro-4X version
The new multimedia system, user-friendly and efficient 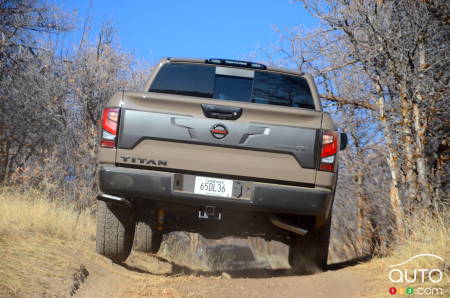 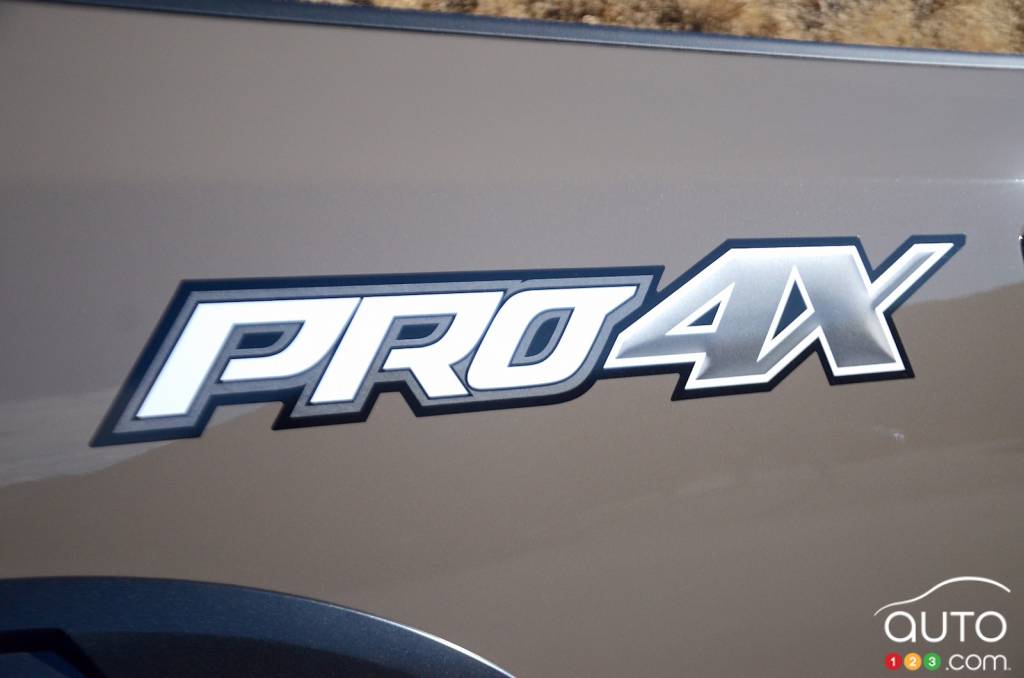 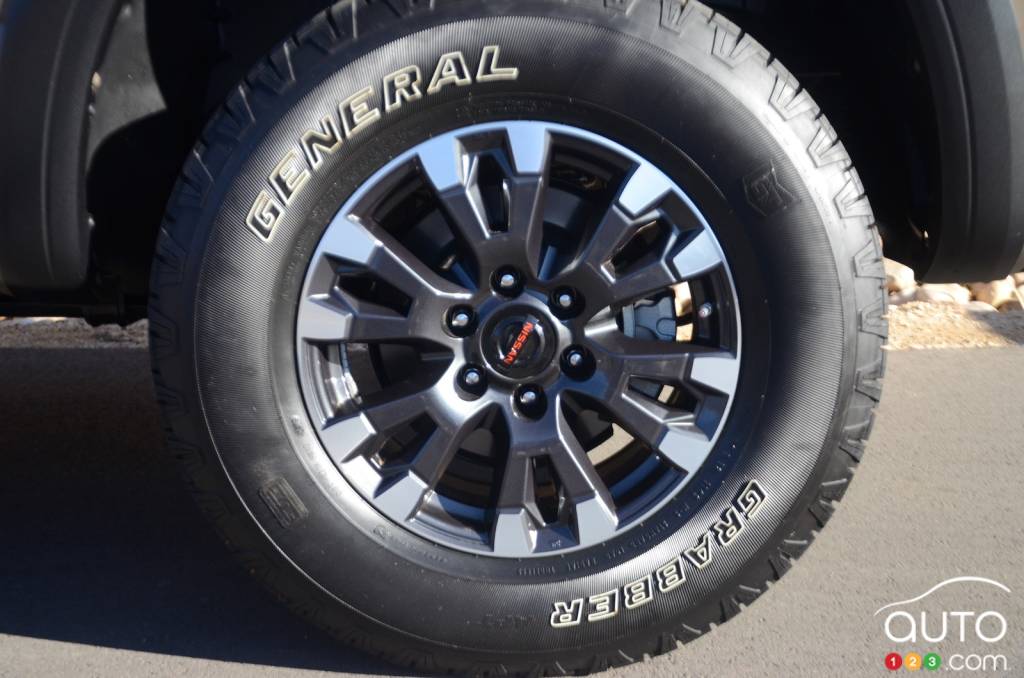 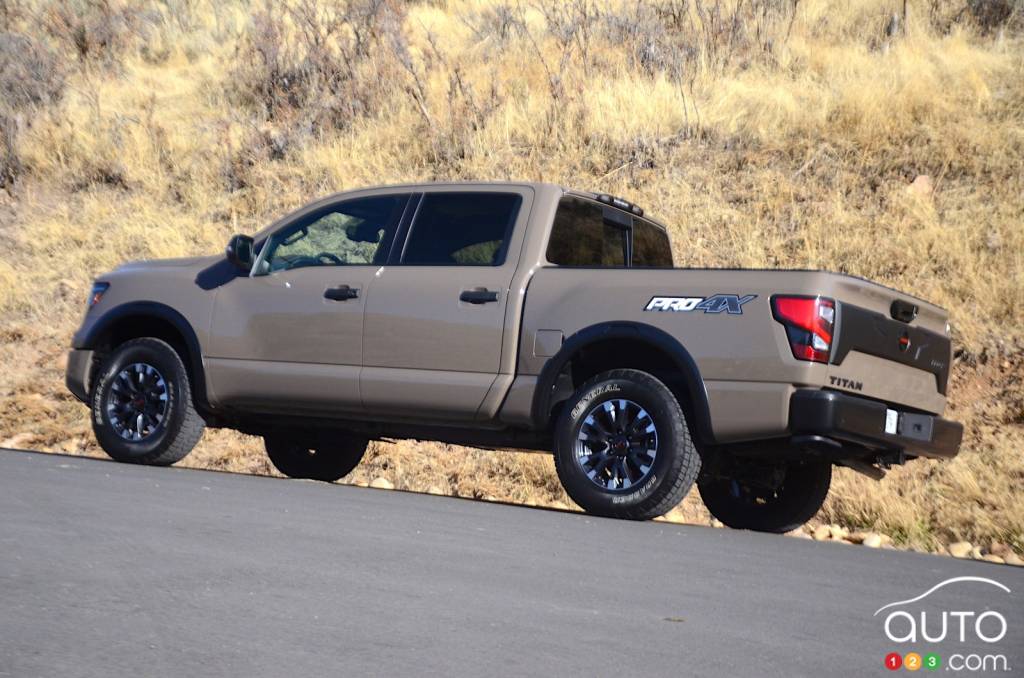 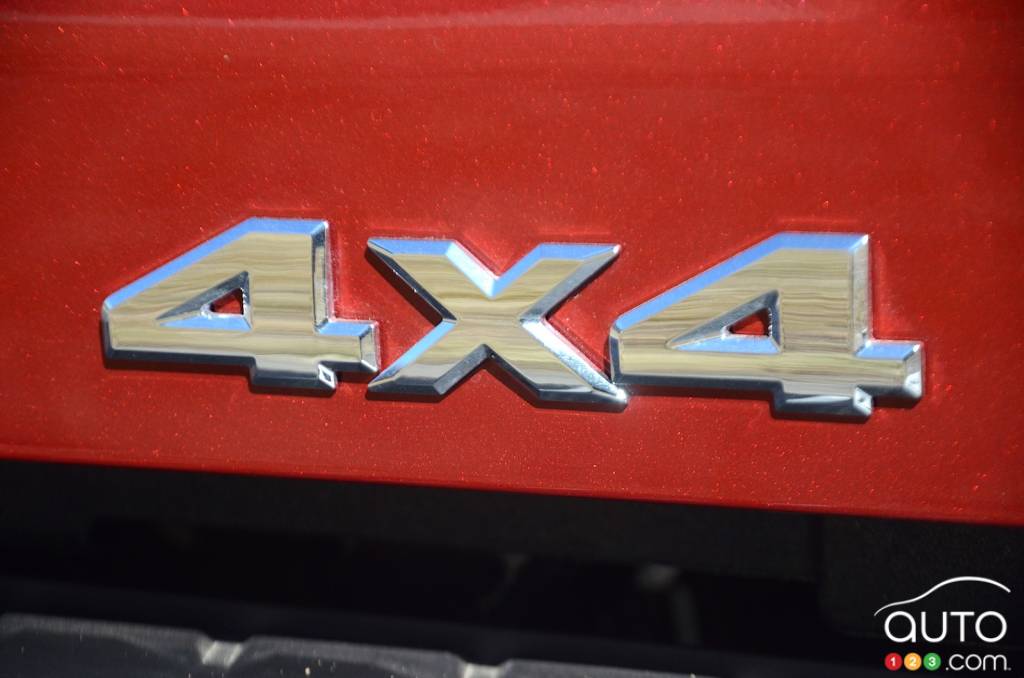 Nissan is bringing a few changes to its pickup truck for the new year. The 2020 Nissan Titan will be revealed officially next week, at which point we’ll know...