As summer rolls in and heats up, Auto123 reviews the 2020 Porsche 911 Carrera S Cabriolet.

Whenever a new generation of the venerable Porsche 911 is released, the same questions and observations come up, and not without reason: “Looks the same. How’s it different?” and “The new 911; same as the old 911” and “Jeremy Clarkson was right; it’s still just a Beetle”. Thing is, though, I’ve just driven the latest 911 and it has so much more to offer than meets the eye.

This is important because if I’m being honest, the new 911 doesn’t look all that different than the old. To be sure, it is 45 mm wider up front and gets hood creases hitherto seen only on the first-gen 911. The panels have all been shaped differently to add a little more muscle overall, and surprisingly, the way the rear light bar now mimics what you see on the Panamera and Cayenne actually works well here. And how can you not like the big “Porsche” scripting across the rear fascia? That has to be one of my favourite details, even though it’s not exactly new. 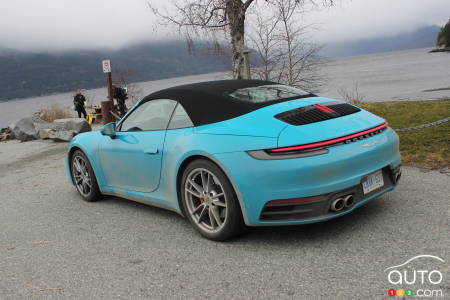 My tester was the Carrera S designation, meaning rear-wheel drive as opposed to all-wheel drive. It used to that meant a narrower body overall but that’s not so anymore; you still get those great big hips even if you’re running a RWD model.

A feature my car didn’t have but is also new for 2020 is a set of rims styled to look like a modern take on the classic Fuchs wheels of the 1960s and 1970s. Blame the snow tires on my tester for that one.

Inside, it’s a kind of “addition by subtraction” scenario. The gauge cluster, still classically-styled with five gauges arranged horizontally, remains, but only one of these – the central tachometer – is an actual gauge. The rest are all TFT screens, with the two on the right becoming one when you elect to have your GPS displayed there, via a scroll wheel on the steering wheel’s spoke. The same goes for the centre console; gone is the touch panel from the Panamera and Cayenne, replaced with a grouping of five buttons below the shifter with two knobs and three toggle switches above. 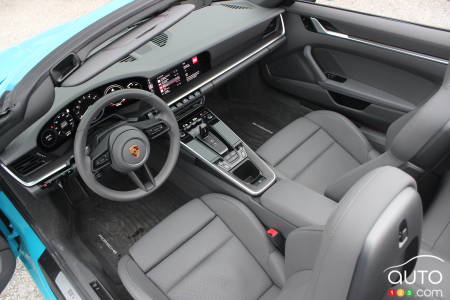 It’s super-simple, and those toggle switches are a joy to operate with their texturized touch points and positive action. There’s another bank of toggles above those for your drive mode, TCS and damper adjustment, and above that, Porsche’s latest infotainment interface that is slick and has compatibility for Apple CarPlay and Android Auto, all connecting via Bluetooth. That means you don’t need a set of unsightly wires dangling from the dash, though I did have to plug in my phone (there’s a USB and USB-C port) into the slot located under the armrest lid in order to charge it as there’s no wireless charging.

The name of the game here is simplicity – even the steering wheel controls are kept tight and compact on each spoke to keep things as streamlined as possible. Indeed, it seems Porsche believes there should be nothing in here to detract from the focus on driving.

That’s an attitude supported by the driver seating position, which, as has been the case for Porsches for as long as I can remember, is right on the money. Just a little upright to ensure the compact wheel falls neatly into your hands and you have a great view forwards. Of course, the fact there’s no engine in front means Porsche can design a lower hoodline for an even better view out. I like to think of the front fenders as a kind of gunsight aimed straight down the road ahead.

On the road
Power for the Carrera S is rated at 443 hp and 390 lb-ft of torque from a turbo flat-6 (everything Porsche is turbocharged these days) fed through an 8-speed dual clutch PDK transmission to the rear wheels. The 0-100 km/h sprint can be achieved in a claimed 3.9 seconds –which, when you think about it, is positively bonkers. It wasn’t that long ago that supercars were proud to be below the four-second mark (remember when the McLaren F1’s 3.6 second time was the biggest thing in acceleration?), and here we have essentially one of Porsche’s biggest sellers doing almost the same thing.

In fact, if you opt for the coupé version that shaves 70 kg of weight off the convertible and add the Sport Chrono package, expect that 0-100 time to drop to 3.5 seconds. Take that, McLaren F1!

While I didn’t have the Sport Chrono and its trick exhaust, Sport Plus mode and lowered ride height at my disposal, the C2 felt, if not blindingly, then stunningly quick off the line. With Sport mode active, you don’t need a performance recording device to know those 0-100 numbers are real. The acceleration is so visceral that I was smitten just by the sheer force of it all, numbers be darned. 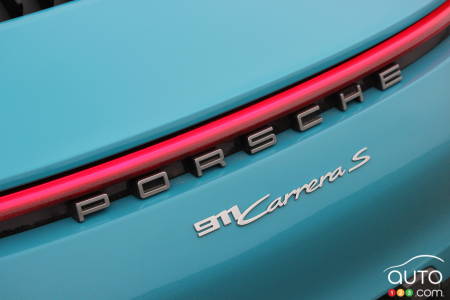 This is a seriously quick car that manages to mask the fact it’s hauling around the extra weight of the drop-top’s roof mechanism (the top, meanwhile, stows or deploys in about 12 seconds and can be done at speeds up to 50 km/h). The same goes for any acceleration I asked of it while at speed; all I had to do was flip the downshift paddle a couple of times, mash the throttle and feel how an extra 30 km/h was added to the overall speed, just like that. I was never hard up for power when it comes to passing manoeuvres, I can assure you of that.

A quick double-back to that compact steering wheel: it’s the gateway to a properly lively and responsive steering rack, but that’s not the whole story. The 911 is now in its second generation with electronic as opposed to hydraulic power steering, and the change is felt in the new 911. On a wider road with longer sweeper bends, I was perfectly happy with it. It doesn’t require constant adjustments to keep you in your lane, and you’ll have all the responsiveness you’ll need to undertake quick avoidance moves and so on. It’s also easy to live with around town, requiring very little elbow grease at low speeds. However, as the turns become more frequent and I activated Sport mode, I didn’t get quite the drastic change in steering as I’d hoped, and as the mannerisms on the more-open road promised. The feel off-centre was lacking just enough to be noticeable, and I kept waiting for that wonderful heft that 911s have always been known for. Maybe it was more evident because of just how everything else about the 911 just feels so solid, that the numbness felt in the steering just doesn’t quite reach the heights achieved by the rest of the drive experience.

Of course, it’s not that the 911 doesn’t handle well; quite the opposite, in fact, as the steering is ultra-responsive and translates to a very point-and-shoot car. The truly amazing part for me was how the only time I really felt any structure and rigidity sacrificed by losing the top was from a persistent squeak over my left shoulder as I went over bumps, and that is undetectable when at speed. If you’re to have a convertible sports car – and you want something a little more major that a 718 Boxster or Mercedes-Benz SLC, and a little more committed than a Mercedes SL-Class or BMW 8 Series cab – then it’s not a bad way to go.

For me, I think I’d still opt for the coupé, and I say that without even having driven it. That’s because the convertible performed so well, I can only imagine how over-the-moon I’d be with a hardtop and Sport Chrono package. 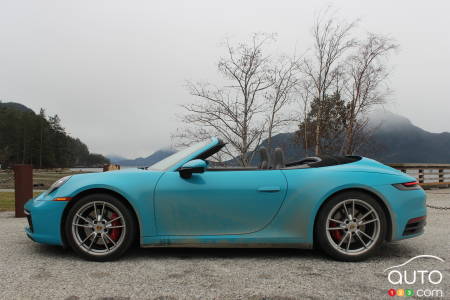 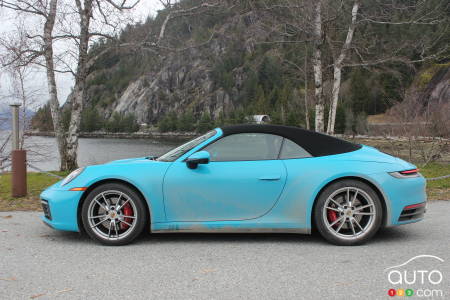 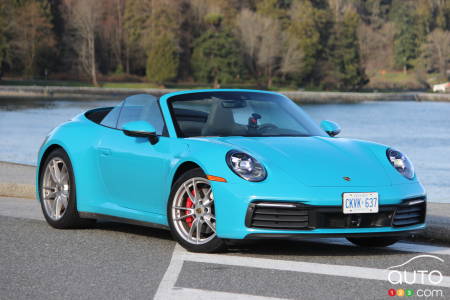 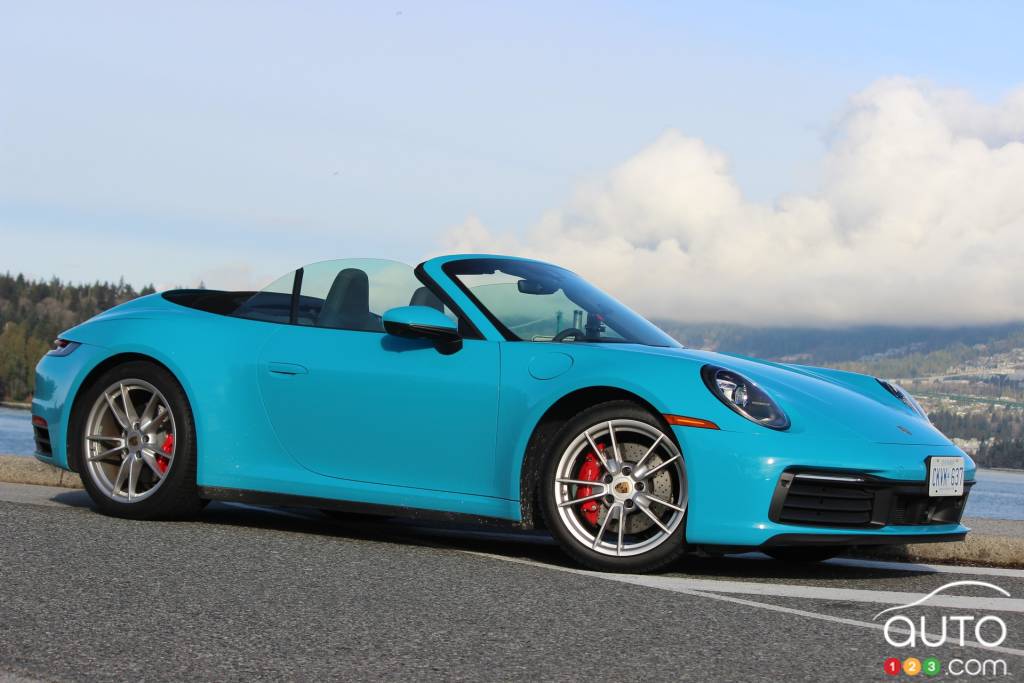 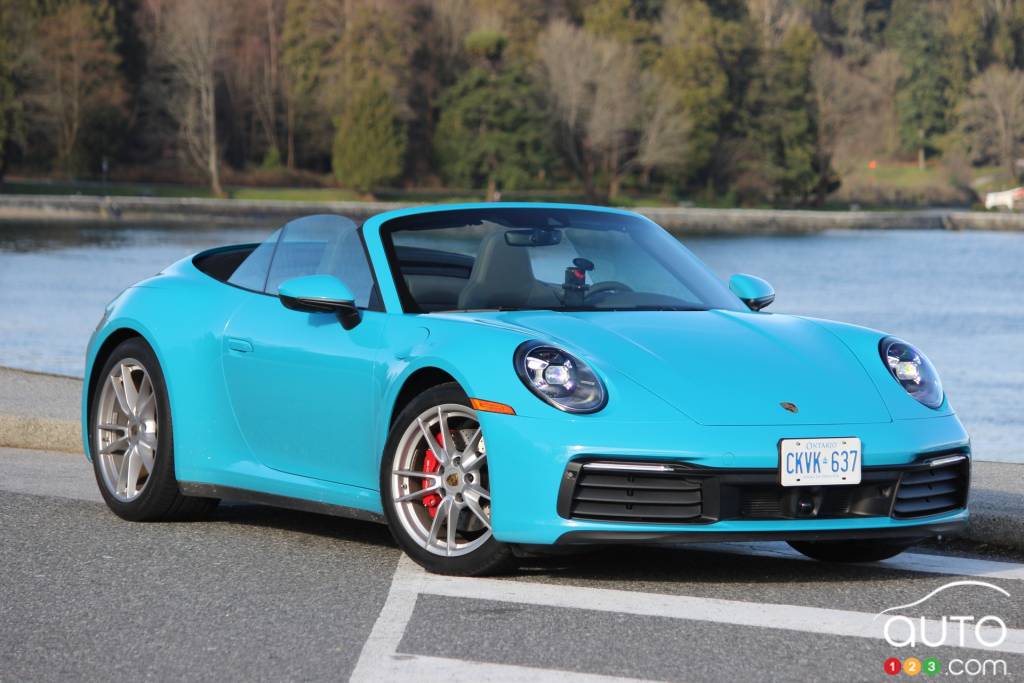 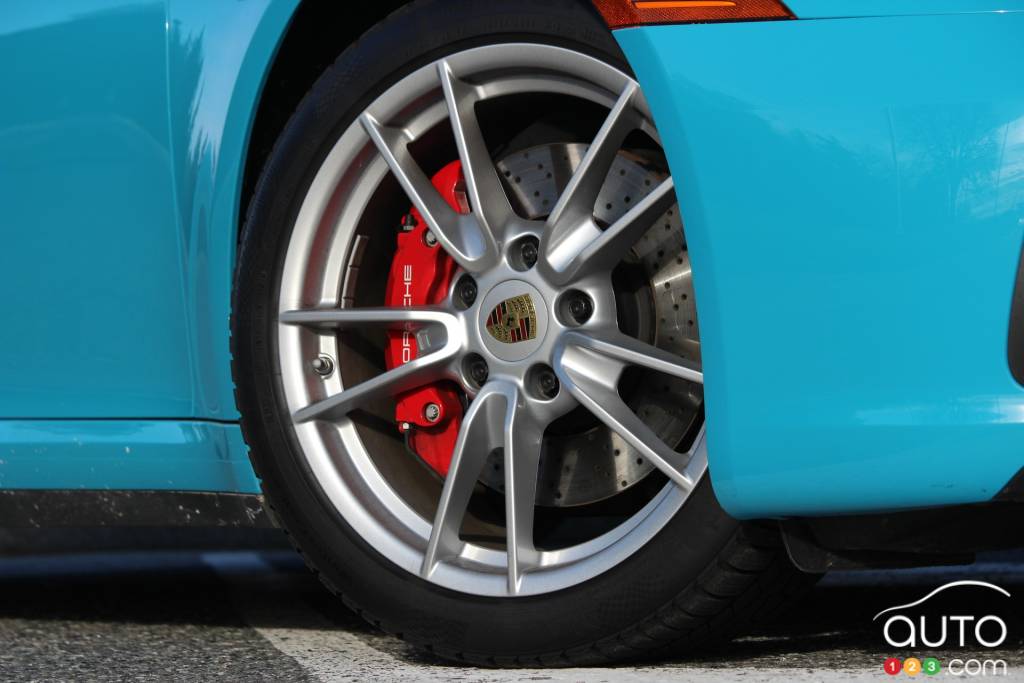 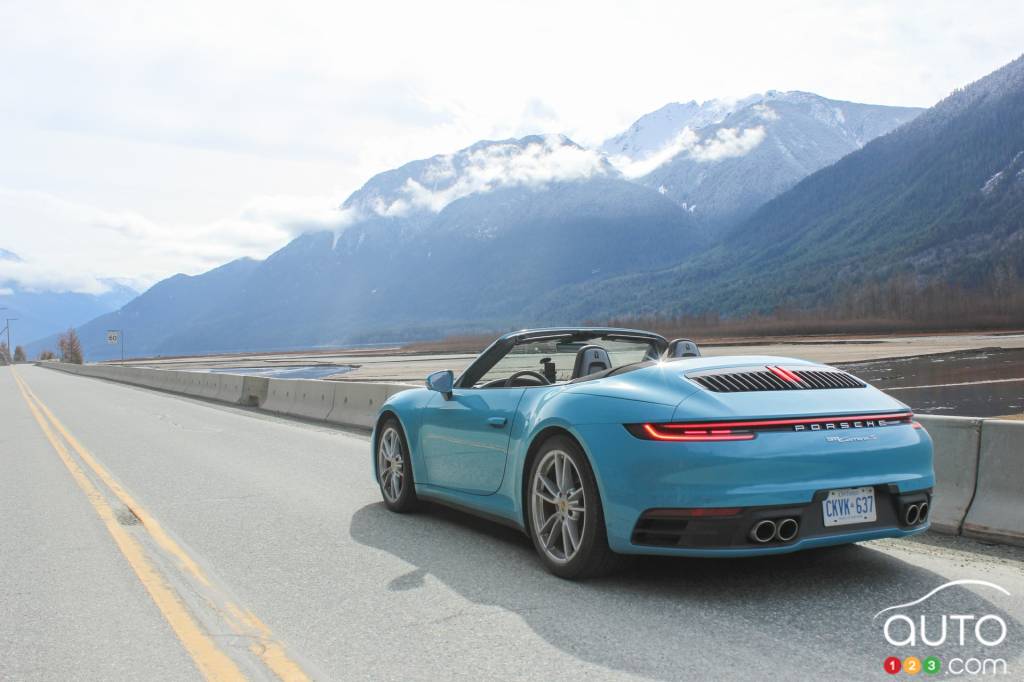 Six weeks after the reveal of the 911 coupe at the Los Angeles Auto Show, Porsche presents the cabriolet version. This edition reprises the main elements of ...

With the 2020 Porsche 911, its German creator proves once again that change can happen within continuity. Here’s our review of a car that is, from where we s...