Several parts of Canada are currently enjoying a nice stretch of Indian summer, and at Auto123 we’re celebrating by presenting our unofficial week of the convertible! And we start off with a stylish bang, with our review of the 2019 BMW M850i Cabriolet.

The time is past when choosing a convertible meant making a lot of compromises. Case in point, the big, stylish 2019 BMW M850i Cabriolet that joins the 8 Series coupe in BMW’s lineup.  While not everyone has the convertible-loving gene in them – for some, they’re considered more expensive and slower than coupes – no one can argue this Beemer lacks class. The 8 Series Coupe was stunning to begin with, and we set out to see if the Cabriolet was its equal.

Open-air luxury
The coupe version of the 8 Series was a highly sporty creature, but giving the model a removable top makes it even more striking, while keeping the luxury level just as high. The M50i Cabriolet as elegant styling, and for a convertible its top manages to produce an impressively quiet interior when in place. 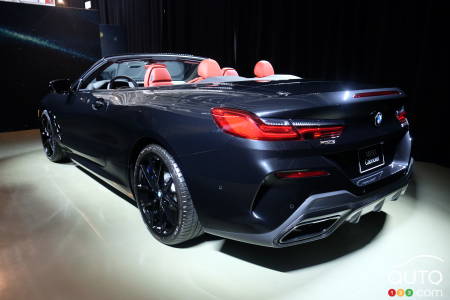 The interior
Nice as the exterior is to look at, getting behind the wheel is even more appealing. This is a high-end interior through and through, one that welcomes the driver in an environment as practical as it is sumptuous. Most of the elements found in the Coupe are here, the main addition being the vast open sky you can enjoy over your head. As for the engine sound, it’s as intoxicating as it is in the coupe.

The leather stitching on the seats gets contrasting stitching that matches the interior finishing. The sport seats we found to be wonderfully comfortable, making this cabriolet a perfect companion for warm-weather road trips. Being sport seats, they also offer good lateral support, and the headrests are fully integrated into the seatbacks and can be adjusted. There’s a semi-electric function that allows for moving the driver’s seat forward to make access to the rear seats easier.

For those who might harbour doubts about the soft top when the weather turns suddenly bad, you needn’t worry about getting drenched: push a button (hidden behind the glass gear shifter) and the roof lifts and closes completely within 15 seconds, and you can do it at a speed of up to 50 km/h. 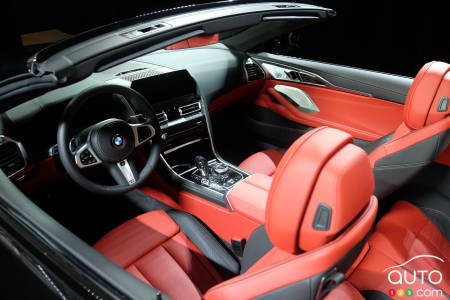 A wind deflector is also available, to be placed just behind the front seats when it’s not stored in the trunk. BMW paid attention to every detail with its 8 Series, including neck warmers and heated air pumped out of the headrest for when the weather turns a little colder. We drove the car with top down one evening when the temperature was at 18 degrees Celsius, and with the wind deflector in place and the windows up, there was no more wind in the cabin than in a regular car with its sunroof open. In that respect, hats off to BMW for its engineering and design skills.

About the back row: you can fit two people in to the rear bucket seats, but let’s be honest it’s better if they’re children when the trip is of a longer duration. The trunk is not exactly big either; it will take in weekend luggage, but don’t expect too much of the 8 Series Cabriolet when it comes to transporting things.

Tech and safety
In terms of the interior and its functions, BMW continues to offer three ways for the driver to manage those functions: physical buttons, gesture, and voice command. Like a luxury-hotel concierge, the BMW 850 Cabriolet is a versatile servant. Good examples are the gear shifter, the iDrive controller and the push-button start feature on the central console. 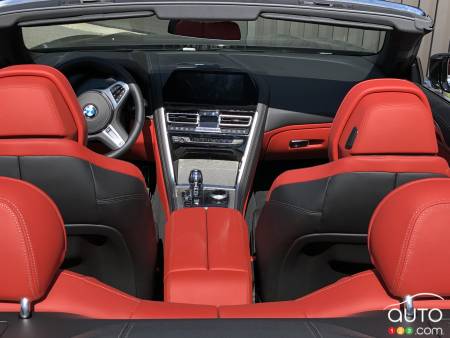 Safety is also a focus, no surprise there. BMW has put in a new protection system in place, so the convertible protects occupants with for example two aluminum bars behind the head rests in case of the vehicle overturning.

The powertrain
No surprise, the thing that makes the M850i Cabriolet go is the same as in the Coupe. The 4.4L twin-turbo V8 generates 523 hp and 553 lb-ft of torque.

On the road
Those numbers are impressive but they could also be cause for worry when you don’t have a hard roof over your head. There’s no need, however, because one of the most impressive aspects of this car is how reassuring a drive it provides despite being a soft top. Even on steep, curvy and bumpy roads, the M850i doesn’t panic or anywhere close to it. Hit a road imperfection in the middle of a tight corner? This car doesn’t flinch.

That said, do keep in mind that the tires on this thing aren’t crazy about tougher potholes like we’re apt to get in Canada, and if you happen on one of those infamous how-can-they-have-left-this-thing-here craters, your tires could well give up the ghost. 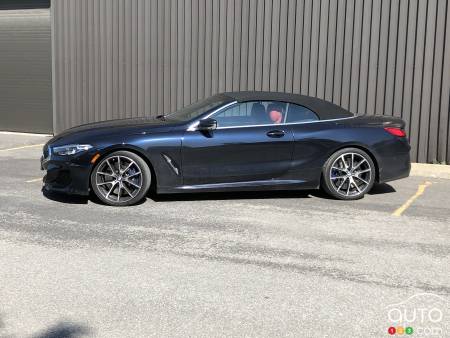 This sporty convertible certainly has raw power to burn, but it also knows how to be extremely refined. Within its segment, it’s hard to think of a more stable or well-balanced vehicle than the M850i.

Whether you opt for Normal or Sport mode, you get the aforementioned symphony of sound from the engine that greatly enhances the driving experience.

In Comfort mode, meanwhile, the drive closely approximates that of the Coupe. Acceleration is gentle and the steering is less brutally responsive than in Sport mode.

In terms of competition, the few main rivals of the BMW M850i include super-expensive beasts like the Mercedes Benz S-Class S Cabriolet or the Bentley Continental GT Roadster. These are fearsome rivals, except that the BMW 8 Series convertible, with its $132,000 starting price, is far less expensive

Undeniably, the BMW 850 Cabriolet offers a very high level of luxury to go with an impressively comfortable environment, making it a refined road-trip companion – as long as you pack lightly. For sure, more often than not this is a car for shorter, nice-weather road trips, but those trips will feel magnificent. 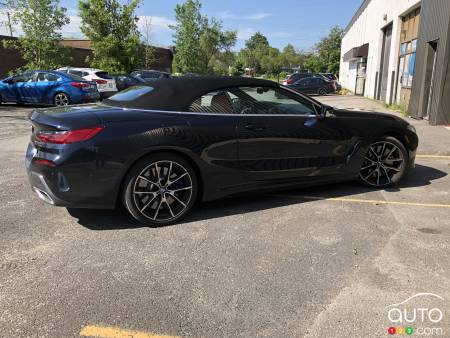 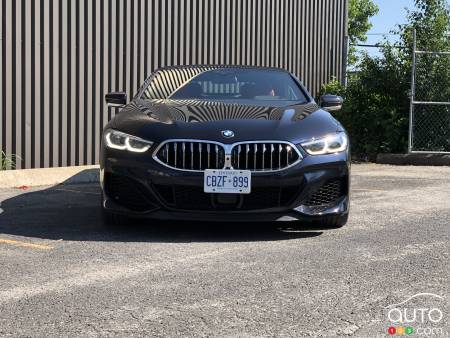 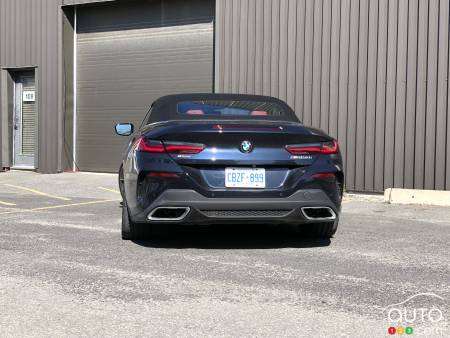 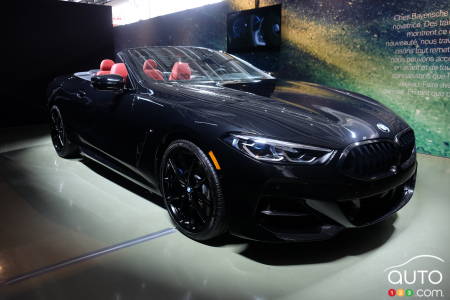 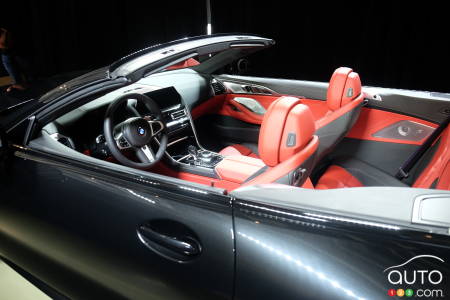 BMW has revealed details for the M variant of its new 8 Series, and it’s clear it will require self-discipline to drive the 617-hp car without getting into t...