Auto123 decides what 10 things you really want to know about the 2020 Porsche Cayenne Coupe.

Let's go back to the beginning and recall that in the eyes of many, at launch in 2003 the Porsche Cayenne was not widely considered to have a very bright future ahead of it. The brand's purists were upset to see an SUV arrive, let’s say, and so followed much pooh-poohing and tut-tutting. However, the quality of the product offered helped to gradually make the Cayenne an established member in good standing of the Porsche roster. Of course, the growing craze for SUVs has also helped its cause in the years since its introduction.

Thirteen years later, the Cayenne sells, and sells very well - like luxury hotcakes in fact. So much so that since last year, the Cayenne has also been available in a Coupe version. Now, coupe SUVs are in vogue and many of the automakers have been at it, curving down and stretching out the rooflines of their SUV models, with a mixed bag of results. Since 2019, the Cayenne itself has received a mild update, and Porsche used the occasion to introduce the Coupe version; we have to say it’s near the top of that mixed bag.

Sure, Porsche isn't inventing anything here, it’s merely joining a party in progress (peopled by BMW, Mercedes-Benz and Audi, with their X6, GLE and Q8 respectively). But while it earns no points for innovation, the German automaker does have the advantage of starting from an SUV model that’s proven itself as one of the best of its kind.

Which means that instead of having to create an all-new vehicle from scratch, Porsche had only to make a few modifications to the rear of the Cayenne. In fact the Coupe brings the model closer to the historical visual signature of Porsche, what with its plunging and rounded rear end typical of the iconic 911. The rear seats are also sportier, and Coupe buyers can choose between a two-seat rear row or three-seat bench seat version at no change in cost. 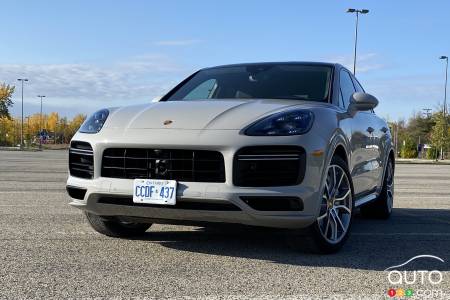 This Coupe version is available in all versions of the SUV version. However, Porsche will charge an additional fee of between $5,000 and $10,000, depending on the version, to access this variant instead of the regular Cayenne.

The available engines range from the "base" 340-hp 3.0L turbocharged V6 to the 670-hp hybrid powertrain. Of course, at Porsche, as with all manufacturers of premium cars, the higher you go up in the range, the more the prices skyrocket with a list of options that reaches higher than Jack’s beanstalk to the clouds. Starting at $87,700, the Cayenne Coupe is priced at $191,200 for the most complete, high-falutin’ version. That’s more than double the starting point for one and the same model.

But that's not the only difference between the two types of Cayenne available at dealerships. Here are 10 things we decided you really want to know about the Coupe version of the Porsche Cayenne:

The sloped roof permits both a standard roof spoiler above the rear window and a standard adaptive spoiler at the end of the window that rises 133 mm at speeds over 90 km/h. 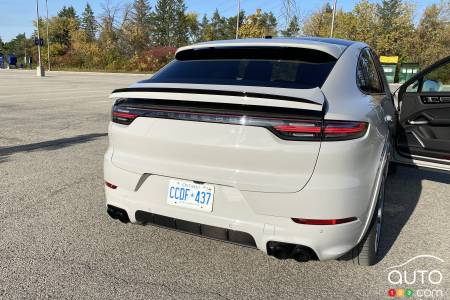 The Cayenne Coupe comes with an original glass roof. However, for an additional charge, you can opt it out for a carbon-fibre roof. Yes, you have that right: you now pay a supplement to remove a superb panoramic roof that comes standard. 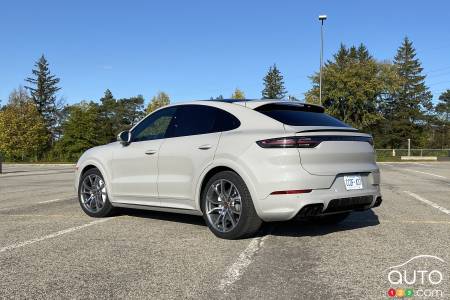