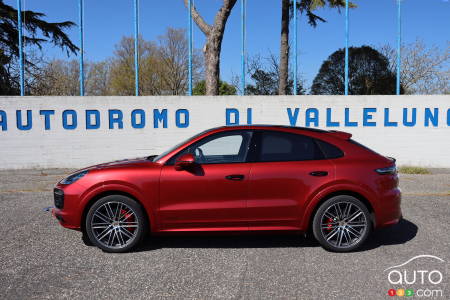 Auto123 gets in a first drive of the 2022 Porsche Cayenne GTS Coupé.

Rome, Italy - Now that Porsche has released a GTS (Gran Turismo Sport”) version of the Taycan EV sedan and Sport Turismo models, all of a sudden it doesn’t seem so strange that it earlier produced a GTS version of the Cayenne SUV.

In fact, I’ll do you one better: the Cayenne GTS, back in 2008, was actually a really significant vehicle in that it represented the re-birth of the GTS badge at Porsche for the modern era, after it had been sprinkled over the likes of the 904 and 924. That’s right, the Cayenne SUV received the designation before the Boxster or the 911.

Now here we are, 14 years after the original Cayenne GTS with the 2022 Porsche Cayenne GTS Coupé.

Ah, yes. The venerable four-door coupe that the Germans – and few others – can pretty much claim as an invention all their own. back in the day Mercedes released the CLS-Class, with BMW following suit with its 6 Series GT not long after. Coupe designation has now migrated past that, even, and into the crossover/SUV realm where the Cayenne is joined by the likes of the BMW X6 and Mercedes-Benz GLE Coupe.

While I question the reasoning behind these coupe-crossovers (you tend to lose back seat space and cargo room), of all of them, I have to say that the Cayenne probably makes the most sense as a coupe. 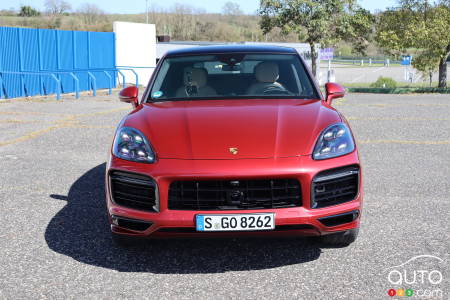 After all, Porsche is known for building sports cars first and foremost, while Mercedes and BMW – more so the former, it should be said – are better known for their large sedans and roadsters. And since Porsche is a sports car builder by trade, it makes sense that an SUV with that famous Stuttgart crest on the hood should work as a coupe.

It's also the best-looking of them all, in my book. It’s better proportioned than the X6 and GLE and manages to (mostly) avoid the issue those models have with regards to their rear fascia. The Cayanne Coupe’s two main rivals just sit too high and look as if they’ve got their rumps facing skyward even when they’re sitting on flat ground.

To combat this, Porsche has pulled the Cayenne’s rear bumper further down to the tarmac (and further still in GTS guise thanks to its specifically tuned suspension) and narrowed the full-length light bar so the whole thing just looks more streamlined and compact. It really doesn’t look too bad from this angle.

It comes as little surprise that when viewed in profile, the Coupé’s aggressive roofline towards the back provides a whole new look for the Cayenne and indeed, the only way you’d get the Coupé confused with the five-door model is if you looked at it straight on; otherwise, that roofline is extreme that you can see this Cayenne’s coupe-ness from any angle. In addition to the lower ride height, the GTS designation adds special wheels, side skirts and black trimwork around the grille and foglights, the headlamp lenses are smoked and you get blacked out badging as well. The Carmine Red tint in which my tester was finished is also right on the money, somehow making the Cayenne Coupé look even more compact than it does when finished in a black or silver. If it were me, however, I’d be opting for black wheels as well; that’s kind of a GTS staple over at Porsche and they will save you $1,850 on the wheels as the black items are standard fare for the GTS.