Athens, Greece - While the Evoque is one of the youngest vehicles in the Land Rover family, it's also the best-selling one. The first models appeared in 2012 and the lines had not really changed since. We are therefore entitled to the 2nd generation for 2020.

Velar-inspired
The ever-so-slightly feminine styling of the first version gives way to a squarer shape this time around. The vehicle’s shoulders are wider and the optional 21-inch wheels are bigger. Look at it and you see a baby Velar. There are the same sleek lines with recessed door handles that disappear into the bodywork to leave a perfectly smooth silhouette.

LED headlights offer a unique visual signature, as does the sloping roofline. For my money this is the prettiest small luxury SUV out there.

While the format stays very close to that of the old model, the 2020 version rides on a brand-new platform called PTA (Premium Transverse Architecture) that integrates a greater quantity of very high-tensile steel and aluminum for a lighter and stiffer chassis.

This new platform will serve other models in the Land Rover family. It’s no surprise then that it offers the possibility of accommodating hybrid models thanks to a dedicated space under the vehicle for batteries.

More opulence inside
Land Rover has definitely taken the technological turn with the Evoque. Like in the Velar, the interior counts three screens (depending on the model chosen). In the centre of the dashboard sit two 10-inch touchscreens. The top screen deals with radio, entertainment and navigation while the bottom one accesses the climate control, drive modes and other functions. You also have a customizable 12.3-inch screen facing the driver that allows to adjust displays as needed.

The cabin is more spacious for backseat passengers than the current version, but only just. However cargo space remains quite modest. To dress the interior, Land Rover favors the use of recyclable materials with a central panel covered with kvadrat wool, recycled plastic or eucalyptus fabric.

Finding what you need in the warren of menus on the screen is a bit laborious. You have to navigate a few options and double back in the menu to get to your ends. It’s just not that intuitive, and you’ll need a few weeks to get used to it.

You also have the option of a rearview mirror that turns into a camera to have an unobstructed view at the back. We didn’t much like this gadget in Cadillac’s recent models and we don’t like any more in this Range Rover. There’s something unnatural in the image that generates some unease. 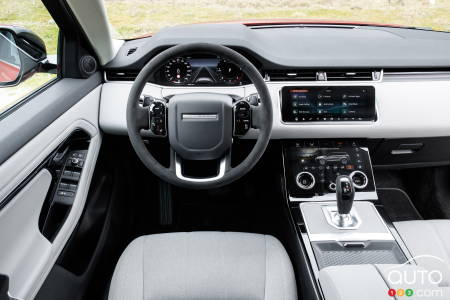 Still running on 4 cylinders
While Europe still gets the choice of a diesel-engine model, there will be two gas-fed versions in Canada and that’s it. The base P250 version features a 2.0L 4-cylinder turbo engine making 246 hp and 269 lb-ft of torque. The P300 by default offers the same mechanics, but adds a 48-volt battery that offers extra power without increasing fuel consumption. This Ingenium engine, which is available elsewhere in the Jaguar/Land Rover product offering, delivers 296 horsepower and 295 lb-ft of torque.

In all cases, the Evoque arrives with standard all-wheel drive and a 9-speed automatic transmission. The folks at Land Rover also admitted that a hybrid model equipped with a 3-cylinder engine would be coming to Europe by the end of the year. Let's hope it crosses the Atlantic.

On the road
Even with a weight at base that verges on 1,800 kg, the Evoque is very agile and quick to take off when you press the accelerator. It will do the 0-100 km/h in just seven seconds (half a second less with the P300).

Like all Land Rovers the Evoque has genuine off-road skills. Under its unassuming exteriors, Land Rover offers an all-wheel-drive system that automatically manages the power transfer on the front wheels under ideal conditions to AWD when things get worse. A new transfer case allows for, in two-wheel drive mode, the uncoupling of many moving parts. In addition, the rear differential applies more torque to the outside wheel when turning to enhance agility.

The Evoque also inherits the "Terrain Response 2" system from the Velar; this includes a multitude of functions depending on the type of terrain you’re going to attack with a low-speed cruise control that allows you to climb a steep hill alone, or the same system that enables descending an incline at a pre-set speed.

Part of our drive in Greece had us running the Evoque along a riverbed and on some pretty rough roads; the SUV didn’t break a sweat. In the cabin the sound insulation is notably better than in the previous generation. The standard rear strut and multi-link rear suspension offers a more comfortable and precise ride (even with our optional 21-inch optional tires) thanks to the new chassis which enables suppler settings without losing the sporty ride.

Among the small bugs, we could feel the 9-speed transmission hesitate when firmly pressing the accelerator. There’s a short dead moment before the engine kicks in.

Conclusion
Seductive and competent inside and out, the new 2020 Evoque has not only kept its mojo, but Land Rover has found a way to make it better. The  SUV offers sophisticated driving driving, exemplary road grip and a list of equipment to fit your particular budget. The models already at dealerships range from $47,000 for a P250 model to more than $52,000 for a P300 version. For that, you’ll definitely be the envy of your neighborhood.

Hesitant automatic transmission
Too heavy
Touchscreens are a little complicated 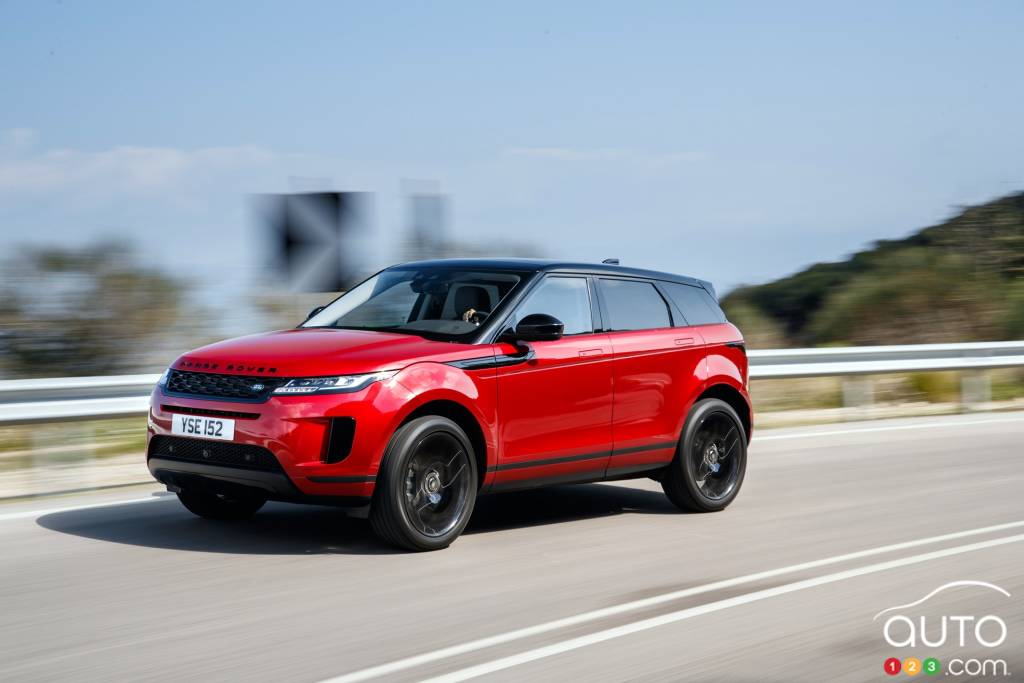 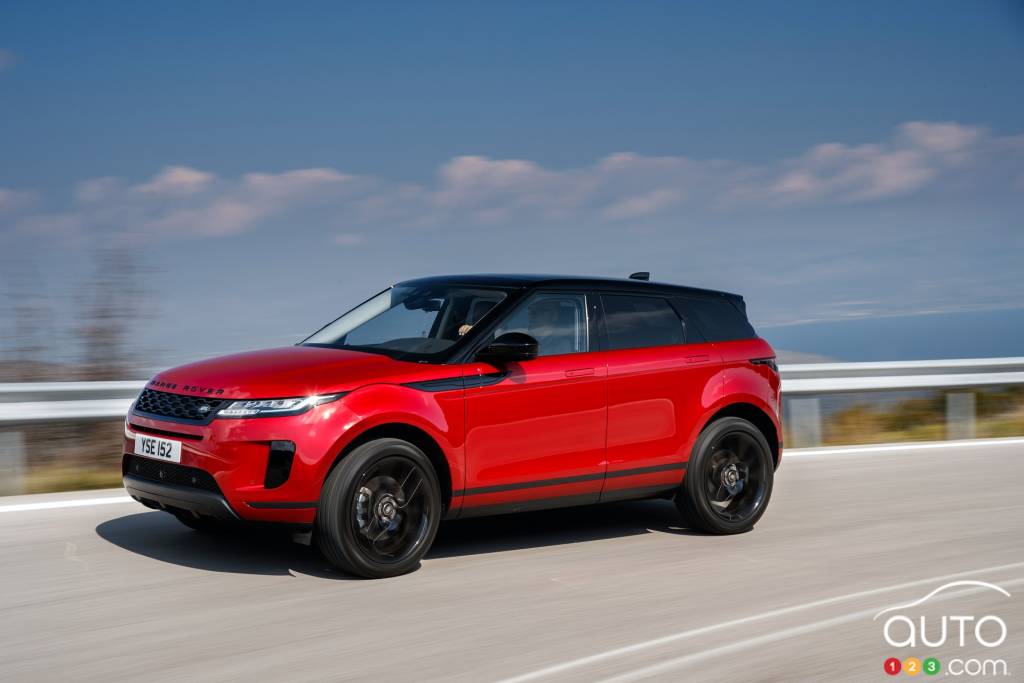 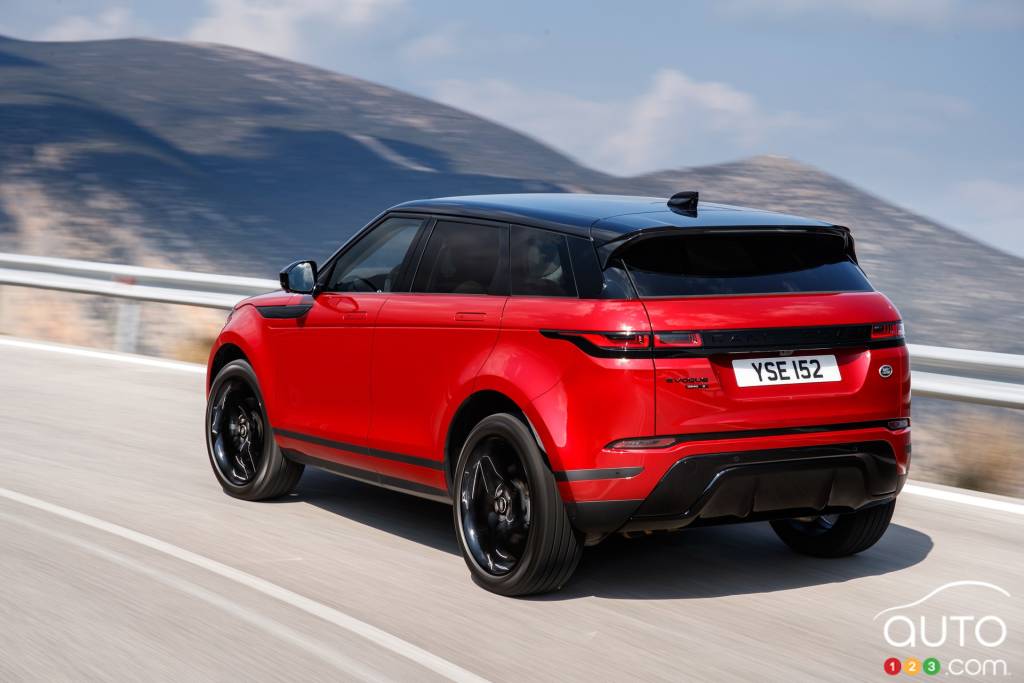 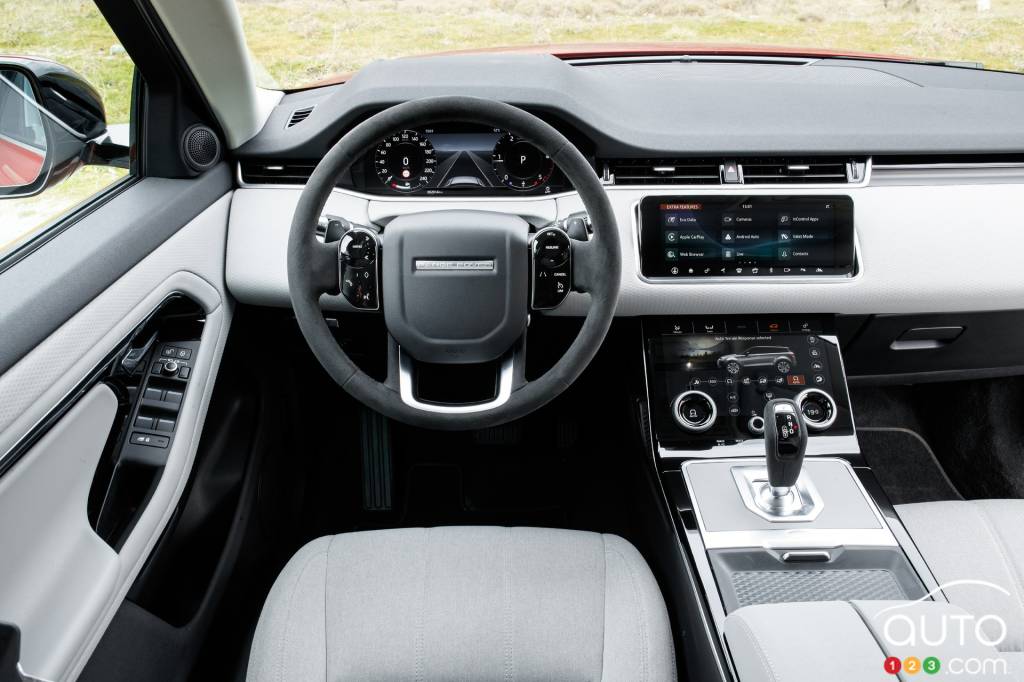 The new 2nd-generation Range Rover Evoque was unveiled at a special event put on by Land Rover in London, England. Design-wise the British brand has moved ca...

After an absence of more than 20 years, Land Rover’s Defender is coming back to the North American market. The British automaker confirmed the news, saying i...

The new Land Rover Defender is awaited with bated breath by fans of the brand, but the novel coronavirus doesn’t care. The company is working hard to catch u...