If anyone had ever suggested to David Brown, the owner of Aston Martin and the overseer of its post-World War II revival, that he make a utility vehicle, they would probably have been scalped on the spot.

Aston Martin was and always has been a car brand. A great car brand, maker of classics from the DB2 to the DB11, from the Lagonda and DBS to the Vantage and Vanquish. Creator of the mythical DB5, made famous by Agent 007.

However, times change and when we started to see SUVs first from Porsche, but also more recently from Bentley, Maserati, Rolls-Royce and Lamborghini, it was probably only a matter of time before Aston Martin got in the game, purist gnashing of teeth be darned.

And that time has arrived. It comes in the form of the DBX, which we had the opportunity to test drive for 24 hours thanks to the collaboration of the Les Moteurs Decarie dealership in Montreal. Here's what our quick contact revealed about the latest entry in the luxury SUV sector. 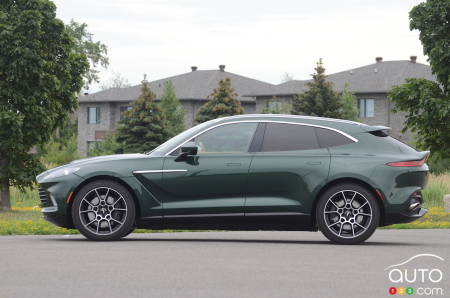 NASCAR
What, you ask, do NASCAR and the Aston Martin DBX have in common? Well I'll tell you, there’s just one thing, but it’s striking. More on that in a bit.

Design
The DBX is an eye-catcher, that's for sure. The front grille, for those familiar with the brand, is true to tradition for Aston. And it's gaping on this DBX, ready to swallow squadrons of mosquitoes. Like it or not, Aston Martin is beholden to it, condemned to stick with it.

At the rear, the designers were able to let loose more, even as they were careful to give it a brand-specific signature. And actually, this is where most folks’ gazes settled during my time with the vehicle.

When you look at the whole, you notice some interesting touches, for example the manufacturer's name on the brake calipers, the integration of the door handles in the bodywork and that rear section, which integrates a spoiler through the design of the light strip that spans the DBX’s width. It’s a nice nod to the sporty Vantage.

But the most striking thing is the profile of the model, especially when the air suspension is lowered. 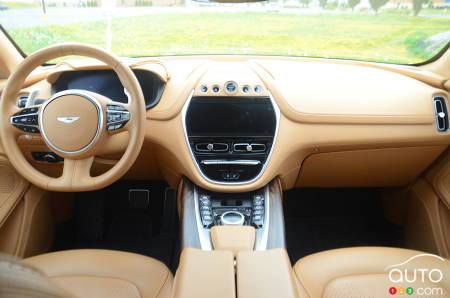 On board
Things won’t be ordinary when you settle inside a cabin appointed in handcrafted materials. They better not be. The richness of the leathers and the details that enhance them are striking, and the quality is obvious everywhere you look and whatever you touch. You might even find yourself admiring the carpeting. The design of the dashboard, meanwhile, is marked by a symmetry that’s pretty seductive.

In the driver's seat, you can quickly find the driving position that suits you, though the adjustment possibilities are not abundant. While comfort and support are excellent, we would like to have more options to really feel right in the saddle. The ergonomics, overall, are pretty flawless. My right hand, in particular, quickly found and memorized the location of the buttons that allow you to switch the vehicle from one drive mode to another.

Technologically, we were surprised to discover an outdated multimedia system. This is due to the long gestation of the model in development. It took ages from the time of the first sketches to production, so when it was designed, Mercedes-Benz’ old system was the choice. Which means, no touchscreen. Also, the Android Auto application is conspicuous by its absence and connecting to Apple CarPlay requires a wire. Sacrilege! We'll get an update eventually, Aston Martin promises.

Of course, this small drawback won't make DBX buyers turn their backs. The overall excellence of the model simply counts for far more. 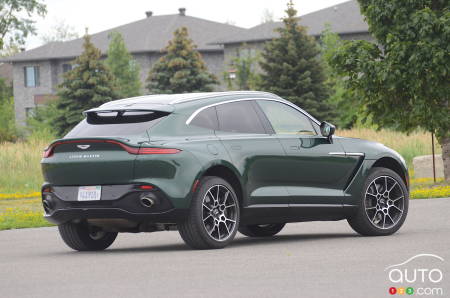 Mercedes-Benz
About Mercedes-Benz. The German firm entered a partnership with the British company in 2013. Its stake was 5 percent at first, but that dropped to 2.6 percent in 2018 after Aston Martin's IPO. In October 2020, big announcement: the German giant's stake would gradually increase to hit 20 percent in 2023.

Part of what the relationship initially entailed was Aston accessing the twin-turbocharged 4.0L V8 developed by the AMG division. Now, over the next few years, the British automaker will have access to a wider range of Mercedes components such as conventional, hybrid and fully electric powertrains, as well as electric platforms. All of these will be used with the introduction of new models and variants through 2027.

And all of this brings us to the very existence of the DBX. If Aston Martin were swimming in money, it wouldn't need a Mercedes-Benz for a partner, and it wouldn’t need an SUV. But it’s not cash-rich, and because demand for SUVs is high, and because the profit margin they deliver is high, the very future of the brand depended on developing an SUV.

We can just hope Aston Martin didn’t wait to long to act. Probably it did not, if the first six months of 2021 are any indication. The new DBX’s performance has helped the brand increase its sales by 224 percent this year through the end of June. Just over half of Aston Martin’s sales were DBX SUVs. 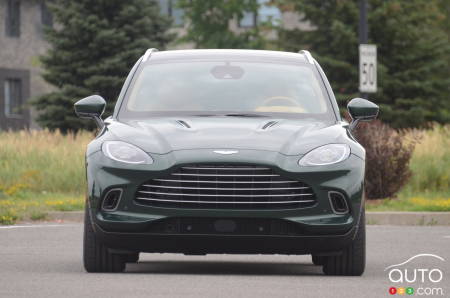 Behind the wheel
Finally, our test wouldn't be complete without discussing the experience this thing provides when you take it out on the road. And into traffic, which is what we hit immediately on leaving the dealership, in the very heart of Montreal. The first few kilometres allowed us to measure the quality of the suspension, fairly able to eliminate most potholes, and of the soundproofing level. Most of the aggressive sounds of city life were successfully muted.

Once away from traffic, however, the only sound that matters is the one produced by the mechanics and the exhaust system. And this is where my NASCAR reference comes into play.

Between 2006 and 2010, I had the opportunity to cover a few NASCAR events in the United States and in Montreal when the Nationwide Series was on. The sound of a NASCAR car is unique, guttural. It awakens the senses, acts on the hair and raises the heart rate. Well for the first time in my line of work, my ear recognized that sound with the DBX. It happened with every acceleration, especially in the high RPMs with the foot deep in the throttle, but also when downshifting to lower speeds.

Sheer joy. There’s no other way to put it. 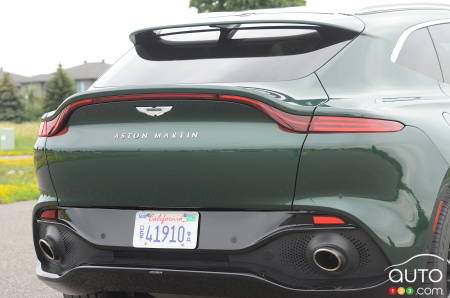 Sheer joy is not, however, the way to describe what the drive delivers. Despite a chassis that gets everything possible to make it feel like a car (adaptive suspension, limited-slip rear differential and active anti-roll bars), you have to deal with an imposing weight (2,245 kg, or 4,949 lb) and brakes that are stable enough but could be more biting.

At the wheel, the combined work of the V8's 542 hp and 516 lb-ft of torque and the AMG's 9-speed automatic transmission will have you sticking into your seat, but again, you're dragging a whole lot of weight. That translates into a 0-100 km/h time of 4.5 seconds, and if we’re going to get into comparisons, others do better.

Now, that doesn't matter much here, because it’s real easy to just let yourself be transported by the sounds and the emotion. And that's the main argument in favour of this DBX, because it offers an experience, much more than a simple means of transportation. 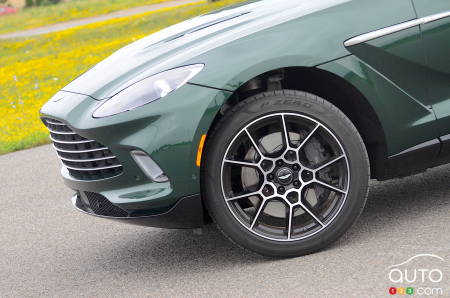 Conclusion
And so Aston Martin has made an SUV. Deal with it. Those who are shocked will have to get used to it, because the brand's future depends on its success in this sector, like it or not. Times change, like the price of beer at the Bell Centre, like the climate, like mentalities, like everything, finally. Those who adapt go through and those who refuse to do so end up disappearing.

That's the way it is. 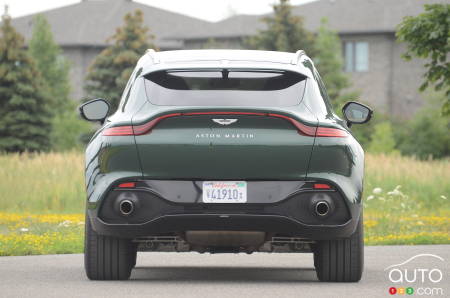 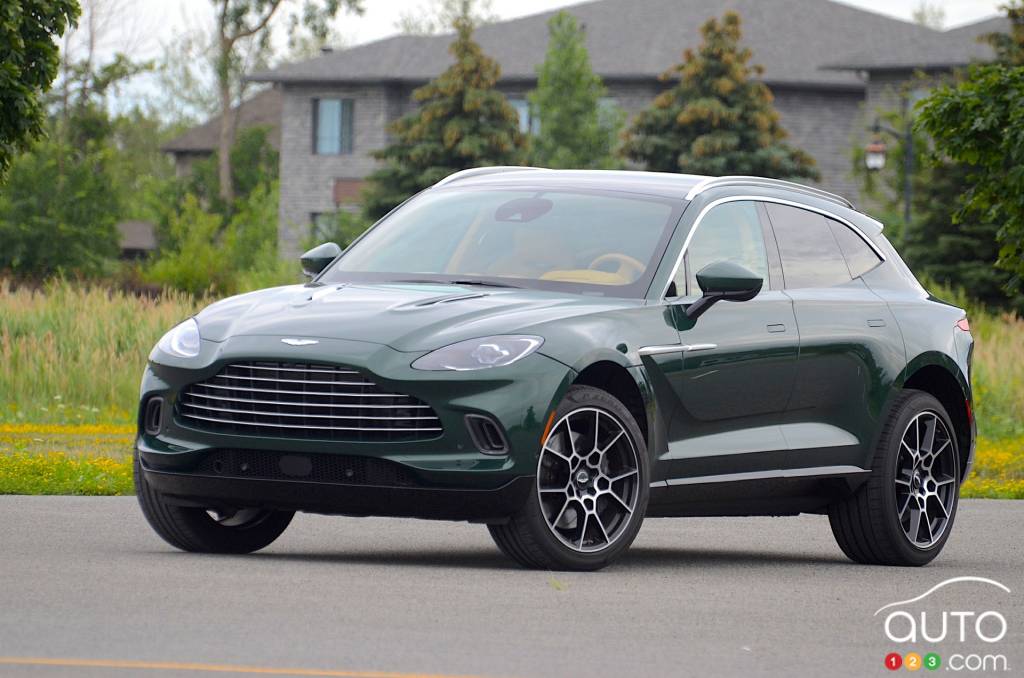 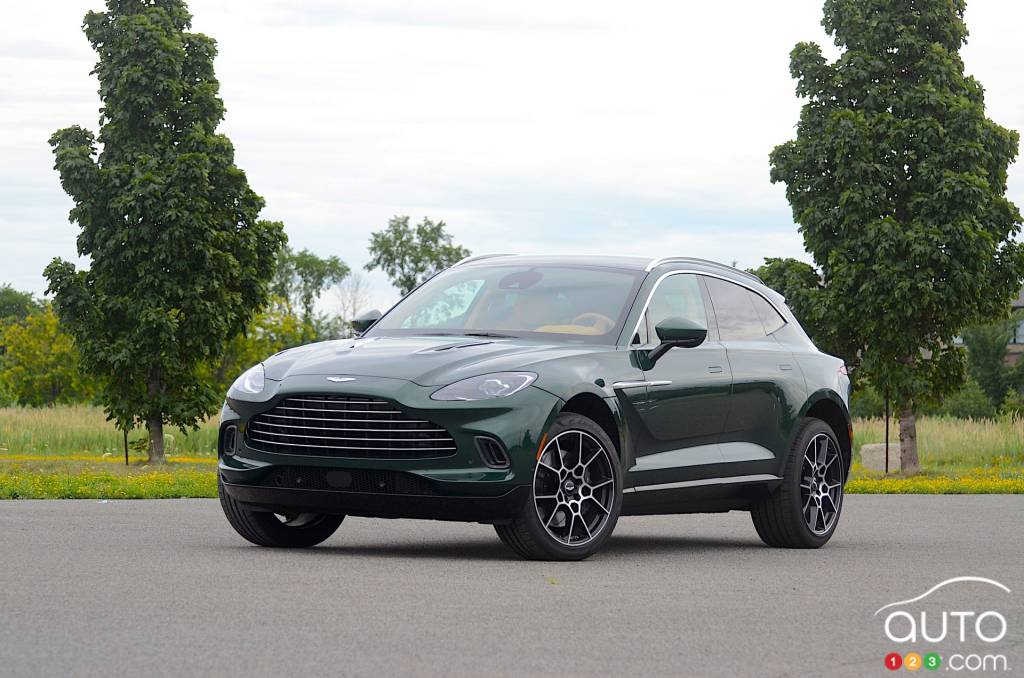 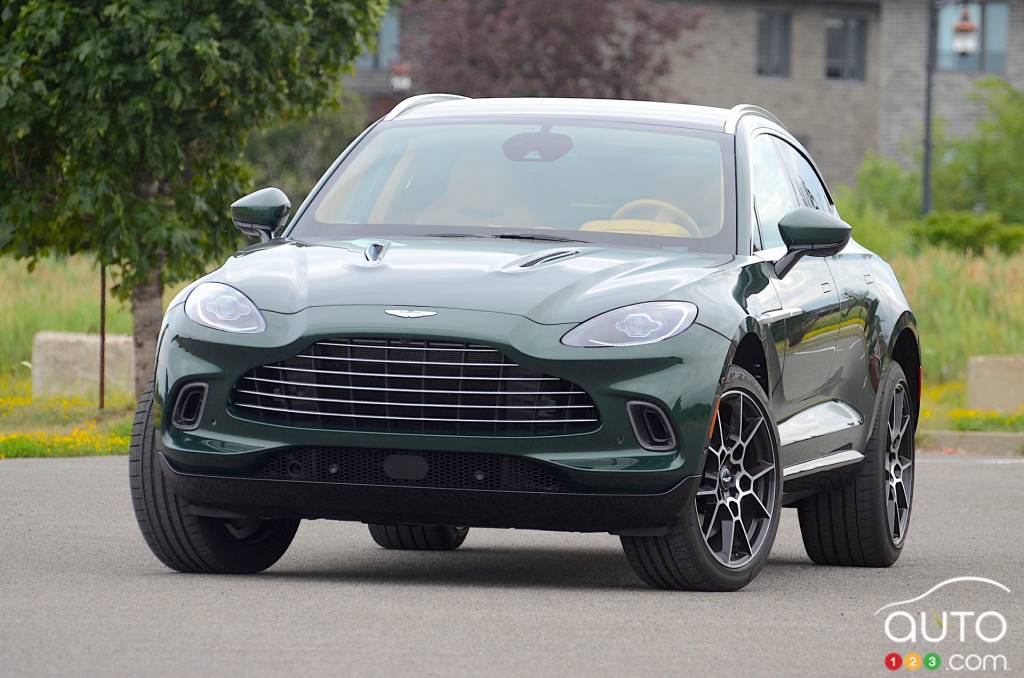 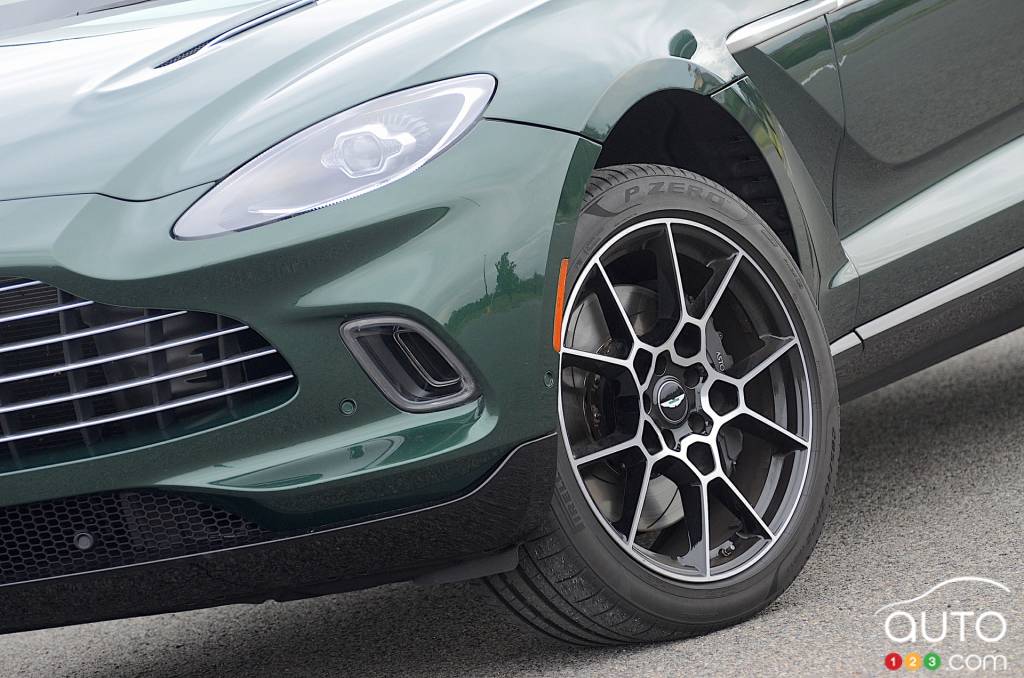 DBX Boosts Aston Martin’s YTD Sales by a Whopping 224 Per...

The DBX SUV, the first utility vehicle in Aston Martin's history, has propelled the luxury brand's sales since the beginning of the year. Propelled? More lik...

Aston Martin DBX: A First View of the Interior of the SUV

Aston Martin has shown a first image of the interior of the Aston Martin DBX. The company also announced a starting price of nearly $190,000 USD for its firs...