If the midsize truck category is so popular right now, it's partly due to the introduction of the Chevrolet Colorado in 2015, alongside its cousin the GMC Canyon; the GM one-two punch seriously reinvigorated the midsize pickup segment. As for this particular version I recently test-drove, the Chevrolet Colorado ZR2, it is definitely aimed at customers looking for a vehicle that can go almost anywhere.

The ZR2 variant has been with us since the 2017 model-year, and in its creation Chevrolet clearly took inspiration from – and was challenged by - another pickup designed for off-roading: the Ford F-150 Raptor. Now, it's true that the Raptor is a hulking beast that overshadows the “little” Chevy, but don't go thinking that the ZR2 isn't capable of keeping up with the big bad Ford on rough terrain. Far from it. The Colorado might not have the same level of brute power to play with, but it has all the tools to take on trouble and come out the winner.

This year, the Colorado ZR2 has received a mid-cycle overhaul, characterized primarily by a rather aggressive reimagining of the nose up front.

The model as tested runs $53,788, a little heftier than the regular ZR2 since the optional Midnight Package and performance exhaust system are included here.

Midnight Edition
Increasingly popular in the industry, the black-on-black theme – hence the Midnight appellation - theme is also among the options available with the regular Chevrolet Colorado pickup. Even the Z71 variant can be dressed in a similar package. The optional Midnight Package for the ZR2 – cost: $4,015 - features black bodywork and exclusive 17-inch wheels in glossy black. By the way, even the spare tire is a 17-inch wheel. As for the off-road sport bar topped with auxiliary lighting, it particularly changes the pickup's silhouette.

It's up to you to decide if you like this frankly gloomy atmosphere. If not, you can always opt for the optional Twilight Package, which retains the options of the Midnight Package without the black body colour. The price is also the same, so it will come to down to how cheery or not you want your truck to be.

Among the other exterior options worth mentioning, the performance exhaust system is certainly something to consider if engine sound is one of your priorities. In this case, the less-restrictive piping adds $1,775 to the price tag.

The most comfortable Colorado
Like other off-road-ready pickups, the Colorado has variant-specific shocks, and they come from a local company, Multimatic. This Ontario-based firm developed these shocks with spool valves, which are largely responsible for the improved comfort on board the truck... and the ability to withstand a jump when the driver pushes the machine over the edge. Whether you're driving on a high-speed gravel road, more-challenging terrain or even just a weathered Canadian road, the Colorado ZR2 is a gentler option for passengers' backs than the regular Colorado.

Note that in addition to the shocks, the truck benefits from a ground clearance elevated by two inches, while the suspension arms are made of cast iron. The electronically locked front and rear differentials are also a plus for passing through obstacles, as are the underbody protectors on the sides of the vehicle. Under the vehicle, a protective plate covers the front part of the underbody, while a second one protects the transfer case.

As for those widened fenders, they're not just there to impress folks. The increased suspension travel, wider tracks and those off-road tires forced the engineers to add some muscle to this body.

Nice, but...
I admit it, I like the Colorado ZR2! First of all, just take a look at it. That muscular appearance is certainly a positive factor. An off-road pickup has to be attractive and look the part, especially since the category seems to grow a new member every quarter.

Its powertrain is also very well suited to the truck's chassis. The 3.6L V6 isn't a monster of raw power, but in this application - with the exhaust that lets out a more-raucous sound as a bonus - it has no reason to feel inferior versus the other engines at work in the category. The optional 4-cylinder turbodiesel is certainly an interesting alternative for technology lovers, but the $6,000-plus price tag is hard to swallow. The 8-speed automatic transmission also does an excellent job, by the way.

And despite the more “flexible” suspension, the Colorado ZR2 doesn't suffer from “steering-itis”, that facet of a 4x4 that forces its driver to constantly make corrections to the steering wheel on the highway. OK, this Chevy pickup is certainly not surgical on the level of a Camaro, but it is much less allergic to the highway than a Jeep Gladiator Rubicon, for example.

Where the ZR2 doesn't do much better than its off-roading rivals is in terms of actual, physical access. Truth is that to get behind the wheel, you have to reach up to and hold the wheel and jump onto the seat. The lack of a handle on the A-pillar or even the B-pillar makes getting on board a little difficult.

Another consideration is fuel consumption. Indeed, the ground clearance, the off-road tires and the more-playful character of the ZR2 inevitably results in higher gas bills for owners. We're not talking about a huge difference here, but according to EnerGuide, the average for a regular V6-powered Colorado is 12.1L/100 km; in comparison, the ZR2 averages 14.1L/100 km.

The last word
Despite the drawbacks, which frankly all fall into the category of the acceptable trade-offs you make when going for one of these specialized variants, the Chevrolet Colorado ZR2 is still, in my opinion, one of the top choices for the pickup truck-loving outdoors enthusiast. It's comfortable on a daily basis, its build quality is still up to snuff and the powertrain is proven. What more can we say? 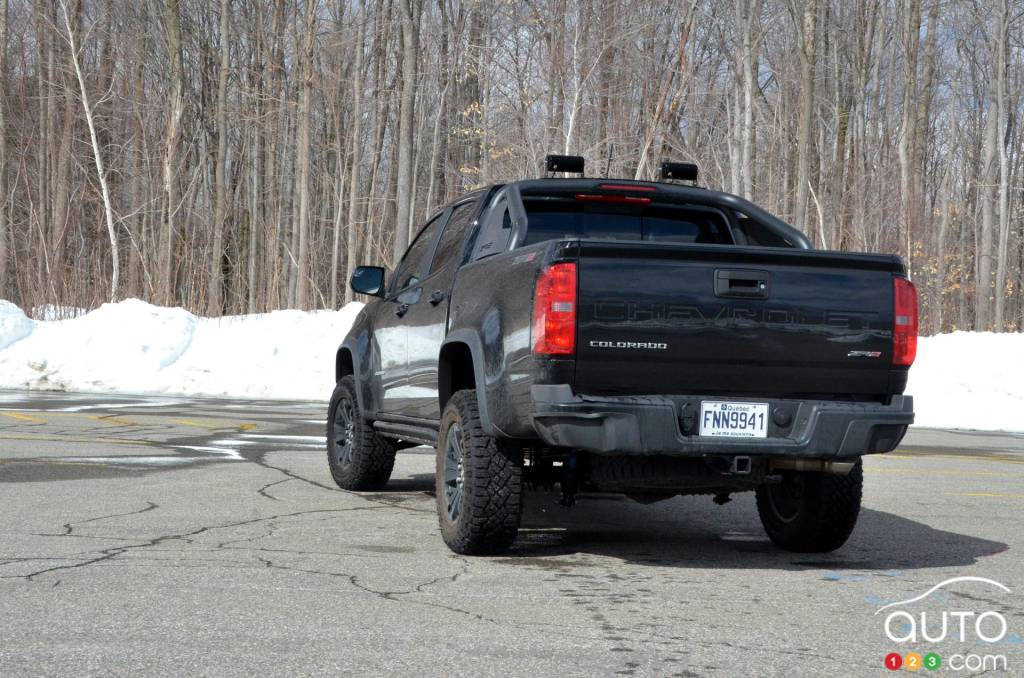 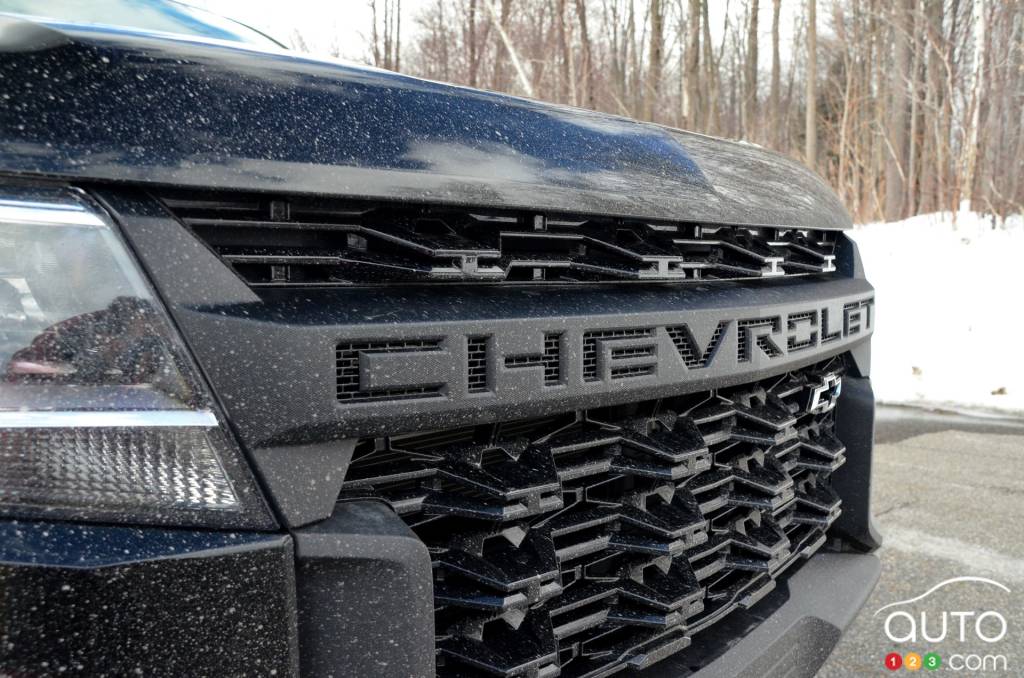 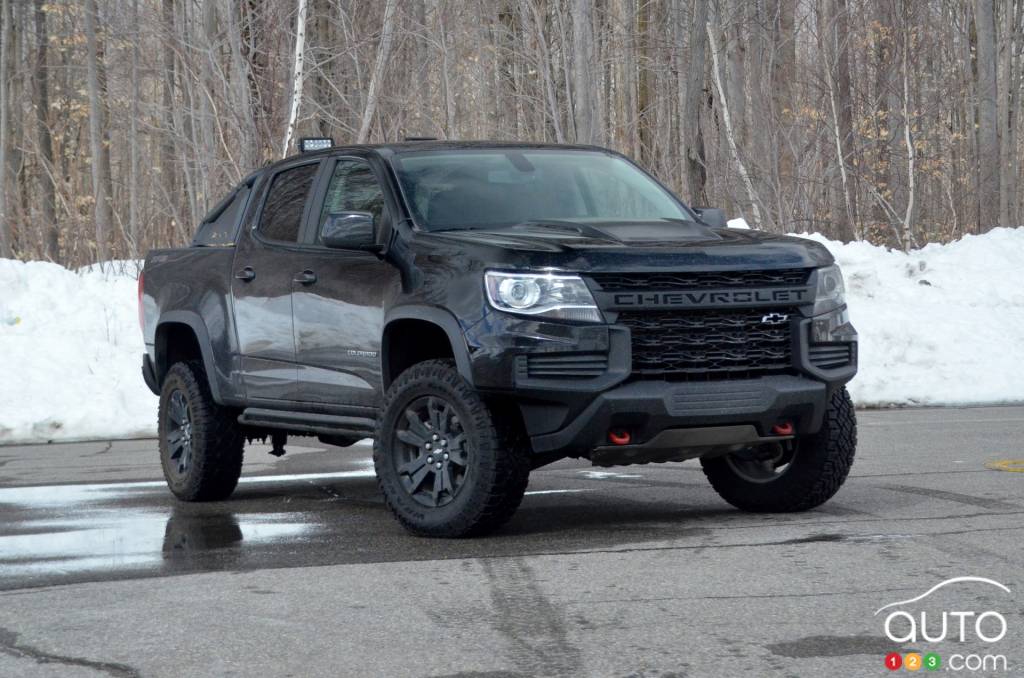 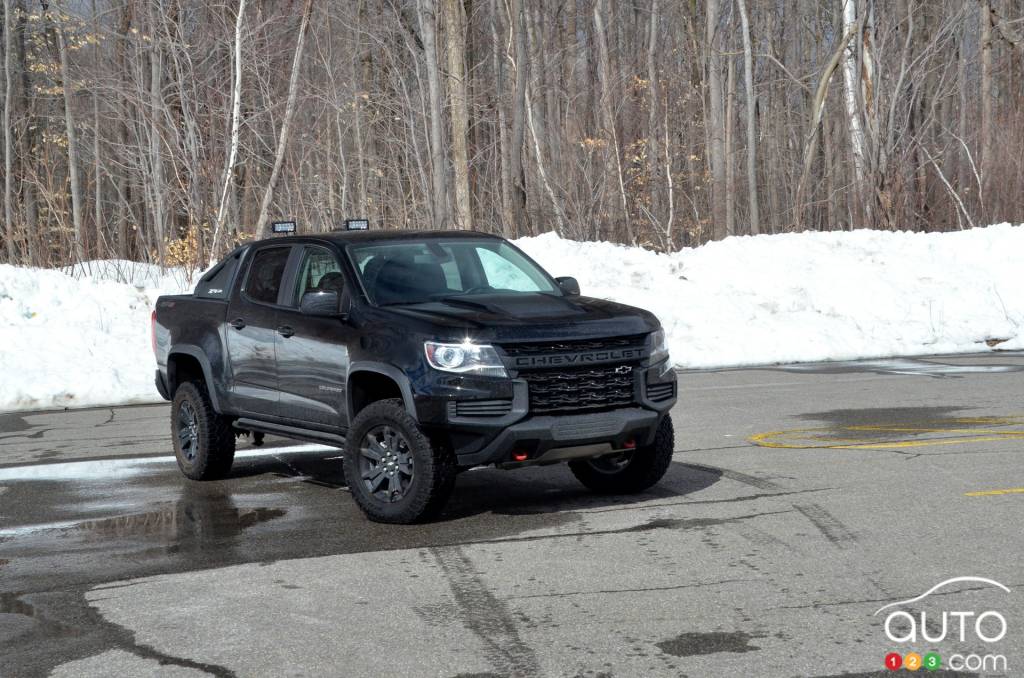 Revisions for the 2021 Chevrolet Colorado Revealed

Chevrolet's Colorado truck is getting a few adjustments for 2021, and the company has dutifully released the first images. On tap are changes to the front gr...

11 of the Safest Buys on the Automotive Market in 2021

Auto123.com took a look at 11 mass-market vehicle categories and pulled out the top best buys from each for 2021. Want reliability? Value? Here you go.