How do you go about revising a vehicle that has led the country in sales for over 50 years? Very carefully, for sure, but also by bringing innovations to keep it ahead of the Joneses. A few years ago you’D hear a lot of talk about Chrysler creating a host of accessories for its vehicles; now Ford shows it can play that game too. Especially if we take a close look at what the all-new, completely redesigned F-150 offers for 2021.

Redesigned you said? Well yes, but it’s still instantly recognizable. This is indeed what Ford's big brains wanted because the market studies were clear: “Revise our F-150 but don't change it!”.

And revisions there are. According to Ford, no part of the 2021 F-150's body would fit on a previous model. And that body, remember, is all of aluminum!

What hasn't changed is the F-150's imposing catalog of mix-and-match combinations, with five wheelbase lengths, three cab types, three body lengths, six different finishes (not including the spectacular Raptor version), six engines (if you add the new EcoBoost 3.5 hybrid combination), etc. On the other hand, there is only one transmission, the 10-speed automatic. And of course, you can go for rear-wheel drive only or four-wheel drive on command.

Add to that a completely redesigned interior. Recall that the most recent F-150 was already five years old, which can be a long time in a field as competitive as that of the pickup truck. Ford designers had to go back to the drawing board and redesign the dashboard to accept an optional 12-inch screen and new accessory layouts.

Eventually, Ford of Canada will make several F-150 configurations available, but first, why not talk about what may be the most popular version on the market, a 4-door, short-bed crew-cab F-150 powered by the popular twin-turbocharged EcoBoost V6 with the 10-speed automatic transmission and two-speed transfer case.

To make it more interesting, let's add the Platinum trim. It's not the most high-falutin’ F-150 (there's the Limited trim for those who want even more luxury), but for drivers who will be using their F-150 for long trips, it’s the ideal choice.

Approaching the vehicle, you’re greeted by nifty lighting as the retractable running boards automatically deploy (they can also be opened or closed by foot via a switch on the lip). Once behind the wheel, the driver can make one of several adjustments to the steering wheel, seat and even pedals.

The interior
As soon as the engine is started (via the push of a button), the instrument cluster lights up and on it you can get the speedometer and engine tachometer to display in very large numbers, eliminating the need for a head-up display in the windshield.

The huge 12-inch screen in our test vehicle is used for the radio (with Bang and Olufsen sound system) and for the navigation system or, more importantly, for the many features now available on an F-150. At this level, it would take a novelette to explain everything that's on the screen, including the driving aids and the multiple views of the vehicle thanks to Ford's Co-Pilot 360 application, which can be found in the new, much more advanced SYNC 4 package. I liked the possibility of activating the front and rear cameras of the vehicle, especially for parking.

The huge console in the centre of the cabin includes a large storage area and useful cup holders. There's also the shifter which, in the case of this Platinum, folds into the console with the push of a button, allowing the console opening panels to be folded flat, forming a work table or, in my case, a dining table!

Another interesting accessory is that the luxury version of this F-150 has front seats that recline backwards 180 degrees allowing you to sleep in them.

Besides that, do I have to tell you how spacious the interior is, including the rear passenger compartment? Also, there are additional storage spaces hidden under the rear seats (which can be folded down for easy transport of valuables).

The bed
Normally, this part of a pickup truck doesn't warrant a whole paragraph to describe it; suffice to know its its depth and load capacity. However, in the case of this Ford F-150 Platinum, it's a different story. Obviously, the floor is flat and there’s enough room between the wheel wells to carry the yardstick 4 x 8 panel flat. There are also tie-down hooks.

But just as Ford's designers looked to make life easier for travelers with an interior that offers so many comforts and amenities, they also thought of the do-it-yourselfers and especially the contractors by adding some useful accessories to the rear section. For one the Platinum's rear panel can be opened via remote control; for two, I noted that it has two rulers printed on it, one in metric and the other in English, a cup holder, a flat pencil holder to prevent them from rolling out of the panel, notches to attach retention clips and even a bottle opener!

On the left side of the bed, there are power outlets, which work with the engine running. Very practical for using a saw or watching a big TV (when camping). Available with all models, this system is 2.0 kWh. With the hybrid version of the F-150, this Pro Power system will be able to make 2.4 kWh or 7.2 kWh. I promise myself a whole series of tests of various devices when an F-150 Hybrid so equipped becomes available.

A whole range of mechanical options
As mentioned above, the new F-150 is available with one of six engines. The smallest is the 3.3L V6, which is aimed at commercial and industrial users. Next is the 2.7L EcoBoost V6, which is a favorite of F-150 owners with simpler needs. Then there's the 3.0L PowerStroke turbodiesel V6 that should appeal to those who need to use their F-150 intensively. The twin-turbocharged 3.5L EcoBoost V6 is the one that powered my test vehicle.

For 2021, it gains 25 hp to deliver 400 with 500 lb-ft of torque. It comes with the electric motor for the hybrid version. With the auto transmission, the 3.5L EcoBoost can pull trailers with a maximum of 14,000 lb (with the rear-wheel drive version), making it the champion of its class. Quite impressive. My F-150 Platinum had a bed capacity of over 2000 lb.

By the way, F-150s with a towing package come with a feature that makes backing up with a trailer easier. All you have to do is apply the checkerboard decals to the trailer arrow and turn on the system, which is connected to a control on the dashboard. When you put the vehicle in reverse, the rearview camera sends the image to the screen and the driver only has to steer the trailer and the truck by turning the rotary control without touching the steering wheel.

Finally, don't forget that the 5.0L V8 remains in the catalog, which reassures drivers who still think that a turbocharged engine is fragile.

A note here on the suspension. Ford insists on keeping the F-150's rear-axle leaf spring suspension, while competitors like the Ram have switched to multi-link with coil springs, which makes the Ram a more comfortable vehicle. Our test F-150 was equipped with Hankook i*Pike RW-11 winter tires.

On the road
More than one vehicle enthusiast buys an F-150 not only for its practicality, but also because it's an excellent travel companion. Fuel consumption is relatively modest and its performance is amazing. The F-150 is not a race car or a sports car. But knowing that it can race from a stop to 100 km/h in less than seven seconds is reassuring... as is its passing ability.

Once on the highway, the ride is smooth and comfortable despite the fact that the rear suspension means that some road imperfections can cause the truck to react, though without much consequence. The steering is neither loose nor all that precise. It's ideal for long trips.

Of course, visibility is excellent and, despite its imposing size, the F-150 is so easy to drive. We like the large mirrors in addition to the adaptive cruise control and the CoPilot 360 driver assistance system, which could eventually be modified to allow for automated driving.

The situation gets a little more complicated in urban conditions. The vehicle, as you might expect, is bulky, and even more so when it comes to parking. This is where the front and rear cameras come in handy. It's also possible to order a parking assistance system to help the driver place the vehicle correctly or even help him get out of a tight spot.

With its FX4 equipment, it's also an all-terrain vehicle... to a point. We've actually tried it several times in the past, and offer thanks for the protective plates underneath the vulnerable mechanical components. Switching between low and high range 4x4s is as simple as turning a rotary control on the dashboard. Contractors who need to get to muddy job sites will appreciate the FX4's off-road capabilities, while the automatic 4WD feature is reassuring on snowy or icy roads.

The number of details small and large that Ford has added to its F-150 is long, and you can bet that the competition is taking notes. Meanwhile, Ford's designers are hard at work fine-tuning the final details of the electric F-150. 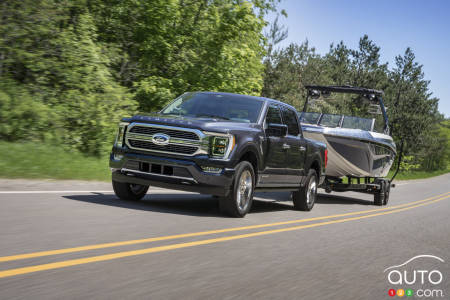 Its power
Its versatility
Its comfort and quiet ride

Ford Issues Another Recall of the Ford F-150, This Time O...

Ford has to recall just over 157,000 units of its F-150 pickup truck due to a problem with the wiper motor. That motor could potentially burn out and stop wo...

Thanks to new optional features about to be offered by Ford, loading a 2021 F-150 or a trailer attached to it, or driving it with a heavily loaded trailer, w...