Lexus as a name is known pretty much universally. The UX model, named after the abbreviation for "User Experience", is less well known. We see more of its competitors on the road, for example the BMW X1, Audi Q3, Mercedes GLA, etc.; but the UX? Not so much. Is it because this vehicle is less efficient, or less practical? Is it less dynamic than its competitors?

It’s tempting to assume that because this vehicle is not a leader in its segment, it must be lacking in some respect. But actually, no! Our week in the Lexus UX 250h was the beginning of a love story.

Let's start by positioning this vehicle within the Lexus lineup. It is of course the smallest SUV in the range, and it comes with an advanced 2.0L dynamic gasoline engine, or else with a plug-in hybrid electric powertrain; the latter is equipped with an all-wheel drive system. 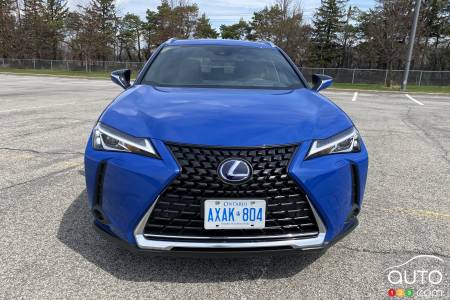 On the outside, there’s no mistaking the resemblance to its two big brothers, the NX and the RX. Which is fine, because I our view Lexus SUVs have a certain charm. While you can debate the large front grille -and many do -, the almond-shaped headlights are a nice touch and a hallmark of the brand. You can tell from afar that it belongs to the Lexus stable.

From the side, the 18-inch 5-spoke alloy wheels with black backgrounds were a perfect match for the Ultrasonic Mica 2.0 (blue) colour of the model we drove.

At the rear, the lights stretch wide across the entire vehicle and a nice spoiler overlooks it all. From the back, the UX is classy and has a sporty feel to it. It clearly stands out from its direct competition. 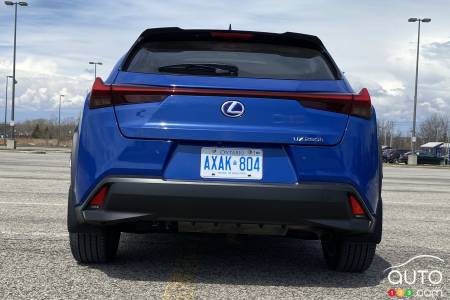 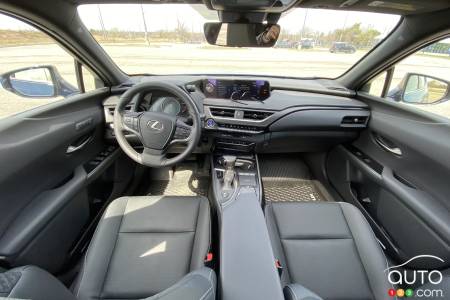 Inside, once you've settled into the NuLuxe seats, you'll find a cockpit that's truly worthy of a sports car. Disclaimer here, we're all for buttons instead of touchscreen commands where possible, if for no other reason than it creates fewer distractions behind the wheel. And here, we were happy, because there are buttons everywhere! Each button has a specific function and each is easy to use.

Of the steering wheel, we can say it has a good size hub and a rather small diameter. Better, you can convince yourself that you're behind the wheel of a sports car and not a 4-cylinder hybrid. All the controls for the radio, cruise control and Lexus Security System + are located here.

At the top of the centre console is a 10.3-inch screen (which was optional with the luxury package); you get a 7-inch screen with the base model. Underneath, the climate control buttons, and a little lower, a CD player! Yes, you read that right, a real CD player. We were surprised .... But we're not that old fashioned, we didn't use it.

Long live Apple CarPlay and Android Auto, integrated right from the base versions. To control the multimedia system, however, you have to use the touchpad, and it’s then that things can go south. We have bad memories of infuriating touchpads on other Lexus models. So much so that we usually avoided using it to change the station or what not in this UX. Fortunately there were the buttons on the steering wheel. 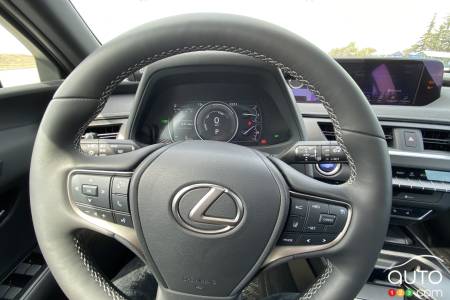 With the UX, Lexus had the good idea to separate the display control centre from the radio controls. For that, you have real buttons to control the volume and to change stations... without having to go through the touchpad. However, in fairness, we did note that the pad was much better adjusted than on other Lexus models in the past. Not once did we break out the cuss words after selecting the wrong command on hitting a small bump. Progress.

The rest of the interior impresses with the quality of finishing and materials used.  Our tester had $5,300 worth of fancy gadgets to impress us, but honestly, even with the base model, we would have been happy.

We felt good in the vehicle, thanks to the comfortable driver’s seat and the pleasant steering wheel.  The front passenger had little to complain about either since their seat is heated, ventilated and power-adjustable as well.

In the back, though, things are tight! The backrests can be folded 60/40 to increase the capacity of the trunk, which is not very large either. It's smaller than the trunk of a BMW X1, though larger than that of the Mercedes GLA and almost identical to the Audi Q3.  But this is a city car, and you’re not likely to try lugging around huge stacks of lumber or anything like that. 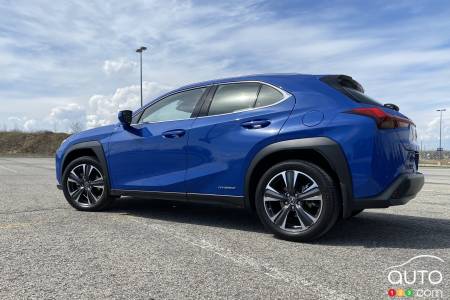 As for pricing, the base version with front-wheel drive starts at $41,060. The four-wheel-drive hybrid version starts at $42,860. This version can be had with a multitude of options that can increase the overall price by $1,100 to $8,800. The base hybrid version should be more than enough to keep you happy, however, so weigh those options properly before you buy.

Under the hood
The Lexus UX is available with a single combustion engine, as mentioned above. You can either take it straight or mix it with an electric motor, in the 250h. This version is also the only one to offer all-wheel drive.

The base engine delivers 169 hp, while the hybrid version ups total output to 181 hp. You won't be breaking any speed or power records here, but in everyday driving, the CVT associated with the hybrid version does a remarkable job. Let's not forget, we're buying this vehicle for its city smarts, not its brute athletic qualities. And Lexus has designed its UX to fulfill that mandate. Some might want more punch from the powertrain, but we fully approve of what's under the hood. Why? Well because during our week-long test drive, we maintained an average of 4.8L/100 km over a distance of 400 km, mostly in the suburbs. Easy to love that kind of fuel economy… 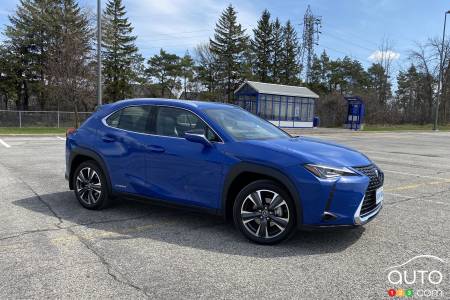 It was a good sign when, at the end of our week with the Lexus UX 250h, we felt a little pinch of regret on handing back the fob. Why the pinch? Simply because we up liked driving around in it! It's frugal and very comfortable, the feeling behind the wheel is pleasant, the accelerations delivered by the hybrid system are impressive and despite its relative dearth of horses, we never felt we lacked power.

Yes, it's a bit small, especially in the rear seats and trunk, but if you're looking for a two-person vehicle that occasionally carries passengers like children or friends and such, if you're mainly driving around town, this is one luxury sprat we'd recommend.

Lack of space on board, especially in the back
Multimedia system interface can be complicated
Front grille may be fragile 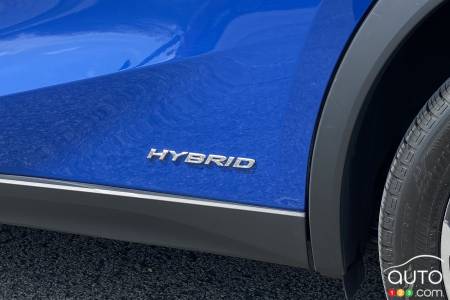 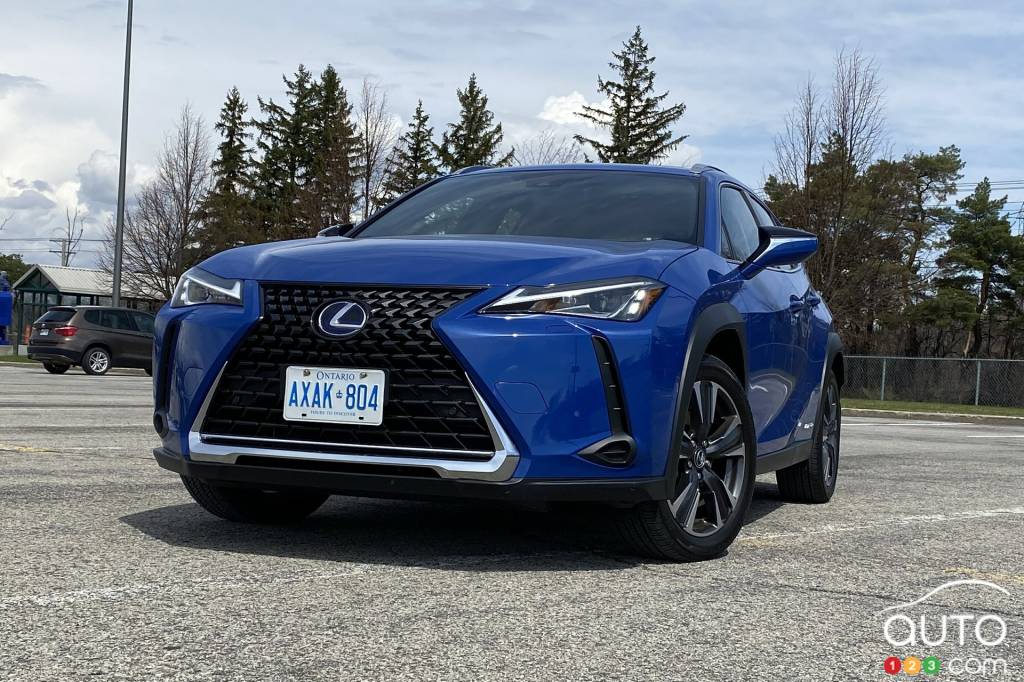 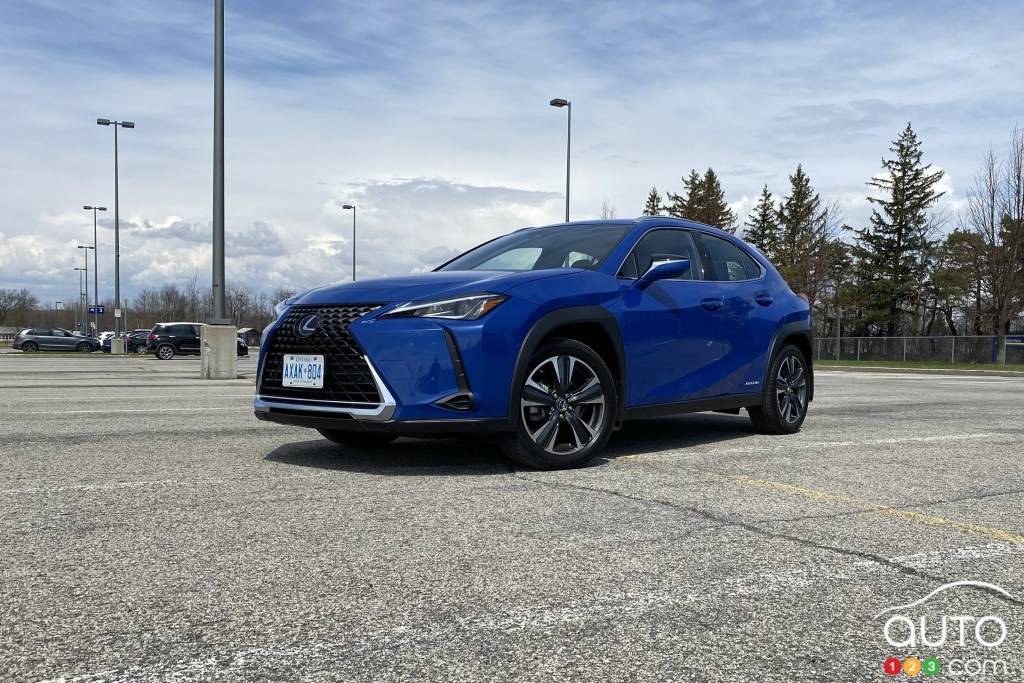 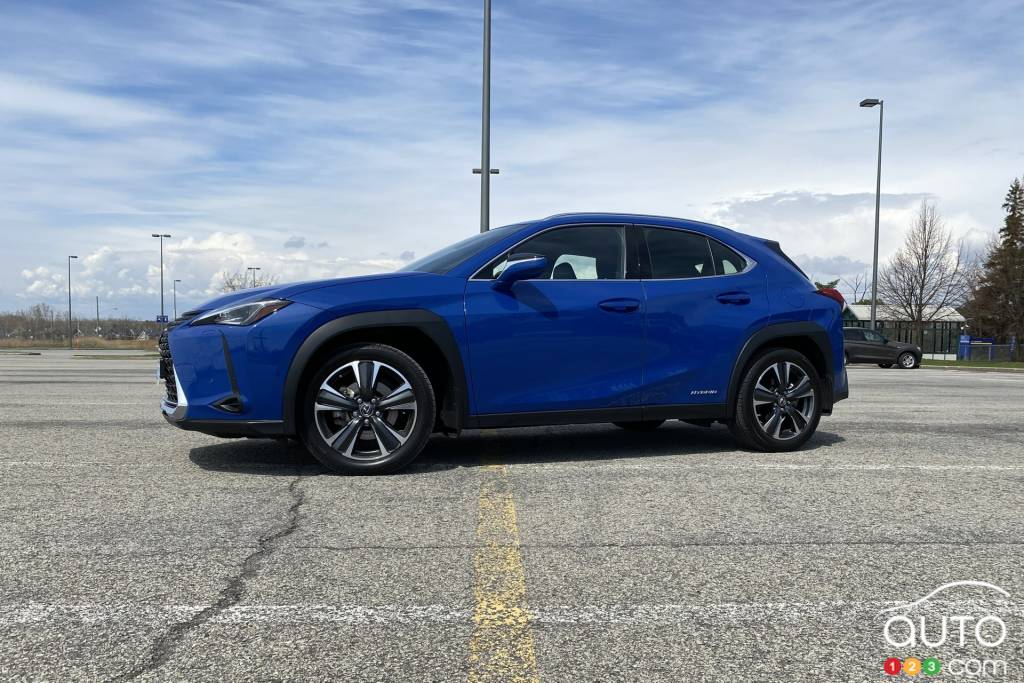 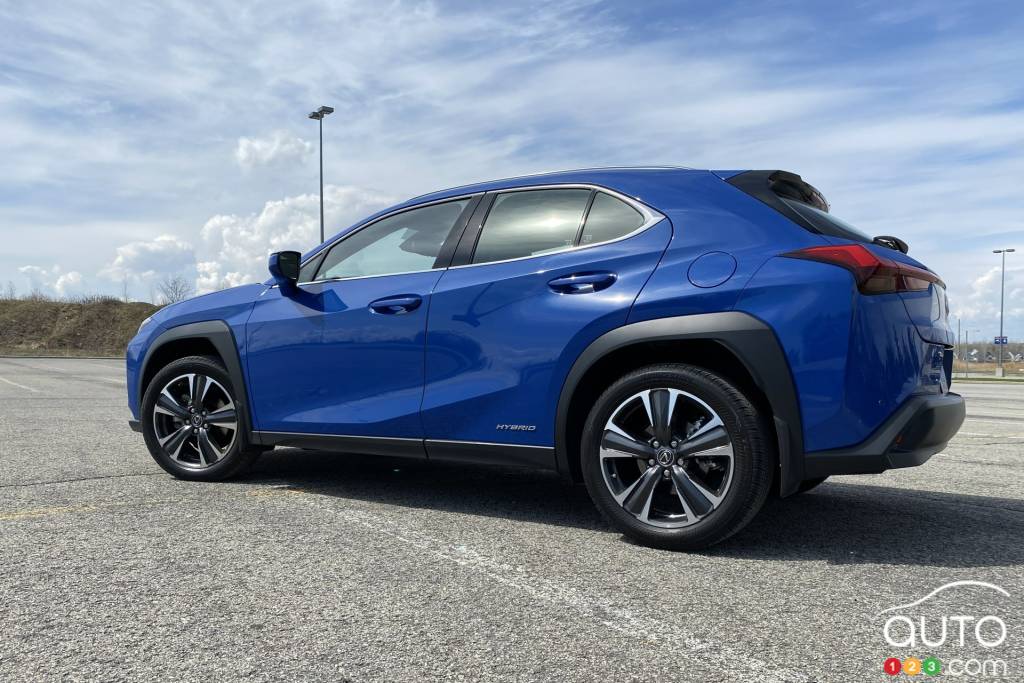 Lexus has debuted its refreshed 2023 Lexus UX 250h, which gets two new trims, features renewed styling and is priced starting at $41,450 CAD. The model is av...

The 2021 Lincoln Aviator Grand Touring PHEV is designed to take things a step further with this model, and by and large it succeeds at this. Here’s our review.