Montreal, QC – Straying from one's comfort zone. It’s something many of us had to do even if we don’t particularly want to since March 2020. That’s when a certain coronavirus first really hit the country. At least we can say it had the effect of leading many folks to surpass themselves, to band together to fight a common enemy… and yes, to push us out of comfort zone!

Which actually kind of describes what Mazda has been up to for the past few years as it pushes for ways to climb the ladder in the industry. The smaller Japanese automaker announced its intentions in 2017 with the launch of the big CX-9 model, the first in the lineup to include a premium Signature trim level. Since then, both the CX-5 and Mazda6 have received the same treatment, as Mazda seeks to position itself a little closer to the luxury end of the industry. While its efforts have bene laudable and have not gone unnoticed, the reality is there's still a little ways to go before these three models’ Signature editions seriously trouble rivals in the rarified atmosphere.

Which brings me to the 2021 Mazda CX-30 Turbo, the ideal “in-between” crossover that has quickly become a popular model with Canadian consumers, at least according to Mazda Canada's sales figures. Mazda says that the newest CX is already the third-largest selling crossover in the country, behind the CX-5 and Mazda3. Not bad for a vehicle that launched just a few months before the coronavirus brought the curtains down on the car market.

For the second year of the model, Mazda's engine manufacturers are adding logs to the fire to make it grow. And what’s been done is frankly not a surprising move, given that the CX-30 shares its architecture with the Mazda3, which can also be ordered with the 2.5L 4-cylinder turbocharged engine, the key element of this turbocharged variant.

Can Mazda compete in luxury segments?
The two more accessible versions of the CX-30 are clearly aimed at Kia Seltos, Subaru Crosstrek and Chevrolet Trailblazer buyers (to name a few), but with this injection of adrenaline and styling, the 2021 CX-30 Turbo has veered off into new territory.

The numbers speak for themselves: 250 hp and 320 lb-ft. Sounds good, but even better when you take a quick look at a few of Mazda's target vehicles - the Audi Q3, the BMW X1/X2, the Mercedes-Benz GLA, even the Volvo XC40. Fact is, the CX-30 Turbo outpowers all of them in terms of brute strength and of available torque.

What's more, at a starting price of $36,250 before applicable fees and taxes, the 2021 CX-30 Turbo represents a reasonable choice for motorist who don't feel the need the European prestige.

The only crossover that comes close to that price point is Audi's Q3 40 TFSI Komfort at $37,250, but that variant comes equipped with a 2.0L, 4-cylinder turbocharged 184-hp engine. That's less than the naturally aspirated CX-30! At the other end of the spectrum, AMG's beefed-up GLA 45 supercharger comes standard with 382 hp and 354 lb-ft of torque, but that German hot rod starts at $60,500, with no options added! The Volvo XC40 Recharge, meanwhile, offers a purely electric experience, with 408 hp under the right foot, but it commands the very tidy sum of $64,950.

The upshot of all is that the 2021 Mazda CX-30 Turbo is the brand's first true model that directly attacks the pocket luxury crossover category. Will it be able to snatch sales away from the leaders in the luxury segment? Possibly, though I have to say I doubt it. Without taking anything away from the CX-30 Turbo's design, craftsmanship and pleasurable drive, the brand's prestige level simply isn't in the same time zone as those of the BMW and Mercedes-Benz brands.

At the wheel
But, leaving aside this very real gap between the upper echelon and Mazda, the CX-30 Turbo is definitely one of the best pocket-sized crossovers available on the market today, all categories combined. I would even add this: the CX-30 Turbo is probably the best vehicle in Mazda's 2021 lineup, if you don't take into account the exquisite MX-5.

In fact, I was able to get in a drive of the 2021 Mazda3 Turbo a few days before Christmas and found in it a nice, agile, powerful and frankly well-built sports car. The problem with the 3 Turbo is that it offers a firmer suspension than the “non-turbo” Mazda3, and you feel it. Now, the CX-30 Turbo also has adjustments made to its suspension, but it is much better at dampening the uneven surfaces of our cranky Canadian roads.

And while it's not as anchored to the ground as the compact 3 because of its higher ground clearance, the CX-30 Turbo behaves like a car. The steering is precise, the 6-speed transmission does a tremendous job and there's no need to make an appointment with the chiropractor after every ride. Okay, I admit, the 3 Turbo isn't really as uncomfortable as all that, but the CX-30 Turbo is the one I'd drive away with if I had the choice.

During my test drive of the CX-30 Turbo, I didn't notice any major faults, other than perhaps the diminished, sports-car-style rear visibility and the fact that the powertrain didn't sound like the Mazda3 Turbo during strong accelerations. According to Dave Coleman, the engineer in charge of dynamics onboard Mazda vehicles, the lack of rumble is actually a production error – remember, the 2021 CX-30 Turbo has only just been introduced to the market.

So nothing serious, but still, it’ll be good to address that - buyers looking for a little more than an SUV that accelerates quickly will want some of that rumble.

I was also able to push the crossover on the highway and even a few rural roads, and it never flinched, either on pavement or snowy portions of the road. The kid in me would love a manual transmission on the CX-30 Turbo, but that's not going to happen.

The last word
This first contact with the fastest CX-30 was overall positive. There’s a clearly sporty temperament on display, but at the same time drivers can experience the same level of sedate quietude as other trims of the model by being chill with the gas pedal. The softness of the wrap-around leather seats, the superior soundproofing and the quality of the materials lining the insides of cabin are also positive points about the Mazda crossover; all are noticeably more upscale than what you get in the CX-3, for example.

You can sense that the automaker wants to distance itself from its Mazdaspeed past. In fact, when I broached to Mazda representatives the subject of the upcoming Hyundai Kona N, a pocket rocket that could certainly shake things up with its turbocharged powertrain and the lovely charge of noise coming from its two huge exhaust pipes, they told me they don't consider the Kona N a threat to the CX-30 Turbo, which they describe as “more refined” than the Kona.

Now, there again you have a company willing to exit its comfort zone. Mazda, the mass-market carmaker, is consciously retooling its products to hit a more refined space. 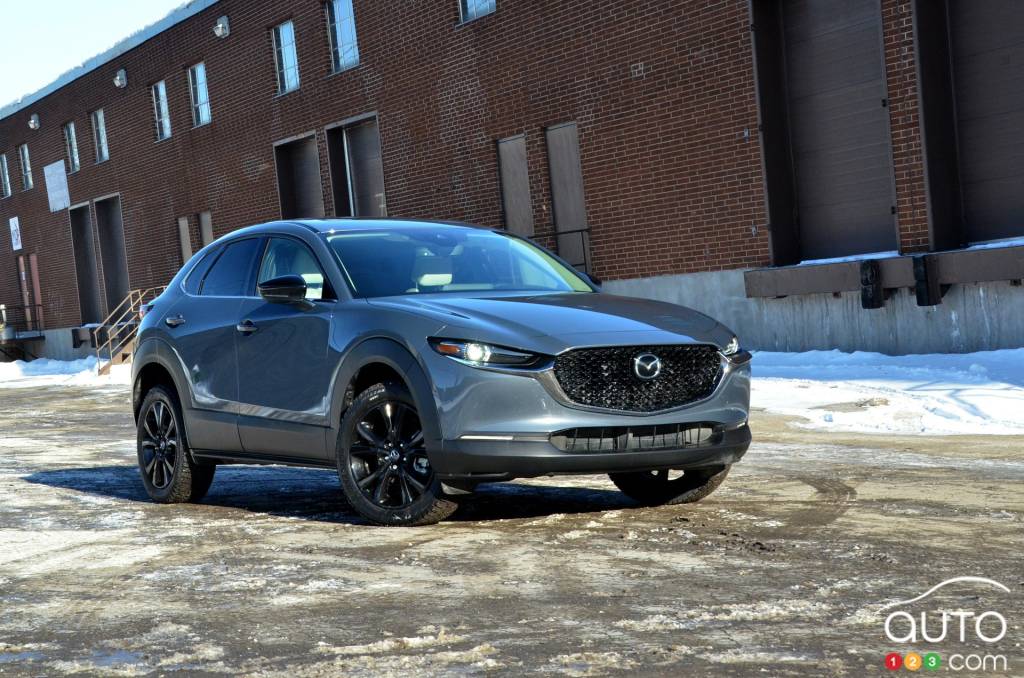 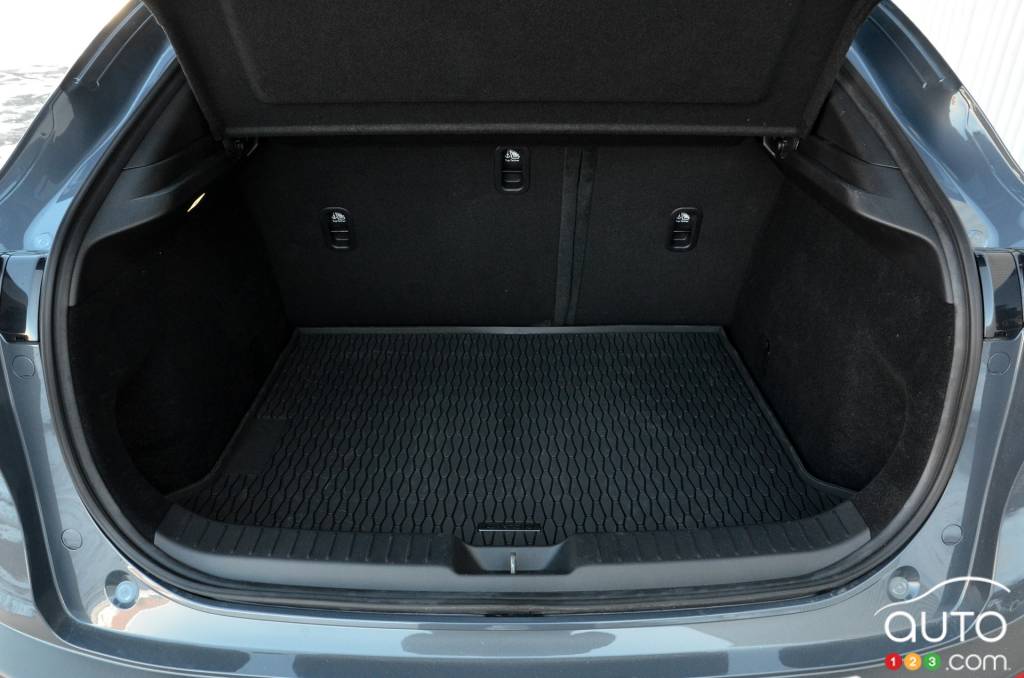 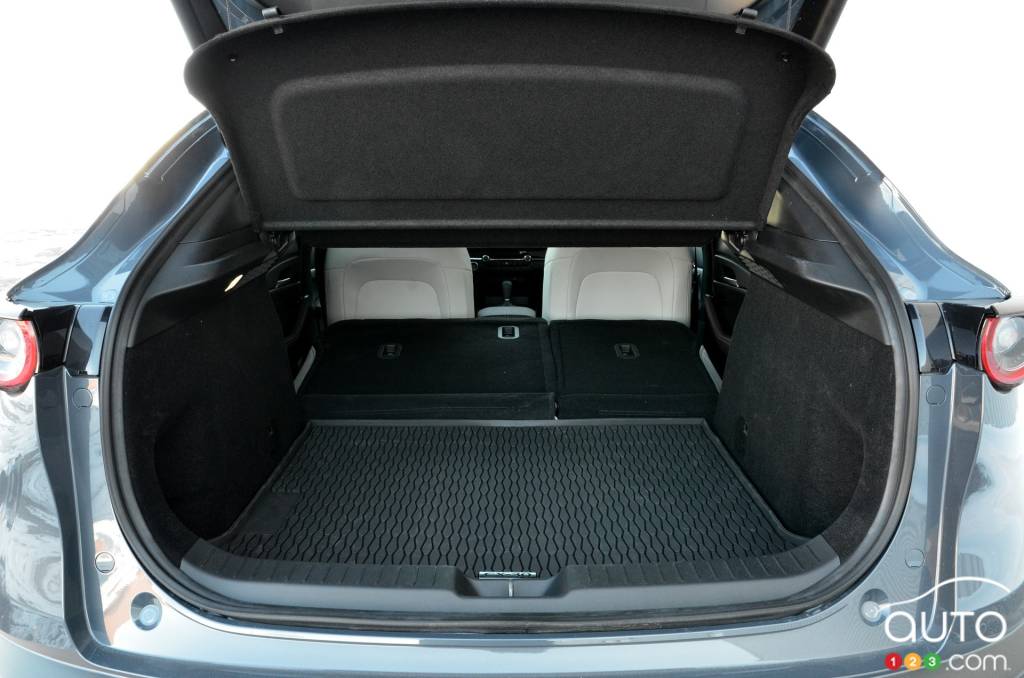 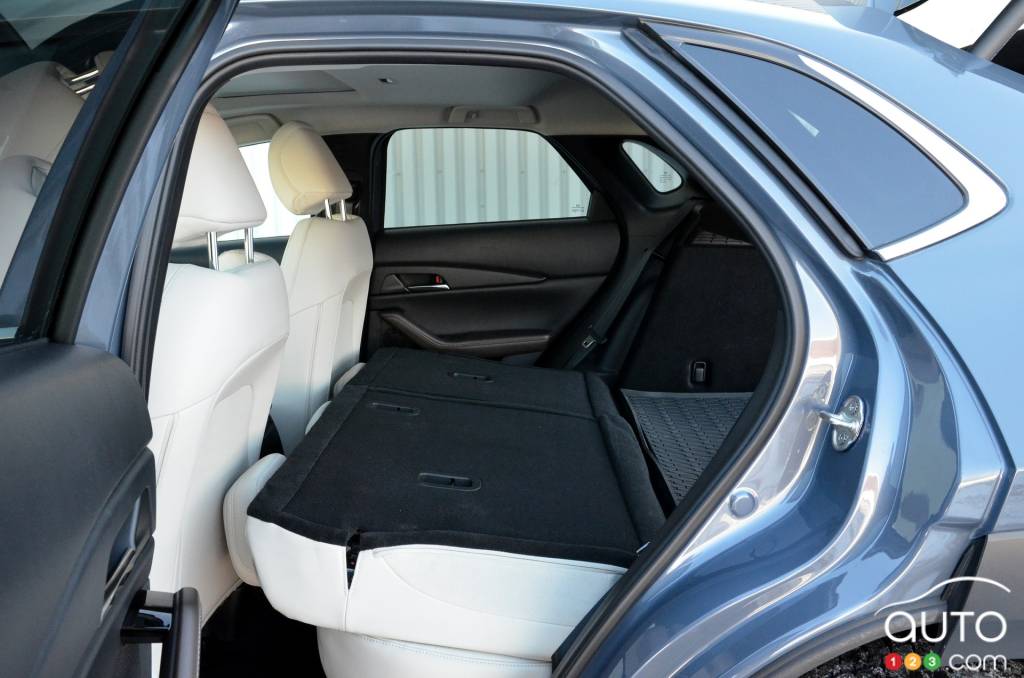 The Mazda CX-30 crossover offers some undeniable advantages over its close cousin the Mazda3, with which it shares a platform. But the surplus in size might ...

Mazda has announced pricing and details for the new turbocharged version of the 2021 CX-30. The model will sell for $36,250 or more when it debuts at dealers...

Mazda Canada has confirmed that it will offer a turbo engine configuration of the CX-30 small SUV in 2021. The 2.5L engine will deliver a maximum 250 hp.